‘Love Is the Key’: That’s the Message of a New Downtown Eau Claire Mural 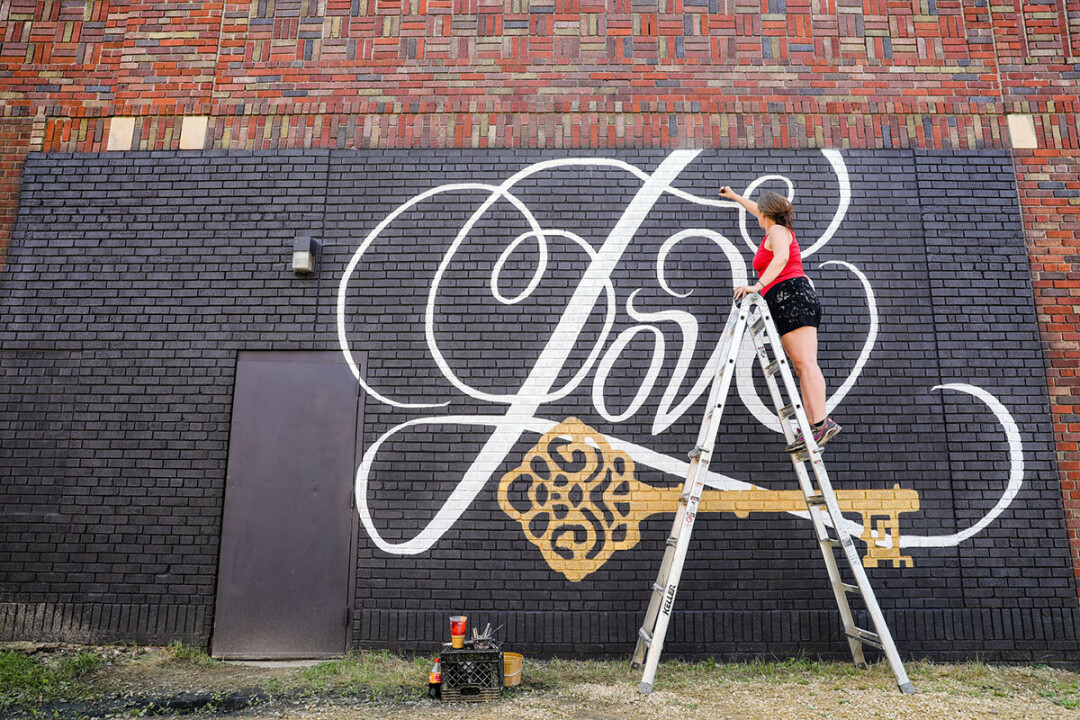 Artist Rehannah Petska has been creating a mural on the back of The Metro, 201 E. Lake St., Eau Claire.

Love is the key. Or at least according to a new mural going up on the back of The Metro, featuring a classic painting of an antique key.

“It really is the base of everything,” said Rehannah Petska, an Eau Claire-based artist who primarily painted the mural at night after working her day job at a local group home. “At the end of the day, I hope it inspires people and just makes people feel good.”

The mural was commissioned by Benny Haas, owner of The Metro (201 E. Lake St.) and The Plus (208 S. Barstow St.), who seeks to “beautify” Eau Claire through snazzy new public art. And with certainly no shortage of murals going up in the past few months, Haas is enthused for the opportunity to create a Sculpture Tour-like experience, where locals can explore downtown for new art gems, such as this new mural.

“We are an arts community,” Haas said.

Plans for the new black, white, and gold mural have been in the works for at least four years, according to Haas and Petska, though they really set to work on their vision roughly a year ago. Haas wanted to include the theme of “love” for its nonpolitical and uncontroversial message. Petska, not wanting to be overly cliché, decided to twist it to “Love is the key” with “key” portrayed by an antique key.

“‘Love is the key’ is a pretty easy topic that no one can get political about,” Haas said.

Since The Metro is a venue for many weddings, Haas wanted a hotspot for picturesque photo opportunities – which extends beyond happy couples, Petska said. Their goal is to create a new photo op for senior portraits, date nights, or casual nights out on the town.

Petska has created one other mural – located at The Rev (204 S. Barstow St.) – which she said was less of a challenge because it was a solid surface. The Metro’s exterior, however, is brick, which requires a bit more patience for the artist, who started work on the mural at the beginning of August. But, with her passion for the art of lettering and calligraphy, Petska appreciates the learning experience.

“Everything in life is art,” she said. “And you can make everything artistic. And that’s kind of the way that I am.”