‘It’s a place to unwind and be yourself,’ co-owner says 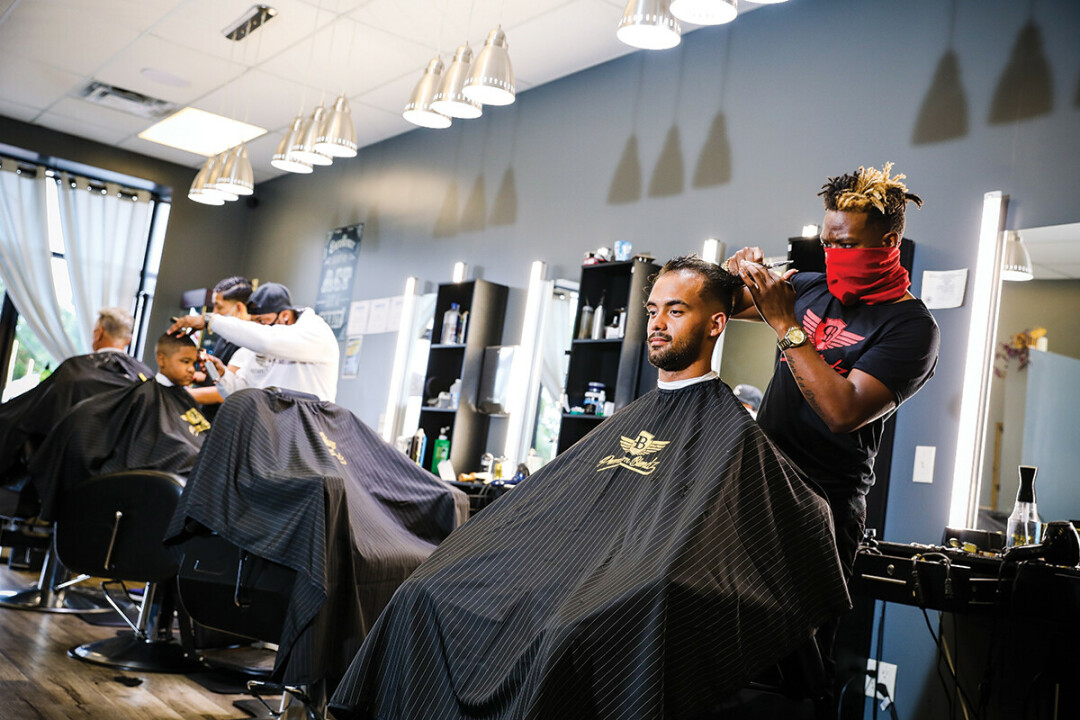 ROLL THE CLIP. Navontay Wilson, owner of Premium Blendz Barber Lounge (top right), starts off each day at 4am with a workout and some yoga. Then, he sets to work.

When Navontay Wilson was younger, he frequented H. White Men’s Room – a barbershop in north Minneapolis. There, he learned a lot about life and found role models to look up to.

“I just learned so much, you know?” Wilson said. “As far as what being a man is about. It was one of the strongest examples of what a man is in my life, is going to the barber shop.”

When he opened his barber lounge – Premium Blendz – in February 2019, his number one mission was to make old-school barbering the new standard. “I think about it every day,” he said.

Wilson always knew he would be a barber, but he planned to curtail being a “broke college student” by first becoming a barber, then pursuing his career. “I fell in love with the craft, and I haven’t looked back since,” he said.

“Everything is open, and everything is real. It’s a place to unwind and be yourself.” –Navontay Wilson, co-owner, Premium Blendz Barber Lounge

He attended Park West Barber School in Durham, North Carolina, in 2013, where he worked full-time as a busboy, then as a waiter. After two years of juggling school and work – all while crashing on his sister’s couch each night – he graduated. He moved to Eau Claire a little over three years ago and worked at a barbershop located in Oakwood Mall, where he met the future co-owner of Premium Blendz. Adapting isn’t something that’s new to Wilson: He attended 12 different schools when growing up. Security and stability weren’t exactly a trademark of his childhood, he said. But, it’s one of the reasons why adaptability is one of Wilson’s best skills – besides barbering, of course.

“A lot of people feel stuck in certain places,” Wilson said, “and it’s like, it’s really not hard to get up and go and start over.”

He was recently featured at a Power of Perception seminar, where he shared his experience in starting a business and his work as “Tayblendz” – which also serves as the handle for his social media.

“That was an amazing experience,” he said. “I definitely saw myself in a lot of those kids, so I just tried to give them the knowledge and the things that I wish I knew when I was their age. I just try to be that person that I kind of wish I had growing up.”

And he wants Premium Blendz to be like the barber shop he frequented as a child, with a warm and welcoming environment. He calls his clients the “Blendz fam” because of the tight relationships he forms with people.

“Everything is open, and everything is real,” Wilson said. “It’s a place to unwind and be yourself.” 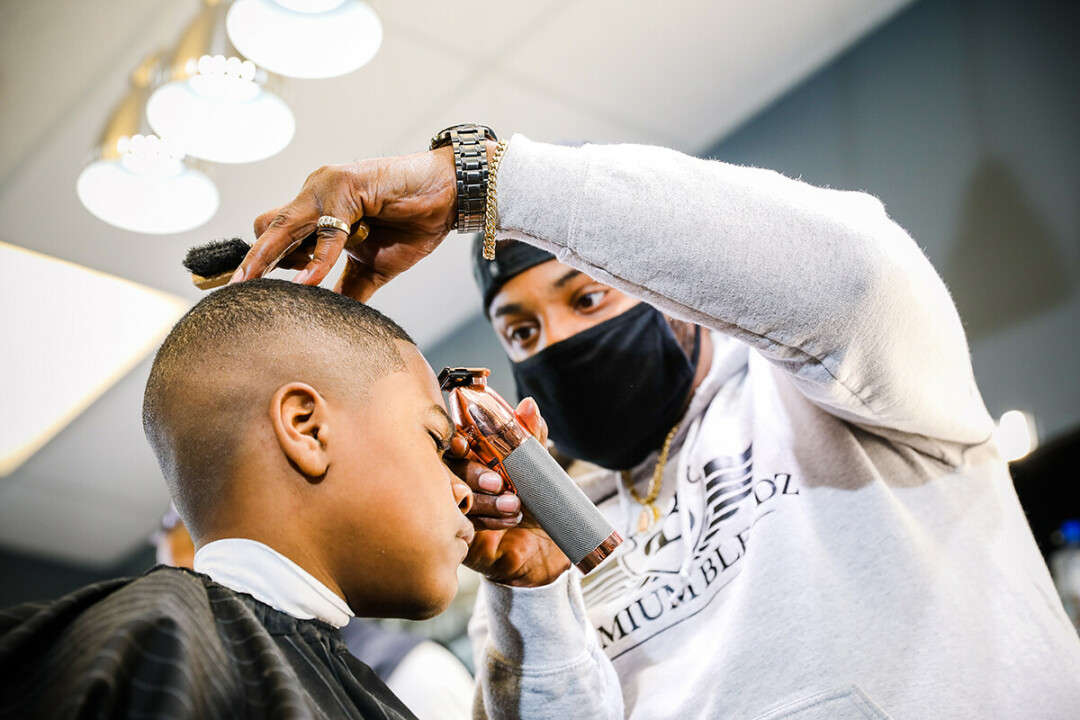 “We love Premium Blendz,” said client Anne Woolover. “We had been on the hunt for a barbershop that understood the dynamics of African American hair. Not only do Johnny (co-owner) and Navontay do an amazing job, they treat my son just like one of the guys. He looks forward to his haircuts now.”

Each morning, Wilson starts his day at 4am, heads to the gym to work out, showers, and then gets ready for his day. He often does a little bit of yoga, meditates, and grounds himself for his day. “My mornings are definitely my sacred time,” he said.

Then, he heads down to Premium Blendz and prepares for his workday. He sets the mood by burning various incense, turns on some hip hop, R&B, soul, or old-school music, gets fresh towels, and sets up the pool table. Then, his clients trickle in – often joining in mid-conversation.

“Half of them don’t even get a haircut,” he said. “They just stop by and chat just to get that escape from the chaotic world that we live in right now.”

For more information about Premium Blendz – or to book an appointment – check out premiumblendz.com. 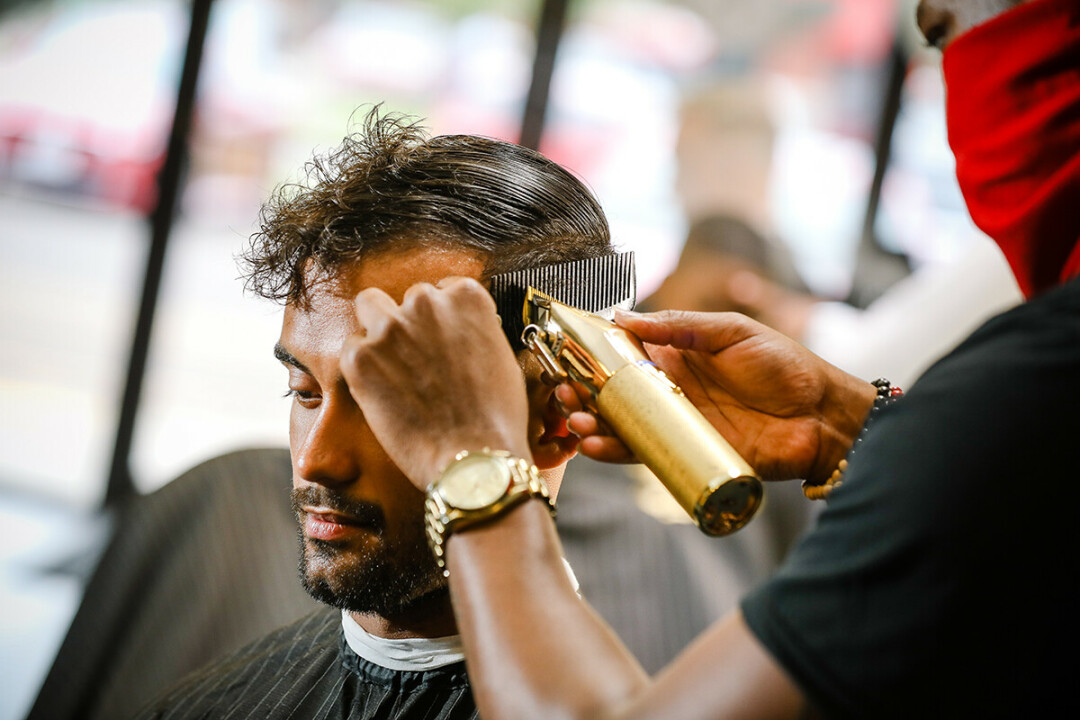