'This is still happening,' one muralist says. 'It's not necessarily gotten better.' 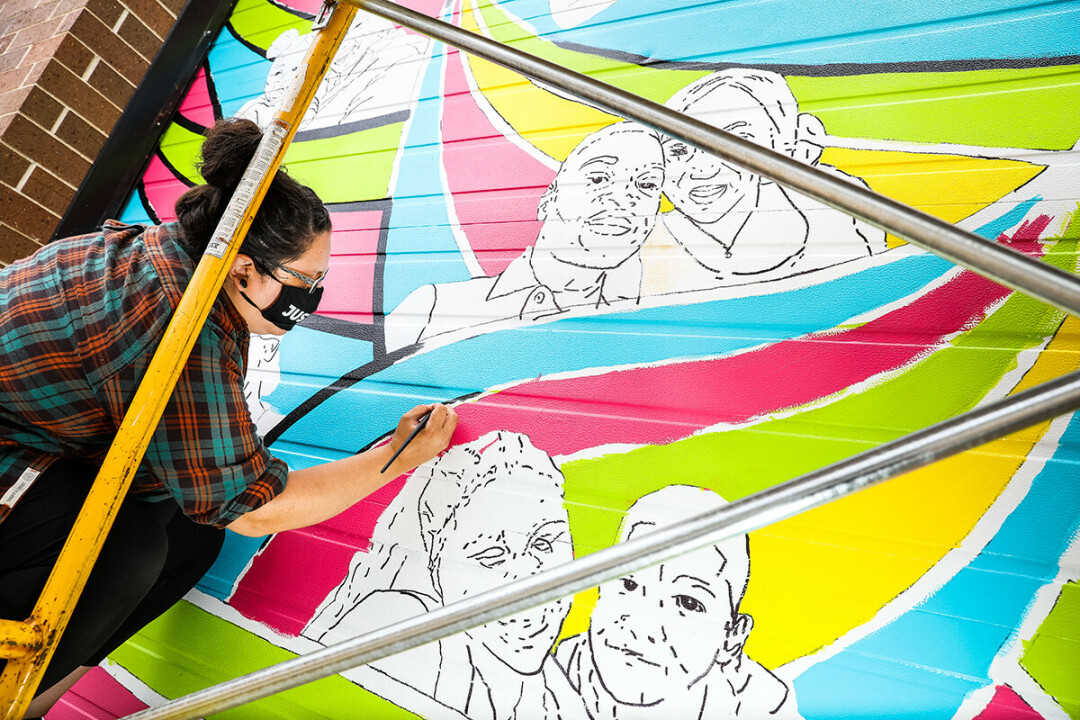 So reads the artist statement of Brittany Tainter, the artist behind a new Black Lives Matter mural located on The Lismore garage doors near the corner of Farwell Street and East Grand Avenue.

Tainter is the owner of Giizhig Design Co. in Eau Claire and a Lac Courte Oreilles Ojibwe artist.

“Going into it, I knew that people would have very strong opinions about it one way or another, and we can obviously see that with the passersby just stopping and giving us their opinions,” she said. “But what kept me going is keeping in mind that this piece isn’t necessarily for everyone else ... at the very heart of it – it’s for us. It’s a way for us to heal together and to process everything that’s been going on.”

“What kept me going is keeping in mind that this piece isn’t necessarily for everyone else ... at the very heart of it – it’s for us. It’s a way for us to heal together and to process everything that’s been going on.” –Brittany Tainter, muralist

The now-completed mural features the faces of Eric Garner, Philando Castile, Tamir Rice, Breonna Taylor, George Floyd, and Ahmaud Arbery, as well as Emmett Till, Dominique “Rem’mie” Fells, and Marsha P. Johnson, and their loved ones – though they remain in black-and-white as an intentional choice, according to Tainter.

“I wanted the difference of that against the really bright colors to show that when we lose these folks in the world, the world is losing a part of itself and a part of its color,” Tainter said.

Tainter and Brooke Newmaster – an organizer of a local Black, Indigenous, People of Color group composed of 10 individuals in the Eau Claire community – began the mural in early July after feeling the need for some type of artwork to unify their mourning over the murder of Floyd, particularly given that these kinds of deaths are nothing new in the U.S. 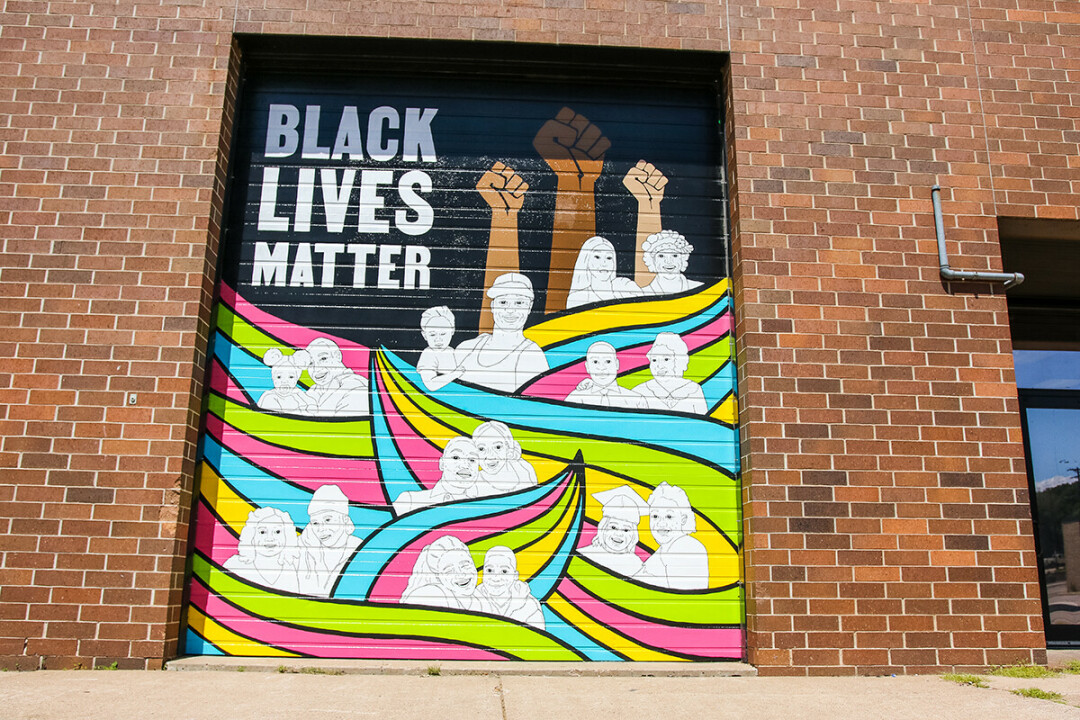 The group assembled in an effort to support the local BIPOC community and would like to push for more BIPOC-created art. The mural is in partnership with The Lismore and the Pablo Group, who helped Tainter and Newmaster prime the garage doors in early July, symbolically paving the way for BIPOC voices to be amplified, Newmaster said. On July 15, they projected their design onto the doors to trace, then filled the artwork in with bold green, pink, blue, and yellow paint. Among the individuals helping was Antoine Hill – and his 9-year-old daughter, Carolina – who helped paint and offered tips to Tainter.

“As an African American father, I wanted to let my daughter to know that these events have been happening and that you can make a difference in the world and help do your part as well,” Hill said in an email. “And that these faces could be us.”

The owner of Premium Blendz Barber Lounge in Eau Claire, Navontay Wilson, also offered advice and helped out. Wilson was born in Minneapolis and frequented the same store where Floyd was murdered, and so he has been a voice in full support of the mural.

“This is a representation of a voiceless community that America has chosen to ignore,” Wilson said.

It seems no one can ignore the mural, as the pair has already received harassment and critical comments from the public over the art. But, Wilson said they have also found people who appreciate the mural, honking as they pass and complimenting the artists.

Despite the curiosity from the public, the art isn’t there for others; it’s a way for this BIPOC group to collectively mourn and join together.

“I just wanted the mural to represent unity and community,” Wilson said.

“Hopefully we come together and keep doing things, and supporting each other, and showing up for one another, always,” Newmaster said. “There’s no finish line. We just have to keep going.”

For people interested in contributing to mural expenses and future BIPOC art-making in the Chippewa Valley, visit the Premium Blendz Barber Lounge website at www.premiumblendz.com for a donation link.