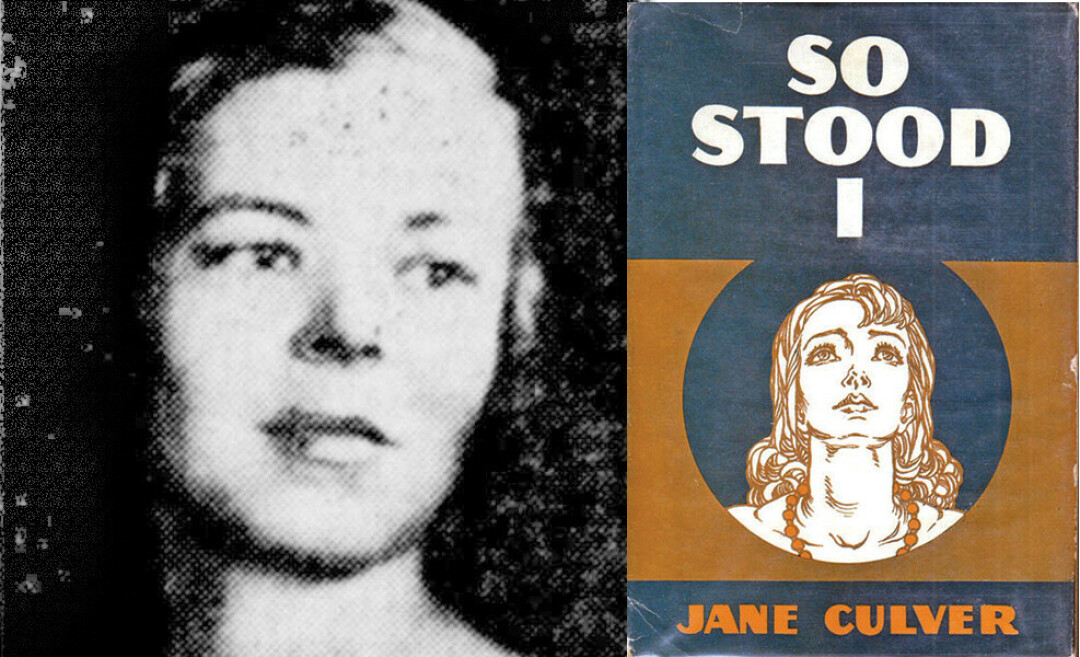 THERE SHE STANDS. Eau Claire native Jane Culver (from a 1934 Wisconsin State Journal article) and her novel, which was published that year by Houghton Mifflin.

As Chippewa Valley residents, we have become accustomed to having a lot of noted authors in our midst: Nickolas Butler, Michael Perry, John Hildebrand, B.J. Hollars, and I could go on and on.

However, that was not always the case. In 1934, a book was released in New York that caused quite a stir in the Eau Claire community.

So Stood I by Jane Culver was published by Houghton Mifflin in 1934. Culver, who was known as Mary Jane in Eau Claire circles, spent the first 18 years of her life in the city. Her parents were both born in Eau Claire. Jane’s father Joseph was a real estate professional. Her mother was the former Mary McDonough. Jane grew up in two houses in Eau Claire: 312 Jefferson and 600 Oak Place. Culver had other relatives still living in Eau Claire as well, namely the Wickams and the Welches.

Her parents left Eau Claire for Florida and then moved to Akron, Ohio. Jane attended Columbia University. She lived in New York City but spent summers with her parents in Akron.

According to a New York Times review, the book “introduces a writer of amazing maturity and imaginative understanding.”

It took her four years to write So Stood I. She said that many Eau Claire residents might recognize themselves in the book, but I never could find any accounts of people who did so.

This was her first novel, which she wrote using the stream-of-consciousness method made famous by James Joyce. The title of the book was taken from one of Emily Brontë’s poems.

According to a New York Times review, the book “introduces a writer of amazing maturity and imaginative understanding. It is a psychological novel, the experiences in the growth of a soul, from childhood, characterized by poetic imagination, keen emotional values and a cloak of fear – through adolescence, colored by the changed fortunes of the family.” The heroine, having a religious conflict with her father, and realizing that her mother had a flawed, frivolous temperament, turns to her brother for love and understanding.

It sounded so dramatic that I was surprised to read Margaret Cheney Dawson’s article from the New York Herald Tribune who said the “virtues of her writing are abundant and tangible. It has a great personality, a flair for the newly bright, eye-opening phrase and frequent passages of delightful humor.”

The book was available for sale in the Eau Claire Bookstore where it sold very well. Another book that became available at the bookstore was a mystery by Thomas Polsky in 1939. Culver and Polsky had married in 1936. After attending Harvard and the Sorbonne, he began his writing career at a newspaper in Akron before transitioning to writing novels full time. The couple lived at a writer’s colony in Weaverville, North Carolina, near Asheville. Polsky published his mysteries throughout the 1940s and early ’50s. Culver’s book is available for check-out at the L.E. Phillips Memorial Public Library in Eau Claire, and Polsky’s books can be found on Amazon and other out-of-print houses, but be prepared to pay $30-$600 for them.