a juicy tale of a missing phonograph maker, a burned body, and a lot of insurance money 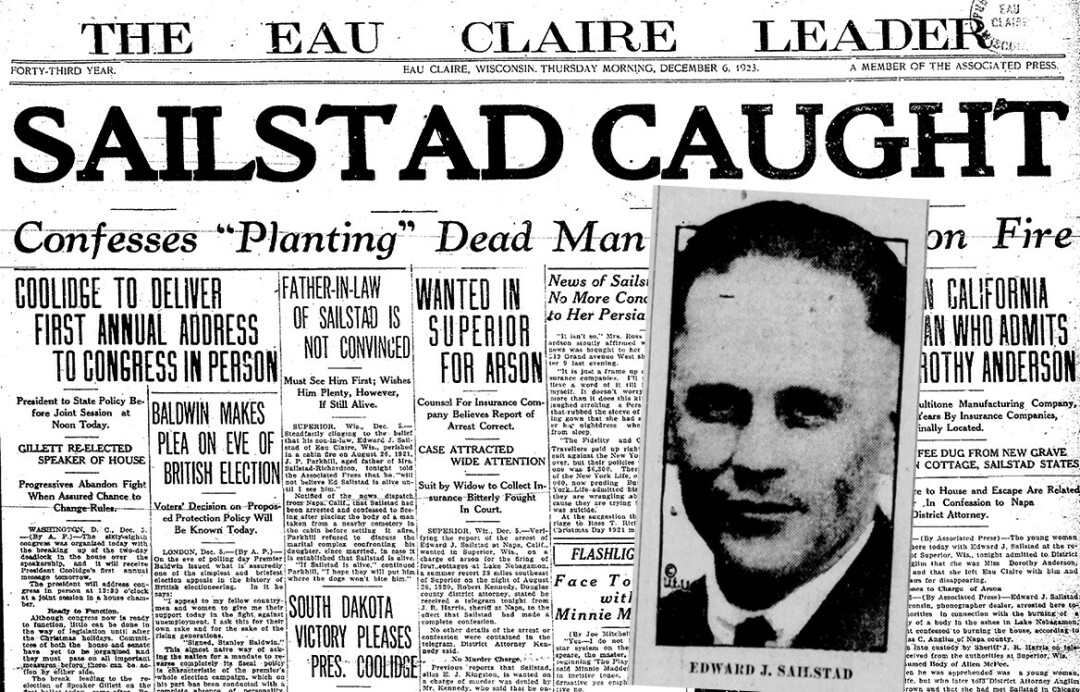 In 1919, Edward J Sailstad was living at 415 Jefferson St. in Eau Claire with his wife, Leona. A year later, he was involved in a soap opera-style scandal that shocked his friends and coworkers and resulted in a national manhunt.

Sailstad was co-owner of the Sailstad-Payson Piano Co. in 1918 when he designed a new phonograph. He opened a factory at 1300 First Ave. Sales were increasing, and the company was producing 100 phonographs a day.

In August 1920, Sailstad left for a business trip to Duluth, planning on renting a cottage on Lake Nebagamon to fish for a couple of days. A tragic fire occurred that weekend. His charred body was found in the rubble, and three adjacent buildings were destroyed. A funeral was held for him on Aug. 30.

Sailstad’s life had been insured for a total of $56,000 (that’s more than $800,000 today) with an additional policy to the company. Several insurance companies paid out the funds, but one decided it wanted more evidence. An investigation began. The charred remains were tested, and authorities determined that they most likely did not belong to Sailstad. As the company conducted its search, more facts emerged.

Sailstad had hired a woman named Dorothy Anderson as his stenographer. She moved from Chicago to Eau Claire for the job. Dorothy was often absent from work when her boss was traveling out of town. Dorothy told several employees she had visited her sister in Chicago where she met a salesman she eventually married. She then packed up her belongings to head for Chicago on Aug. 9, but it was determined that she instead moved to Willow Street in Chippewa Falls under the name E.J. Kingston. Forrest Bateman remembered a couple who fit the description of Dorothy and Edward asking him about where new soldiers’ graves were located at the Goetz Cemetery.

Apparently Dorothy went with Edward when he left for his business trip and vacation at the rented cottage. A neighbor near the rented cottage reported seeing Sailstad carrying a box into the cottage the night of the fire. A couple was seen running to the railroad after the fire started. A taxi driver, Frank Thiery, said Dorothy and Edward paid him $20 to come and get them at the railroad near Lake Nebagamon and take them to the Duluth area. They had transferred their trunks to the American Express office in Duluth before they set the fire.

In 1923 someone who knew Sailstad reported he had sighted Edward and Dorothy living in Eureka, California; they were both arrested. They pled guilty to arson and admitted that the remains in the fire were dug up from a local cemetery and belonged to a man named Allen McPhee. Edward served a four-year sentence at the Green Bay Reformatory with Dorothy serving a similar stint at Taycheedah. When they were released from prison, they married and moved to Oshkosh where he made a living repairing typewriters.

The company did not survive the scandal. It was determined in 1920 that $50,000 was missing, and they went into bankruptcy, paying $.07 on the dollar to creditors.

Leona, assuming Edward was indeed dead, married Ross T. Richardson in December 1921. They had to divorce and remarry once Sailstad was found to be alive. The court said she was able to retain the insurance premiums paid to her when her husband was declared dead.

Did the story at least have a happy ending? Nope. Edward and Dorothy divorced by 1940. Edward moved to Litchfield, Minnesota, and sold refrigerators. He passed away there in 1973.