Teen Reels in a River of Memories Wisconsinites go fishing for a variety of reasons – as a pastime, for recreation, or for a chance to enjoy nature – but for 15-year-old Eau Claire resident Caspian Hebert, fishing is a passion.

I first met Caspian early on a snowy March morning at the confluence of the Chippewa and Eau Claire rivers, just across from the Pablo Center. After bicycling down to the water’s edge laden with a five-gallon bucket of chubs caught in the Little Niagara Creek, three stout poles, and a backpack of fishing gear, Caspian had been watching his rod tips for the gentle twitch of a bite since 7:30.

Hooked into fishing by his father and grandfather at the age of three, Caspian has become something of an expert on angling in the Chippewa Valley. “I started fishing by myself at about the age of 12 and spent a lot of time exploring Half Moon Lake; I figured out all the holes, weed lines, and all the places the fish like to sit there, usually fishing from shore.” Since then, his range has expanded to Lake Eau Claire, Dells Pond, Lake Altoona, Coon Forks, and just about any stream, mill pond, or lake in the area.

I had to wonder what would draw a young man like Caspian out on this runny-nose morning during spring break when many of his classmates were probably sleeping in. “I think what keeps drawing me back is the passion, the feeling that, hey, I might catch somethin’ big today, I might make a memory today,” he said. “Whether it’s subzero or 100 degrees, it doesn’t matter, I’m always out.” 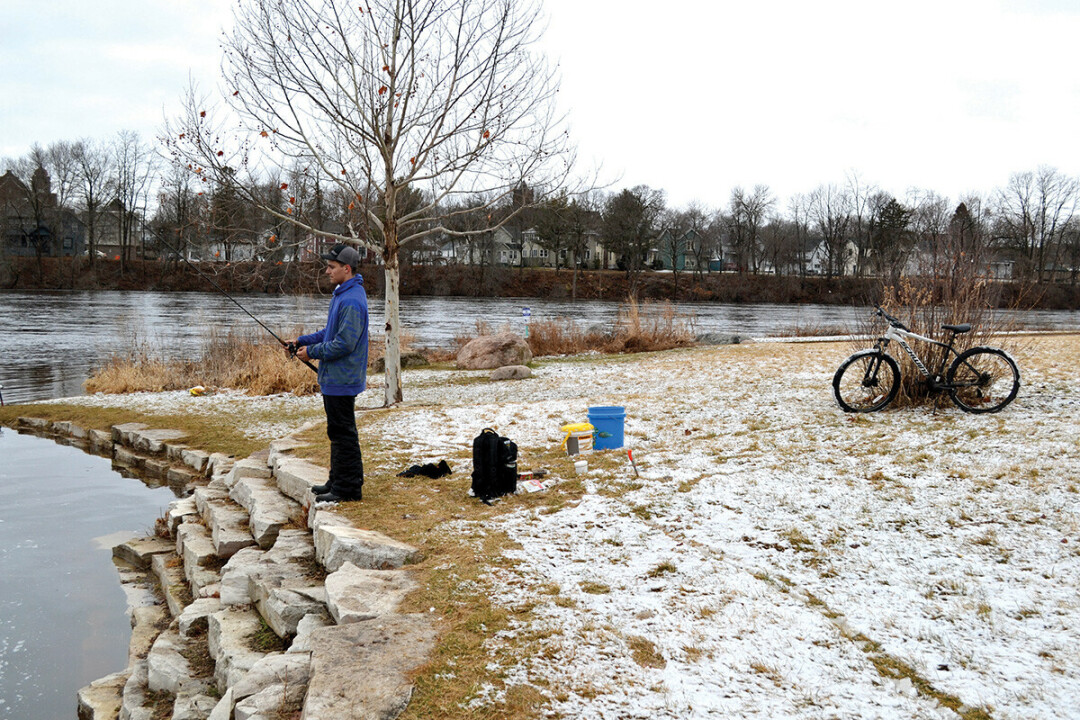 “I think what keeps drawing me back is the passion, the feeling that, hey, I might catch somethin’ big today, I might make a memory today.” –Caspian Hebert

Speaking of making memories, Caspian showed me a photo of a 56-inch sturgeon he had caught just a few days earlier, then another of a 55¾-inch sturgeon he had landed a day later. Both fish were around 30 pounds. When he’s fishing at the confluence, Caspian says he uses heavy gear, with 30-50 pound test line and circle hooks baited with chubs and nightcrawlers. Caspian estimated the swirling eddy at the confluence is probably around 35 feet deep and said, “You never know what you might catch here: sturgeon, walleyes, crappies, drum, carp, catfish, bass.”

“A guy caught a big brook trout right across the river here yesterday, and I heard someone had caught a paddlefish,” he added. “It wouldn’t surprise me to even see a gar.”

Caspian doesn’t generally keep the fish he catches. “I’m big into catch and release, especially with sturgeon, since they’ll probably live longer than I ever will,” he said. (Sturgeon can only be taken in a fall season with a special tag and can live as long as 150 years.) He will take legal-size walleyes and pan fish from the river in season. 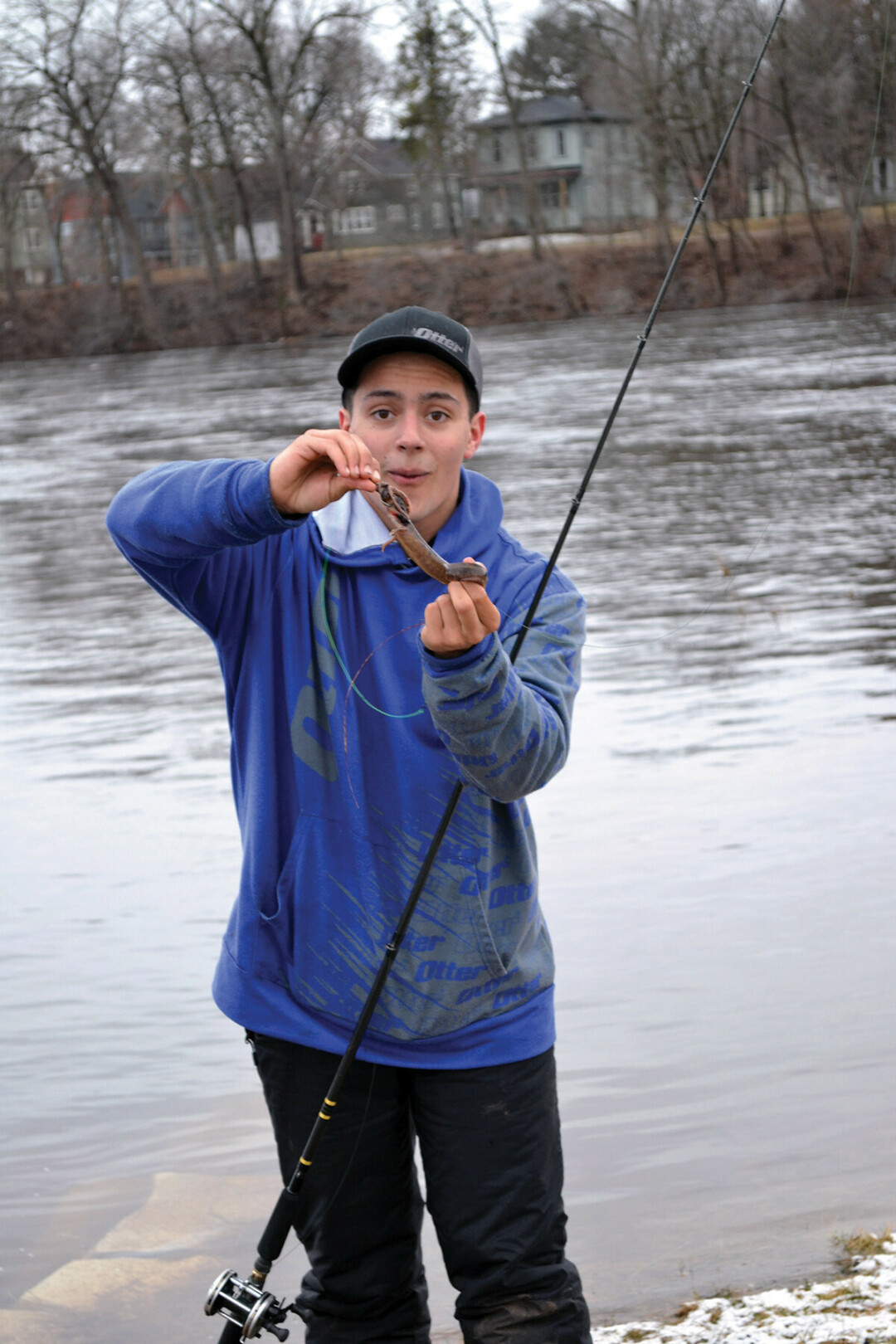 Though Caspian didn’t catch anything more than a little mud puppy as we talked, he related some of his favorite memories, including a tale about hooking a 45-inch muskie from the Grand Avenue pedestrian bridge while fishing for walleye with a jig and 6-pound test line. He had to walk the fish across the bridge and down toward shore, where he landed and gently released the monster. He also recalled catching a huge largemouth bass on Half Moon Lake after it snatched a little crappie he had on and refused to let go. He said there have been days at the confluence when the freshwater drum (also called sheepshead) were biting so well he couldn’t put the rod down. “There must have been a thousand in some of those schools,” he said.

Even if the fish aren’t biting, Caspian says he always enjoys being on the water. As we watched a pair of Canada geese poking around the shoreline, he said he likes seeing the wildlife and the natural scenery: “It’s relaxing, too.” When he can’t be fishing, Caspian studies outdoors magazines and watches YouTube videos on his favorite sport. He also uploads his own videos and photos on social media.

“Start with quality gear, not a Snoopy or Barbie Deluxe pole. Just have fun: Fishing isn’t all about just watching a bobber go down, it’s about making memories with your friends and loved ones.”

Caspian knows most of the anglers who come down to the river, and there is a loose-knit community at the confluence who’ll lend a hand when needed. Without the help of one his buddies, Evan, it would have been pretty hard to beach those sturgeon, he added.

To anyone considering getting into fishing, Caspian offered this advice: “Start with quality gear, not a Snoopy or Barbie Deluxe pole. Just have fun: Fishing isn’t all about just watching a bobber go down, it’s about making memories with your friends and loved ones. Also, pick up your garbage, PLEASE!” He said he gets infuriated to see trash left behind, around Half Moon Lake in particular.

Caspian says his future goals include organizing a fishing team at Memorial High School, though he’s had no luck yet finding an advisor. Already sponsored by two or three tackle companies, after high school he’d like to compete as a pro on the Major League Fishing tour, to work some way in the fishing industry, or go to school to work for the Department of Natural Resources. For now, he gets in as much time fishing as school and sports will allow.