When King Came to Campus

as part of UWEC’s Forum series, MLK spoke about the evils of segregation in 1962 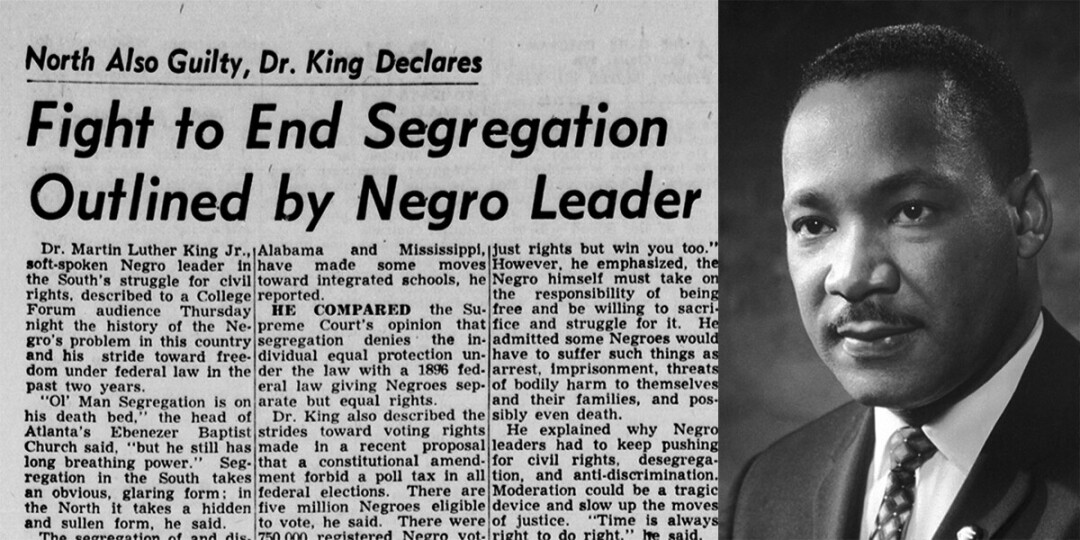 A 1964 portrait of Martin Luther King Jr. superimposed over a newspaper clipping of his 1962 speech in Eau Claire.

Amid his travels around the globe speaking about the harms of segregation and advocating for civil rights, the legendary Dr. King spoke to Chippewa Valley people on March 29, 1962.

While he applauded the work that Northerners had done to sully segregation, he also didn’t let them off the hook for their part in the oppression of Black people. He explained that while the South’s segregation is blatant and obvious, the North still used segregation more discreetly.

According to an article in The Daily Telegram the following day, Dr. King expressed to other Black people that to be free they must be willing to struggle with the potential pitfalls and sacrifices that may need to be made. But when it came to desegregation, Dr. King put the bulk of the responsibility on community and government leaders.

We will also so to your hearts and conscience that we will not only win our just rights but win you, too.

SPEAKING TO AN AUDIENCE IN EAU CLAIRE, 1962

He then spoke about his meeting with President John F. Kennedy and their conversations about passing an executive order declaring all segregation unconstitutional under the 14th Amendment. Dr. King spoke of his plans to submit a document outlining this order to the president within the next few weeks from his speech.

“We will also so to your hearts and conscience that we will not only win our just rights but win you, too,” Dr. King said.

The gymnasium where Dr. King spoke was filled more than usual and he received a standing ovation after he finished. His speech was a part of UW-Eau Claire’s Forum Series, which began in 1942. Over the course of 79 seasons, the Forum has brought influential figures from the Civil Rights Movement and many other fields to campus, including the likes of Maya Angelou, Richard Nixon, Ralph Nader, and many more.