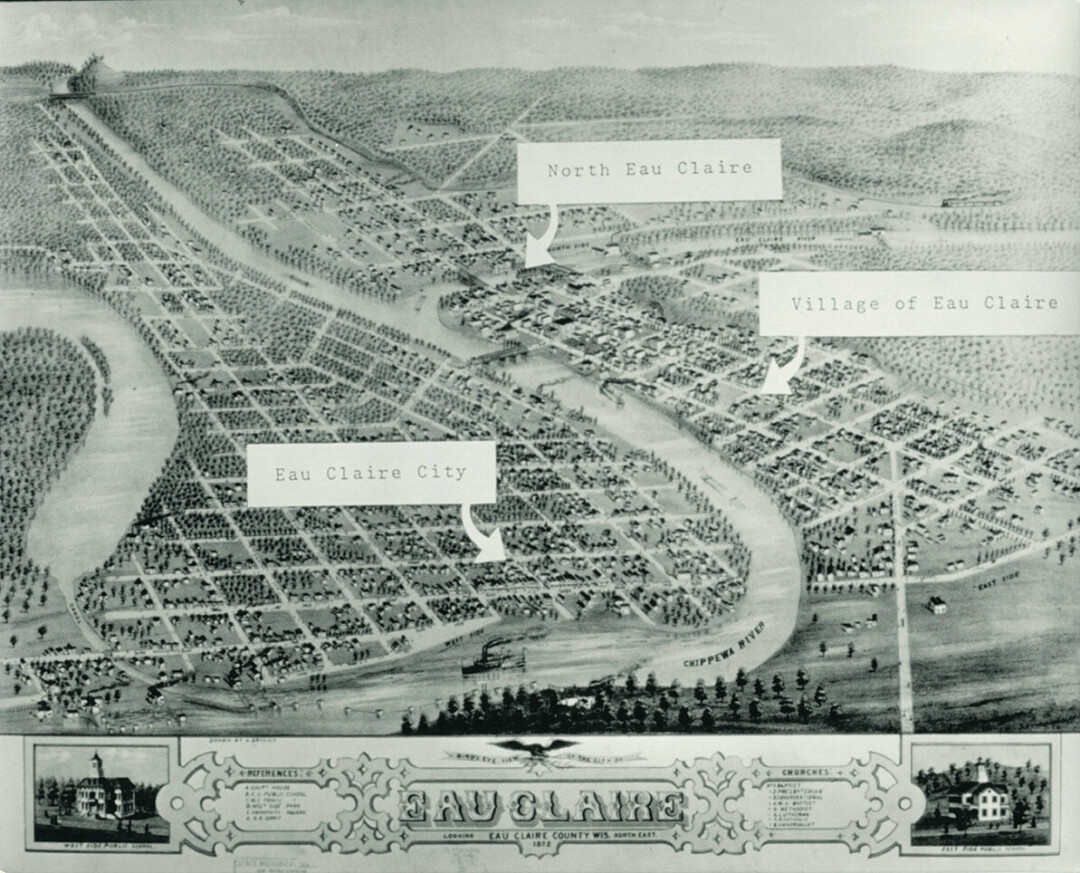 A BIRD'S-EYE VIEW. This circa 1872 map of Eau Claire shows the three villages – to the north, west, and east – that merged to form the new city. (Chippewa Valley Museum)

Why do we celebrate Eau Claire’s birthday on March 19? If you’re inclined to answer, “Because that’s when the city was founded,” then you’re essentially right, although the full story is more nuanced than that. Nailing down a birthday for a community is a little harder than doing so for a human being: Cities are not born, they are made.

The first humans came to the Chippewa Valley an estimated 10,000 years ago. Move closer to the present, and what is now Eau Claire was on the borderline between the ancestral homes of the Ojibwe and Dakota peoples. Gradually, Europeans – mainly French – passed through to trade with the Native Americans. The first white people to live in what became Eau Claire for any length of time where the family of French Canadian fur trader Louis DeMarie, who lived in a cabin on the west bank of the Chippewa River during the winter of 1832. But a cabin doesn’t make a city.

OLD TIME EAU CLAIRE. The view of Eau Claire's east side, at the time known as the Village of Eau Claire,  in 1868. (Chippewa Valley Museum photo)

Soon the villages grew together, literally and metaphorically, connected by bridges, a growing economy, and a desire to build a dam at the Dells of the Chippewa River, which would help the logging industry.

And so, on March 2, 1872, a bill to incorporate the three villages into a new City of Eau Claire was presented to Gov. Cadwallader C. Washburn after being passed by the state Legislature. (Yes, Wisconsin really had a governor named “Cadwallader C. Washburn.”) He signed it into law, and the bill was officially published on March 7. So why aren’t we celebrating on March 2 or March 7? Because, according to the bill’s legalistic wording, the incorporation didn’t officially take effect until the third Thursday of March – March 19, 1872.

To make a long story short, it’s because of that bit of bureaucratic minutiae that we mark Eau Claire’s birthday on that date.