What happens when you’ve never really been a neighbor, or the entire beloved street is packed full of new neighbors? What happens when a historic neighborhood slowly becomes the place where young college students learn to study, party, fall in love, and interact with the real world, both positively and negatively? What happens in a place where a vast population of students discovers what it feels like to be transient, and where some landlords take advantage of the students’ transient nature? 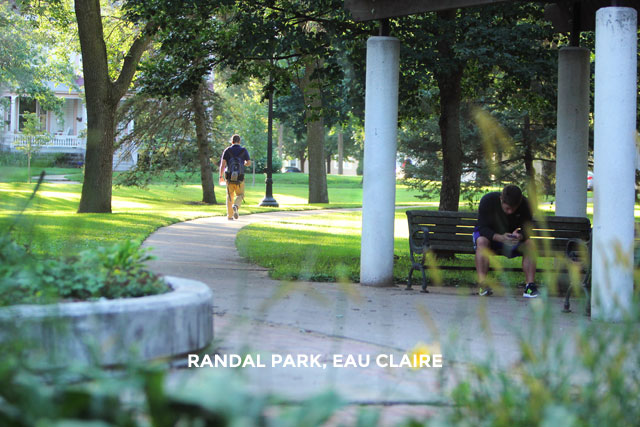 The Historic Randall Park Neighborhood has been a major housing choice for UW-Eau Claire students for decades, and their presence has been somewhat of a noticeable issue since at least 1978. The Randall Park Neighborhood — which has the largest concentration of historic sites in Eau Claire — has seen a consistent downward trend of owner-occupied houses and is consistently in a flux of new neighbors, mostly students. About 85 percent of homes in the neighborhood are rentals, according the 2010 U.S. Census, which is an increase from the 81 percent in 2000 and the 77 percent in 1990. Most who have lived in the neighborhood know with certainty the mischief a plethora of college students can get into during a normal weekend. This mischief, along with disinterest in property upkeep, has been a long-standing problem for long-term Randall Park residents.

On Sept. 9, the Eau Claire City Council passed a resolution that adopted an update to the Historic Randall Park Neighborhood Plan as part of the city’s Comprehensive Plan. The update to the 1995 neighborhood plan is considered a continued effort to strengthen the neighborhood against decline. One of the goals is to shore up the share of owner-occupied homes, yet it should be known that the update to the 1995 plan wasn’t in response to its failures, but a furthering of its successes. 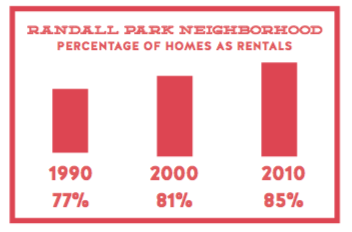 According to Pat Ivory, an associate planner with the city of Eau Claire, there has been “substantial work with the university and the police department to address some of the alcohol-related problems and property upkeep problems.” Ivory commented that the 1995 plan failed to curb the decline in the percentage of owner-occupied homes and said that “there have been improvements, but there are areas where we need to work harder.”

The Historic Randall Park Neighborhood Association hopes that the updated plan will increase the enforcement of city ordinances that are currently on the books and limit the opportunities for spot zoning, or exempting certain locations and buildings from current city ordinances. The ultimate goal of the plan is to both increase the positive aspects of a historic neighborhood and protect them.

One homeowner, Nick Smiar, said the Historic Randall Park Neighborhood is a neighborhood at risk. Even though only about 10 percent of landlords would be considered predatory, as Smiar explains it, that 10 percent can be very damaging to a neighborhood. But ultimately, it’s getting better, he said: “If you talked to people who lived in this neighborhood 10, 12, 15 years ago, and now, there is a definite difference.”

A large reason for the changes, even though the number of owner-occupied homes has decreased, is that the university, the city, and homeowners have been consistently seeking ways in which they can improve not only the state of the houses, but the interactions between neighbors. For example, Smiar and his wife, Helene, who is the current president of the neighborhood association, make sure that every fall they meet their student neighbors and provide living examples to students on how to be good neighbors.

Smiar stressed that the majority of students and rental owners have contributed to the successful changes that the Historic Randall Park Neighborhood is experiencing and that only a small percentage of rental owners or student tenants create problems.

The City Council and the university are both very interested in continuing to cultivate positive change in such an important neighborhood, Smiar said, which should continue to cultivate positive relationships and attract more and more of the city to enjoy the many wonderful restaurants, parks, and other attractions there.