How do you build a neighborhood? That’s a brick-and-mortar question, but it’s also a sociological one. It’s a question of city ordinances, of developers’ dreams, and of everyday individuals’ desire to get along with the folks next door.

In one sense, neighborhoods just are – they grow from the alchemy of the individuals, institutions, and physical elements in a given locale. But they also can be consciously created through planning, foresight, and organization – so let’s ponder how to build a neighborhood in two ways, literally and figuratively.

Developers like Jim Rooney are the people who literally build neighborhoods. The CEO and president of Heartland Contractors in Lake Hallie, Rooney has been involved in the construction and planning of literally hundreds of single-family homes and multifamily dwellings throughout the Chippewa Valley. Currently, Heartland Contractors is nearing completion of one major development (Prairie Park on Eau Claire’s far southeast side, off U.S. 53) and is in the opening stages of another (Hillcrest Greens on the site of the former Hillcrest golf course in Altoona).

Rooney stresses that these and other projects – including Whisper Ridge in Menomonie and Willow Creek in Chippewa Falls – aren’t just housing devel-opments: “We very specifically intend to build neighborhoods,” Rooney says. “Houses are sticks and stones, and you can build a house anywhere –in town or in the country. But it takes a little special feel to make it be a neighborhood.”

For Rooney, building a neighborhood means intentionally creating shared outdoor elements such as ponds, parks and smaller “tot lots” (featuring swing sets and basketball courts), multimodal trails, and even shared grills. Regardless if they live in a single-family home, a duplex, or an apartment, people “want to feel safe, they want the kids to feel safe, they want a lot of enjoyable outdoor space,” he says.

“Houses are sticks and stones, and you can build a house anywhere . But it takes a little special feel to make it be a neighborhood.”

However, most multi-family developments – especially apartment complexes – lack such outdoor amenities. Rooney says he’s tried to buck that stereotype, particularly in Prairie Park, which is entirely composed of multifamily dwellings (211 units in all). For example, instead of merely creating state-mandated storm water retention ponds, Heartland Con-tractors turned the three ponds at Prairie Park into legitimate features, which maintain their water level, include fountains, and are surrounded by green space.

Hillcrest is a more complex attempt at neighborhood-building. Rooney says his company is one year into a 10-year, master planned effort to transform the former golf course with 189 single-family homes, about 150 multifamily units, senior housing, and commercial space. A major element will be 65 acres of parkland donated to the City of Altoona along Otter Creek on the development’s southern edge. “Somebody buying in there knows that their yard backs up to a public park, and it will always be a public park, and that has value,” Rooney said.

While the commercial areas on the perimeter of Hillcrest Greens will develop later, they’re still an important part of the project’s overall blend of places to live, work, and play. Rooney knows that embarking on such projects is more challenging – and expensive – than simply buying land and building rows of cookie-cutter houses. “From just a pure financial standpoint, we could probably make more money kind of cannibalizing the land, which isn’t really the way we like to go,” he says. 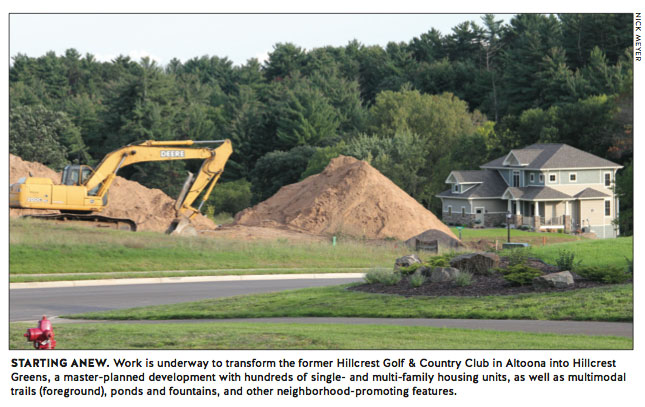 While some of us may live in new houses on new streets, most of us reside in places that began developing their character long before we arrived. These neighborhoods – whether officially defined or otherwise – are where we make our homes. And, just as surely as the shape of a new neighborhood depends on a developer, the shape and continued vitality of our existing neighborhoods depends on us.

While neighborhood associations have existed in larger cities for the better part of a century, they weren’t formed in Eau Claire until the 1970s, when five were created. More were incorporated in the latter half of the ’90s, and today there are 18 (although two are officially listed an inactive and several more are moribund). 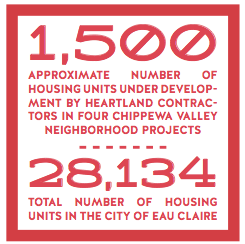 Pat Ivory, who has worked closely with neighborhood associations during his 30-year career with the city Department of Community Development, said these associations have typically been formed when an issue crops up that catalyzes residents. (For instance, he explains, the Historic Randall Park Neighborhood Association was formed in the ’70s to address the rising tide of student rentals in the neighborhood.) Sometimes interest in the association fades after the issue goes away, but sometimes the organization is strong enough to withstand the test of time.

“It’s a proactive group representing an area looking out for the best interests of that area,” Ivory says when asked to define a neighborhood association. “It provides a great way of providing communication within that area and to outside groups,” such as the city or the school district, he adds. Furthermore, neighborhood associations provide a great social outlet for people through picnics, thrift sales, and park projects. And Ned Noel, also an associate city planner, adds that having a neighborhood association “builds social cohesion in a neighborhood, whether it’s crime prevention or building trust.”

Longstanding groups like the Eastside Hill Neighborhood Association have done all of those things. Mark Wesenberg, who has lived in the neighborhood since 1978, was one of those who founded the group in 1997. (He’s also served as its president and now sits on the steering committee.) While at the time there were no acute problems that motivated Eastside Hill residents to band together, Wesenberg says he and others were generally concerned because older neighborhoods like theirs were beginning to deteriorate even as the city invested in expansion on its fringes.

The formation of the group proved fortuitous: No sooner had it been born than the city announced plans to remove the footbridge across the Eau Claire River between Boyd Park and Banbury Place. “The structure was there,” Wesenberg says of the association, “and we just kind of went with it. We actually had quite an impact, because we ended up not being able to save the bridge, but we got a new bridge.”

Soon after, the need to replace Boyd School arose as a neighborhood-dividing issue, and the association played a role again. The group filed a successful protest petition with the City Council to block the planned conversion of the former school into apartments (the neighborhood association preferred condominiums, and eventually the group’s attorney helped write the bylaws for the condominium association). And while the decision to build the new Flynn school on the site of an existing neighborhood playground was controversial, Wesenberg says the money the city received from the sale of the land ended up help the Eastside Hill in the form of improvements to Boyd Park.

Of course, the association has done far more than serve as a vehicle for residents’ activism in hot-button community issues. It’s sponsored a huge thrift sale, organized successful picnics, and helped create a prairie on a former parking lot next to Boyd Park. Wesenberg believes these and other efforts and amenities have helped draw new, young families to the Eastside Hill – families who may not recognize the past achievements of the neighborhood association. “To them, this is the way it’s looked always,” Wesenberg says of newer residents. “I think they like these things. Maybe that’s why the neighborhood attracted them.”

“Never doubt that a small group of thoughtful, committed citizens can change the world. Indeed, it is the only thing that ever has.” Margaret Mead, cultural anthropologist