DON'T WAIT making things happen
on your own

One obstacle stopping people from doing great things in their neighborhood is the perception that someone else is in charge – that you need to wait around for a group of neighbors or an association to tackle community events, programs, and initiatives. And that's just not true. It certainly helps to have an existing group of engaged citizens to help plan, promote, and execute your great ideas, but it really starts with you – sometimes one person is all it takes to make things happen. 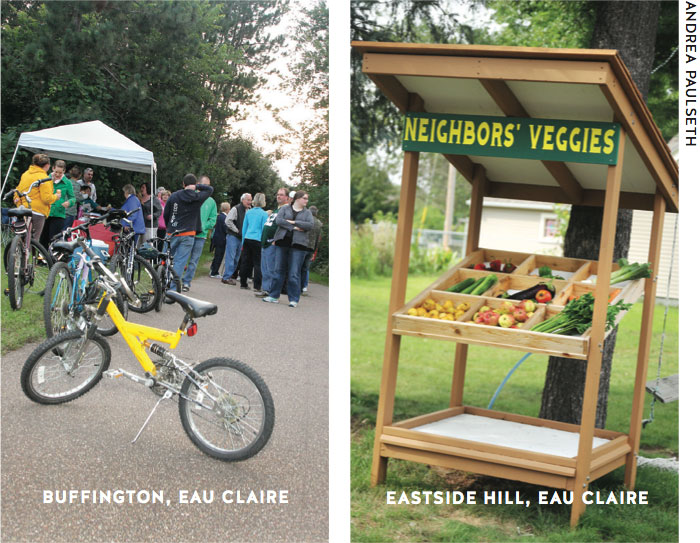 In Eau Claire, the Eastside Hill Neighborhood Garden Stand – built so neighbors can share homegrown vegetables – is promoted by the neighborhood's association, but the idea was developed outside of any official neighborhood business. Neighbor Shannon Paulus pushed the idea forward, the stand was built by neighbors Mark Wesenberg and Roger Pope with donated materials, a sign was painted by another neighbor, Sally Meyer, and the stand is stewarded by yet another neighbor, Erica Zerr who keeps it on her property.

And just this month, on a sunny September Sunday, neighbors Maggie Kufner and Jenni Berg organized an ice cream social in Eau Claire's Buffington Park for the surrounding neighborhood. The Buffington Neighborhood has an association, but a simple meet-n-greet with ice cream doesn't require any official planning, so the two simply spread the word and showed up to host the event. In the process, Kufner and Berg got neighbors together and drew attention to an often ignored park. Kufner also started a Facebook page for the neighborhood to help people communicate, share news, and plan more events.

“The revolution starts now, In your own backyard, In your own hometown.” Steve Earle, Nashville singer/songwriter