Are Neighborhoods in Decline?

Over generations, shifting social patterns have changed how we relate to those around us. So what does that mean for the fabric of our neighborhoods?

As you can probably guess, or have noticed with your own eyes, your neighborhood doesn’t look the same as it did in the 1950s – or even the 1970s or 1990s. People don’t spend as much time outside as they used to or stop and chitchat with one another when they’re out walking their dogs. Of course, everything in life is continually changing, but how have our neighborhoods changed, and has it been for the better? 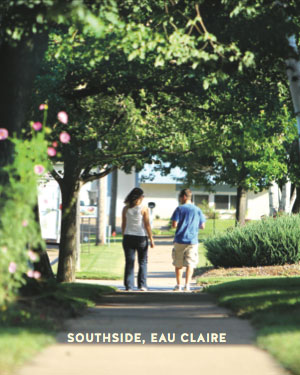 According to Dr. Jeremy Hein, a professor of sociology at UW-Eau Claire, “The neighborhood is an urban phenomena; it’s an effort by strangers to recreate community.” The community Dr. Hein is referring to is one made up of extended families, which is what communities used to be like prior to automobiles becoming commodities, making travel easier. Early in human history, before the advent of agricultural production, entire families would stick together and constantly move with the weather, Dr. Hein said. Once farming started occurring on a large scale, people could live in one place for extended periods of time and do things other than farming. So people started doing other jobs, cities were created, and eventually this led to communities and neighborhoods.

While some people are driven crazy by their families and cringe at the thought of having them live right next door, they at least know they can trust their families and lean on them for support. In the old days, this closeness between extended families resulted in tightknit communities, where kids would play unattended in the streets, neighbors would go out of their way to talk to each other, and borrowing a cup of sugar from the people next door really did happen.

One person who knows about close communities from back in the day is Diane Bell, the customer service manager at Mega Foods East. Bell grew up in Altoona and lived in the same house from the time she was born in 1938 until she got married 20 years later and moved out. “Things were so different,” Bell said about the neighborhood during her childhood, a time when everyone knew each other. “All the young kids would play together in the area, in the sand fields that were open around the few houses that stood here.” In 1989, Bell moved back into that same house to take care of her ailing mother, and she’s still there 25 years later. “You don’t see the gathering outside like you used to,” Bell said. “You don’t see anybody out playing now.”

Why would it be that people don’t interact in Bell’s Altoona neighborhood anymore? It’s not like it’s a dangerous environment. Dr. Hein said that neighborhoods aren’t based on family anymore, but on location and the commonalities that people share in that close proximity to one another. “People with different backgrounds start mixing and try to create a sense of a group,” he said. Oftentimes, neighborhoods are formed by what school children go to, the jobs people have, or the recreational activities they participate in. “People have this notion that neighborhoods have died out, but they are now about jobs, leisure activities, etc.,” said Dr. Hein. Neighborhoods do still exist, they just have changed, which isn’t necessarily a bad thing. People in one particular neighborhood don’t just stick to socializing with those they live around, but have expanded their social circle to include their coworkers, classmates, and even people they met online.

If you’ve ever had trouble with your neighbors, you know the importance of people in communities getting along. When people who live in the same neighborhood are able to find common ground, the more likely they’re going to have a closer, more supportive neighborhood, said Dr. Hein. “You feel safe when you know the people you live around,” he said. “You are friendly with them and are supportive of them.” If people don’t have (or can’t find) common ground, then their neighborhood won’t be as cohesive. The people won’t be so friendly, open, or willing to lend a hand as needed.

Think about the kind of neighborhood you live in. Do you know everyone fairly well? Do you say “hi” when you pass each other on the sidewalk? Does your community have block parties, thrift sales, and a neighborhood association? If you’d like to see that kind of stuff happen, perhaps you might want to think about reaching out to those who live around you. Wave to them next time you’re both out getting your mail. Heck, maybe even bring some cookies over just to be nice. Everyone loves cookies. And who knows, maybe you’ll meet someone as awesome as you.