Back to the FRONT

Reclaiming your front yard along with your sense of community

There was a time when the front porch was the place to be. Nearly every home on every block had a porch from which people were able to stay plugged in to their neighborhood or community as the parade of life passed by. By the time cookie-cutter subdivision developments came into style in the ’50s (think “Leave it to Beaver”), front porches gave way to “sun porches,” “breezeways,” “enclosures,” and eventually, just the plain old façade of a garage. What happened? People moved to their protective, hermetically sealed backyards. Now, front porches and stoops are back in fashion, but not as a status symbol so much as a hangout. In the Project for Public Spaces’ “Great Neighborhood Book,” they credit Minneapolis as one of the places making this progressive move. Author Jay Walljasper talked with a family that built a second-story patio that they liked, but made them feel cut off from the neighborhood. So they built a front deck and put out a fire pit, moves they would later say changed their lives. In short, people are realizing the placemaking potential of a simple thing like a yard. 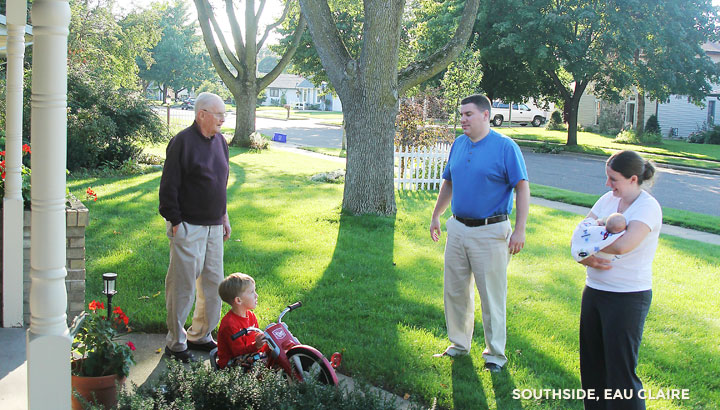 Around the same time porches were standards in universal design, so too were alleyways on neighborhood blocks. Often built to provide rear access to your home (where your garage was) and give service vehicles access (because your garbage was there, too), these alleys were either roughly paved or composed of gravel/ dirt. Many now think of them as run-down, crime-ridden areas, but that’s only because they were no longer common practice after the ‘50s (thus falling on the priorities list), when driveways and garages moved up and backyards became more private. But some, like famed architect and urban planner Andrés Duany (who wrote “Suburban Nation: The Rise of Sprawl and Decline of the American Dream”) have long insisted that alleys better integrate neighborhoods. They are another shared area where backyards meet and cars/pe-destrians travel, so one in which you’ll touch base with neighbors. A simple alley can act as a backyard connector, where spaces feel open and welcome neighbors for conversations, potlucks/barbeques, lawn games, or their kids to play together.

There used to be a time when backyards were the place where kids from adjoining houses would come together to play, and crossing between yards wasn’t an issue whatsoever. It’s something fairly rare nowadays (especially in large suburban communities), but some people are making conscious efforts to change that. A close-to-home example can be found in Wisconsin Dells, in the front yard of the man credited with starting the town’s first waterparks. Jack Waterman, who started and sold what is now Noah’s Ark and Great Wolf, lives in the best trick-or-treating neighborhood in the Dells. Several years ago Waterman decided to transform a giant chunk of his yard into a shared playground for the kids in the neighborhood. In summer, it’s a baseball diamond furnished with bases, balls, and bats. In fall, it’s football field. He maintains it, paints the lines, and even installed an automatic sprinkler system. The parents with homes in that neighborhoods are pumped to live there, and saying the kids are psyched is an understatement.

It’s simple, really: Create reasons to relax in your front yard. It’s not a matter of telling yourself you’re going to, so much as making yourself do so. Where we relax and recreate is often a reflexive habit, and luckily there’s an easy way to transplant this habit. Start with things you like to do in your backyard, and ask yourself if that’s something you’d enjoy just as much in front. If you’re hoping to get out front to interact with neighbors and connect with the community, what better way than creating shared activities with a neighbor you know and are comfortable with? As long as you find at least one thing that will regularly get you out front, you’re in good shape. If you can’t think of something, then you might have to go all out. Maybe consider building something new, which could be as easy as a hammock or as difficult as a gazebo, pergola, or pond. There’s tons of possibilities, so let your imagination run wild.