What Happened to Our NEIGHBOR-STORES


So I was out for jovial walk with the family one evening, and while we merrily strolled through the neighborhood, I was struck (as I often am) by an all-encompassing urge. I wanted a tasty coffee-based beverage. Unfortunately, we were upon foot, and the nearest coffee shops would have required either a) a short drive or b) a much, much longer walk involving the traversal of busy roads. This sucked. 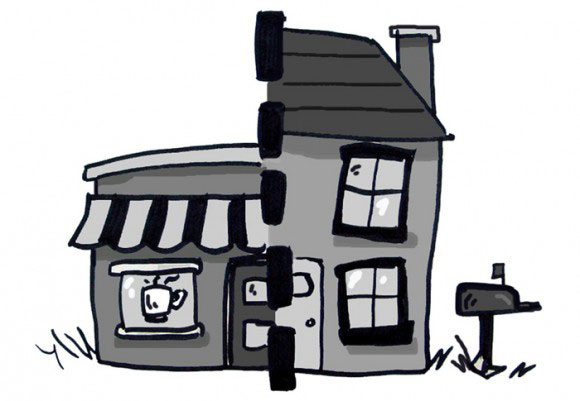 My wife commented on how much she wished there was a coffee shop or a market or a café or a hardware store located right within the neighborhood, right amongst a row of houses – a “neighbor-store,” if you will. The location would encourage us to walk more while conveniently cutting down on travel time, and if the business was located in a converted house, it’d be a cool place to just hang out.

In our neighborhood, there are a number of buildings which formerly were businesses. A few of them still do. Within a few blocks of our house there’s a building that used to be Timm’s Dairy – a once-beloved corner market that’s been out of business for years. There’s a great (and thriving) business in its place, but I’m kind of sad to not have a traditional market down on the corner.

Eau Claire’s older neighborhoods are peppered with these kinds of buildings, but fewer and fewer actually house a business. Little shops and markets just don’t exist in the middle (or even on the edges) of neighborhoods anymore. So what’s up with these neighbor-stores, and why don’t we see more of them?

The “why don’t we see more of them” question is easy to answer – we stopped supporting them. Nowadays, big box stores offer you groceries alongside clothing and motor oil and camping gear and reclining sofa sleepers, all in one place, so who gives a crap about the corner market?

The “what’s up with these neighbor-stores” question is slightly more complicated. How does one figure out what’s up? If you’re like me, you call Thomas Reiter, Project Coordinator for Eau Claire’s Department of Community Development. He says that, in most cases, these properties held businesses prior to current zoning laws set up in the mid 1950s (most of them since the early 1900s), and are considered “legal nonconforming uses” of the land. Almost all of Eau Claire’s neighborhoods are zoned for residential-only use (exceptions would be places like the downtown area where upper floor living space is allowed), so the only chance someone has of starting a neighborhood store is to acquire one of these special hunks of land.

Reiter says that, over the past two decades, Eau Claire’s neighbor-stores have almost all been torn down to make way for housing. He also says he gets a few calls a year from people looking to start a coffee shop or similar business in their home. Unfortunately, Reiter has to turn them down. He says the zoning laws are in place to preserve a neighborhood’s identity, and in most cases, I can see his point. I’d hate the see Hot Topic buy a quaint bungalow a block from my house to sell Nirvana T-shirts to the neighborhood’s 12-year-olds.

But what about shops and stores that can really serve a neighborhood, like a market or a coffee shop or a hardware store or a market/coffee shop/hardware store? As I’m thinking more about the gas it takes to go get a fancy-schmancy coffee drink, or a head of lettuce, or a six (and by “six” I mean “30”) pack of beer, it makes less and less sense to drive. But unless some neighborhood kids set up an iced mocha/romaine/beer stand down the street, most of us are gonna climb into the car and burn some fossil fuel. And the price of that beer goes up with every mile between us and the supermarket.

What about brand new, yet to be built neighborhoods, you ask? In 2012, to encourage more development options, Reiter says the city approved two different ordinances allowing developers to create opportunities for businesses within brand-new neighborhoods – one for traditional style neighborhoods, allowing for small businesses mixed with housing, and a second ordinance for mixed-use buildings in commercial areas (such as the reconstructed Hastings Way). But to date, not one developer has applied to do this. And so it appears that things like a neighborhood coffee shop aren’t likely to pop up anytime soon, even within a community designed from scratch.

I’m not sure what my point is here, because I can’t magically rezone the house down the street with my magic rezoning wand (it’s really just for show). Reiter says I’d need to get the whole damn neighborhood rezoned, and the only way to do that is to get a consensus from all property owners in the zone. That seems excruciatingly unlikely. So I guess for now we should focus on the existing neighbor-stores out there and the people who run those businesses. See if you can help them out – their stores are truly a special part of the community that are worth preserving.