SCREENINGS Under the Stars

how one man’s driveway becomes an outdoor theater

Want to make family movie night special? Well, you could make some microwave popcorn. Or, if you’re like Wade Cain, you could move the screening from the living room to the driveway, and invite your friends and neighbors. A few years ago, Cain – who lives near Mitscher Park on Eau Claire’s south side – decided he wanted to promote family bonding with the help of the big (or at least biggish) screen. Enchanted by childhood memories of watching Super 8 home movies projected on his grandmother’s bedroom door and going to blockbusters such as Superman in the theater, Cain wanted to give his kids a similar experience. These days, nearly any TV show or movie a kid can imagine is available streaming on Netflix or on DVD; during Cain’s boyhood, watching a favorite film was a treat (and often a costly one). 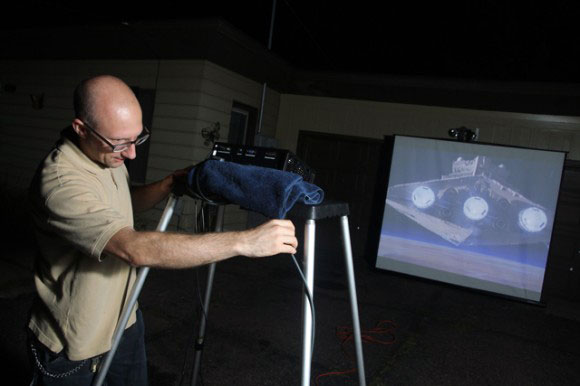 NOT LONG AGO, IN A DRIVEWAY NOT FAR AWAY ... Wade Cain of Eau Claire
demonstrates his outdoor film-projecting gear, which he uses to show
movies to his family, friends, and neighbors.

But setting up a projector in the driveway isn’t only about giving Cain’s kids – ages 11 and 9 – an old-school experience. “The other part of throwing an outdoor movie is it’s a way to trick people into hanging out with us,” Cain says. “Humans like to be hermits too often I think – asking them to come over for a movie can be a good excuse to spend time with friends.” Sometimes it’s only Cain and his family who settle into lawn chairs for the flick. At other times, two or three other families join the fun on a Monday evening (although this summer, Cain said, the films were supplanted by a multifamily baseball game in the park).

Cain’s outside-the-home theater system is relatively simple and inexpensive. Sometimes he uses an old screen he got from his father-in-law; at other times, he employs a couple of thrift-store bedsheets hung from a PVC pipe stuck in a five-gallon bucket of cement. Add a projector, an old DVD player, and a set of stereo speakers, and you’ve got yourself a neighborhood film fest.

Cain says the films generally are kid-friendly, such as Star Wars, Spider-Man, and Night at the Museum. “I think fiction gives parents a fun jumping-off point we can use to find out what our kids think about things,” he says. “It also gives me opportunities to give ‘Dad lectures’ that are hopefully less boring than the ones I give when Star Wars isn’t part of the lesson.”

So whether you want to create some neighborhood goodwill or use Obi-Wan Kenobi to help your kids learn about life, may the force be with you.