Afraid of Tackling Wisconsin’s Hilly Terrain? An E-Bike Can Give You a Boost

Is an e-bike ‘cheating’? Not if it saves your aging knees, a cycling enthusiast says

Tony Monpas of Eau Claire on his e-bike.

In the spring of 1972, my college roommate Craig Miller and I hitched to our parents’ homes in Wisconsin Rapids to pick up our bicycles stored there for the winter. Two days later we set out at dawn and covered the 98 miles back to UWEC in about 14 hours. Yeah, I’m not that person anymore.

However, I do still like to bike, and upon moving back to the city of my alma mater after a 50-year absence, I was delighted to see what a bicycle-friendly town Eau Claire had become. The only problem was that just about anywhere I wanted to go from my Putnam Heights driveway on my ancient Mercier 10 speed, especially to those lovely bike paths along the Chip, meant HILLS … steep, get-off-and-walk-your-bike-up hills. And I ain’t that person, either. But I found there was hope: an e-bike.

If you’re not familiar with e-bikes, the first thing to recognize is that most aren’t like scooters or motorcycles. The majority of e-bikes are “pedal-assist,” which means you still have to burn some calories to get around, but a battery and a cunning little motor can give you the boost you need to climb hills and extend your riding time.

Is an e-bike “cheating”? I don’t think so, at least no more than using a five-pound, carbon fiber 18 speed with pencil-thin tires is cheating. Riding an e-bike in a mid-range boost setting vs. a conventional bike has been compared to running vs. brisk walking. Yes, riding an e-bike is still work, but most importantly, e-bikes enable decrepitude-battling people like me to become or continue to be bicycle riders. A couple of boomers I know who bought e-bikes said they literally giggle their way up hills.

And I’m not alone. Market research indicates e-bike sales rose more than 90% in the last few years, and in the Netherlands, probably the most bike-happy country in the world, sales of e-bikes came close to surpassing those of conventional bikes in 2019. Wisconsin-based Trek claims e-bikes now make up more than a third of their sales. 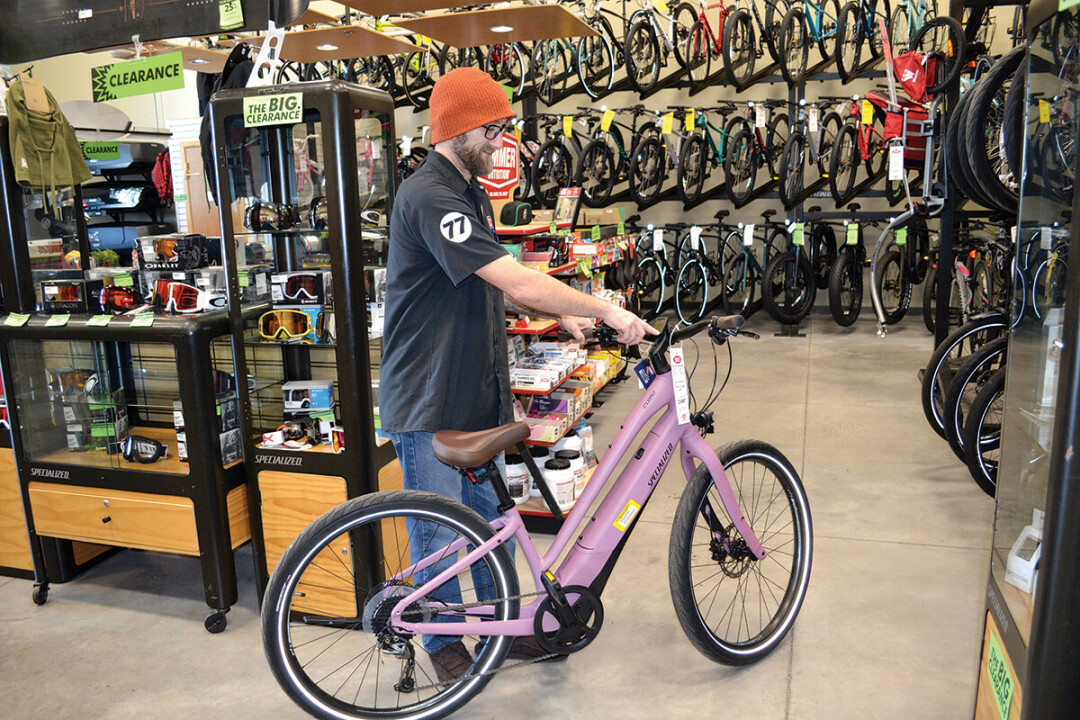 Who’s buying them? As you’d expect, e-bikes are popular with the 40-plus segment. In fact, last year the L.E. Phillips Senior Center in Eau Claire began loaning out e-bike recumbent trikes. But as Pat Rolbiecki, owner of Riverside Bike and Skate, points out, who’s buying e-bikes may be more a reflection of who has the most disposable income than of who’s just looking for a less taxing ride. “I’ve yet to find a person – even the purest of purists, the race crowd – if you get them on one, when they come back you will not find anybody who has something negative to say,” Rolbiecki said.

Jon Lavelle, manager of Erik’s Bike Shop in Eau Claire, said more and more road racers are using e-bikes for training because of their lower impact on knees and hips. He added some also buy e-bikes so they can keep up with a faster biking partner.

The increasing demand for e-bikes has of course spawned a bunch of brands, with prices for a decent bike starting around $1,500. Prices depend on the options you want and the style: mountain, street, cargo, folding, recumbent, trike, etc. I chose a $2,300 Class I e-bike from Trek, basically because it had gotten good marks and because I like the company’s philosophy and Wisconsin roots, but there are a host of brands available in the Chippewa Valley.

For someone deliberating the purchase of an e-bike, prime features to consider would be battery range and recharge time. Many different brands use the same battery and motor, and distance before charging depends on which of usually five levels of boost you select. (E-bikes typically can go 35 to 100 miles without recharging.) The most popular (and bike-path legal) e-bikes will stop assisting at 20 mph, but since e-bikes can be fast, good brakes are essential, and a bit wider tire width is usually recommended. Class 2 e-bikes can have a throttle, which allows a rider to maintain a speed without pedaling and can go up to 28 mph; however, they are not legal on most bike paths. So far, mountain style e-bikes are not allowed on Eau Claire County bike trails. Class 3 e-bikes also do not require peddling and can go faster than 30 mph; however, the jury is out on what makes them different than scooters, so licensing and regulations may be in their future. 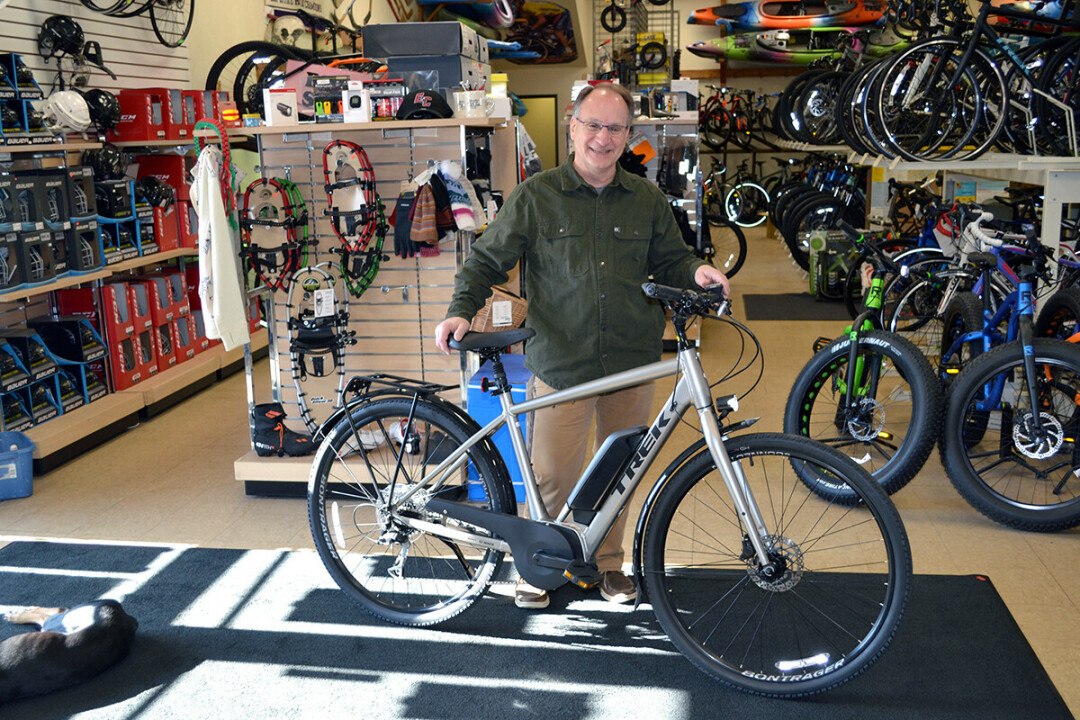 One drawback to e-bikes is weight. Because of the battery and motor, an e-bike can weigh 50 pounds or more, which not only means they’re heavy to lift, but also means a regular bike rack won’t do. I found a hitch mount rack I’m happy with for about $230. Many riders will also want to “spring” for a better seat, since most stock ones are typically poor, and of course a good helmet is essential. To make my bike a grocery hauler I added a rear rack, a trunk and some saddle bags. I’m now thinking about an extended trip, maybe camping; with pedal-assist you can carry a lot of stuff!

A couple of summers ago, after the taunting from another e-biker, I finally summoned the courage to try the UW-Eau Claire campus hill. Selecting “Turbo” for maximum assist and gearing down to one of my lowest gears, I was able to steadily climb to the summit without even standing on the pedals. Breathing hard but bursting with pride, I expected a round of applause or at least a nod of approval from the pajama-ed students heading to breakfast at Hilltop, but they seemed unimpressed. Next was State Street, then Harding Avenue. Who knows what could be next? Now that I have an e-bike, apart from the need for the occasional charge, there are no limits.