if you want to hear a good ghost story, just ask someone who looks for ghosts ... for fun 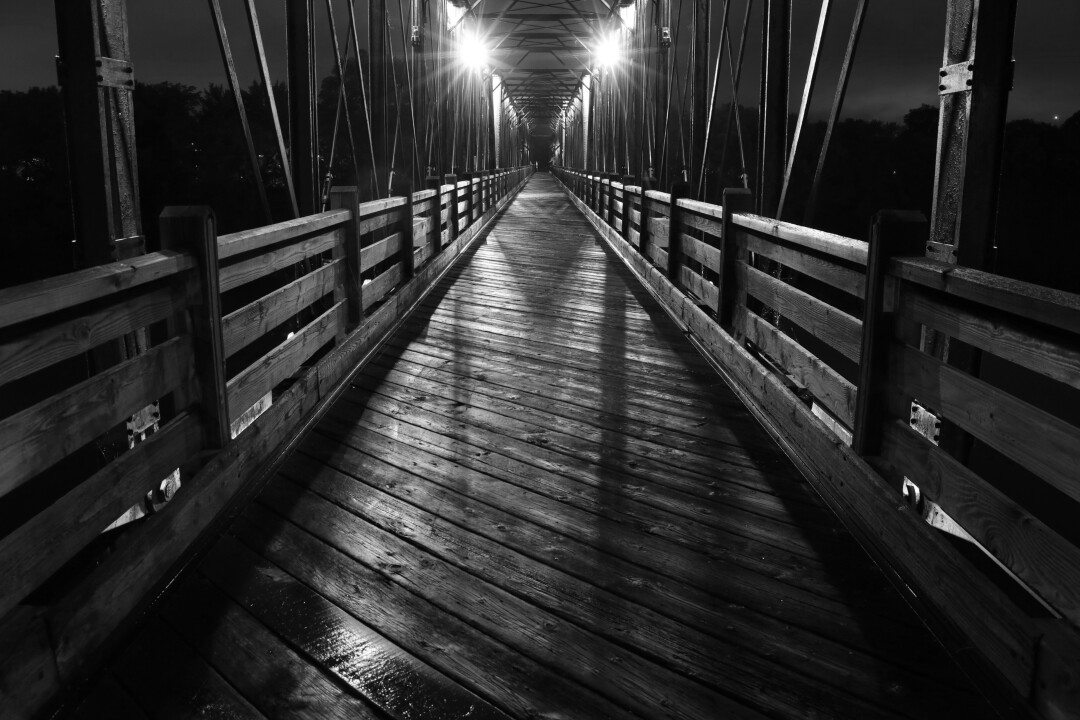 WHO GOES THERE? An eerie Eau Claire evening, photographed by Tina Ecker.

Terry Fisk is a paranormal investigator for Unexplained Research LLC, as well as noted authority on death and the afterlife. He is also the coauthor of The Wisconsin Road Guide to Haunted Locations and six other ghostly reads.

After returning home from an investigative road trip, Terry’s wife accused him of bringing work home. “Throughout the house, we began finding doors that were mysteriously open or closed at times when they shouldn’t be,” Fisk said. Sometimes, they would find kitchen cabinets open for no reason. Throughout the next three months, the problem only grew worse. One day, Terry and his wife were sitting on the couch peacefully watching TV, when they were startled by the sound of a doorknob from their french doors rattling. “We immediately jumped up and ran to investigate,” Fisk said, but nothing was there. On another day, Terry and his wife were talking in their living room. “While I was looking at her,” Terry said, “I noticed what appeared to be an orange, nebulous shape in my peripheral vision.” He quickly turned his head to look at it, but – at the same time – it vanished, and another door flung wide open. His wife saw it, too. It wasn’t until Terry went on another ghost investigation that the spirit left.

Tina Ecker is a renowned local photographer by day and a paranormal investigator by night. “The paranormal has been a part of my life since childhood,” Ecker said. The unexplainable became normal for her.

One night when Ecker was asleep, she was suddenly awoken by loud music coming from the living room in her grandmother’s house, and she walked toward it. “I stopped just short of that room as I watched my Grandmother’s empty rocking chair rocking back and forth as if someone were in it,” Ecker said. She then watched in horror as the rocking chair slowly stopped rocking, as though someone had left when she entered the room. That same night around 3am, Ecker was awoken again by the phone ringing. After speaking briefly on the phone, she crawled back in bed, laying on her side. “As I laid there, I heard a loud sigh come from the foot of the bed,” Ecker said. Her eyes jolted open, and she glanced at the alarm clock, which read 3:19am. She knew she was definitely awake. She felt pressure lift from the foot of her bed, and heard footsteps walking alongside her. “I felt a hand on my shoulder and then pressure as I believed it was kneeling down beside me,” Ecker said. “The side of my bed was even pushed down.”