Do Hellhounds Abound in the Chippewa Valley? 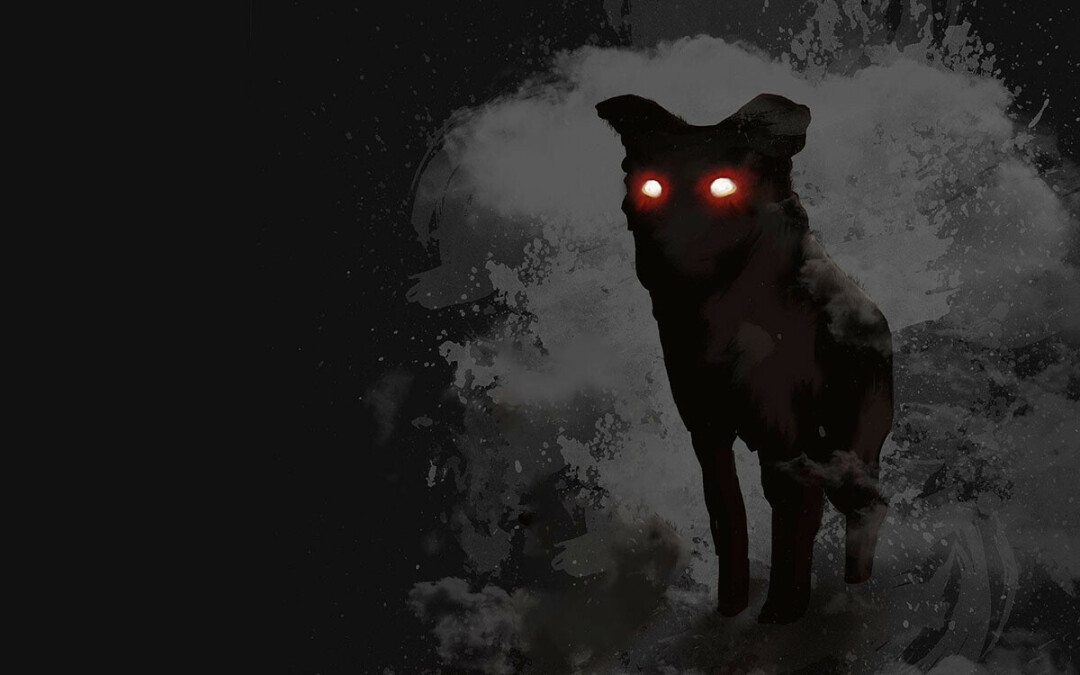 Every year as the chilling fall weather starts to permeate our bones, people often ask me to point them to a scary place they can visit in order to fully get into the Halloween spirit. Of course, I am always happy to inject some terror into this sinister season. Yet this year is a bit different. Thanks to COVID-19, 2020 is already a frightening time without the addition of hauntings and monsters. With this in mind, I have chosen a legend that can be experienced entirely outdoors, completely free from other people (at least living ones). This year I am giving you the chance to go hunting for hellhounds – although it is much more likely that the hellhounds will be hunting you. What? You have never heard of hellhounds? Consider yourself lucky, as legend tells of hellhounds being gigantic black dogs with glowing red eyes. Many cultures believe that they are harbingers of death – if you are unfortunate enough to encounter one, a visit from the Grim Reaper will not be far behind. To make matters worse, hellhounds are also believed to guard portals to Hell and are here only to do the Devil’s bidding. Those of you who are still brave (or foolish) enough to go looking for these monsters are in luck; the Chippewa Valley is full of hellhound legends.

THE CURSED ISLAND OF MERIDEAN

First stop: the forgotten ghost town of Meridean on the Chippewa River west of Eau Claire. Not only is the area thought to be haunted by the siren-like ghost of Mary Dean, it also seems like a favorite prowling grounds of hellhounds. According to legend, nearly 60 years ago a parked truck was found down at the boat landing of Meridean. It was believed that two young kids who had gone down to the area and parked their vehicle were brutally torn apart by some fierce wild beast. When police looked inside the vehicle, they discovered blood splattered all over the interior, but the bodies of the victims were missing. Further analysis uncovered clumps of hair from some unidentified animal, and the bodies of the youngsters were never found. Although this makes for a troublingly good story, I have yet to find any evidence it actually happened. A gentleman at one of my lectures shared the following story with me. The man was a big burly biker, the exact type of guy who wouldn’t be scared by anything. He told me that he and a couple of his friends decided to take their bikes out to see the ghost of Mary Dean. On their arrival, the bikers were able to see that the dogs appeared to be nearly transparent – the group could almost see right through them. The second thing that freaked them out was the fact that the group exited the area at a quick pace, but the hellhounds had no problem keeping up with them, no matter how fast they went. With a gruesome-looking hellhound running right next to him, the man kicked out his foot and attempted to hit the ferocious dog. Much to his surprise, his foot simply went right through the creature. This aggressive action seemed to work, because after the kick, the dogs simply disappeared into the night. Fearing that the dogs were out to harm them, the bikers quickly decided to scurry out of the area as fast as they could.

If you happen to survive Meridean, don’t give up yet, there are plenty of hellhounds to go. In 2001, I was contacted by a woman who was a bit shaken up by an odd late-night experience. On what seemed like just another drive home, the woman was making her way south down Highway 37 when something odd caught her eye. Instinctively, she slowed down to grab a glimpse of what she initially thought was an extremely large dog. As her vehicle slowed, the real shape of the creature emerged. Crouching off to the side of the road was a large, heavily-muscled creature whose size was similar to a large bear, yet its shape was more like that of a dog, wolf, or panther. The creature was on all fours and cast an intimidating presence with its shimmering black skin. The woman didn’t dwell too long on the creature’s shape because something else had shifted her attention. What the woman saw next would give her nightmares. It was approximately 11:30pm, which meant that the country sky was extremely dark. This fact made it even easier for the woman to notice that the mysterious creature lurking on the side of the road had glowing red eyes that brightly pierced through the dark of night. The woman was now highly frightened, yet at the same time she felt almost mesmerized by the creature’s blazing gaze. The glowing red that showcased the eyes also seemed to be emanating from the beast’s mouth as well. The frightened woman hit the gas and torn off toward home.

Nearly one year after collecting the store above, I heard another eerily similar experience with what I was now calling the Eau Claire Beast. The second witness was an employee of an Eau Claire TV station who worked a late shift and left work around 11pm each night. The woman was heading home south out of town on U.S. Highway 53 when her headlights flashed against the outline of some creature positioned on the side of the road. Slowing down to avoid any possibly collision, the woman was amazed to see a very large panther-like creature off in the gully. The woman thought that it had to be a bear, yet it was so muscular, the body type didn’t quite fit. Perhaps the woman’s headlights startled the beast, because it quickly darted for the safety of the brush. Initially the woman thought little of her encounter; it wasn’t until she arrived home that the bizarreness of it set in, and she decided to report her experience.

HAVE HELLHOUNDS STALKED THE VALLEY FOR A LONG TIME?

After the recent sightings of the strange creature, I started to dig though old newspaper accounts and discovered that perhaps this creature was not new to our area. In fact, reports of the unknown creature dated back over 100 years. In March 1908, the La Crosse Tribune ran an article titled “Beast Causes Terror.” The article reported that a “wild beast” had been terrorizing residents in Eau Claire County. Adding additional fear to an already watchful community were the complaints from local farmers who claimed that some night-stalking creature had devoured their sheep and calves. On several occasions farmers would awake to find that some of their livestock had been torn to shreds by a vicious predator. While bloody animal carcasses were one thing, matters got even more disturbing when the story broke that the creature had quietly stalked behind a farmer’s young son as he was making his way home. Luckily no human victims were reported during the scare, and slowly over the years the terror of the beast somewhat subsided … that is until recent sightings revived the legend. Congratulations, you have survived the hellhound road trip! Now you can sit back and enjoy the Halloween season knowing that you did not fall victim to these devil dogs – unless, of course, that isn’t just a neighbor dog barking outside your window. Happy Halloween!