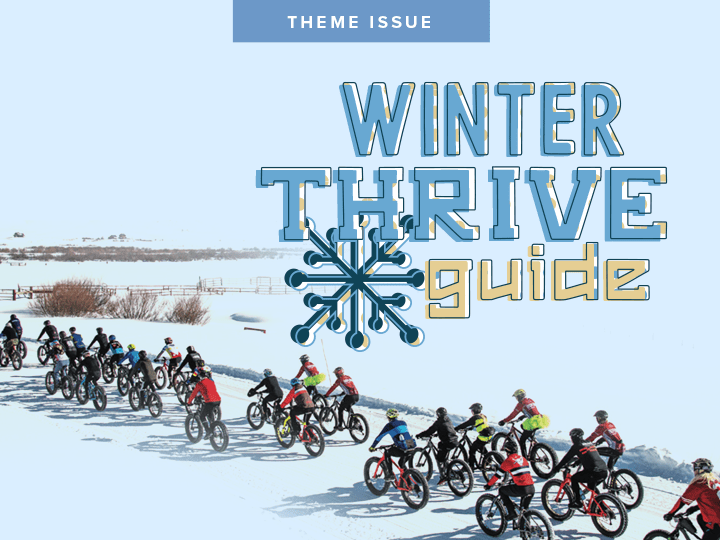 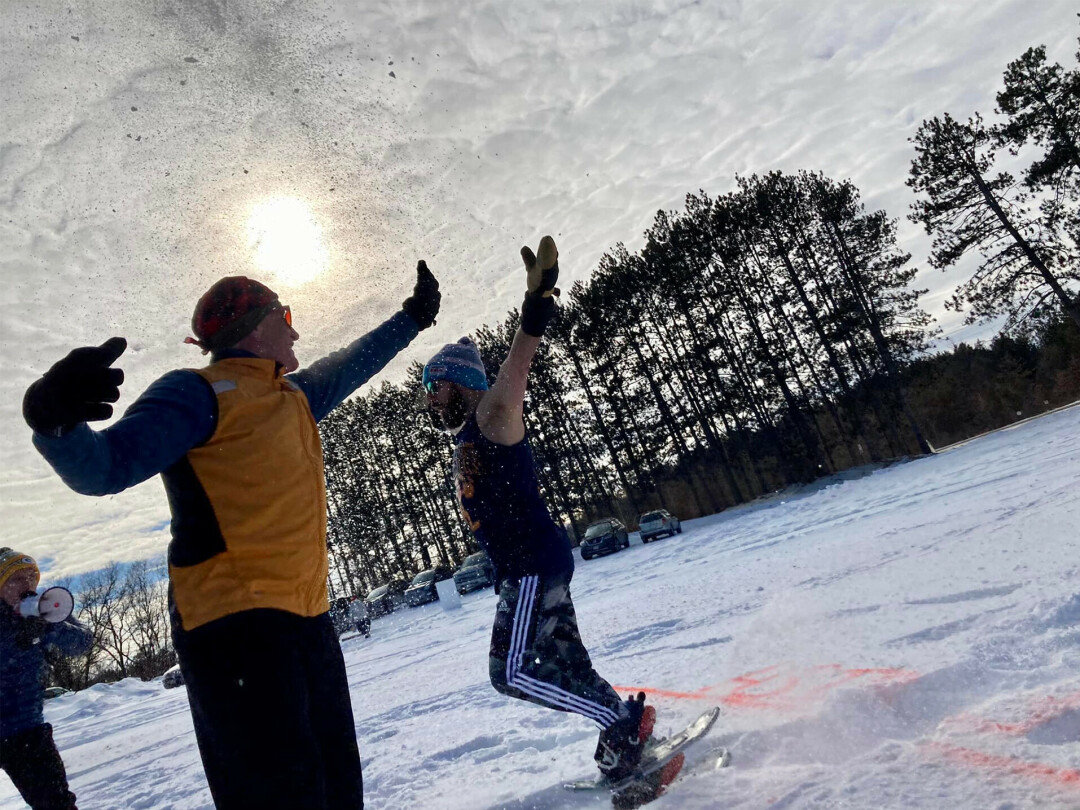 CHUG AND RUN. The area's Hash House Harriers group mixes running and beer, and while they might make some folks tilt their heads, the group takes a laidback approach to their runs and focuses on the best part: socializing and community. (Photos via Facebook)

It can be difficult for some folks to get their bodies up and moving about during our frigid Wisconsin winters, especially when there’s a warm couch and cold beer inside to enjoy. The Hash House Harriers have found the answer to that too-easy slump, right here in the Chippewa Valley. They’ve hit the trifecta, meshing beer, exercise, and camaraderie into one.

The local Hash House Harriers group not only gets together monthly to go on a beer-crawl style run but they also host the area’s summer Beer Mile and Annual Snowshoe Beer Mile events over at Fox Run Tavern, their biggest and most well-known events. But the group’s beginnings are humble ones, and after hitting a slump during the initial years of COVID-19 that they haven’t quite recovered from, the Hash House Harriers are hoping to get back to it in the new year.

Started by Tim McManus around 2015, the group grew from word-of-mouth and its Facebook page before McManus moved to Green Bay a couple of years after its founding. Aaron Walczak, a local teacher who joined the Hash House Harriers at its beginning, and Joe Bluma, who joined in 2017 after graduating from UW-Eau Claire, have taken the reins since, leading the group’s Friday runs and events like the Beer Mile.

Folks may be wondering: Why the heck are they mixing beer and running?

Well, Joe makes the duo sound pretty darn logical. “You get thirsty, you’re burning calories and you need to replenish them, so beer’s a good way to do that,” he explained. “If every mile is about 100-150 (calories burned) and every beer is about 100 calories plus electrolytes and carbs, it’s pretty good.”

Really, though, it’s the camaraderie of the group that makes it so fun, Joe and Aaron said. “I think it’s the silliness of the socializing,” Joe explained. “It’s the perfect mix of the three: socializing, you get some beer and you get exercise.”

Aaron explained it’s really not such a ridiculous idea once you break down their usual routes. They aren’t pounding five beers back-to-back and then sprinting a mile, but rather meeting up at a local bar as a group, maybe having one beer to start, and then running to the next bar and ending after about 1.5 miles or so.

“It’s more of an outlet for fun,” Aaron said. “It reminds people there are fun things to do, and it doesn’t have to be over the top.” 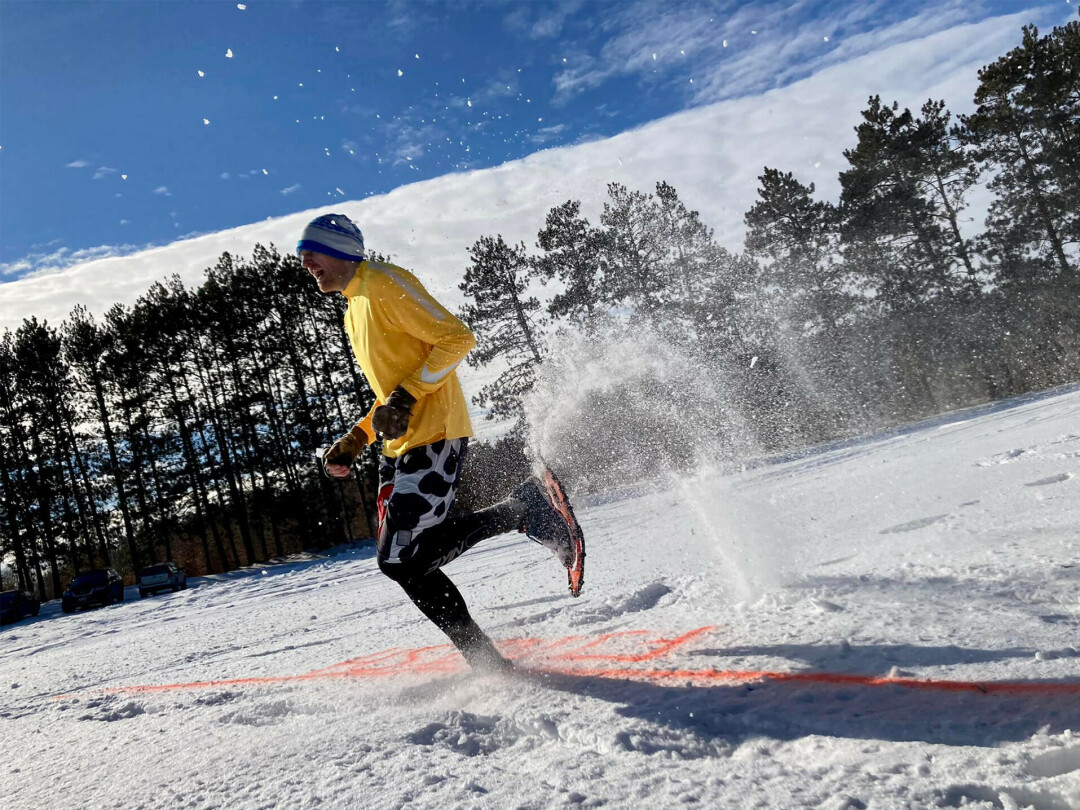 Joe Bluma at the 2020 Beer Mile at Fox Run Tavern.

While Aaron’s go-to brew of choice is a good ol’ Blue Moon, Joe can count on a Miller High Life, though during the winter he leans toward dark beer and stouts. However, at their winter Beer Mile event in recent years, everyone who participates has to drink the brews provided by Fox Run.

The duo is currently gearing up for this snowy season’s Beer Mile, slated for Saturday, Feb. 18. Likely to be held at Fox Run as it has been the past few seasons, the local Beer Mile is free for anyone to sign up for and participate in, with the cost of the beers being the only outright fee. There are a handful of rules to follow, but the chance for a beer-filled shot at glory is one reason participants are eager to take a whack at it.

“We set up tables outside the edge of the course – usually set up by Aaron and myself over at Fox Run – and each person buys their four beers from Fox Run. When the gun goes off to start running, you crack a beer and drink, run a quarter mile, crack another beer, run another quarter mile,” Joe explained. “(By the end) it’s one mile and four beers.” 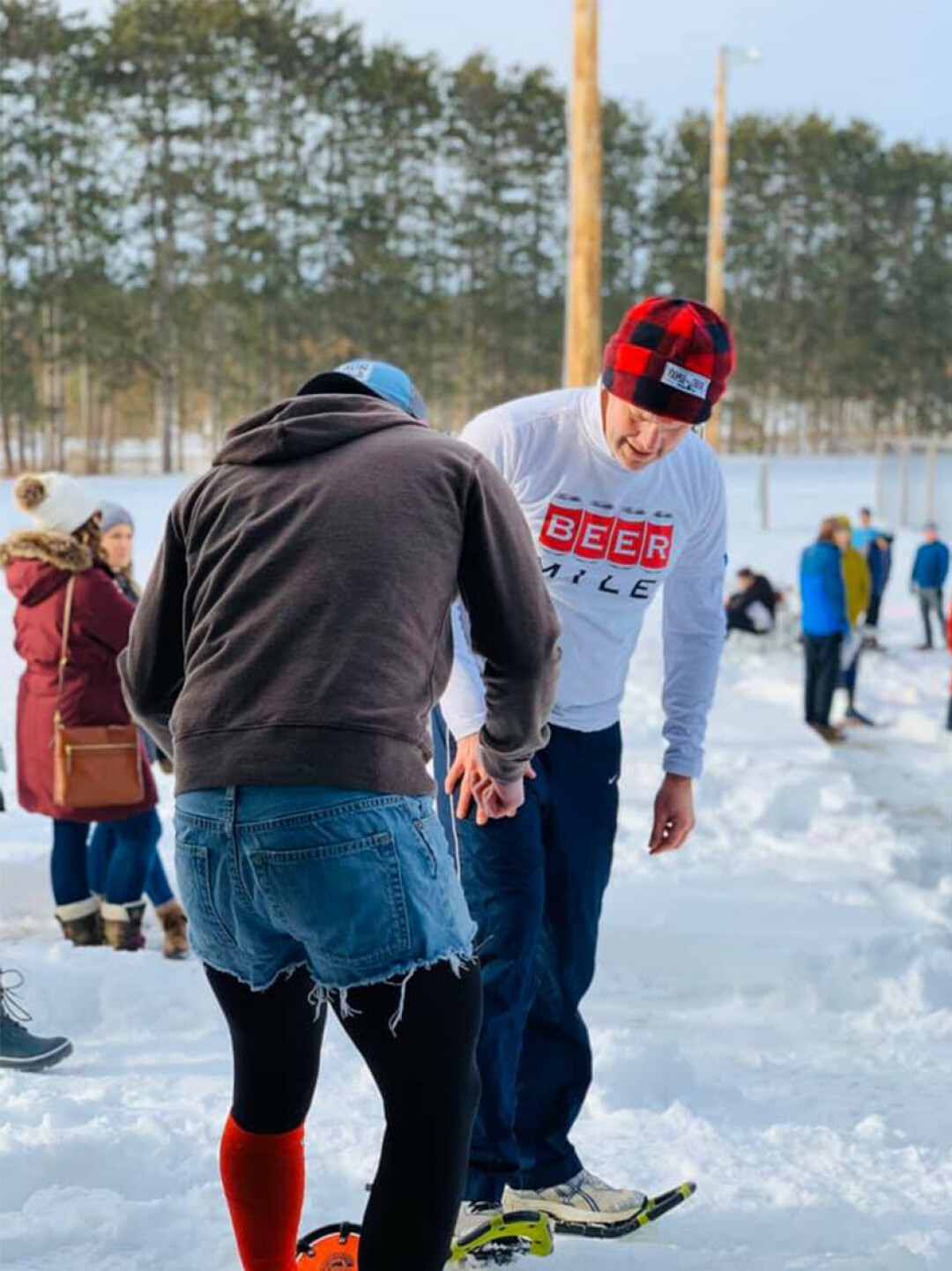 With running snowshoes strapped on, with a fair share of participants rocking goofy outfits for the winter run, the winter Beer Mile is the quintessential Chippewa Valley event: beer, good company, and some outdoor recreation.

Though the Hash House Harriers’ numbers have dwindled after COVID – a lot of the previously consistent members either started families since then or filled their schedules with other activities – they’ve had upwards of 70 participants in events. The duo is eager to keep the good times runnin’.

Right now, the Hash House Harriers’ regular runs are about one Friday a month with each route switching up a bit depending on where folks want to run; Joe usually posts the meet-up time and route on their Facebook group once decided. About 10 people consistently show up for the runs, typical bar stops are Lazy Monk’s, Dooley’s Pub, Wagners Lanes, and others.

They do more than the summer and winter Beer Mile events, Aaron said, bringing up the group’s Tower Relay event that’s based on an old college drinking game, and the half run – half a beer, not half a mile, he explained – and the Hash House Harriers have sparked other groups to form, too, including folks who are into skiing and other winter recreation.

In the future, the group may look into becoming an LLC since Aaron has been tossing around the idea for some time, he said. Doing that would likely allow the group to earn some money from events that could be used towards merch like T-shirts and purchasing an official run clock. For now, the Eau Claire Hash House Harriers are just looking forward to their next beer and run – together.

To keep up with the Eau Claire Hash House Harriers and hear about the next Friday run and Beer Mile event, follow them on Facebook. See their Facebook event for the 7th Annual National Snowshoe Beer Mile and sign up here!