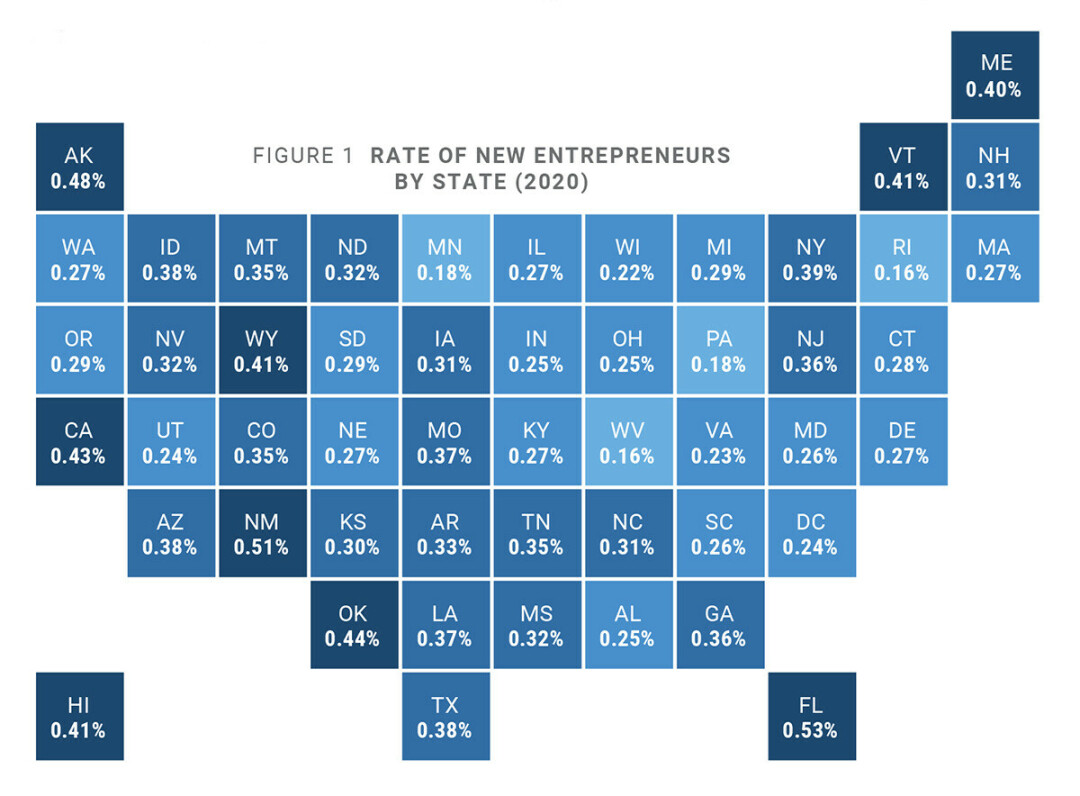 Wisconsin ranked near the bottom in the Kauffman Foundation's 2020 rankings for entrepreneurship by state, landing at No. 47 among all 50 states and the District of Columbia.

Is Wisconsin a good state to start a business? That’s potentially a multimillion-dollar question for entrepreneurs looking to put down roots. While the Badger State has traditionally landed near the bottom of rankings for entrepreneurship – as recently as five years ago, Wisconsin was dead last among the 50 states in startup activity – things are looking up a little more. Depending on what indexes you look at or how you measure entrepreneurial activity, Wisconsin is at least a middle-of-the-road place to hang up your proverbial shingle. Here are some relevant rankings from the Kauffman Foundation put into context.

First the bad (or at least less sunny) news: Wisconsin ranked 47th among the 50 states and D.C. in its Rate of New Entrepreneurs, according to the latest report by the Kauffman Foundation, a Kansas City-based nonprofit that focuses on advancing entrepreneurship. Simply put, this is a measure of the percentage of a state’s population that starts a new business in a given month. As of 2020, Wisconsin’s rate was 0.22%. For comparison, Florida topped the list at 0.53%, while the U.S. average was 0.38%. (If it’s any consolation, Wisconsin squeaked past Minnesota and its 0.18% rate.)

One of the statistics tracked by the Kauffman Foundation comes with a hefty name: the Rate of New Employer Business Actualization, defined as the “percent of all new businesses that make a first payroll within eight quarters of business application.” Essentially, it’s a measure of how quickly a business goes from existing only on paper to actually paying employees. The national rate in 2020 was 9.41% — in other words, for every 100 new businesses that start in the U.S., within two years about nine of them were expected to pay their first payroll. Wisconsin’s rate was calculated at 9.75% – just above the national average. Among all 50 states and the District of Columbia, Wisconsin landed at No. 26 – exactly in the middle. Compared with its neighbors, Wisconsin topped Michigan (7.13%) and Illinois (9.1%) and fell behind Iowa (11.4%) and Minnesota (11.35%).

The Badger State fares even better compared with its peers when it comes to business survival. According to the Kauffman Foundation, Wisconsin ranked 19th out of 51 for Startup Survival Rate in 2020. This metric “measures the percentage of new employer establishments that are still active after one year of operation.” Wisconsin’s Startup Survival Rate is 78.9%, besting neighbors Illinois (78.8%) and Michigan (71.8%) and trailing Minnesota (80.1%) and Iowa (79.8%).

The Kauffman Foundation combines these and other statistics into one mega ranking, the Kauffman Early-Stage Entrepreneurship Index. And, unfortunately, Wisconsin didn’t perform too well by this metric. As the Kauffman report indicates, the index is meant to present “a snapshot of early-stage entrepreneurial activity,” and I this case it isn’t a very flattering snapshot: Wisconsin is 42nd among the state and D.C. Fortunately, the report’s authors add the caveat that one very high or low indicator can throw the index off. “As such,” they conclude, “for more specific insights, we recommend that users focus primarily on each individual indicator and less on the overall composite score.” In that case, how about that Startup Survival Rate, huh?

To learn more about the Kauffman Foundation and its Indicators of Entrepreneurship, visit indicators.kauffman.org.