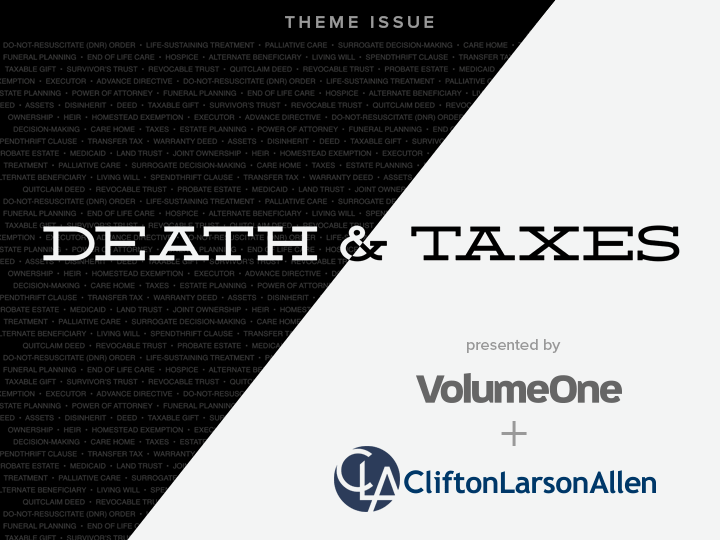 planning for your funeral can be hard to begin, but it’s ultimately rewarding Some occasions are enjoyable to plan: weddings, vacations, parties. Others simply aren’t. Funerals top the latter list. Besides the obvious reason – thinking about your funeral means thinking about your mortality – there’s the simply fact that it isn’t much fun to plan for an event that you won’t be able to attend.

Nonetheless, you can only avoid funeral planning for so long. Sooner or later, your own life will end, and if you haven’t made plans, your survivors will have to. Your family will be making decisions – perhaps difficult ones – when they are in a highly emotional state. When someone preplans his or her funeral, “The family that’s surviving is so grateful for that gift,” says Kelly Beede, who owns Evergreen Funeral Home & Crematory in Eau Claire with her husband, Jeff. Having your final wishes clearly spelled out can allow your survivors to move forward more quickly and deal with their grief.

“The first step is always having the conversation with your family,” Beede advises. It’s a difficult conversation to begin, she acknowledges, but a necessary one: She’s heard plenty of people planning their loved ones’ funerals say something like, “Well, Dad never talked about it.”

Dad isn’t alone: While 90 percent of Americans surveyed said it was very or somewhat important to communicate their funeral wishes to family members, only about 1 in 5 Americans have prearranged their funerals, according to a recent survey by the National Funeral Directors Association.

So while there may never be a good time to talk about end-of-life planning, that also means there isn’t really a bad time, either. Making plans or arrangements can be as simple as telling another person your wishes or as complex as laying out, in writing, exactly what you want to happen and setting aside money to pay for it.

“Do we serve a lot of families who preplanned? Yes we do. Is that the norm? No,” Beede says. Unsurprisingly, people who preplan their funerals tend to be elderly or those who have recently experienced the death of a loved one.

So how do you start planning ahead? Most funeral homes can give you a booklet or checklist to get you started. The information typically includes:

• Personal information. Details about your family – including children and grandchildren – as well as fond memories personal details that can be used to write an obituary.

• Locations of important papers. Where do you keep your will, bank account information, safe deposit boxes, and the like?

• What you want to be done with your remains.

While people may think that cremation is “simpler” than traditional burial, Beede explains that it actually involves numerous options and decisions. For example, there can be a viewing of the body before it is cremated. Cremated remains can be buried at a cemetery, kept at home, or scattered.

Cremation is an increasingly popular option. In 2016, for the first time ever, more than half of Americans – 50.2 percent – chose to be cremated, according to the National Funeral Directors Association. That’s a sharp increase in just a few years: As recently as 2010, only about 40 percent of Americans who died were cremated. In Wisconsin 55 percent of those who died in 2015 were cremated, a figure that’s expected to rise to 61 percent this year.

Just as important as answering questions is letting your loved ones know about your answers. Beede emphasizes that if all you do is fill out a booklet and file it away somewhere, you can’t truly tell your family that everything has been handled. While preplanning a funeral is not a binding contract, Beede says if you’ve outlined your desires clearly and discussed them with your family, it’s likely that they will respect your wishes.

In addition to preplanning their funerals, people can prefund them. As the cost of funerals increases, this option is increasingly attractive. According to the National Funeral Directors Association, last year the national median cost for a funeral with viewing and burial was $7,360. With a vault, the figure rose to $8,755. By comparison, the median cost of a funeral with viewing and cremation was $6,260.

Prefunding can be done in one of two ways, Beede says. First, you can set aside money in a specialized certificate of deposit, which is held in trust until your death. Secondly, you can purchase a specialized life insurance policy that will pay for your final expenses. There are advantages and disadvantages to each approach, so it’s wise to talk to professional about how to proceed.

Creating a plan for the end of your own life can also include personal touches. Beede fondly recalls one man – an avid musky fisherman – whose visitation was decorated with mounted muskies and even a pond. Mourners were given musky lures to take home. Other events at the funeral home have featured Harley-Davidson  motorcycles, garden plants, and mourners signing a casket with Sharpies.

However you choose to be memorialized, the recognition of your life will surely help those you leave behind.

“We’re still all human, and we all have processes we have to go through,” Beede says.