Fall for Some Good Scents 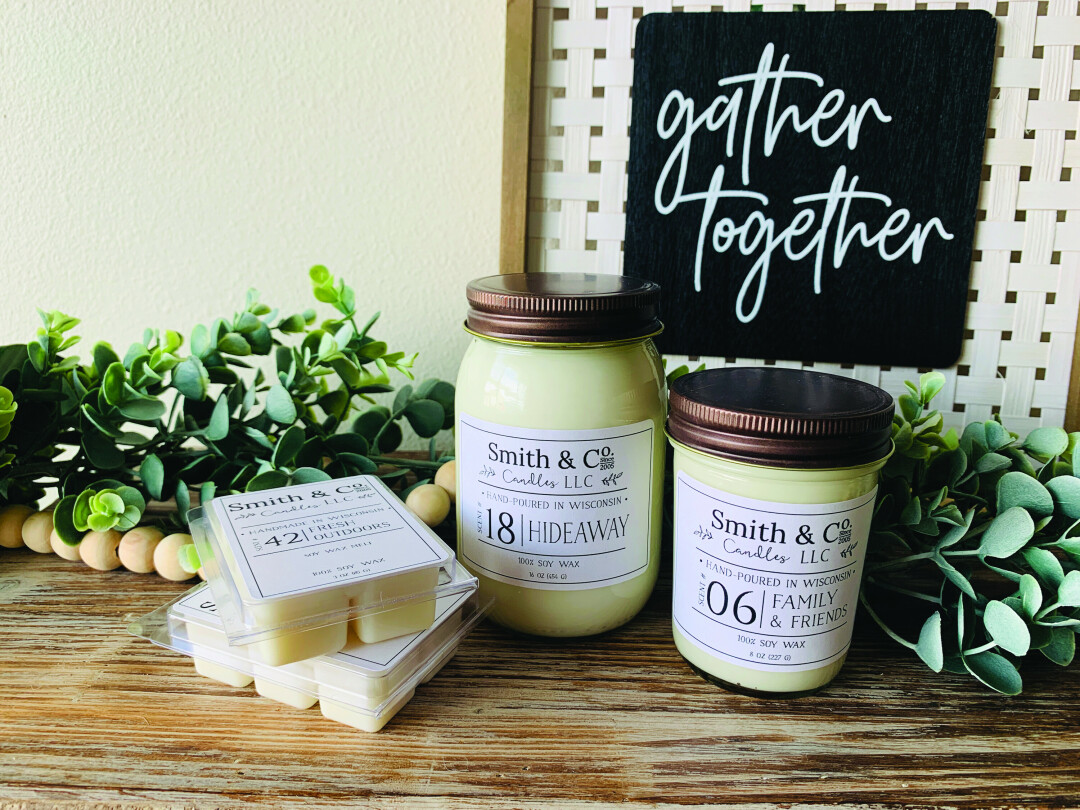 If there’s one thing that Kenna Smith-Hoff and Doug Hoff have found  is pretty nice about owning a candle-making business, it’s that their house always smells nice – particularly with the autumnal and holiday candle scents beginning to make their way to local shop shelves.

“No matter where we go, someone is like, ‘You smell good,’ ” Smith-Hoff said.

Smith and Co. Candles – founded by Smith-Hoff’s mother in 2005 – opened with a small-town, old-school vibe. After falling ill, Michele Smith passed the business onto Smith-Hoff, who quit her full-time job at a pediatric dental office to pursue candle making. Hoff, who later joined the candle-making business, juggles attending UW-Stout for a degree in psychology with developing new scents for the business.

“It’s been really fun,” Smith-Hoff said. “We’ve been able to be really super creative with everything.”

Since taking over the business in January, the couple have launched a snazzy new website, a social media presence, and subscription box options – not to mention a whole slew of new scents. Recently, they launched a Glazer donut-scented candle in partnership with Kwik Trip – since most of the Smith family has worked at the beloved Midwestern convenience store. But that’s not the only extraordinary scent they’ve concocted.

No matter where we go, someone is like, ‘You smell good.’”
-Kenna Smith-Hoff, Smith and Co. Candles

Both Smith-Hoff and Hoff love the top-selling scent “Pumpkin Pecan Waffles,” which has a nutmeg-gingery-vanilla aroma that is “really homey,” Hoff said. They also recommend “Colonial Cupboard” and “Family and Friends.” Their busiest season is autumn and Christmas time, and they plan out their fall scents in July. Some of their seasonal scents include “Caramel Apple Butter,” “Hillbilly Homebrew,” “Pumpkin Soufflé,” “Caramel Cinnamon Latte,” “Fireside,” and “Warm Apple Pie” – among many others. They’ve already begun looking at the holiday season – and it’s only September.

“We kind of get like scientists when we do it,” Smith-Hoff said. “It’s a lot of trial and error.”

Besides offering their candles in stores around Wisconsin (including The Local Store!), the pair launch unique scents in their 30- or 60-day subscription boxes, which contain a 16 oz. candle, a limited-edition 8 oz. scent, along with a room spray and a 3 oz. melt. The retail value is over $40 with shipping, but they offer it at $29.99 – which over 100 customers have taken advantage of. They also work hard to engage with customers through social media, getting an idea of what kinds of scents people would be interested in and doing a monthly live sale on Facebook. “Our customers go kind of batty for it,” Smith-Hoff said.

They still hand-make each of their candles in small batches, with ingredients that are completely U.S.-sourced and using 100% natural soy wax to create candles that are phalate-free and safe for your home. But it’s not just making the candles that gives these two business folks a sense of purpose.

“For me, it’s the creativity,” Hoff said. “Things that you wouldn’t think would go together and they do.”

You can check out all their cool candle scents at Smith and Co. Candle’s website at smithcocandlesllc.com.