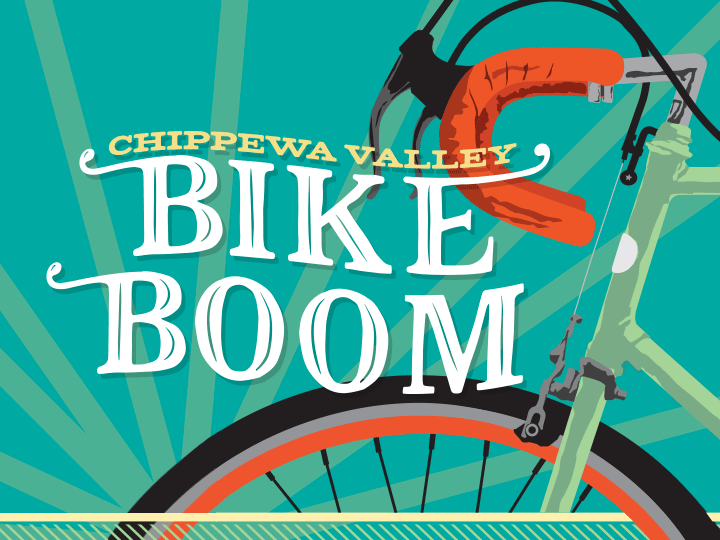 Here’s a list of things that Jenn Bast, who has been biking in the Chippewa Valley for almost 10 years, considers when she goes out for a ride. It’s not comprehensive, by any stretch, but it’s representative.

Bast, the bike manager at Scheels, is a lifelong biker who remembers riding with her family as a child, but it wasn’t until she moved to Eau Claire about a decade ago that she launched full-throttle into the sport. She discovered her love for cycling while attending UW-Eau Claire.

“I realized that the bike trails around Eau Claire are so pretty,” she said. So she took off for rides on her inexpensive bicycle. Always on course for self-betterment, Bast quickly decided she wanted to complete a triathlon. Her manager at Scheels furnished her with a lightweight bike appropriate for the sport, and she completed her first race within the year.

“It allowed me to go from thinking 10 miles was a lot to being able to do 20 miles just by changing the bike,” Bast remembers. From this point on, she was a regular racer, letting the local competition offerings guide her from the Firecracker to the Firehouse 50.

“Some people are only mountain bikers or only road bikers,” she explained.  “I like both, because they’re totally different sports.” She alternates seasonally, roadbiking in the early spring, hitting the trails as soon as they open, then spending the hot, insect-swarmed summer days back on the road. In autumn, when the bugs fall back and the air cools, she’s back on those dirt tracks. Bast rides alone and in groups, often stopping off at breweries to grab a pint after a hard ride. She used to travel for races, camping with other cyclists to save a buck and indulge her love of nature; however, she doesn’t travel as much for races, lately.Finding other woman racers to camp with is a growing challenge, she said.

“Being female is very different in the biking community,” Bast said. From personal safety to social dynamics and even clothing and equipment choices, women in biking experience the sport and its community in a different way, she said. These factors, among others, cause the sport to be less appealing to women in general, she said, resulting in a smaller proportion of females taking to two wheels. At 5-foot-1 and weighing about 105 pounds, one of Bast’s biggest personal considerations is safety, and she’s very matter-of-fact about it. She’s an independent person – she picked up the phone for our chat from her campsite at Camper’s Paradise in Nevis, Minnesota, where she was staying with her dog during a 12-day solo camping trip – but with independence comes caution. Bast has preferred trails based on how accessible they are, how well-travelled they are, whether they’re monitored by cameras or law enforcement, etc.

Through her work at Scheels and as a member of Trek Bicycles’ women’s advocacy program, Bast has learned of a number of other barriers to women’s participation in the sport of cycling, as well as how to overcome them. At Scheels, she invites customers to join her for one-on-one cycling outings and personally shows new riders the ropes.By her observation, men are more likely to learn about a new trail (or about trail riding in general!) by riding it, while women are more comfortable taking things slowly, learning the rules and tricks from a friend. She finds that many women find joining a (mostly male) group ride as a newcomer can be intimidating, while a one-on-one approach is welcoming.

“I tell people, ‘I just want to ride with you,’ ” Bast said. “That’s the culture that’s going to grow the community.”

As part of the women’s advocacy group, Bast organized all-women group rides and clinics to help people learn how to find the right gear for them, or repair their own bicycle. In her experience, women often hand off their bike to men for repairs or tire replacements.  She hopes that educating girls and women on bicycle maintenance will help them feel confident in the sport.

While maintaining boundaries in all-female groups can be difficult – “How do you tell a man ‘no, this is a woman-only space?’ ” Bast asks – it’s essential to welcome more women into the biking community, she said. Having female-only spaces allows participants to speak freely about issues many women face, such as finding functional clothing, or choosing equipment that accommodates their bodies. Women can feel muscled out of “Shammy talk,” (the discussion of bicycle seat covers), in mixed company, either from the predominance of issues specific to male anatomy, or because they are uncomfortable sharing information about female anatomy among men.

“Seeing other women makes women more comfortable,” Bast said. She still organizes the occasional all-woman ride or workshop, but there’s more to do.  She believes more investment in trails and trail maintenance, and more information accessibility, will make biking the Chippewa Valley more appealing to women, and to people in general.

How do we get people to come here? It’s not a destination, but it could be …  “How do you go from ‘Visit Eau Claire,’ to “Visit Eau Claire because of the biking scene?’ ” Getting more women on bikes and out into the trails might just be the first step.