Three Election Trends to Watch for in the Chippewa Valley

Our region’s partisan divides are deepening. Where will they fall Nov. 3?

EYES ON WISCONSIN. The race between Donald Trump and Joe Biden is tight in Wisconsin. The map shows how the state's counties voted in the 2016 matchup between Trump (red) and Hillary Clinton (blue).  (Photos by Gage Skidmore, CC-BY-SA 2.0 | Map by Ali Zifan CC-BY-SA 4.0)

Let’s start with the understanding that the coming general election may be the least predictable in the modern era. Events that would ordinarily be the signal happening of other presidential campaigns have occurred at such a rapid pace this year that one may have taken place a few hours before you read this – and it may be considered old news within a couple of days.

Yet the election will happen; knowing who will likely vote for whom is not only the job of political party members across the country down to the Chippewa Valley, but also a good tool for knowing what our neighbors desire in leadership. If a pattern can be gleaned by demographics or geography, one can know who to try and persuade to vote, and what matters to the residents in those categories. This is how elections are really won and how governance is determined.

In the lead-up to the 2016 general election, Volume One analyzed electoral trends in western Wisconsin, historically a “swing” area of the state with regard to party support. With the 2016 and 2018 general elections in the books, and the 2020 edition upon us, a reevaluation of the data is appropriate. Are certain areas trending toward a certain party? Is western Wisconsin as influenced by independence as it has historically, or is it falling into reliably red and blue categories that define much of the rest of the United States?

Here, we look at two-party (Republican and Democratic) votes in general elections from 2004-2018, alternating the high-turnout presidential and gubernatorial results. Locations examined in the Eau Claire metro area include the larger cities, some smaller cities, townships surrounding Eau Claire, and villages/rural areas.

Since some elections become blowouts, the percentage a party gets in such an election may not truly reflect its partisanship relative to the state. To account for that, we are using a variation of the Partisan Voting Index (PVI), a measurement developed by the national Cook Political Report to assess the partisanship of U.S. House districts and better understand our political climate. What I’m calling the Chippewa Valley PVI (CVPVI) compares the two-party vote percentage of a city/county in Wisconsin in a given election to the percentage across Wisconsin. For example: Gov. Tony Evers won 49.54% of the vote statewide in 2018, but 52.31% in Chippewa Falls, thus Chippewa Falls has a CVPVI in 2018 of D+3 (rounded).

A trend in elections over the past decade or so, which has accelerated in the Trump era, is growing Republican support in rural areas, with larger cities and suburbs becoming more Democratic. There’s evidence of this locally: Eau Claire’s CVPVI was around D+8 until 2016; since then, it has averaged D+13. From 2004-12, Menomonie averaged D+8; since 2014, it averages D+13.

Meanwhile, some smaller cities have trended Republican. Eleva was over D+10 each election through 2014; it is about even in the last two. Similarly, Osseo was around D+7 from 2008-14, and averaged even in ’16 and ’18. Lake Hallie, Augusta, Boyceville, Mondovi, Bloomer, and Chippewa County have had their strongest Republican margins relative to the state in the prior two general elections among all the years we examined.

The split is apparent between cities and the counties they are located within. Chippewa Falls was D+3 in the 2018 election, while the rest of Chippewa County was R+9; removing the city of Eau Claire and its D+13 in 2018 leaves the remainder of Eau Claire County at R+3 for that election (with similar splits in prior years, though with a larger gap in 2016 and ’18).

When we refer to Eau Claire, we only include those living within its city limits. This means anyone living in “unofficial” Eau Claire is left out – including notable spots like the south end of State Street, the developments around Highway 93 south of I-94, and even that bit of the town of Washington that snakes its way around London Road.

Thus, we tracked the trends in four townships that abut the boundaries of Eau Claire: Pleasant Valley, Seymour, Union, and Washington. These all cover what you could term the “exurbs” of Eau Claire (exurbs referring to the most remote regions of development in major metropolitan areas). The combination of upscale housing and rural residences leads to four areas generally more Republican than average: Pleasant Valley (R+9) and Seymour (R+4) have taken noticeable turns to GOP candidates in 2016 and/or ’18.

Despite any given trend toward one party or another, you also need to consider if an area is growing or shrinking relative to the total votes cast in the state. To wit: Chippewa County outside of Chippewa Falls has grown from .80% to .83% of all votes cast in Wisconsin, as rural voters in that area have become more likely to vote – and vote Republican. A similar effect is happening in Eau Claire County outside the city of Eau Claire. The sheer number of votes is small, but considering that statewide elections tend to be decided by just a few thousand votes, these patterns can make a difference in determining the victor.

Past is not always prologue. That was affirmed with the recent growing divide between the bluer cities and redder rural areas of western Wisconsin (and the entire nation), blossoming in size with the 2016 and ’18 general elections. This also means that we cannot assume that the gaps will stay this size as people vote this autumn.

Perhaps the candidacy of Joe Biden, or four years of seeing Donald Trump as president instead of as a candidate, will shake coalitions that we seemed to think were solidifying. Nationwide polling has shown Biden doing better with Upper Midwestern voters. We have yet to see if that translates to actual results or if that can be seen in election returns from places like Fall Creek, Cadott, and certain wards in Eau Claire.

Therefore, we will have a second part to this analysis after all the ballots are (finally) counted. With that, we will know what 2020 meant to the way we vote.

ONLINE EXTRA: HOW VOTING IN EAU CLAIRE HAS EVOLVED

Volume One contributor (and political junkie) Luc Anthony created these maps show how top-of-the-ticket voting patterns (i.e., for president and governor) have changed over the years in the City of Eau Claire’s voting wards. 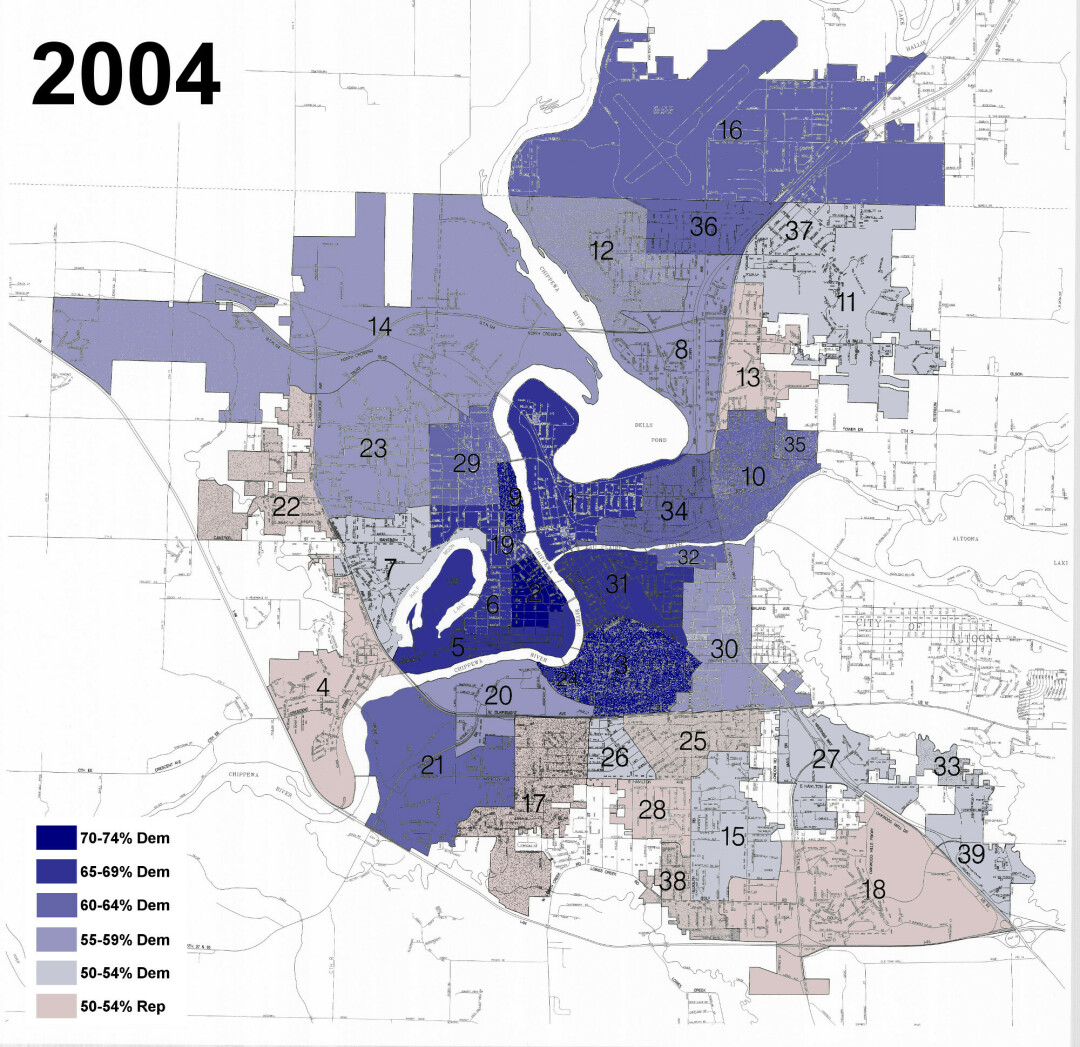 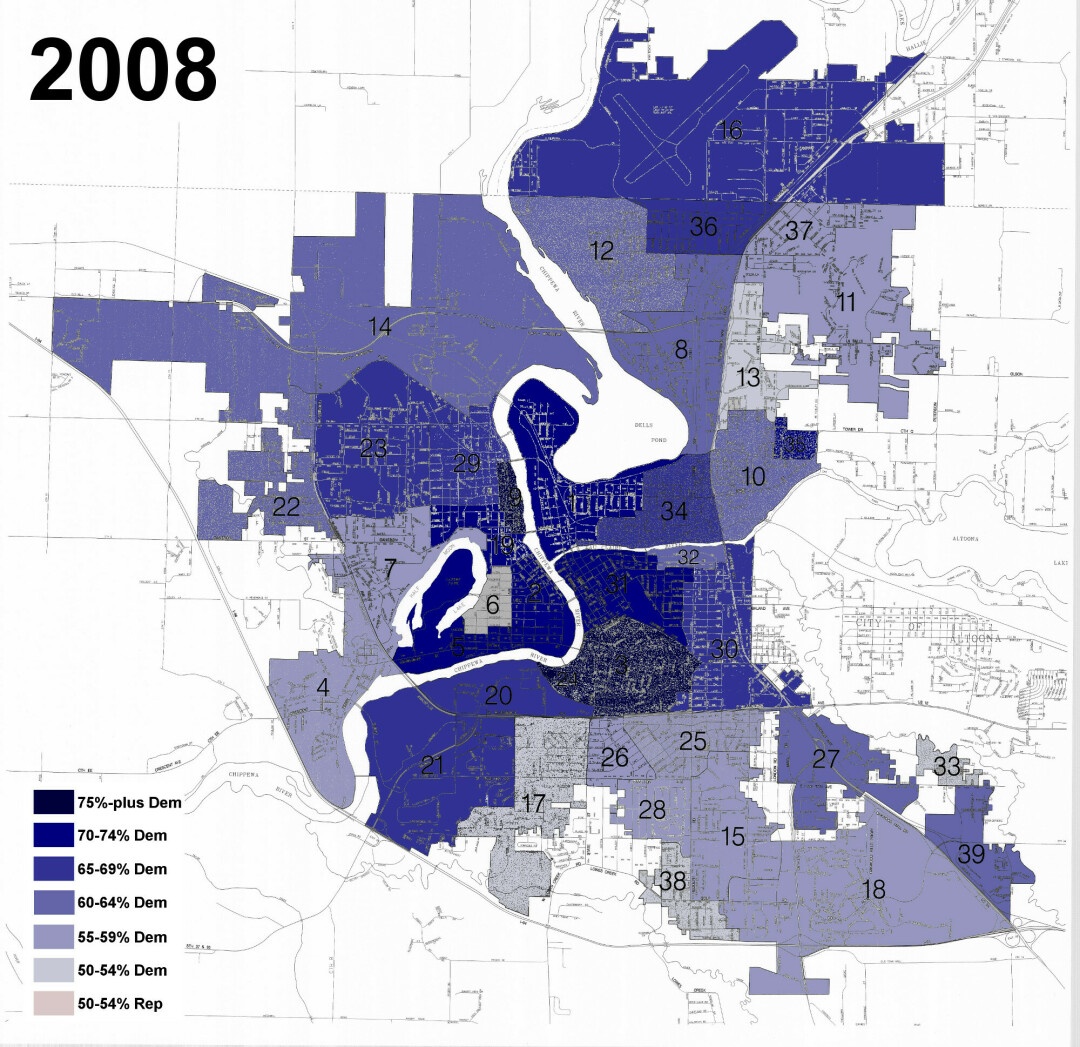 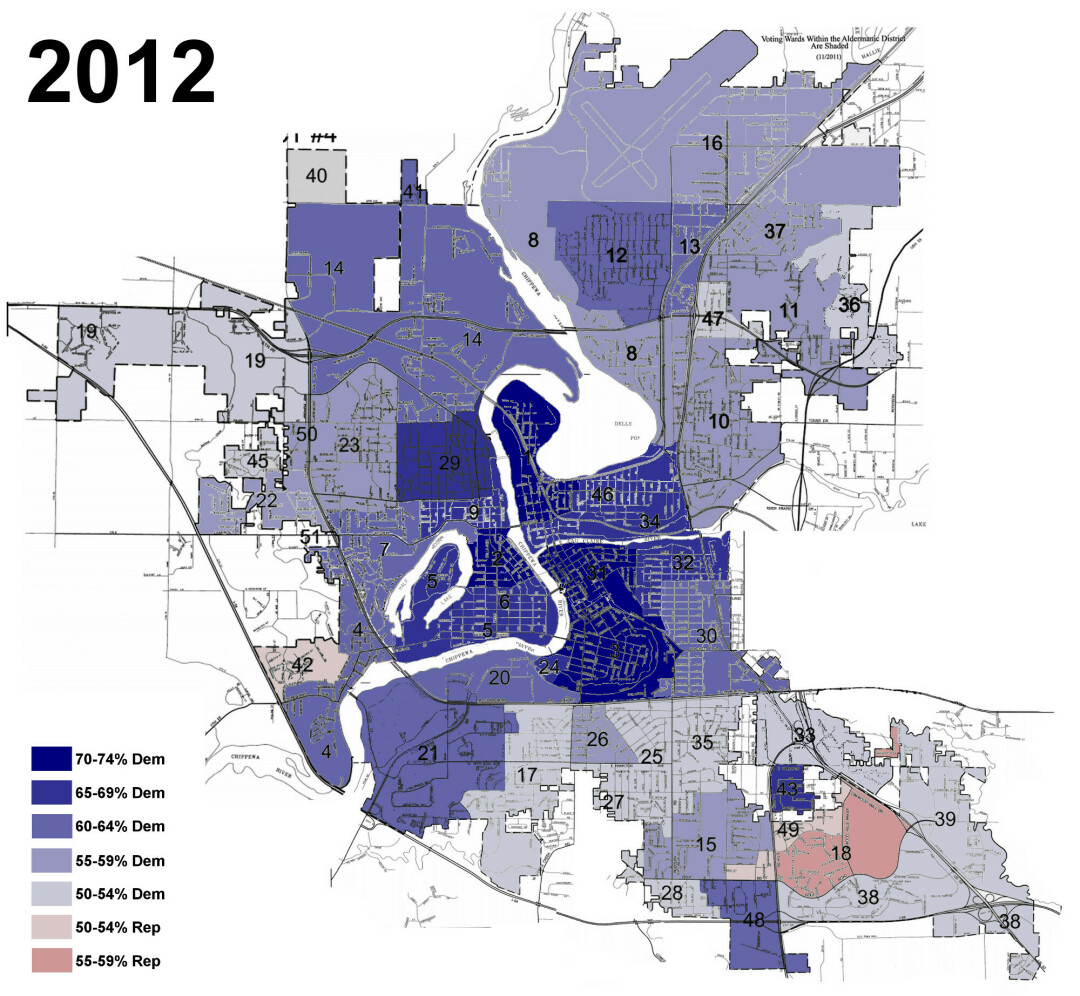 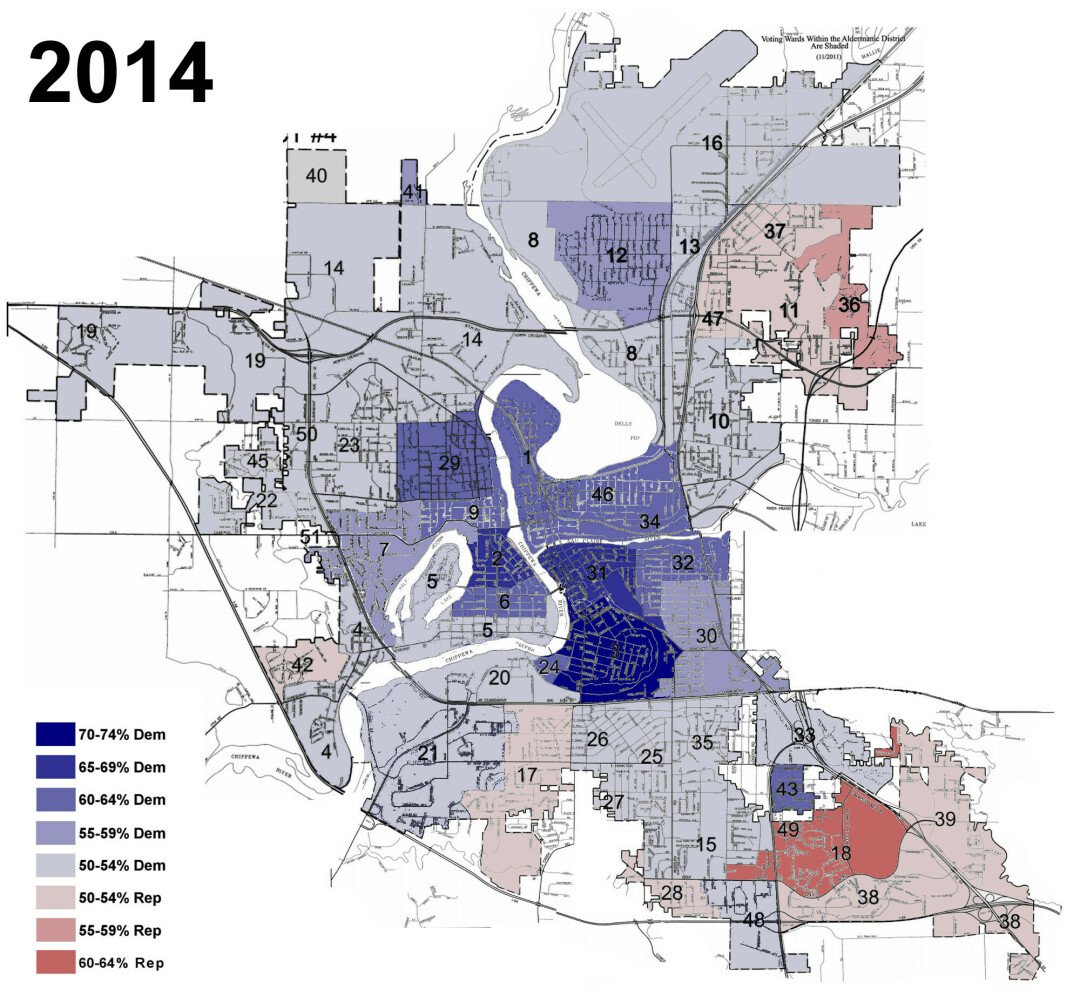 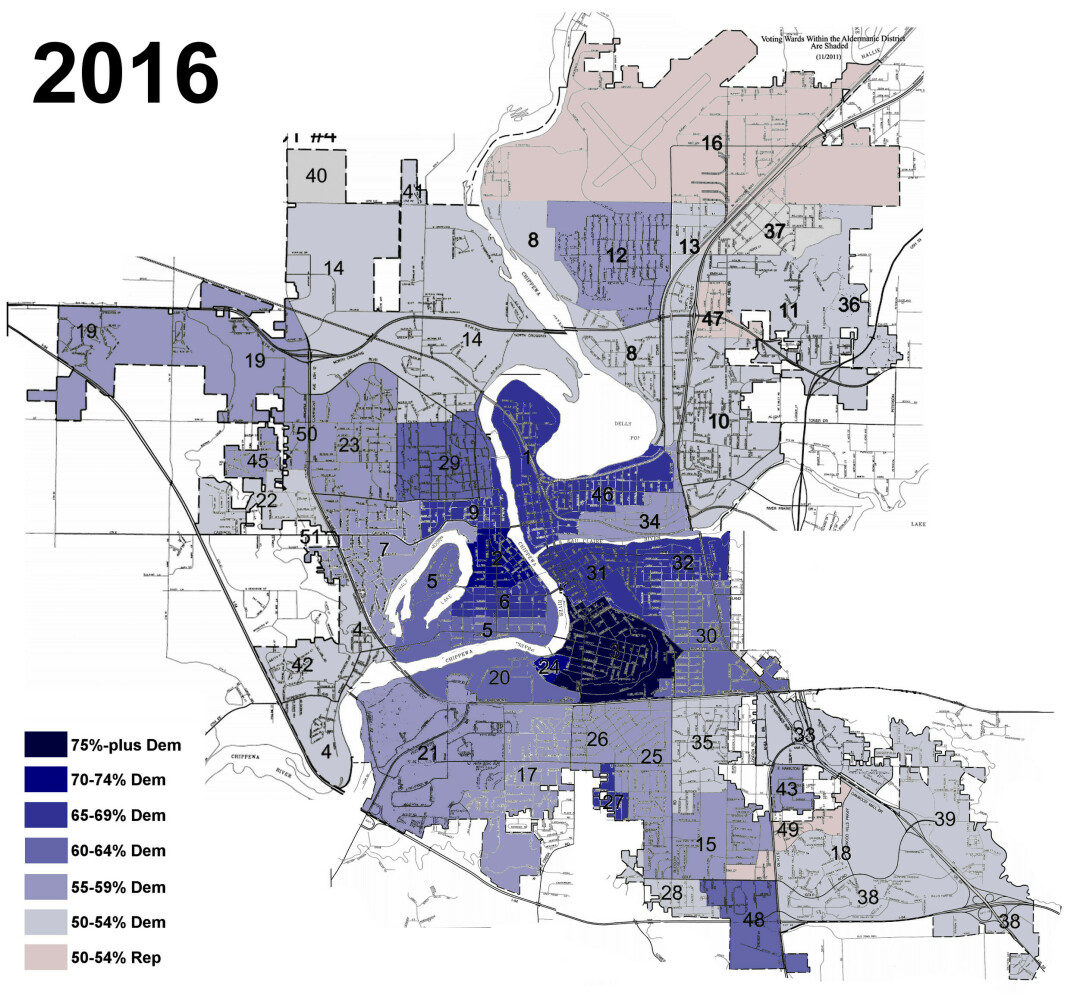 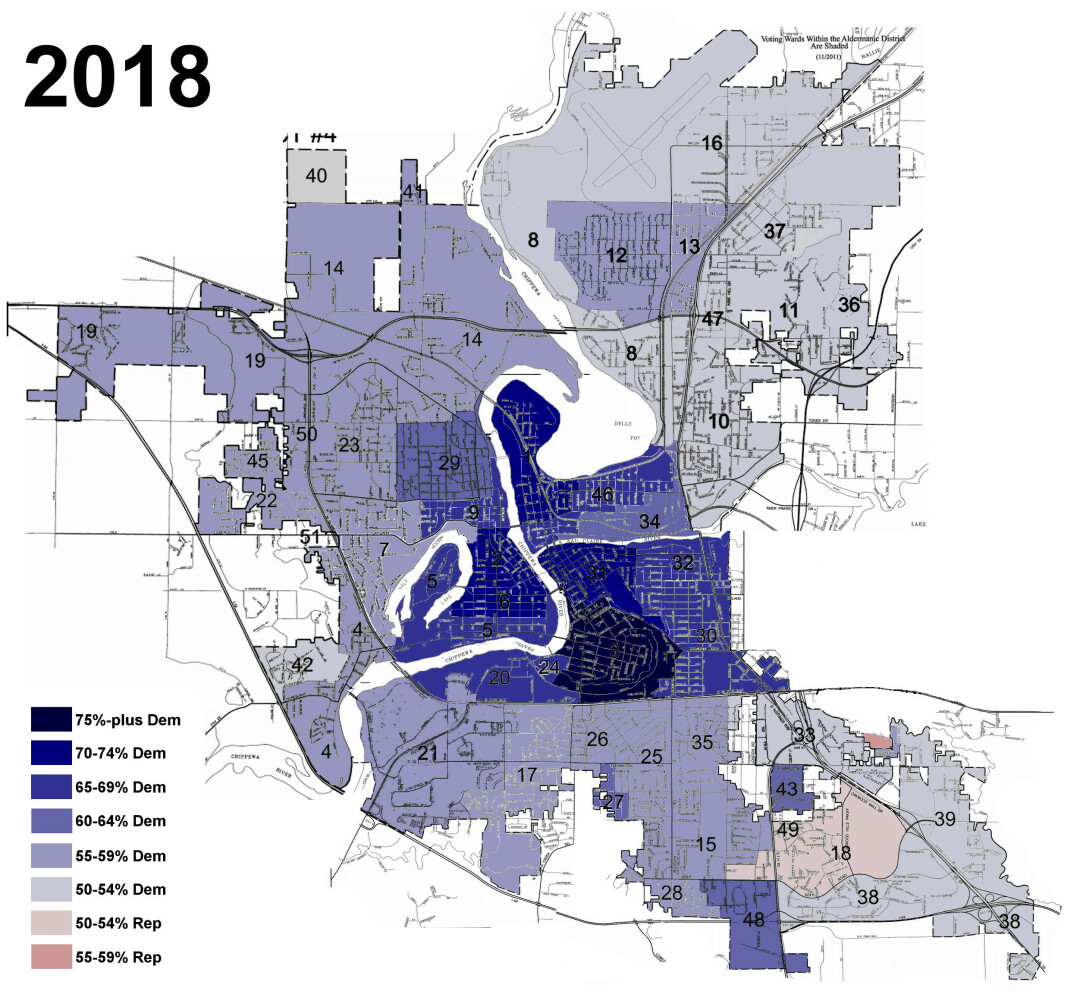