The Maribel Hotel, which showcases fantastic stone masonry and maybe a portal to hell.

Whether you’re a believer or not, Wisconsin’s towns are filled with some frightening ghost stories. The following paragraphs detail some of the of terrifying and strange experiences within our statewide phantom world.

Back in the 1920’s, the Eagle’s Club was a popular male’s athletic organization where those who could afford it “got their gym on.” It wasn’t until after the building closed its doors that strange occurrences began. Some of which include the walls of the building being cold (even during summer months), and reports of items unexpectedly being thrown off of the roof. Other reports claim a strong smell of bleach throughout the parameters, as well as sights of an apparition of a little girl laughing and running around the club’s grounds.

The Maribel Hotel, thought to have been owned by Al Capone, had been set afire sometime in the 1920’s. Since then, it is said that on full-moon nights, the building can be seen “glowing.” Aside from that, reports have also mentioned that when visitors enter the third floor, they can feel the pressure of two hands on their backs. If that doesn’t scare you enough, consider the sight of blood running down the walls (not as explicit as in The Shining, but you get the idea). This hotel comes with numerous spooks. Others reports include shouts from the basement, the ringing of bells, and the smell of sewer gas escaping from the bathrooms. Thus, reporters have given this infamous location its appropriate name, “Motel Hell.” 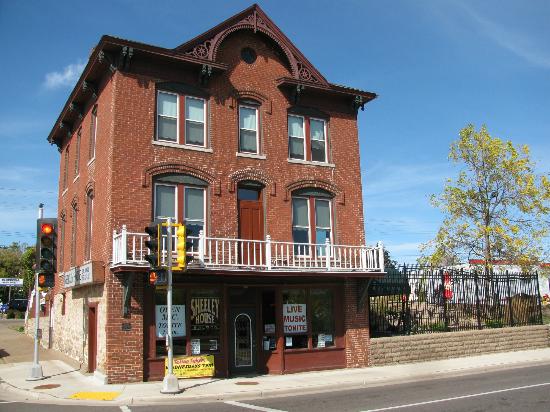 The James Sheeley House: come for the ghosts, stay for the fantastic open mic.

Not too far from home for most of us, the Historic James Sheeley House in Chippewa Falls has also – you guessed it – been labeled “haunted.” Prior to being a bar and restaurant, the Sheeley House was a boarding home when first built. Recent employees report hearing footsteps when walking around at night or prior to locking up. One story involves reappearing roses. The first owners had apparently painted roses on the wall of the building when they settled there. After the new owners had purchased the House, they decided to paint over the walls. Little did they know, the roses would bleed through and even after numerous attempts to re-paint, the initial roses would still continue to bleed through the walls. One past employee even reported being shut and locked in the freezer by an unknown source. It wasn’t until a half an hour later that the employee was able to escape the freezer – using a pick. [UPDATE 10/7/14: The Sheeley House has been closed for a while but should be reopening soon.]

Recall the infamous stories of Ed Gein, aka “The Mad Butcher?” Well, one of his unfortunate victims seems to still haunt the True Value Hardware Store of Plainfield, Wis., her last known location before her disappearance. It is said that this female phantom is seen walking aimlessly around the store with order forms in her hands, blurting out the word, “anti-freeze.” What makes this ghost tale so goose bump-worthy is the fact that anti-freeze was the what her killer had wanted to purchase the day before her murder.

Holy Hill, considered a state landmark, stands atop 400 acres of woods. It’s said Holy Hill Cemetery can reveal much more than the view of the Milwaukee skyline. Reports have claimed that visitors have trouble capturing photographs because of the “thick mist” supposedly appearing in the developed images. Witnesses have also described that when visiting at night this so-called mist begins to form, engulfing you and suddenly forming into the shape of a man. The midst then quickly disappears. Those who can attest to this also mention that they were able to identify the eyes, face, hands, and even the ghost’s beard, while simultaneously being able to see the trees behind him – right through the middle of his silhouette.