it’s exactly what it sounds like, and it’s looking to be a smashing success 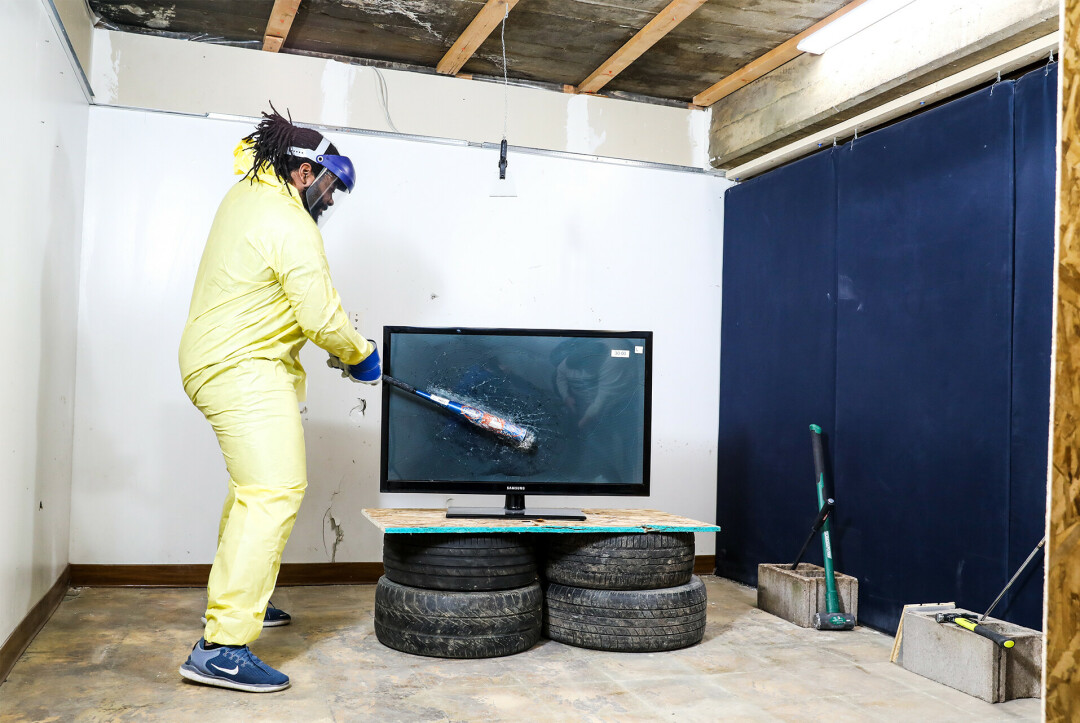 GET IN LOSER, WE'RE GOING RAGING. Everyone needs to blow off some steam from time to time, and there's a new way to do that right in downtown Eau Claire thanks to BreakThru Rage Rooms.

If you haven’t heard of BreakThru Rage Rooms by now, you must be living under a rock – and we’re about to smash that rock to smithereens. Well, not actually, but if we wanted to we could take it over to BreakThru Rage Rooms (423 Wisconsin St., Eau Claire) and do it with a baseball bat, sledgehammer, crowbar, golf club … you get the idea.

Locals JP Parker and Jessica Buss got the area’s first rage room up and running within weeks after securing their location in downtown E.C. ahead of the new year, but JP’s dream of owning a business has been long in the making.

JP worked as a DJ at iHeartMedia for the past seven years before needing to make a switch, after which he decided it was time to take his business management and marketing degrees from Chippewa Valley Technical College and UW-Eau Claire and put ’em to work for his own ideas.

After approaching Western Dairyland with his rage room business plan and receiving a near-instant go-ahead, the duo realized it was finally time. JP and Jess laughed when describing Jess as the “rock” who keeps JP grounded even while he’s chasing his dreams up in the clouds, but going in on BreakThru together has been just as fun as it has been rewarding.

“Especially for someone who came from humble beginnings, not having had anybody in my life who owns their own business, I just think it’s amazing for me to get to this point,” JP said. “It’s what my mom wanted for me, my family wanted, what we want – to succeed and to create something for ourselves.” 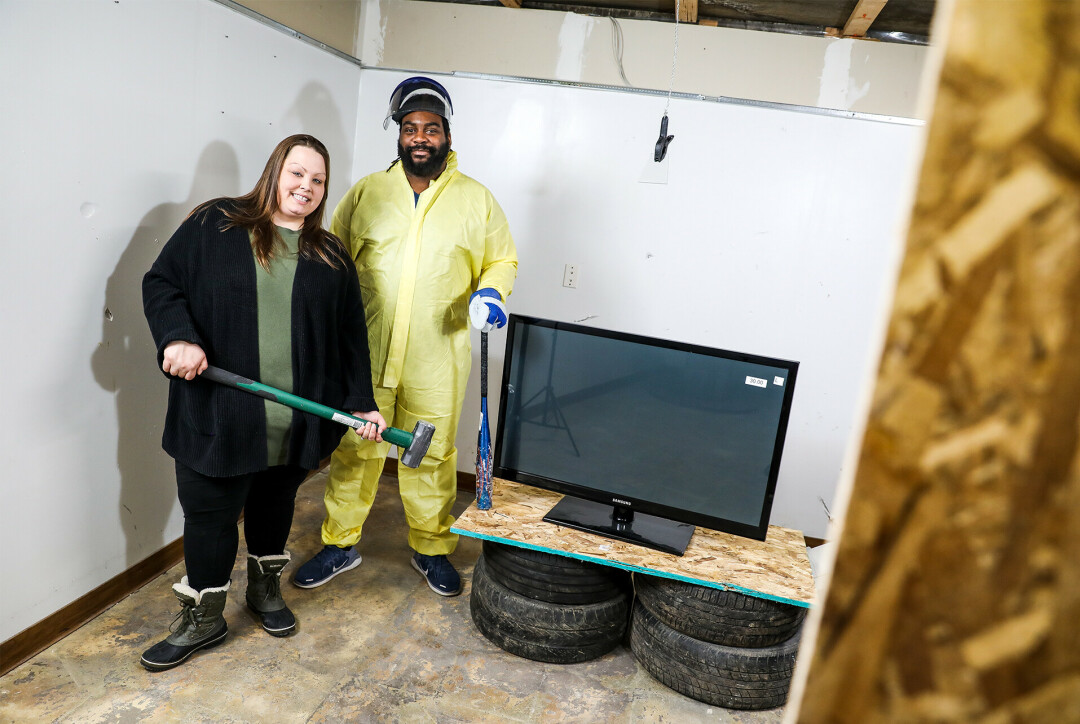 Though the duo both are still working their own day jobs, they’ve been able to pour their extra energy and passion into BreakThru. For them, too, it’s been a stress reliever, as they hope it will be for the Chippewa Valley community.

The idea behind rage rooms is just that: offering a room or space for people to “rage,” typically allowing people to smash various items to bits and pieces. At BreakThru, those items include glassware, flatscreen TVs and monitors, microwaves, desks and lamps, file cabinets, windows, and more. So far, TVs and microwaves have been the most popular items to break, JP and Jess said, with baseball bats and sledgehammers being the favorite tools of destruction.

After seeking out items people were selling for cheap or giving away free online, mostly through various local Facebook pages, JP and Jess found folks were more than happy to give them tons of items they were otherwise going to take to the dump. A similar idea is behind BreakThru’s “BYOB” option – Bring Your Own Breakables. For a fee, people can bring in just about any amount of their own items and smash them. BreakThru then will properly dispose of the remains. 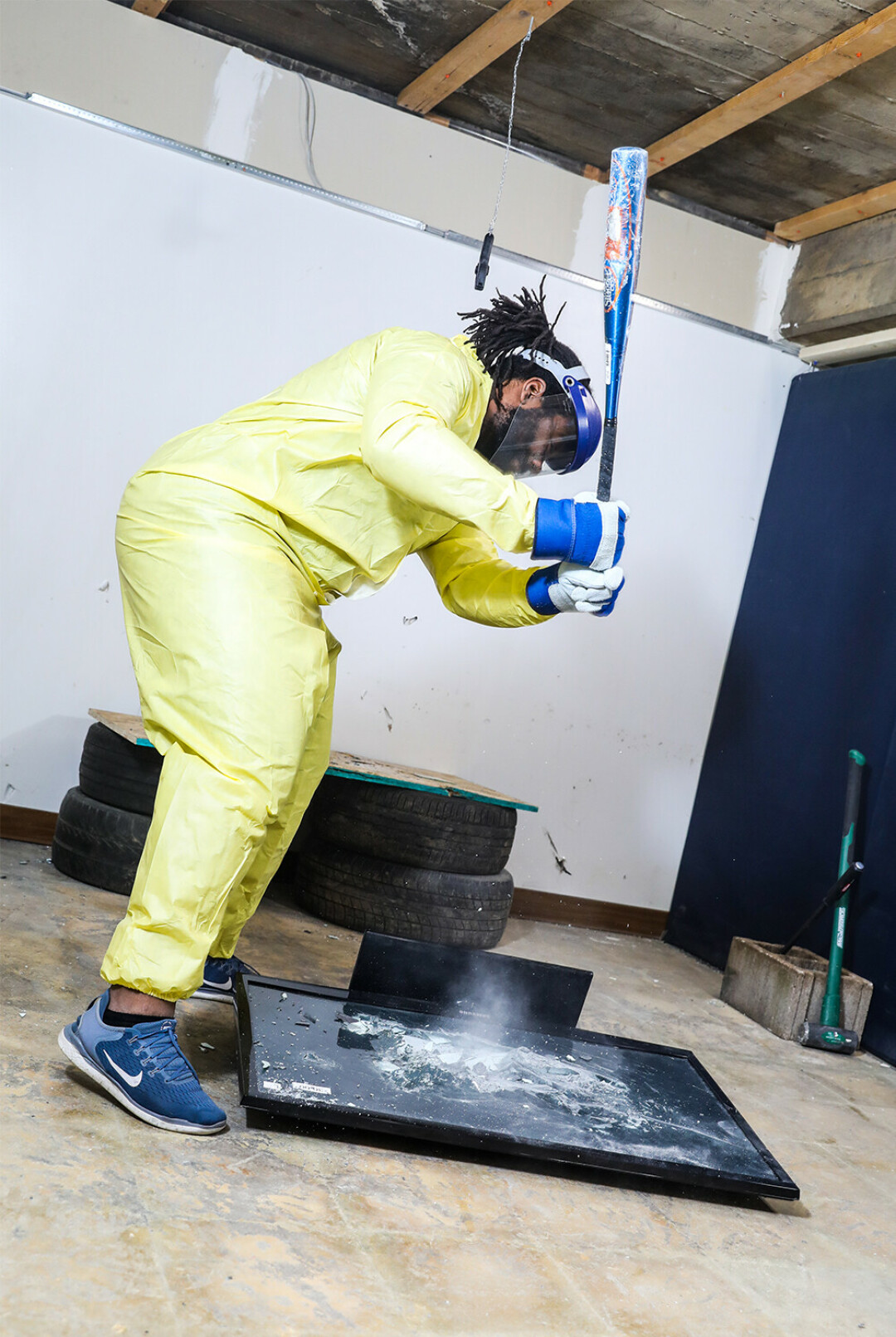 Of course, BreakThru must adhere to their insurance policy, so while they take and accept a wide variety of items, they can’t take certain things, including box-back TVs and monitors with broken screens.

BreakThru offers single and duo packages as well as small- to large-group packages, allowing folks to try it out alone or commit to going with a group of friends, family, or even coworkers and rage out.

“This feels like the type of thing that could appeal to anyone,” JP said. “I’m sure there are some folks who think, ‘Yeah, I’ve smashed stuff before,’ but you can’t tell me it wouldn’t be fun to go break a bunch of stuff with friends, in a safe, legal way.”

BreakThru has already seen a huge amount of traffic online with mostly positive responses from the community. During their opening weekend, people of all ages and group sizes came in to rage, including some families.

Open from 12pm-1am on Fridays, 11am-1am on Saturdays, and 11am-8pm on Sundays, JP and Jess are hoping the community will continue to come rage as stress relief and a fun group activity.

“Starting a business has been his dream,” Jess said of JP. “So, I don’t know what our exact end goal is, but we hope for good things and will see where we are in a year.”

Of course, participants must sign a safety waiver, and will then be fitted with a light suit, face shields, and gloves for safety, and must wear closed-toe shoes. For people 18+ years of age, anyone can participate, though BreakThru also allows 12-17-year-olds to participate as long as a parent or guardian accompanies them. 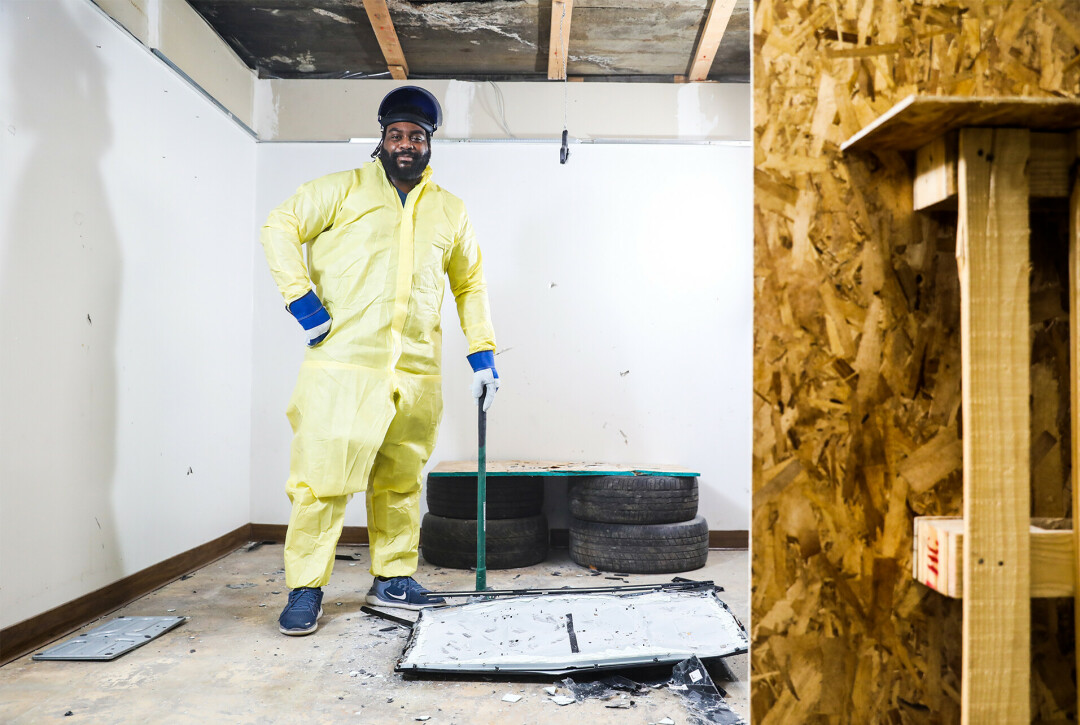 Follow BreakThru Rage Rooms (423 Wisconsin St., Eau Claire) on Facebook or reach out via email (breakthruragerooms@gmail.com) or phone ((715) 829-0011) with questions and to reserve a time to rage.