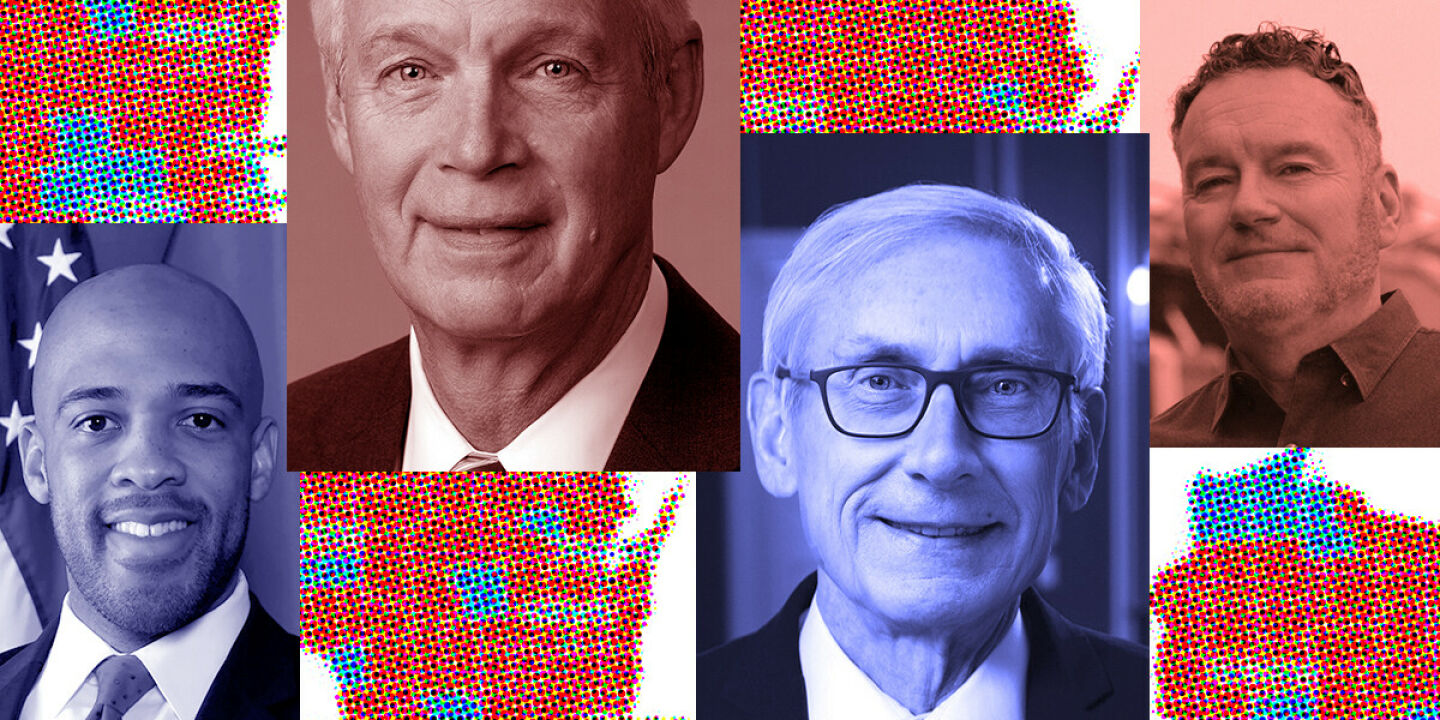 Election 2022: No Waves, But Plenty of Currents 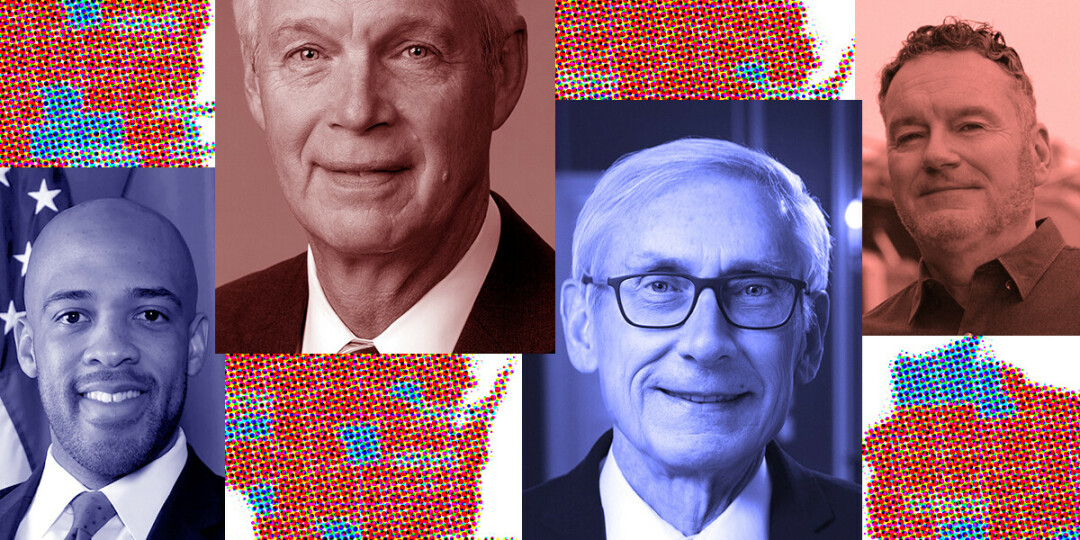 If ever a midterm election were to be known for disparate takeaways, the 2022 edition would fit that description. This was not a national “wave” election in one political direction: Democrats and Republicans certainly had success in different states, but no pattern was seen across the country like in 2018, 2010, 2006, and 1994, to cite a few recent wave years.

Such results extended to Wisconsin, with multiple candidates from both major parties winning statewide elections, albeit all via single digits. A Republican – Derrick Van Orden – will represent Eau Claire and Wisconsin’s 3rd Congressional District for the first time in 26 years, but otherwise, the electoral status quo mostly held in the Chippewa Valley.

What can we glean from the 2022 midterm elections?

In reviewing the 2020 elections, I developed a version of the oft-cited Cook Political Report Partisan Voter Index measurement to assess Chippewa Valley cities and counties. The Wisconsin PVI reflects the partisanship of a given city/county compared to the statewide two-party (Republican and Democratic) result of either a presidential or gubernatorial race in general elections going back to 2004.

For the most part, the trends of increasingly Democratic urban and increasingly Republican rural areas stayed in place, perhaps slightly accelerating. The City of Eau Claire is now about 14 points more Democratic than the state; Altoona is up to D+6, and Menomonie is D+10. Conversely, Chippewa County has now spent two consecutive elections about 10 points more Republican than the state, despite Chippewa Falls still being slightly-more Democratic than the entire state; Bloomer is up to R+17. Dunn County has gradually shifted from D+3 in 2004 to R+6 in 2022.

Over the summer, we assessed the PVI of our local congressional and legislative districts after redistricting. Assembly districts like the 29th, 67th, 68th, and 93rd are all around R+10, and their Republican candidates all performed at or beyond that number; the same applied to Democrat Jodi Emerson in the D+12 91st District. One of the few swing districts in the state is the 31st State Senate District, and the incumbent, Democrat Jeff Smith, nearly matched its PVI of R+1 with 50.4% of the vote. 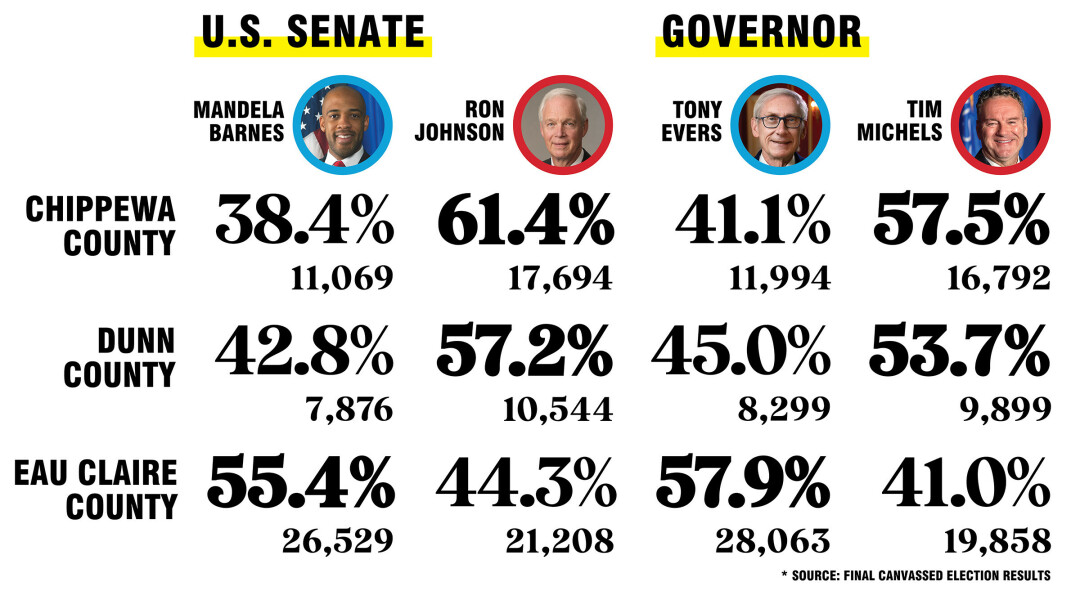 As noted earlier, both Republican and Democratic candidates won statewide, providing evidence of ticket splitting. Over recent decades, that tendency has declined, with more voters choosing to vote for one party en masse, but it has not disappeared from elections.

For example, take Ward 42 on Eau Claire’s southwest side. That ward gave Democrat Tony Evers 58% of the two-party vote for governor, 54% for Democrat Mandela Barnes for U.S. Senate, and 51% for Republican Don Henning for Eau Claire County sheriff.

In all but one ward, Evers got the highest percentage of Democrats running among those three races; Henning had the highest among Republicans. Considering the three contests each had around 29,300 votes cast in Eau Claire between the two parties, this indicates that there were Evers-Barnes-Henning voters, as well as Evers-Johnson-Henning voters who also chose Republican Ron Johnson over Mandela Barnes. 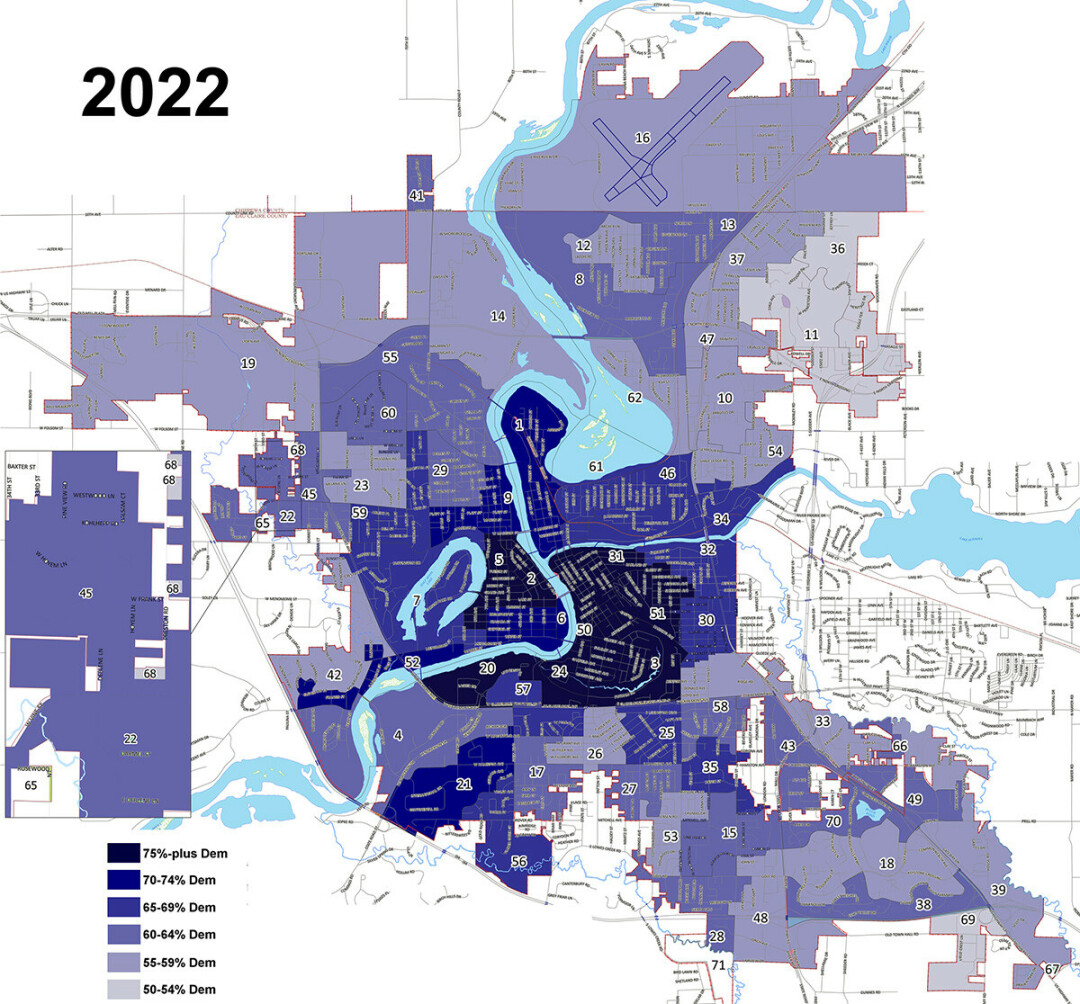 OUT OF THE BLUE. This color-coded map shows the partisan tilt of the City of Eau Claire by ward in the 2022 governor's race. Click here for a larger version. (Graphic by Luc Anthony)

... We will likely need to see a presidential election year to know for sure. A general national consensus is that the 3rd Congressional District, considered a classic “swing” district despite Democrat Ron Kind winning 13 straight races, is trending Republican. That assessment came from Republican Donald Trump’s results there in 2016 and 2020, and the aforementioned rural drift to the right.

While many national prognosticators had the district likely to go GOP in the wake of Kind’s retirement, Van Orden won the district about 52-48% over Democratic State Sen. Brad Pfaff – a result closer than in many predictions, though perhaps to be expected given the historic “tilt” nature of the district.

However, the total two-party vote in Osseo for the 3rd District fell from 933 in 2020 to 729 this year; Eleva dropped from 335 to 275.  In fact, Van Orden received 8 fewer votes in Eleva this election compared to the last one, while Pfaff had 52 fewer votes than Kind.

Turnout is almost always highest in presidential years, and the drop-off in this midterm for the 3rd Congressional District vote in those two cities will likely be filled back in come 2024. The questions are whether those inclined to vote Democratic for this race stayed home this year, if some Kind voters are now up for grabs, and/or if Van Orden’s incumbency will keep his percentages intact regardless of the number of people who go to the polls.