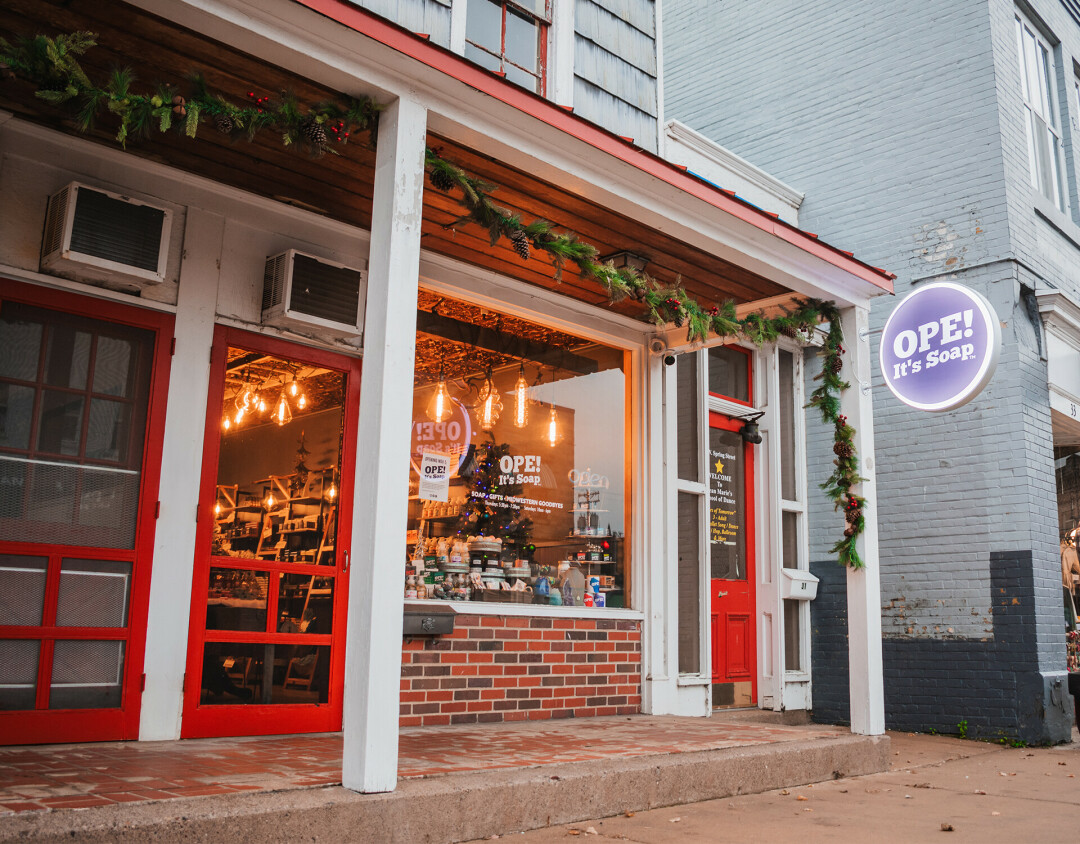 DONTCHA KNOW?! Ope It's Soap is finally opening up shop in its a space in Chippewa Falls on Saturday, Nov. 5, and folks are as excited as ever.

Folks have been cupping their hands and peering into the shop’s front window for weeks now, and founder (and soap-maker) Tony Liedl has been busy sprucing the joint up in anticipation of its opening. Having announced in July that they were moving into the shop (previously Josef’s Cheesecakes), Tony and his family have been hard at work transforming the space.

Customers will notice the shop also houses jewelry (some made by Kevin, Tony’s husband), crystals, CBD products, Ope It’s Soap mugs and merch, and more, additions Tony has had fun curating and unboxing on social media.

“(The store is) all about cleanliness and health, and now we’re just expanding that from cleanliness on the outside, to the inside, too,” Tony said, explaining his longtime fascination with crystals and spiritual health. 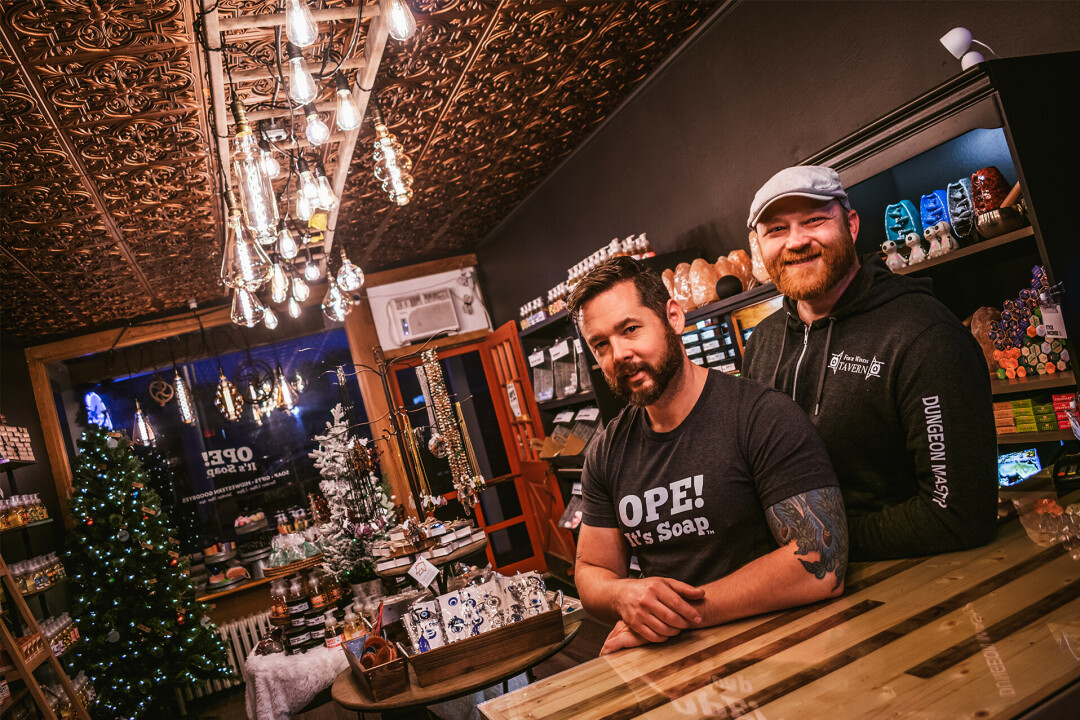 DYNAMIC DUO. Tony (left) and Kevin (right) got married a handful of years ago after meeting at Chippewa's Sheeley House Saloon, and the duo have been holding each other steady while ramping up for the store's grand opening.

With major kudos going to his brother (who’s a carpenter), perhaps the most eye-catching physical change to the store space is the rich, intricate ceiling reflecting off of the exposed lightbulb fixtures. Casting warm light on Ope It’s Soap products, the store displays also highlight the new, limited edition Christmas items only available at the brick-and-mortar store.

“My website is going to be very bare bones,” Tony said. “It’s just going to be my signature collection because right now, I can’t keep up with stocking the website and a store while working my full-time job for Royal Credit Union. So, hopefully it will create interest and people will come into the store to see.”

Tony pointed out Ope It’s Soap’s very limited edition, in-store only, Christmas-themed soaps that will be up for grabs on opening day. “I’ve only made 100 of each and they all have naughty sayings on the back, and I think that’s kind of fun,” he shared. “There’s a Krampus one that has a marshmallow, fireside scent, and another with badass Santa on a motorcycle that’s almost a leathery smell.” 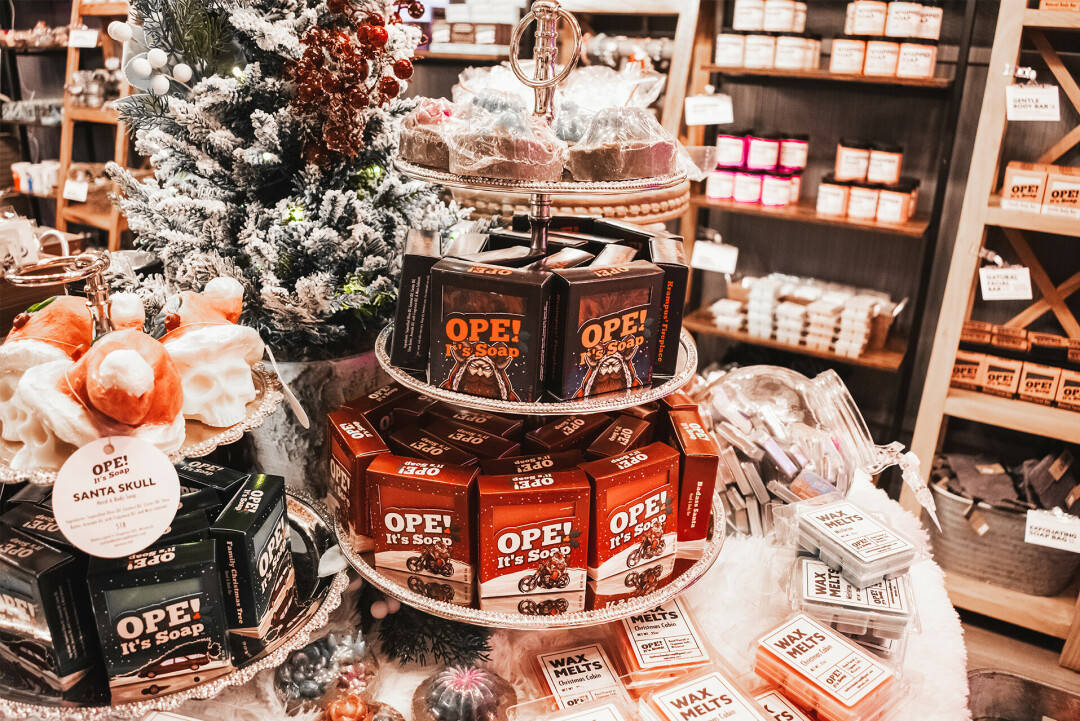 Tony also created a Christmas Vacation themed soap, complete with a carved car and Christmas tree atop it, roots dangling off and all. Each Christmas-themed item has its own unique, vibrant packaging too, Tony’s graphic design job totally coming in clutch with his Ope It’s Soap biz, as he creates all the packaging.

There will be special deals going on for the opening day as well, with the storefront fully stocked with favorites such as the staple carved soaps and signature collection, body butter, beard balm, and Ope’s whipped soap varieties, which are quite popular, Tony said.

Community support has already been overflowing for months since the announcement of the store’s soon-to-come opening in Chippewa Falls, and as a homegrown local himself, Tony said the entire Ope It’s Soap journey has been an exciting rollercoaster since the start. 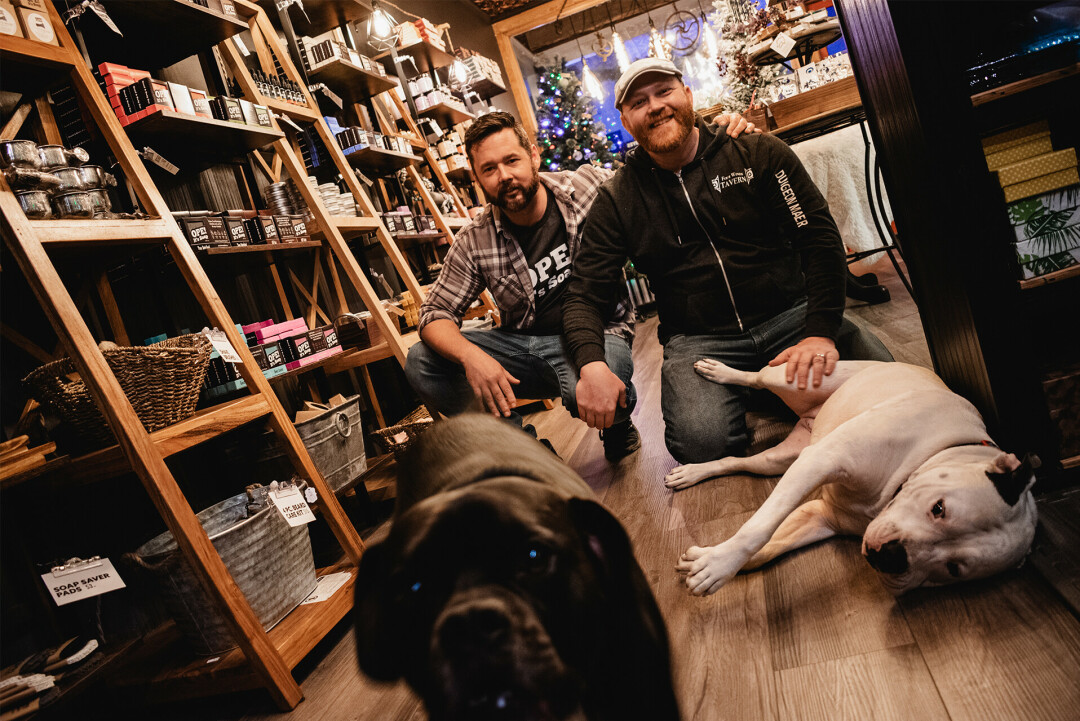 Tony and Kevin with their two fur babies Willy (left, a total camera lover) and Molly (right), goofin' around in the new shop.

What began as a hobby ignited by his interest in soap-making then turned into selling his products during initial COVID-19 years, offering local pick-up from his back doorstep, and has quickly become a thriving business with deals with Leinenkugel’s, Jolly Good, and a shoutout from comedian Charlie Berens (who was invited to the grand opening, but unfortunately can’t make it due to a family wedding on the same day).

Tony said several Chippewa businesses have reached out to offer kind words of support and excitement for the new store, and alongside all the help from his family in renovating the space, his husband Kevin has been his steadying force from the beginning.

“He helps me out more than he thinks. Like today, I had a billion things to do for the opening and things that needed labeling, and Kevin just came in and started doing it. It’s stuff like that that just makes me feel so much better, and like I said, this business would not be opening, this store would not be opening, without you,” Tony said to Kevin, the duo sharing a sweet moment (that may or may not have been a tearful one as well – I don’t cry-and-tell).

The shop is really the duo’s pride, Tony said, and while he’s adamant he is just hopeful folks will swing by and check out the space and its exclusive products, Kevin said he is prepared for a whirlwind of excited chaos on opening day.

“In my wedding vows I said, ‘Tony makes dreams into reality,’ ” Kevin recalled. “So at a certain point, with everything he comes up with, like with the store, I just say ‘You tell me what you need to make it happen, and I’m here.’ ”

Ope It’s Soap will be open Thursdays from 5:30-7:30pm, after Tony is done with work, and on Saturdays from 10am-6pm. For now, Ope It’s Soap will only be stocking its own storefront and featuring its signature collection online, so stock at other retailers will be on pause for the moment. 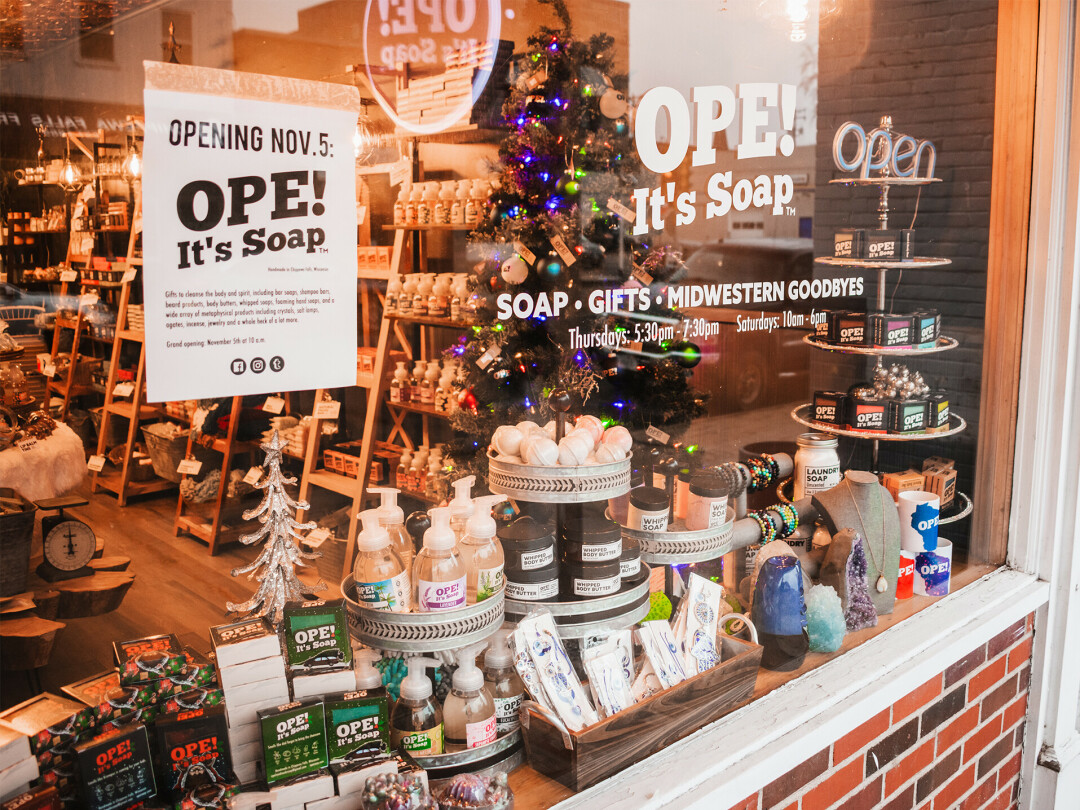 You can still snag Ope It's Soap’s signature collection online (opesoap.com), and starting Nov. 5, folks can swing into its Chippewa Falls location, 29 W. Spring St., on Thursdays and Saturdays.