Redistricting 101: How Legislative Maps in the Valley Have Been Redrawn

Which district do you live in? For the state Legislature and Congress, it might change starting this fall 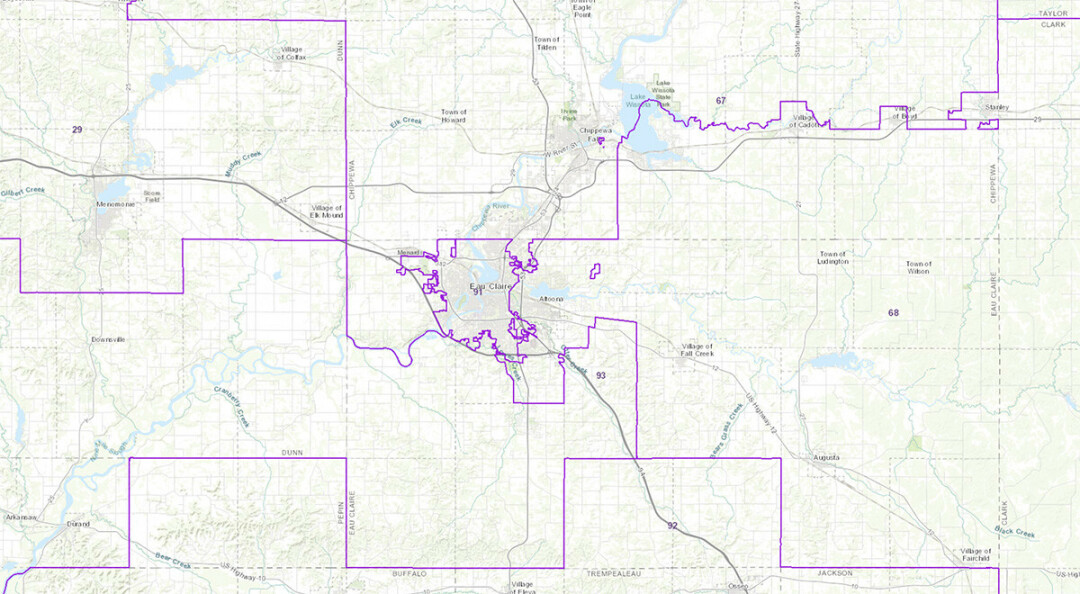 MAPPING IT OUT. This detail map, taken from the Wisconsin Legislature's website, shows new state legislative boundaries in the Chippewa Valley, which will be in effect starting with this fall's elections. (CLICK FOR A BIGGER VERSION.)

Now that it appears all Wisconsin legislative and congressional redistricting is complete for the 2022 election, we can evaluate what changed. After the lines have been moved to adjust for population shifts identified in the 2020 U.S. Census, do you live in a new district?

The late-March/mid-April rulings by the U.S. and Wisconsin supreme courts did not affect the new congressional maps. Given that the state court chose Gov. Tony Evers’s “least change” map, the boundaries of the 3rd and 7th Congressional Districts in the Chippewa Valley are quite similar to what we have seen since the 2012 congressional election. In fact, these are the only local line modifications: Cadott and surrounding areas, plus Boyd, have shifted from the 3rd District to the 7th District.

What the aforementioned court rulings did affect was state legislative boundaries, with the state Legislature’s submitted maps – drawn by their Republican majority – put into place. While not as “least-change” as Evers’s maps, the Assembly lines are relatively similar to what has been in place for a decade, though a good number of Chippewa Valley folks outside Eau Claire will have new district representation in Madison. (Follow this link for an interactive map on the Wisconsin Legislature’s website.)

The 91st Assembly District, with incumbent Rep. Jodi Emerson, is practically unchanged.  It still mostly conforms to the exact Eau Claire city limits, except for the Oakwood Hills, Princeton Valley, and Chippewa County parts of the municipality.

While redistricting is supposed to be a once-per-decade occurrence, there is a possibility our congressional and legislative boundaries may move again before the 2024 election.

Outside the city, more noticeable changes occur. The 67th District, with incumbent Rep. Rob Summerfeld – already including Chippewa Falls, Bloomer, and Cornell – now stretches into Lake Hallie, the Chippewa Valley Regional Airport region, and the Princeton Valley neighborhood. Those places had been in the 68th District (now an open seat because Rep. Jesse James is running for state Senate), which covers Altoona, Fall Creek, and Augusta; that district now takes in the Oakwood Hills/Mall region, and development south of Eau Claire towards Walnut Road.

Meanwhile, the 93rd Assembly District, represented by Rep. Warren Petryk, gains River Falls, Pepin, and other rural areas, but loses the Town of Union to the 67th – the latter district giving Elk Mound and Colfax to the 29th Assembly District (with Rep. Clint Moses).

While redistricting is supposed to be a once-per-decade occurrence, there is a possibility our congressional and legislative boundaries may move again before the 2024 election, for differing reasons. A lawsuit may be filed challenging possible Voting Rights Act violations in the Assembly map’s number of districts likely to elect a black representative; such issues were behind two recent supreme court decisions, but were never fully sorted. The congressional map’s fate may stem from who wins the race for governor. Since Evers, a Democrat, had rejected the GOP-controlled Legislature’s proposed congressional map, the Legislature could, next year, again pass their preferred map knowing that a new Republican governor would sign it into law.

The things we know for sure: People move, politics change, and lines will be redrawn. The thing we don’t: How often that redrawing will happen.

Want to find out where the new – and old – district boundaries are? Click here for the Wisconsin State Legislature’s interactive map.

The average partisan makeup of each district made some slight moves. If statewide Republican and Democratic candidates had a 50-50 race, here’s how much our local districts are tilted toward one party’s or another by percentage points: