[UPDATE] City Council Delays Decision on Liquor Licenses for The Plus, The Metro 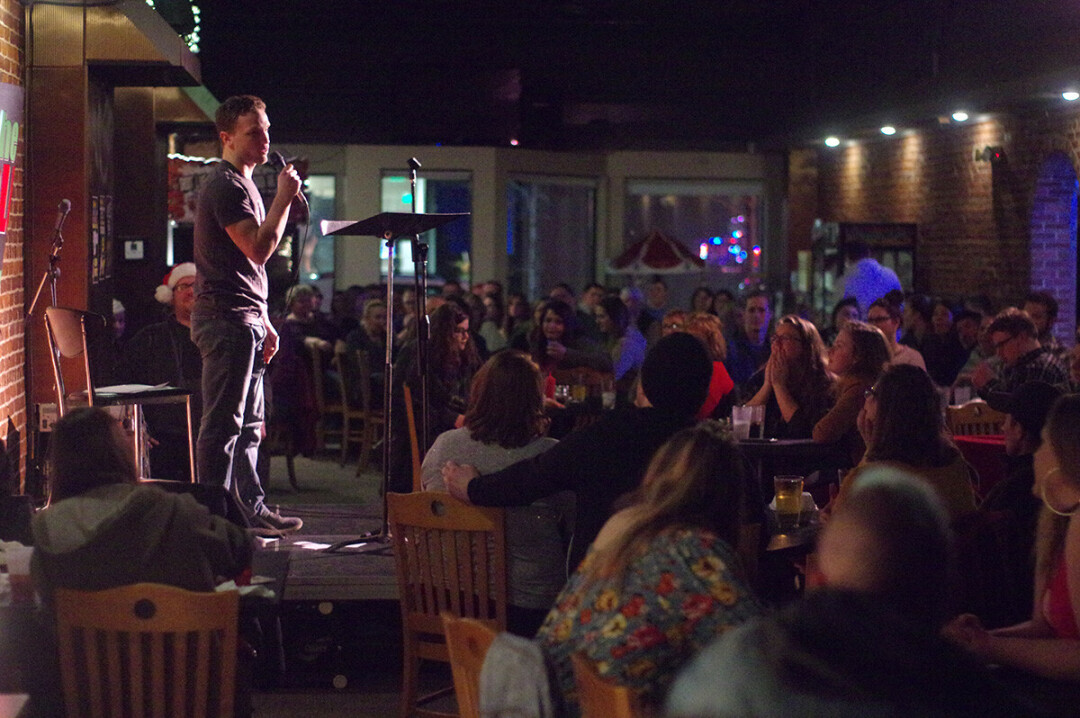 TAKING A STAND. A comedy performance at The Plus in 2018.

The Eau Claire City Council voted this week to delay its decision to renew or revoke the liquor licenses for several downtown venues until its May 24 meeting.

Jenessa Stromberger, an assistant city attorney, requested the postponement, telling the council on Tuesday, May 10, that she had met with Benny Haas – who owns both The Plus and The Metro – this week. The council then voted unanimously to postpone its decision until its next legislative meeting on Tuesday, May 24.

At a May 9 public hearing, the council heard public comments in favor of allowing the venues to maintain their liquor licenses despite their long closure.

Cullen Ryan, who previously worked at The Plus (208 S. Barstow St.) and booked comedy and music acts there, told City Council members that they should grant the venues more time to re-open.

“We need places like The Plus to thrive to be the city that loves the arts like we claim to be,” said Ryan, manager of Converge Radio and himself a stand-up comic. “We can’t just have free bar shows where people don’t get paid at all and then the Pablo Center. There have to be those places in between. My experience since moving to Eau Claire in 2012 is that The Plus has done that better than everywhere else. I have been a producer for years, I have worked with dozens upon dozens of business owners, booking agents, and managers, and it is by far the best place to the arts that I’ve ever worked with.”

We need places like The Plus to thrive to be the city that loves the arts like we claim to be.

Ryan noted that within the past five years, The Plus had hosted at least six Grammy-winning artists and featured an early performance by Sarah Sherman, who joined the cast of Saturday Night Live during the current season.

As Volume One reported last week, the city attorney’s office has asked the City Council not to renew the liquor license for both The Metro and The Plus, the latter of which also covers The Rev, an adjacent wine bar also operated by Haas. While The Rev has been open periodically, The Metro and The Plus have remained close since the COVID-19 pandemic began in 2020.

Haas said in an interview last week that he wants to retain the licenses and is willing to pay for them, saying he still intends to re-open the venues although several financial and logistical setbacks have kept him from doing so.

Haas has owned The Plus (208 S. Barstow St.), formerly known as Pizza Plus, for the past decade. Under his ownership, the pizza restaurant and bar grew to host a wide range of entertainment, from weekly comedy nights and open mics to performances by local and touring musicians.

In 2017, Haas opened The Metro (210 E. Lake St.), a music hall and event center in what had been the Boys & Girls Club. The Metro hosted everything from well-known touring musicians to wedding receptions.

In a May 4 memo to the Eau Claire City Council, the city attorney’s office contended that the liquor licenses for both establishments should be considered “abandoned” because “the businesses have been closed for extended periods of time beyond the 90 days permitted by city ordinance and failed to provide accurate plans for reopening.”

Haas said he has tried to work with the city to keep them updated on the status of his venues, but that he feels “just kind of stabbed in the heart.”

“It seemed like whatever I said, it didn’t make a difference,” he said of working with city officials to work toward reopening. “They’d already made up their mind a long time ago.”

Read more about the situation in the May 6 Volume One article.