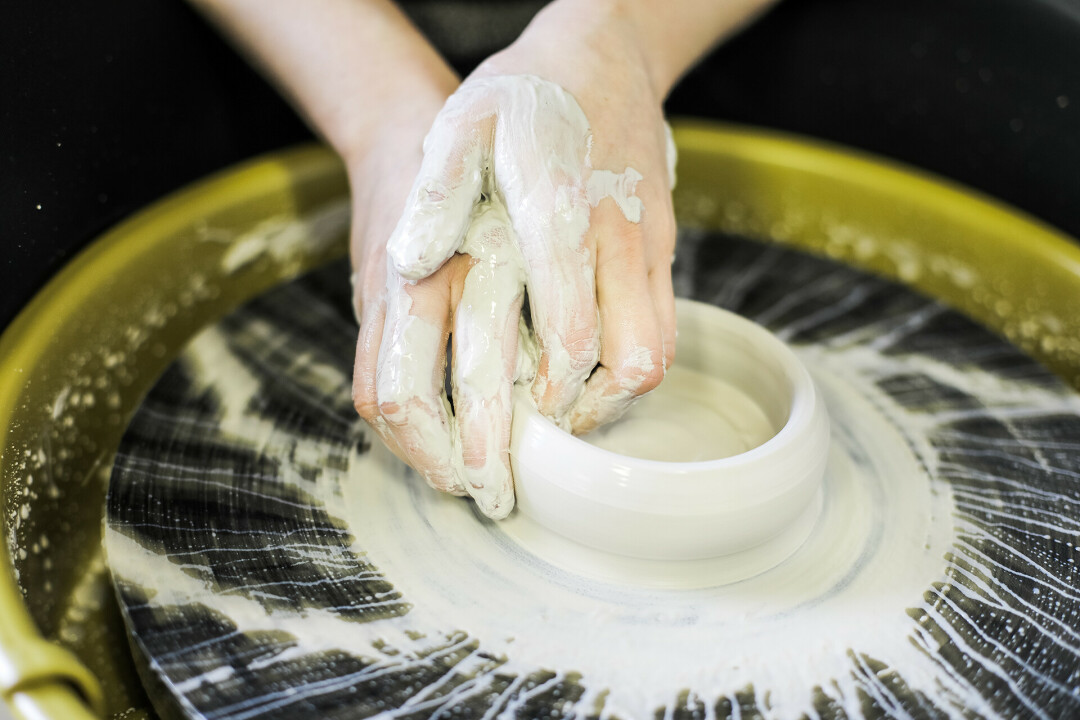 PRETTY SLICK. Half Moon Clay Center offers opportunities to get hands on when it comes to making pottery. Owner Whitney Stuart (whose hands are pictured here!) opened her new business in the hopes that it will be a home for amateur artists in the Chippewa Valley.

At the beginning of 2019, Stuart and her partner decided to travel around the globe. They sold all of their belongings, got rid of their apartment, and began living in AirBNBs with the goal to embark on a journey to Asia beginning in spring of 2020.

Well, you know how that went.

After the COVID-19 pandemic spread to the U.S., the couple decided to move to Spooner, where Stuart’s partner’s mother lived. A couple of months later, they laid down their roots in Eau Claire.

“I feel like I’ve given up complete control of everything because of the pandemic," Stuart said. "When you’re living out of a suitcase, that got old, and not having my own space got old. And it was like, I literally cannot control any of this, so just like, whatever. And when stuff started falling together, it was like, fine, I guess I own a house now. OK.”

it's such an artistic community, and there's so many opportunities. There's so many artists here. So I was like, there's got to be somebody that's got a pottery studio here.

Owner of half Moon Clay Center

As the Georgia native adjusted to life in the Midwest, she quickly noticed familiar things that were missing. Most noticeably, she saw a lack of pottery studios and classes – since she had begun taking classes to learn pottery herself before the pandemic. When she made the move to Eau Claire, she wanted to continue learning pottery, but there were no real opportunities. She rented a pottery wheel from a studio in Minneapolis, but the $300 monthly fee quickly became unsustainable.

“It was surprising to me that Eau Claire didn’t have anything like that," she said, "because it’s such an artistic community, and there’s so many opportunities. There’s so many artists here. So I was like, there’s got to be somebody that’s got a pottery studio here.” 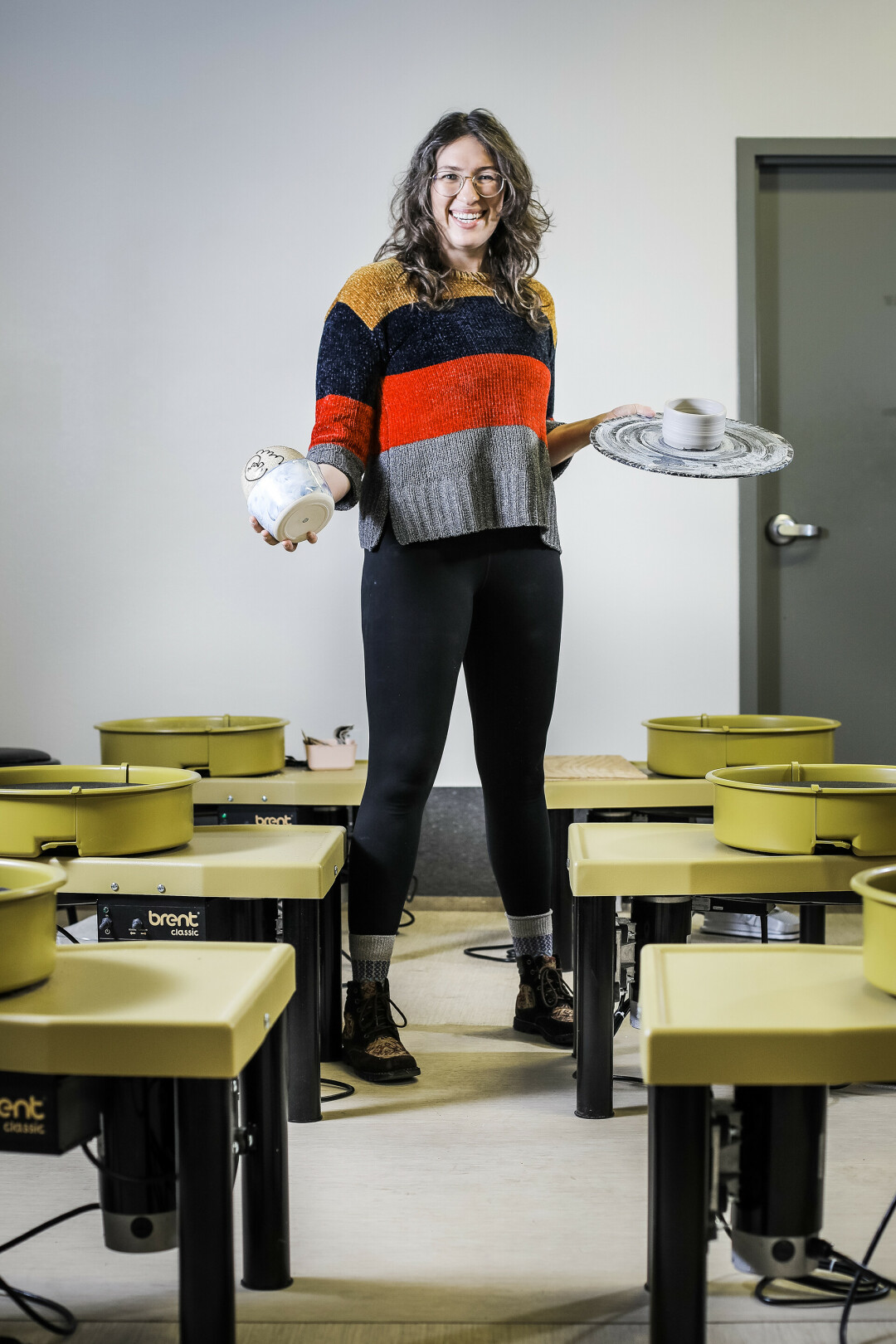 Sip N' Spin classes at Half Moon Clay Center offer guests the chances to eat and drink while taking in a pottery class. Photo by Andrea Paulseth.

Enter Richard “Dick” Milheiser, also known to Stuart as “Mr. Rogers but with clay” – a former teacher at Altoona High School, who offered to share some of his studio space with Stuart. As she became more comfortable with pottery, she began selling her work, but her customers all seemed to ask the question she had been asking all along: Where can I take pottery lessons?

After a little bit of prodding from Milheiser – and a studio space that became available at Banbury Place – she decided to dive right in without hesitation. The result is Half Moon Clay Center, a pottery studio that officially opened Dec. 16. 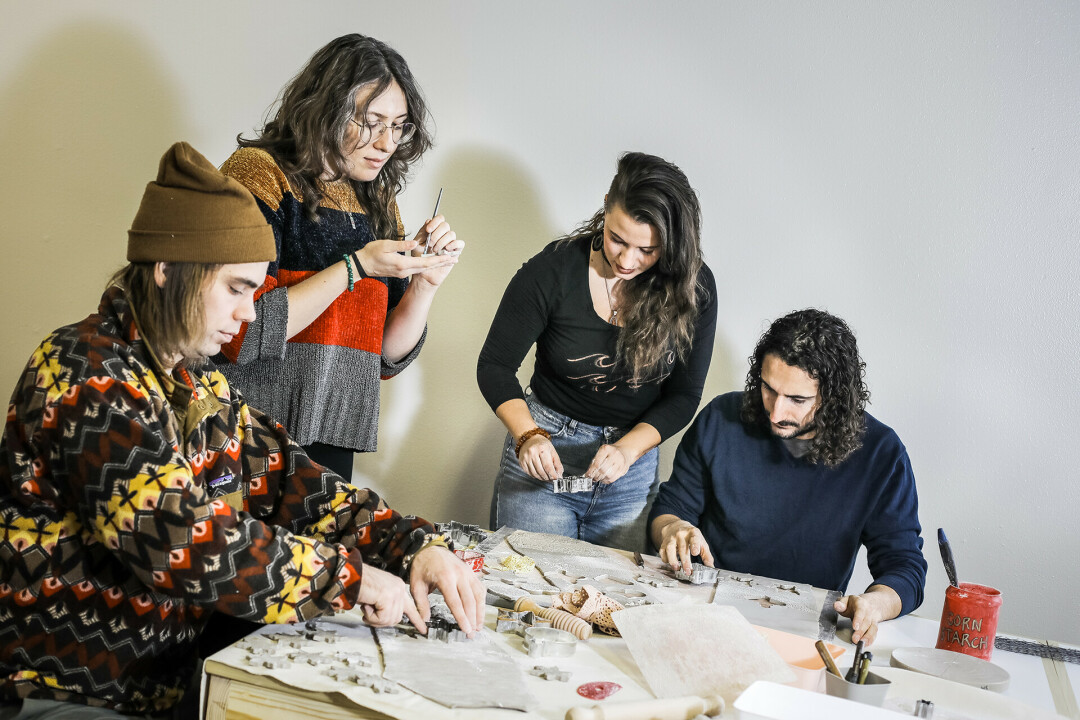 The new pottery studio offers Sip N’ Spin classes – 2.5 hour classes that include drinks, snacks, and lessons for amateur potters. “It’s super laid back,” Stuart said. “The expectation is that you are not going to make  a huge masterpiece. You’re going to make just some wobbly little ashtray, probably. But it’s really fun. Because clay can be so frustrating. I wanted something that was a little less intense and a little more fun for people.”

Half Moon Clay Center also offers one-off workshops, such as learning to make your own mug, and a six-week Intro to Pottery class, where students of all ages can learn to throw, trim, and glaze. In February, Stuart will also offer open studio memberships for experienced artists who are looking for a place to work.

“I really want to encourage grownups to feel comfortable in a space that they're not comfortable, and to challenge them to try something new.”

“Right now, it’s easy for average folks to get involved with the art community because you can go look at things, and you’ve got the public arts council,” she said. “But what I didn’t want to happen is for it to turn into this place where established artists get to come and show us their work, and the people who live here and only allowed to look at it. … Just by virtue of living here, you’re part of the artistic community.” 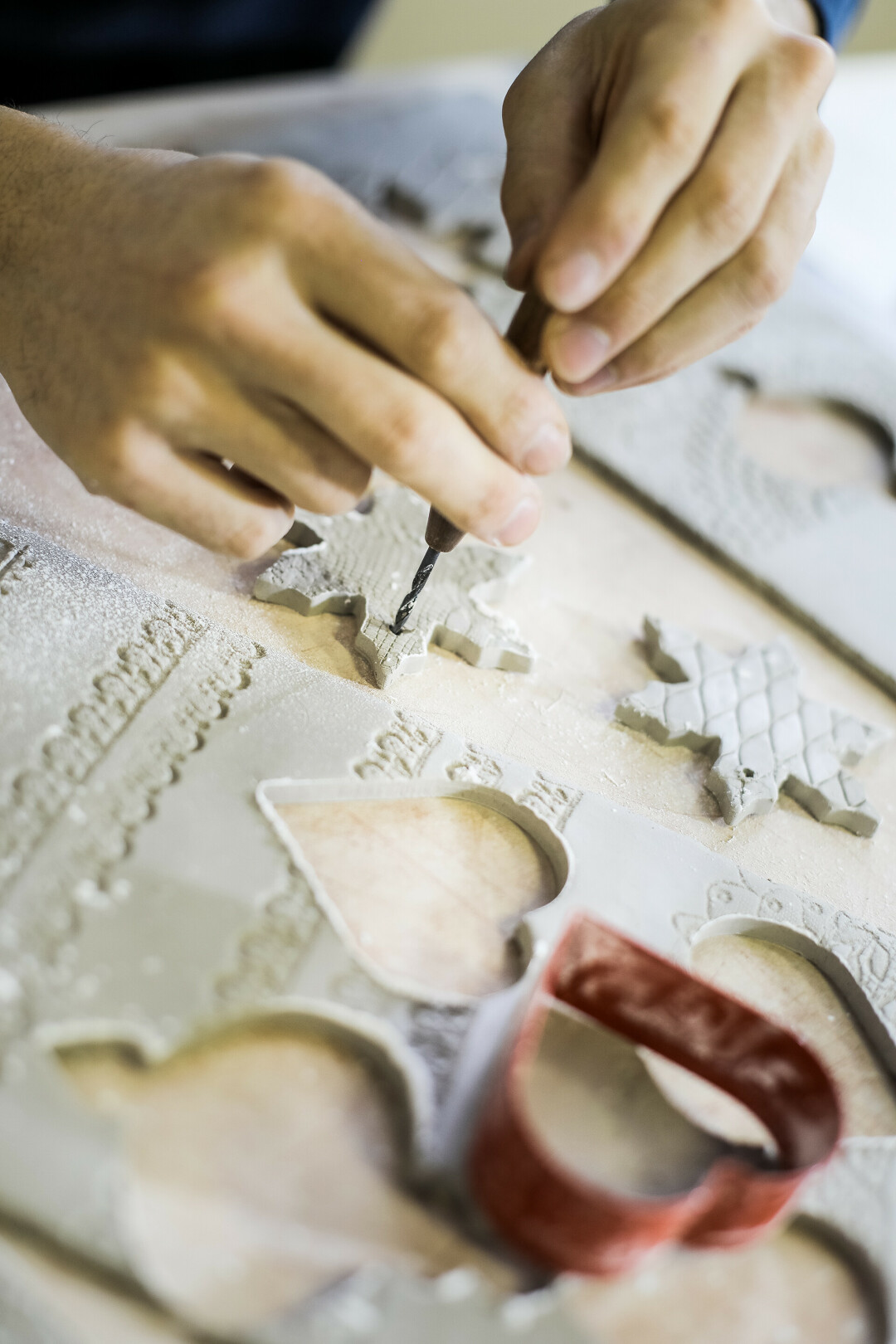 Art is integral to Stuart’s hometown of Marietta, a suburb of Atlanta, which has exploded in growth in the past few years. According to Stuart, the explosion in population has also resulted in a loss of charm and personality to her hometown. “It grew so quickly that a lot of the cool things that originally created the character of our community, it kind of got forgotten about because everybody was growing so quickly," she said. "And that kind of sucks. … If you’re in a growing community, you’ve really got to work hard to establish what the culture is of that community, because once you lose it, you can’t get it back. So you have to make it strong when it’s still small.”

And part of keeping Eau Claire’s artistic personality is ensuring that art is accessible for all artists – but especially for artists of color. She’s currently working with Power of Perception to create opportunities to encourage minority youth to pursue art.

“I wanted to try something new," Stuart said. "I feel like when you’re a young kid, you were encouraged to get involved with so many different things. Like, your parents were sending you to art camp, and sports camp, and music camp. And then when you’re a grownup, you kind of do your own thing. So I really want to encourage grownups to feel comfortable in a space that they’re not comfortable, and to challenge them to try something new.” 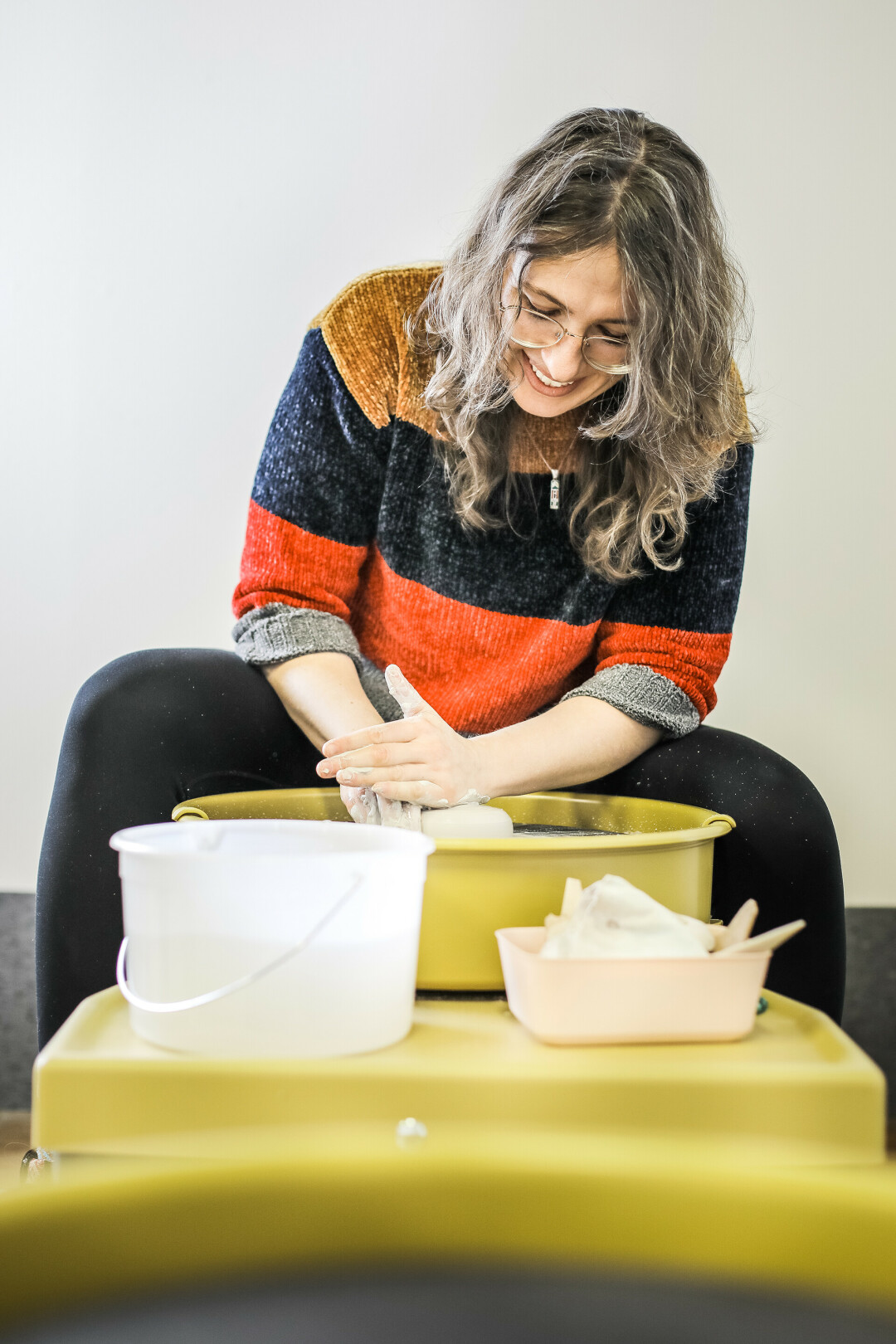 Check out more about Half Moon Clay Center at their website, halfmoonclay.com.