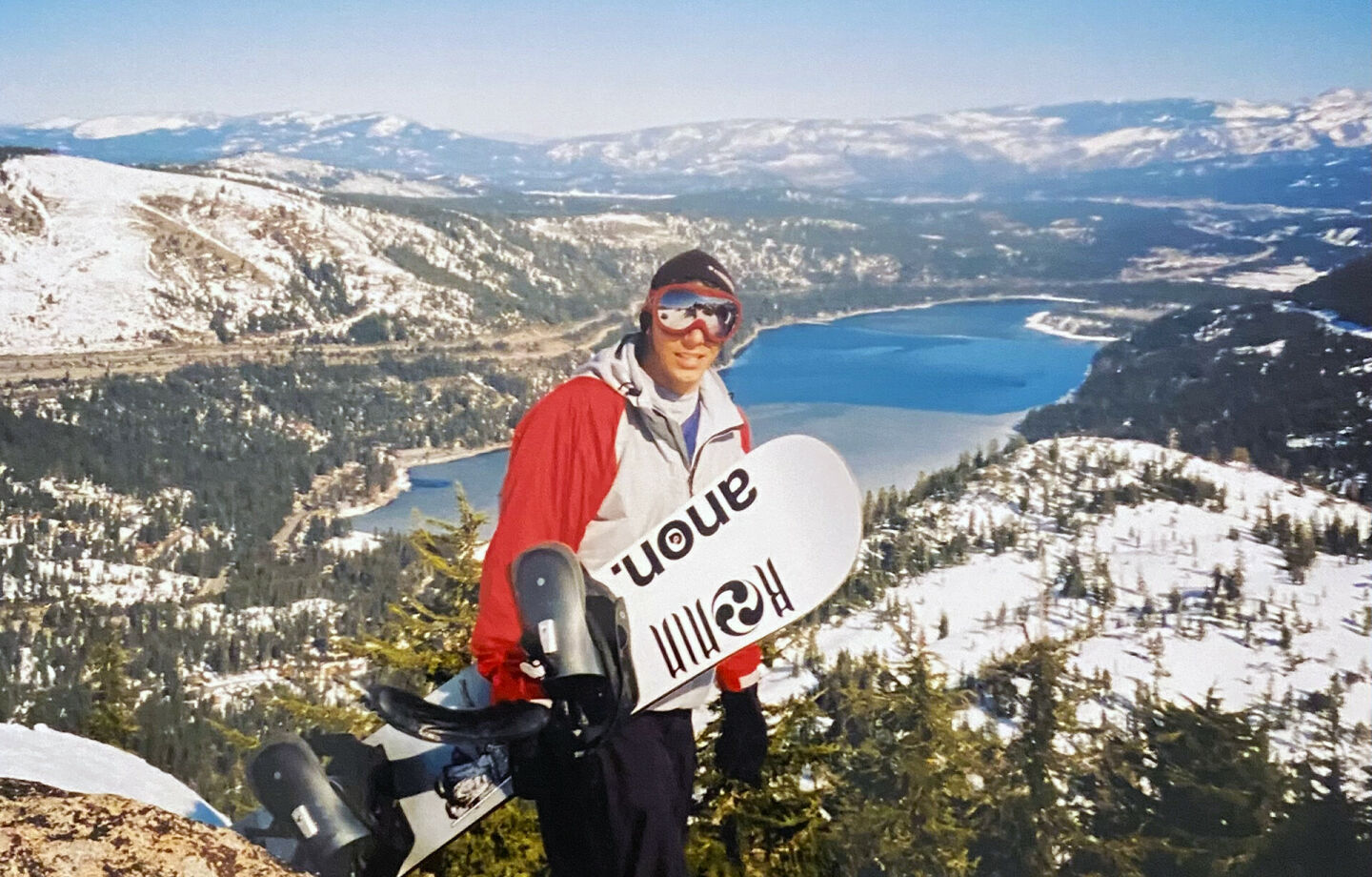 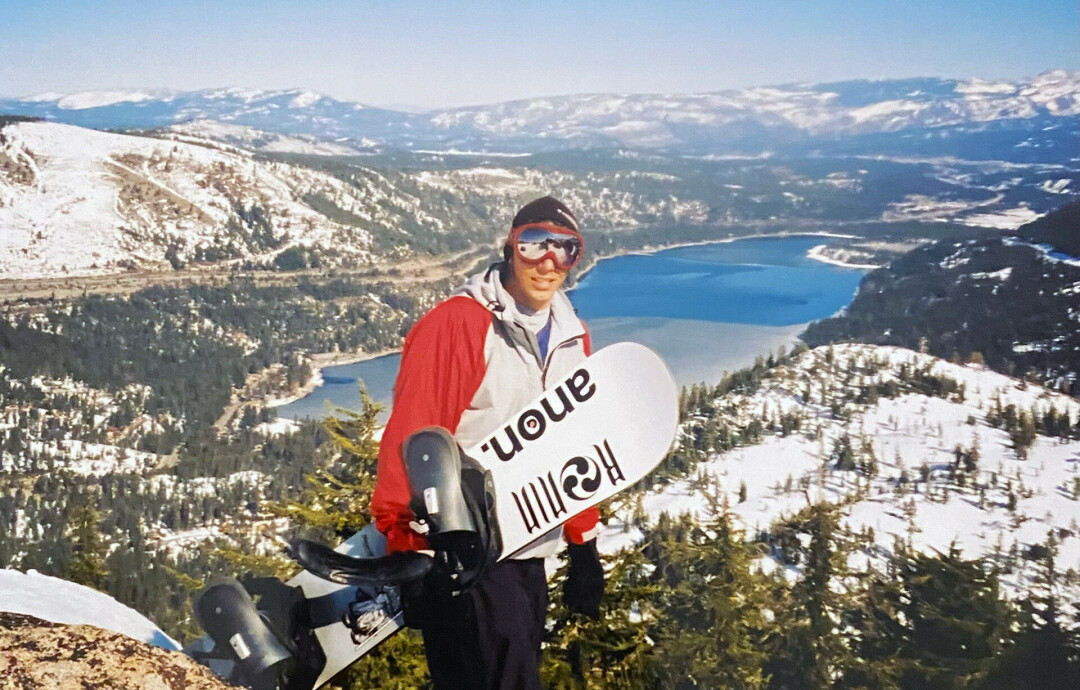 ALL ON BOARD. During his days as a professional snowboarder, Joel "Skip" Contardi frequented beautiful landscapes, such as Donner Lake in Truckee, California, weekly. (Submitted photo)

For most of us, the mere thought of looking down the side of an 8,200-foot, snow-capped mountain and preparing to soar down the slopes with nothing but a snowboard and the belief that you will stick the landing, is enough to send shivers down your spine. But for Skip Contardi, the thought is exhilarating.

Not many professional snowboarders come out of Eau Claire, but Joel “Skip” Contardi did just that. Contardi spent 14 years as a professional snowboarder from 1995-2009, competing in over 100 competitions around the world. Over the course of his career, Contardi was sponsored by Burton Snowboards, Miller Brewing Co., Anon Goggle, Oakley, and Black Flys as he competed against Olympic-level athletes from around the globe.

I'm just a guy who let a hobby get out of hand.

... I just wanted to go out and ride a snowboard with my friends.

“I’ve never cared about social status when it came to snowboarding," Contardi said. "I’m just a guy who let a hobby get out of hand. I never even cared to enter contests, but it was something I would do because I had to do it to maintain sponsorships. Companies want to sponsor championships, and I did my best to not conform to what my sponsors wanted. I just wanted to go out and ride a snowboard with my friends.” 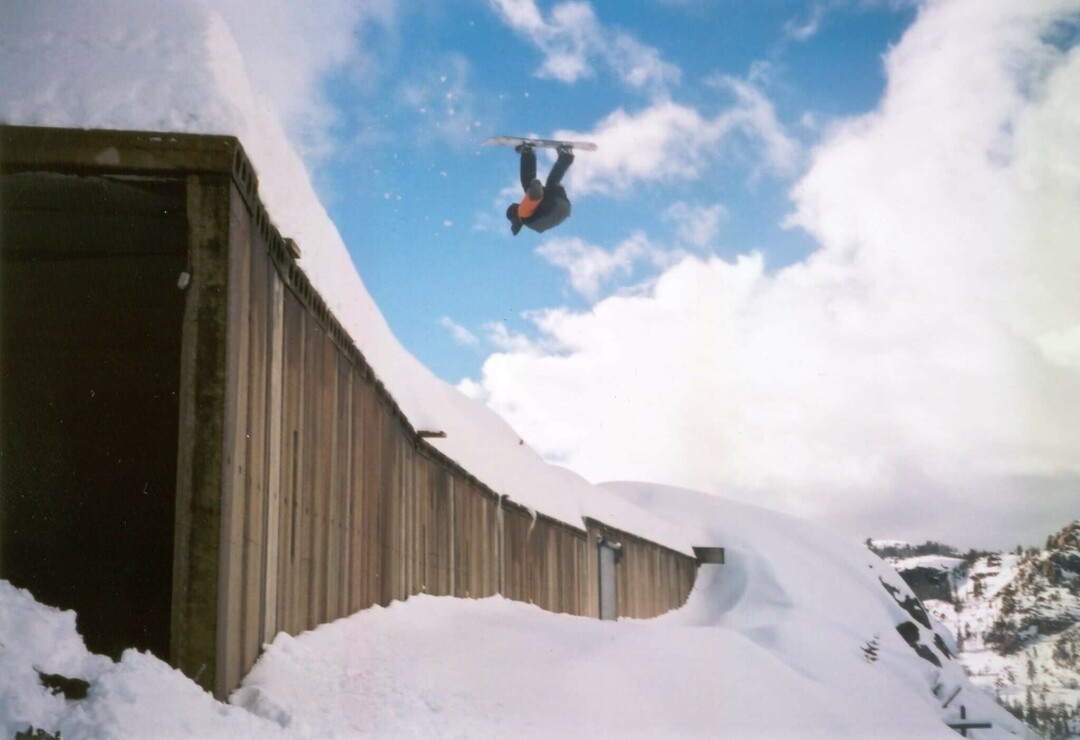 Growing up in the Eau Claire area, Contardi began snowboarding in 1989. At the time, snowboarding was in its infancy – even to the point where you couldn’t contort your body upside down during competitions because insurance companies weren’t willing to insure ’boarders who did so. But at the age of 12, Contardi and his identical twin brother, Teto – an accomplished skateboarder – made a pact that they would never give up on their dream of making action sports their career. It was a promise that would yield tremendous results for the young snowboarder.

I've never considered snowboarding to be a sport. For me, it has always been an artistic expression of how I was feeling at any given time. I was never the most talented guy. I was just someone who was never willing to give up.

After an early sponsorship with Eau Claire Bike and Sport on Water Street in the early ’90s, Contardi moved near Lake Tahoe in California to continue making a career out of snowboarding. From there, Contardi would compete in monthly competitions, conduct photoshoots, and do whatever he had to do to keep the dream alive. This included traveling back to the Chippewa Valley every summer to work construction to give himself work experience to fall back on when riding a snowboard professionally no longer was an option.

“I’ve never considered snowboarding to be a sport,” Contardi said. “For me, it has always been an artistic expression of how I was feeling at any given time. I was never the most talented guy, I was just someone who was never willing to give up.” 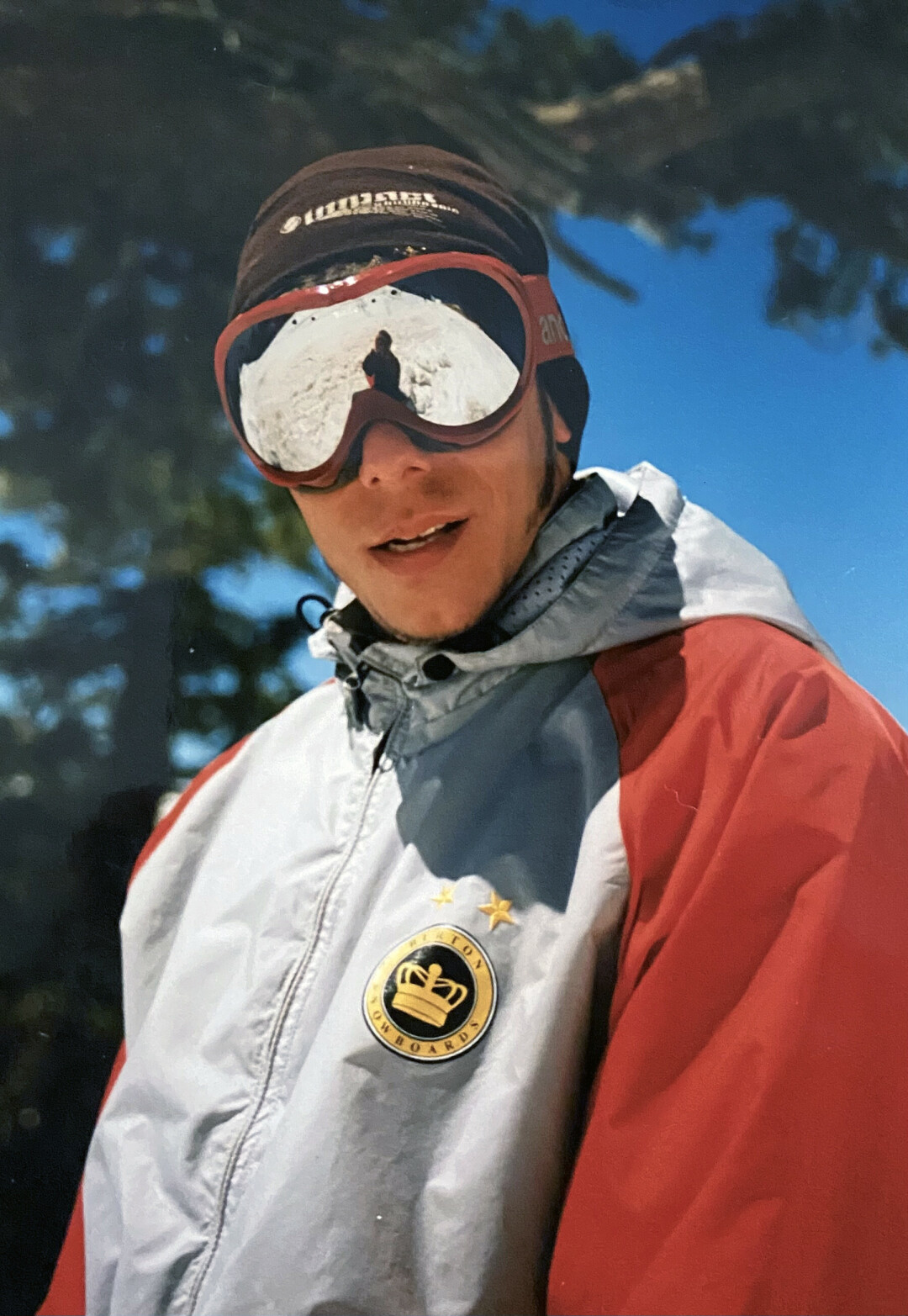 But in 2009, the career he worked so hard to build came crashing down. During the winter prior, in 2008, four of his friends died in tragic accidents – all in the action sports world – immediately putting his career into question. Misfortune continued for the young man, as his house burned down – along with all of his snowboarding memorabilia.

This mixture of trauma, tragedy, and injury were the catalysts for the end of Contardi’s professional snowboarding career.

“This sport takes more skill than a traditional sport,” Contardi said. “You’re putting your life on the line when you strap on the board. How many people do you know who play a traditional sport who have broken 17 bones? It takes a lot of courage to commit your life to it.” 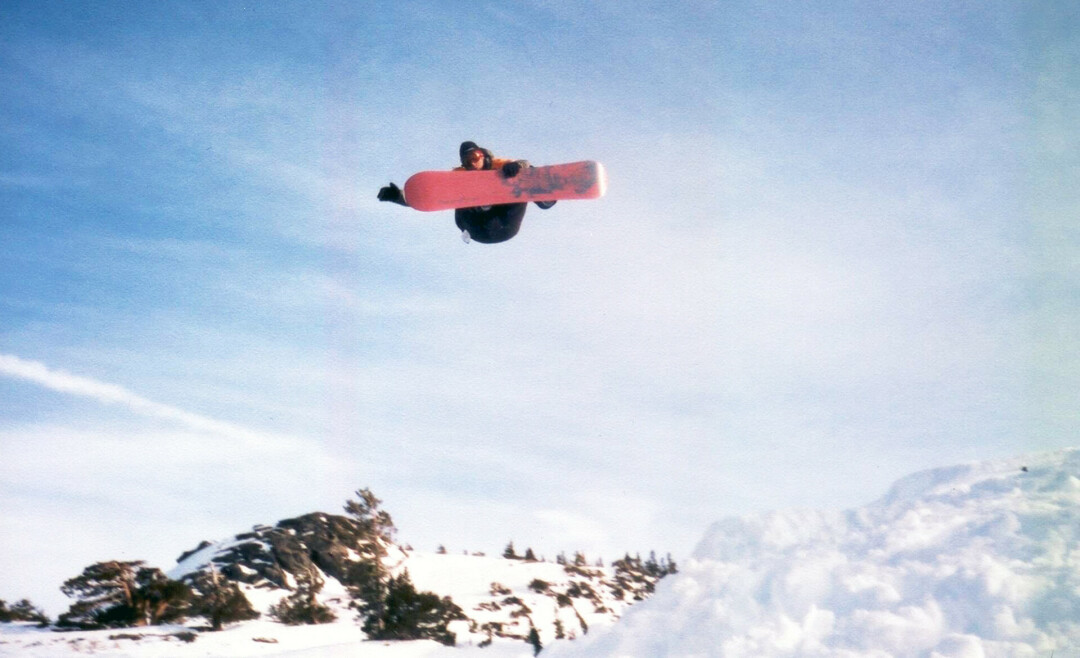 After his career snowboarding ended, the door opened for another love – a love that was perhaps even bigger than his passion for snowboarding: giving back to the next generation of snowboarders.

Contardi played an instrumental role in the development of Eau Claire’s Pinehurst Park and regularly volunteers, returning to his roots to teach kids how to snowboard. In addition to teaching, he has also been the driving force behind fundraising efforts to install a pump track and rope tow at the park through OutdoorMore Inc. A scholarship in his name is also being set up to sponsor action sports athletes in the area so that they may continue their education.

None of the accolades, or things I accomplished during my career, compare to how rewarding it is to give back and work with kids.

I try and teach kids that as long as you give something everything you've got, your dreams will come true.

“None of the accolades, or things I accomplished during my career, compare to how rewarding it is to give back and work with kids,” Contardi said. “I try and teach kids that as long as you give something everything you’ve got, your dreams will come true. Getting to coach kids at Pinehurst is more rewarding than any of the professional stuff ever was.”

A photo of Contardi will be installed in the permanent art gallery at the Pablo Center at the Confluence in Eau Claire in a few weeks, immortalizing his career in this area forever. It's a feat he calls the "snowboarding equivalent of the Hank Aaron statue at Carson Park." 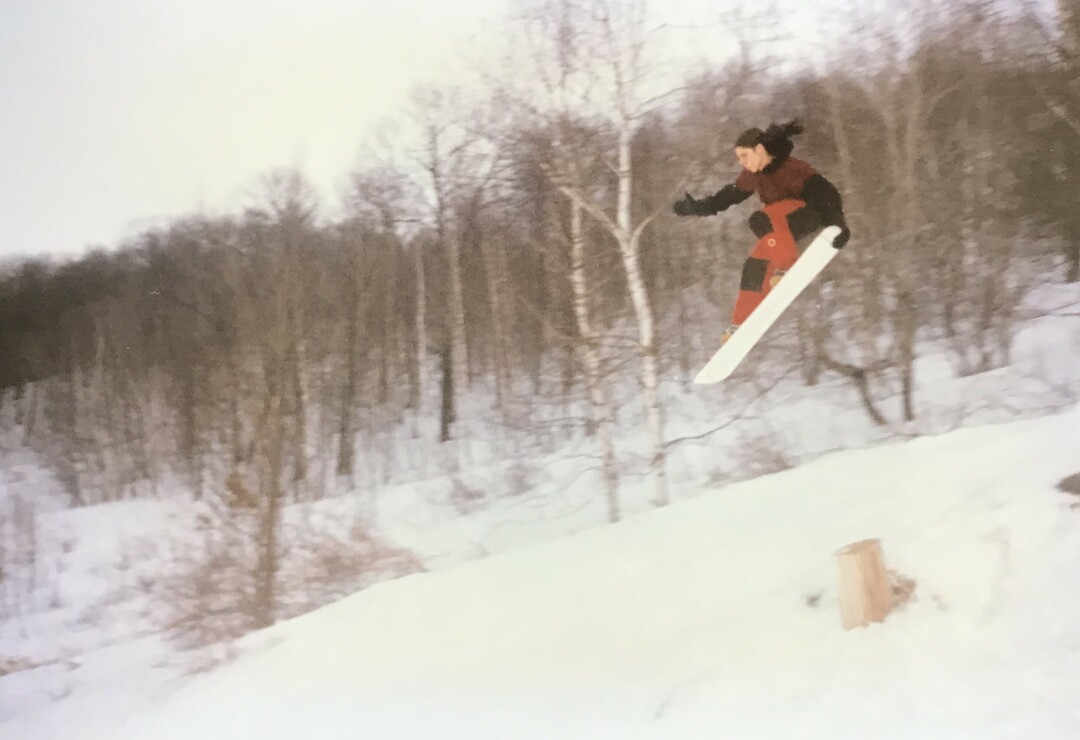 Even after Contardi more recently broke his ankle and tore his achilles tendon – and being told he'd never walk again – snowboarding has never been off the table. He is back on his feet working as a construction project manager and instructing snowboarders in his free time – something of a miracle.

But, at the end of the day, Contardi is still the same kid who loves to build jumps in the backwoods and spend all day riding them with his friends. Even after a decade of professional snowboarding and years inspiring kids to pursue their passions, he's just as fearless, careless, and free – with a snowboard strapped to his feet.