Shine Bright This Holiday Season, Like the Market & Johnson Star

the story behind those stars on construction sites 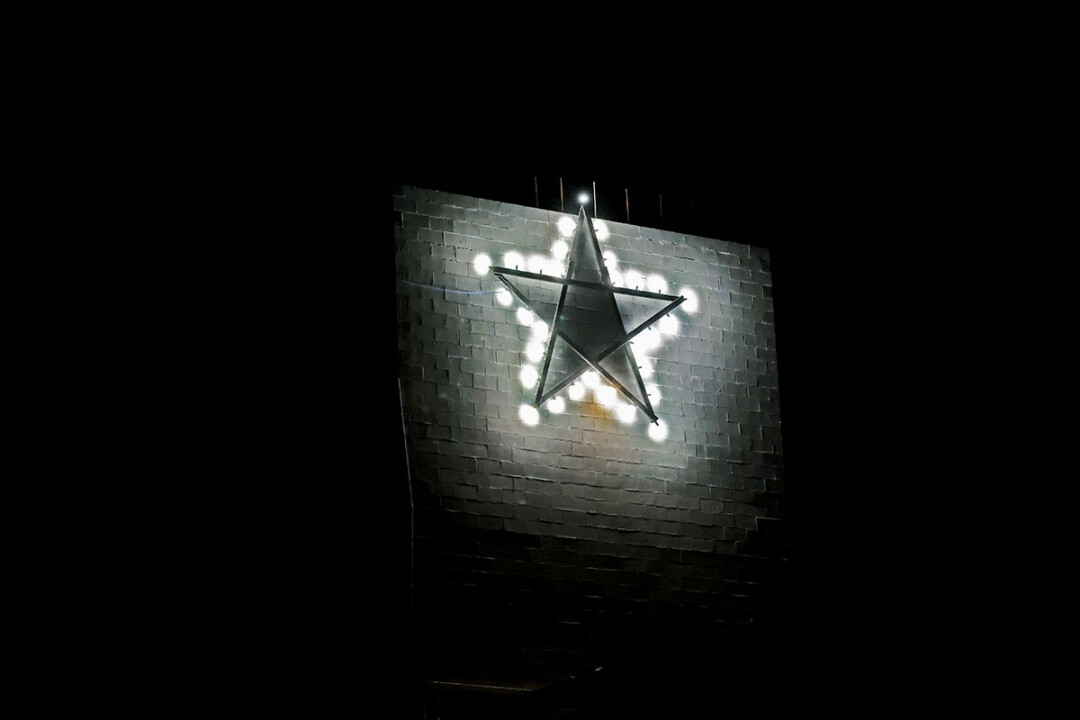 STAR LIGHT, STAR BRIGHT. A Market & Johnson star on the Andante apartment development, which is under construction in downtown Eau Claire.

It was the Friday after Thanksgiving in 1974, and – since it was Thanksgiving – our job sites were closed down so our coworkers and employees could give thanks for their blessings with their families, as we did with ours.

At the time, I was the carpenter foreman on the downtown Hilton project (now The Lismore), and I thought it would be cool to place a lighted star, hanging from our crane, directly above the center of Barstow Street, which would light up both directions of the road (Barstow Street had two-way traffic back then, too).

That day, I went to our carpenter shop and built the first of many Market & Johnson stars using five 12-foot 2x4’s painted black and wired to hold 25-watt bulbs with 40-watt bulbs on the tips. Once I finished, I called my brother Howie – then our crane operator – and asked him to meet me at the job site. Together, we hoisted the star up with the crane, lighting up the Eau Claire sky.

as we start our journey into another holiday season, my hope is that those stars mean the same thing for our community now as they did then: good tidings for a safe, healthy, and joyful new year.

It was a really neat scene; Barstow Street was bustling with Black Friday shoppers, and it began snowing large, wet snowflakes. In the days that followed, we lowered the star each morning so we could use the crane to build Eau Claire’s future piece by piece, and – at day’s end – we would lift the star into the night sky once again.

When we were constructing St. Joseph’s Hospital in Marshfield, we continued the tradition of hanging our star from the tower crane each night. After a few days, one of the Sisters of St. Francis realized that our star shined brightly over the area that would soon be the Intensive Care Unit of the hospital. They expressed gratitude for this literal beacon of hope in a space that for many signifies despair, fear, and uncertainty.

I think back to that moment now, in particular, given the past months of despair, fear, and uncertainty, and as so many people have lost their lives to COVID-19 in that same Intensive Care Unit and countless others across the country. And as we start our journey into another holiday season, my hope is that those stars mean the same thing for our community now as they did then: good tidings for a safe, healthy, and joyful new year.

Originally we only put the stars up wherever we had a crane to support them, but now we look for projects with good exposure and potential to mount the stars on the roofs or the sides of structures, becoming more visible for families around the community to find these tucked-away treasures. This year, we will light the stars on Nov. 24, and they will light up the night sky into the new year.

The Market & Johnson stars have shined on literally hundreds of projects over the years, and some of our clients continue with the star tradition long after their project reaches completion.

But I hope the stars never lose the meaning we had for them when we put the first one up in 1974. It’s a way to shine some light on the season and to bring hope for a brighter future.

Dan Market is CEO of Market & Johnson, an Eau Claire-based construction firm co-founded by his father, Juel Market, in 1948.