PICK A CARD, ANY CARD. Jordan Hagedorn is owner of For the Hobby, a new sports card shop in Eau Claire. (Submitted photo)

You could say that a new venture by industrious Eau Claire native Jordan Hagedorn, NFL player agent and marketing professional, is just a house of cards.

Hagedorn would be OK with that. In fact, that’s how he would like people to think of For the Hobby Sports Cards, the new sports card shop that he and his wife, Miki, opened recently at 1721 Birch St., formerly the location of Buroker’s Taxidermy, Bait, and Tackle.

For the Hobby is all about cards and only cards, thousands of 2½-inch by 3½ -inch laminated pieces of cardboard that — for those who follow pro football, baseball, basketball (and soon hockey) and love to collect — create a tangible and visceral connection to the athletes and games they love.

Americans of all ages have been collecting them for 150 years, starting with tobacco company cards in the 1860s, then Topps chewing gum cards beginning in 1952 and now a huge commercial market for collectors with myriad card types and eye-popping graphics.

Someone stopping by these days to pick up ice fishing waxies instead will find wax packs of cards in a bright, remodeled shop with a couch, four TVs tuned to sports channels, sports banter, and the $1 pack that could get your children into collecting or, just maybe, the holy grail card that will get your heart pumping — like the trophy fish or buck that was the lure of Buroker’s.

It’s like a sports fun zone. I want it to be a positive place and positive light for the community.

We take pride in creating a really fun and unique experience for anyone who walks through the door, and we’re going to treat people fairly.

OWNER, FOR THE HOBBY SPORTS CARDS

“It’s like a sports fun zone. I want it to be a positive place and positive light for the community,” Hagedorn said. “We take pride in creating a really fun and unique experience for anyone who walks through the door, and we’re going to treat people fairly.”

The shop buys, sells and trades cards, from packs to unopened boxes to special cards sheathed and under glass. Feeling lucky? Try the $3 and $10 shake-for-a-card boards.

For the Hobby has roots in Hagedorn’s long-time love of collecting, dating to his days as a kid at nearby Longfellow Elementary School who bought cards with his lawn mowing money. He got serious about collecting around 2013 while working in New York and attending card shows. He’s built his personal collection to more than one million cards.

After relocating to Eau Claire, he tested the waters with pop-up shops and discovered a strong local collecting community. That knowledge, combined with a pandemic surge in card collecting and knowing there’s no other true card shop within 90 miles, gave him and Miki the confidence to open the shop. 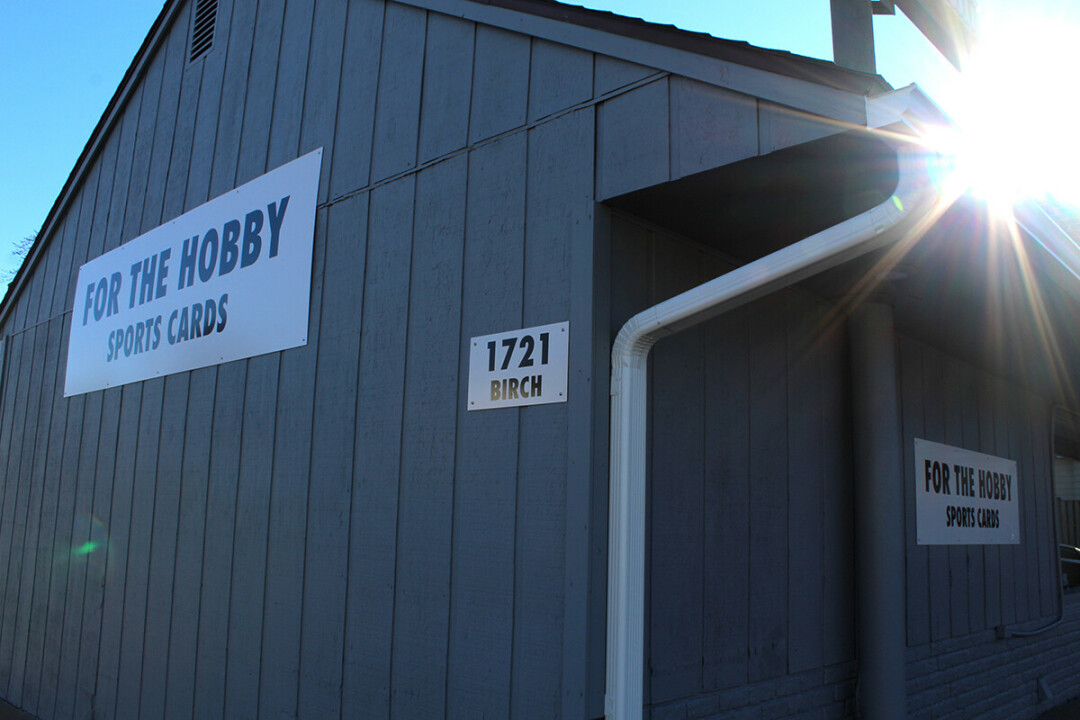 For the Hobby Sports Cards is at 1721 Birch St., formerly the location of Buroker’s Taxidermy, Bait, and Tackle.

With 30 years of collecting acumen, numerous connections in the industry and his own For the Hobby collecting podcast (episode 8 features icon James Beckett), one of Hagedorn’s goals is to help educate customers about collecting and market trends — and most importantly have fun.

On a recent night, several buyers talked sports and cards, and soon there was a buzz as they gathered around a collector who came through the door hoping to get an idea of how much his rare Andy Pafko 1952 baseball card was worth. At least five figures, Hagedorn told him.

“If you love sports, you should explore sports cards. The same fun you get in watching a favorite player hit a game-winning shot is the same thrill you get when you pull a great card,” Hagedorn said.

“We want to inspire people and create an environment where people can connect around sports,” he continued. “The camaraderie and connection are my favorite part of the hobby. Eau Claire is a great sports town. It has a rich history. It’s our chance to bring the awesome collectors in Eau Claire and the area together.” 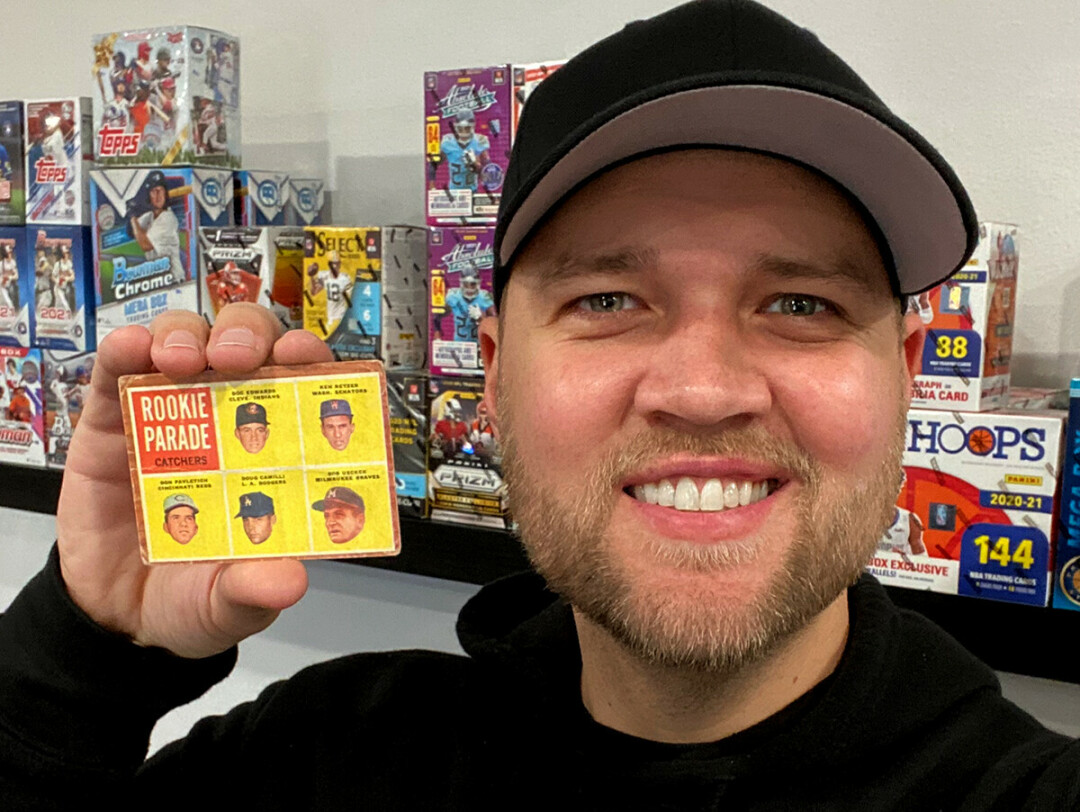 Hagedorn seems to have played his cards right throughout his life.

While at Eau Claire North High School, he began restoring used Air Jordan and Nike sneakers and selling them for a nifty profit on a new online marketplace, eBay. “I had an ecosystem of sneakers. Now I’m creating an ecosystem of sports cards,” he said.

He left UW-Eau Claire early and began his career, eventually working for the Eastbay shoe company of Wausau in marketing from 2008-12, then as director of marketing and partnerships for the international Sneaker News blog in New York from 2013-18. He continues to work with Sneaker News, his main job, but virtually.

While in New York, Hagedorn became a certified NFL agent. His first client was Harrison Butker, a rookie place-kicker. Butker and the Chiefs won the 2020 Super Bowl, with Jordan and Miki watching in person. Hagedorn also represents the punters for the Saints and Steelers and continues to pursue NFL clients. 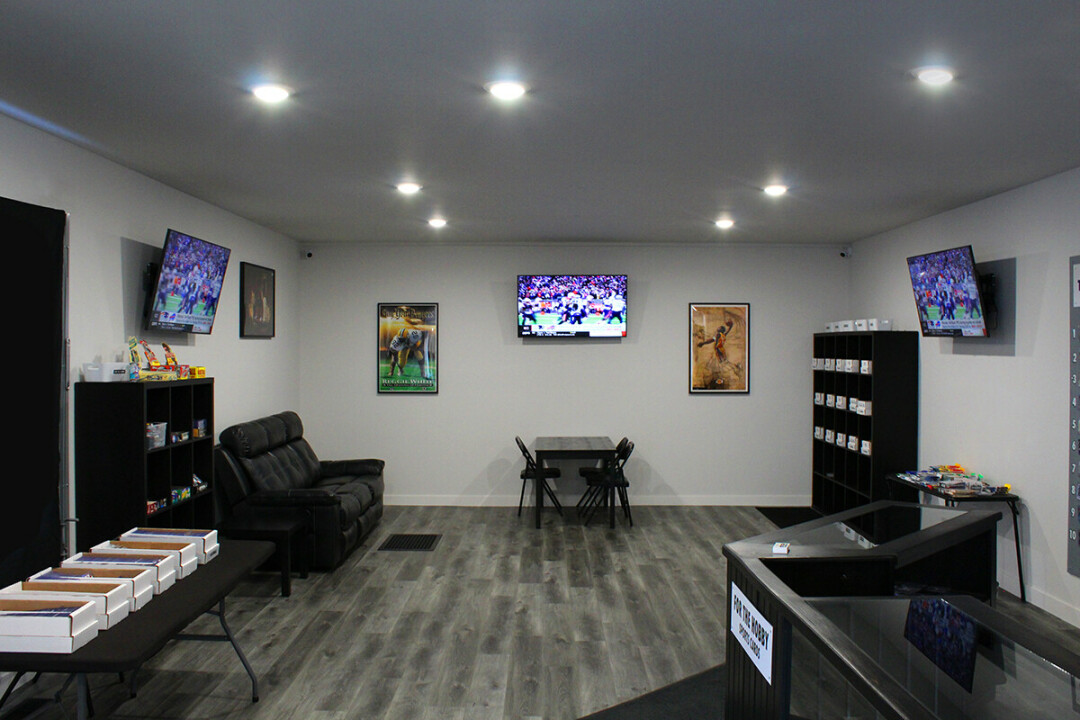 The interior of For the Hobby.

He’s loving his latest role as a shop owner and runs his Eau Claire marketing agency, Eau Claire Social, out of the For the Hobby shop. “I’m just a big kid and lucky to pursue what I love to do,” he said. “It starts with a love of sports and people and expands to a love of cards.”

Hagedorn plans to hold special events for collectors and start a collecting club in his new space.

For the Hobby Sports Cards is open daily from noon to 7pm though December, except for Christmas Eve and Christmas Day. For more information check out Hagedorn’s website forthehobby.com or email him at jordan@forthehobby.com.