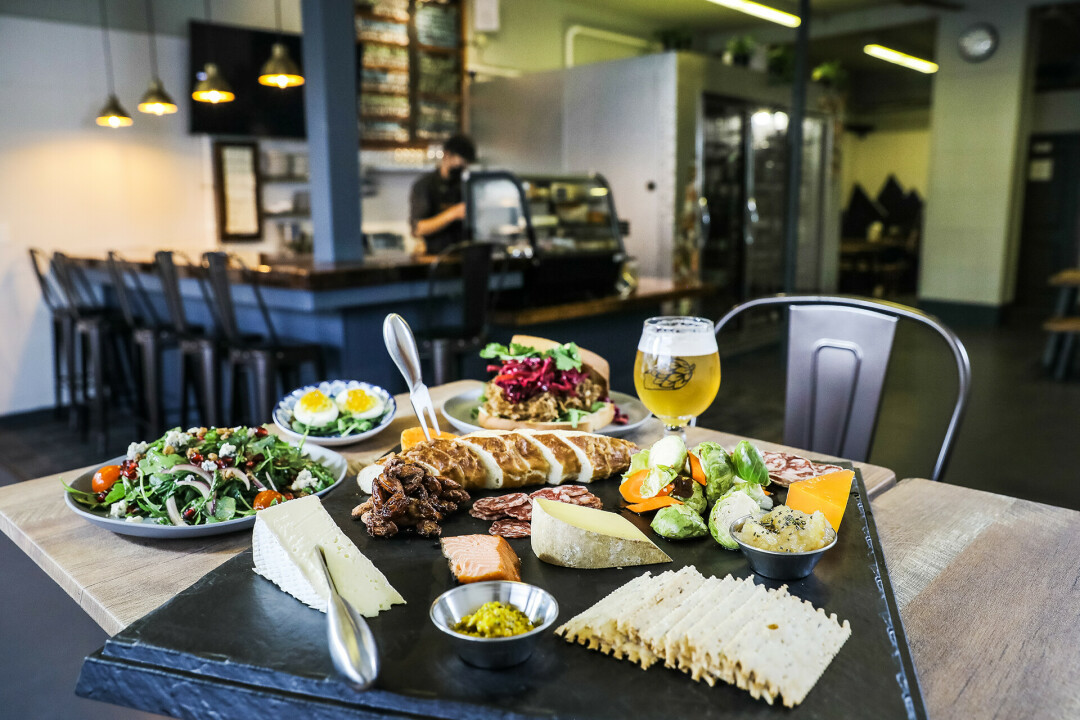 “One good pairing was all it took to open their eyes to possibilities they might never have imagined,” wrote cheesemonger Steve Jones in his book Cheese, Beer, Wine, Cider: A Field Guide to 75 Perfect Pairings.

I really hope to see this as a place where craft beer and community meet.

Co-owner of 3rd and Vine

Owners Jared Bilhorn and Megan Knoll met in Eau Claire 15 years ago, then bounced across the U.S. in various restaurant roles – first to Knoxville Tennessee, then onward to Portland, Oregon, where Bilhorn managed several Pok Pok restaurants – an authentic Thai restaurant chain that spanned across the country (including a location in New York City!).

As the COVID-19 pandemic spread throughout Portland, causing all of the Pok Pok locations to close, and wildfires inched toward their family home, Bilhorn and Knoll decided it was time to move back to Wisconsin along with their almost four-year-old son Iver (pronounced Eye-ver, totally unlike the name of Justin Vernon’s band). 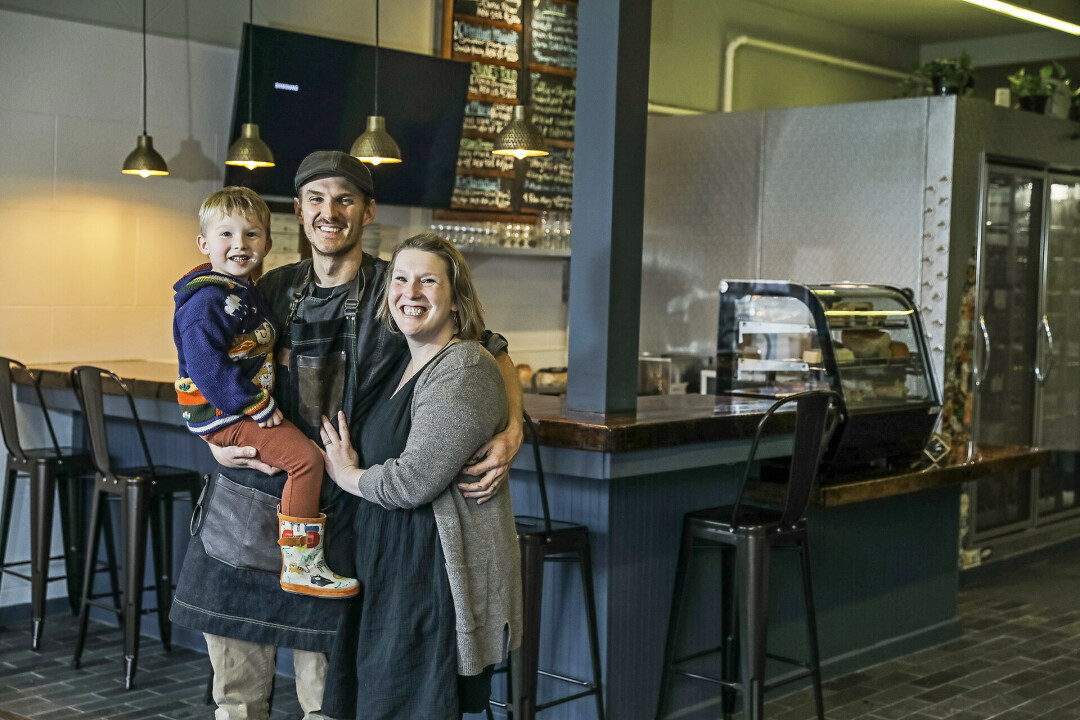 RAWRSOME NEW PLACE. Jared Bilhorn (left center) and Megan Knoll  (right) are the new owners of 3rd & Vine in Eau Claire, along with their four-year-old son Iver (left), who isn't quite old enough to enjoy beer at his parents' new shop, but he's totally cool with that. This local kiddo has a passion for dinosaurs, and he's not afraid to share it. (Be sure to ask about his favorite, ginormous dinosaur toys if you see him at the shop!)

“I’d had an itch to come back for a while,” said Knoll, who attended CVTC.

“We had been watching Eau Claire (go) through this transformation since we had gone away,” said Bilhorn, former general manager of The Stones Throw, “and it was something we wanted to be a part of.” 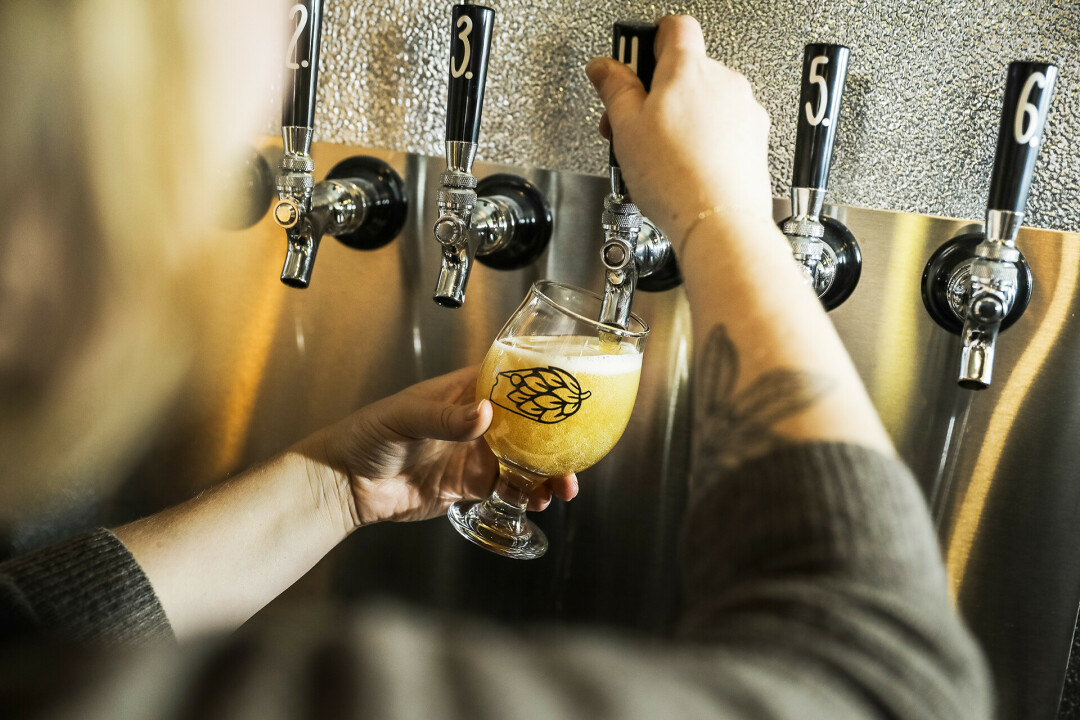 DON'T WORRY, BE HOPPY. The shop offers six beers on tap, including the Russian Imperial Stout from Lazy Monk Brewing and Exclamation! from Modicum Brewing Co., as well as beers from Portland (such as Pear Mary from Cascade Brewing; Fortune's Told, Paradiso, and Sub Harmonic from Great Notion Brewing), as well as regional beers, such as the Pony Pilsner from Half Acre in Chicago and Operation: Magical from Drekker Brewing Co. of Fargo, North Dakota. Pictured here is the Pear Mary from Cascade Brewing.

The historic location at 1929 3rd St. on the city’s west side (at the intersection of 3rd and Vine streets – so maybe you can guess the inspiration for the name!) was built in 1896 and has antique features, including a lower bar counter constructed from 104-year-old subflooring from the couple’s home. 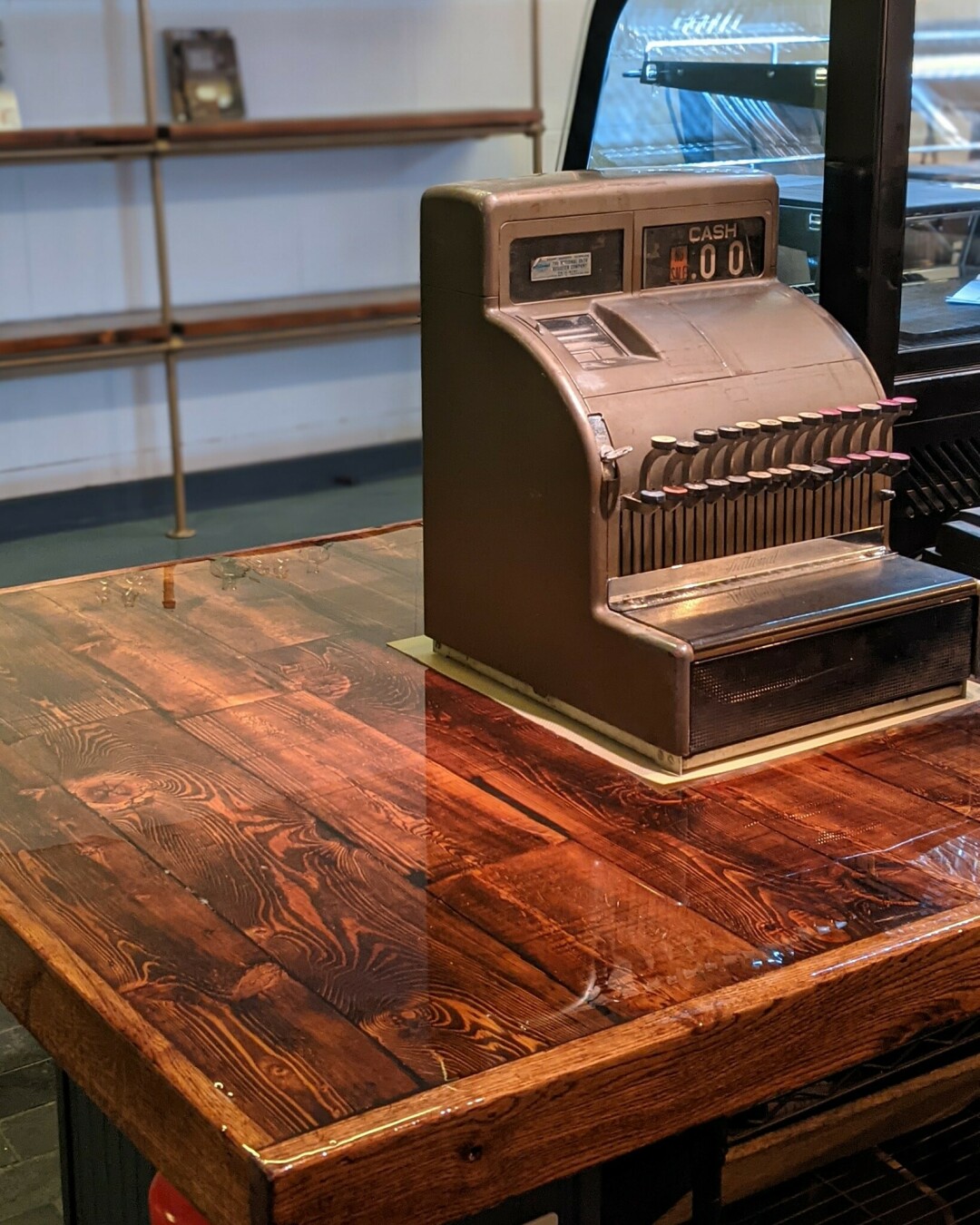 HARNESSING HISTORY. As Bilhorn and Knoll renovated their new Eau Claire home, they had to tear up 104-year-old subflooring in order to do some electrical work. Instead of tossing the beautiful and historic wood, they decided to incorporate it into their new shop, using the refinished wood as their lower bar counter. (Photo via Facebook)

The old building was in desperate need of an upgrade, the couple said. “You had to have a vision,” Knoll said. Since they began leasing the space in late spring, they have torn down walls, reconstructed areas of the business, built two new bathrooms, constructed a new bar counter, created a centralized walk-in cooler, and finalized their business with homey touches – just in time for their Friday, Nov. 19, grand opening. 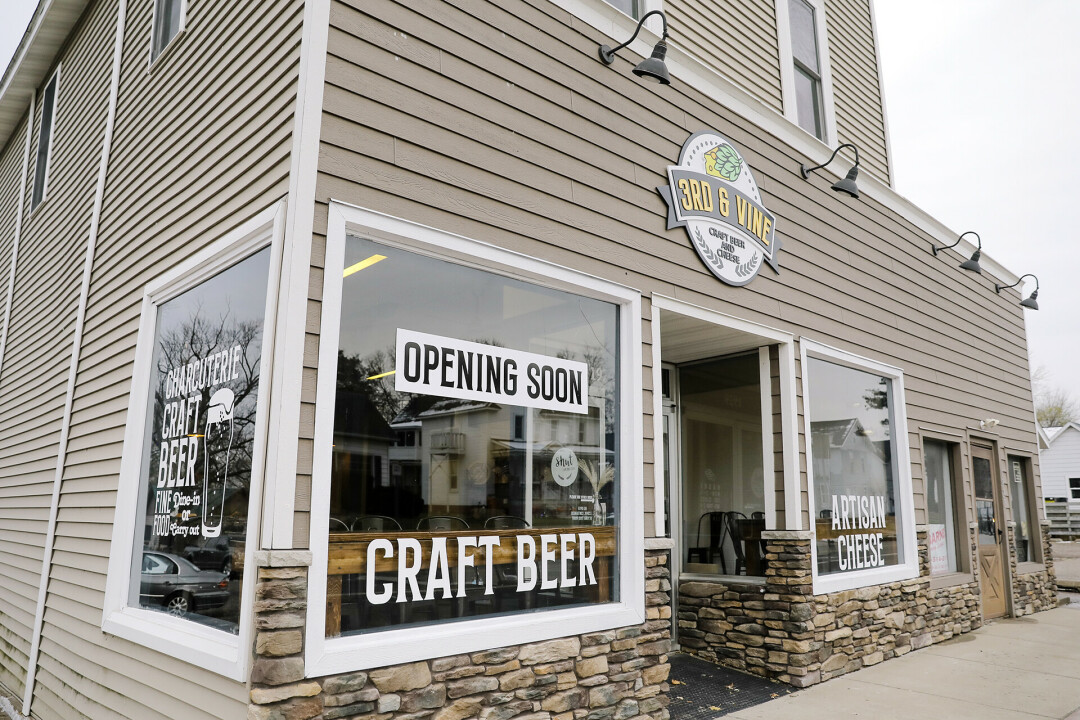 NOTHING CHEDDAR THAN THIS. Check out 3rd and Vine, a new craft beer and artisan cheese shop located at 1929 3rd St. in Eau Claire.

“We’re excited to be on this side of town,” Knoll said. “We’re close enough to Brewing Projekt and Lazy Monk that we really feel like it’s a nice area.”

Besides their beer offerings, they are tapping into an increasingly popular menu item across Eau Claire: charcuterie boards, offering classic board, deluxe board, and cheese board option that include a combination of local cheeses and meats (including Red Table Meats Extra Vecchio Salami, Northern Waters Smokehaus Smoked Salmon, and Underground Meats' Finocchiona) as well as pickles, compote, mustard, crackers, and bread. 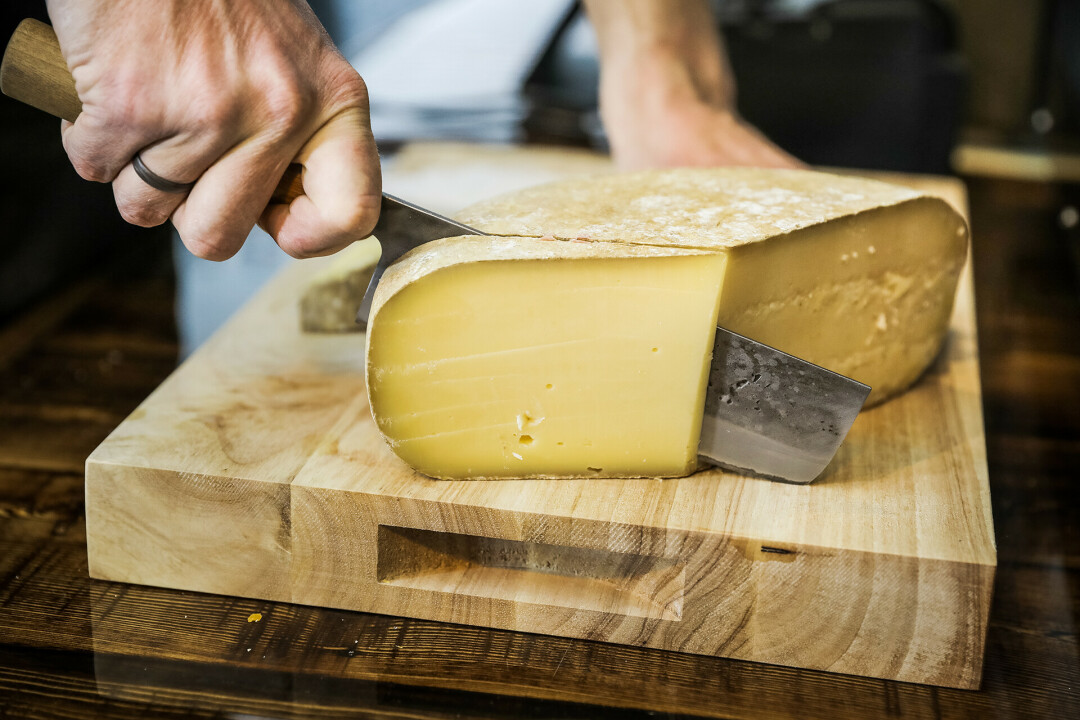 3rd & Vine also sells their ingredients separately for those looking to create their own charcuterie spreads from home. With a new park in the works right next door as part of the Cannery District development, their shop is the perfect place to stop for snacks on the way to a family (or romantic!) picnic in the park, Bilhorn said.

With all this talk of beer and cheese, we almost forgot to mention their salads, which include arugula, carrot tops, cherry tomatoes, red onion, candied walnuts, and pomegranate seeds, complete with Sartori Dolcina Gorgonzola (which pairs well with fruit and honey) and a pomegranate or mustard vinaigrette. They also offer unique snacks: olives, cracklins (a.k.a. gratons), pickles, and deviled eggs. 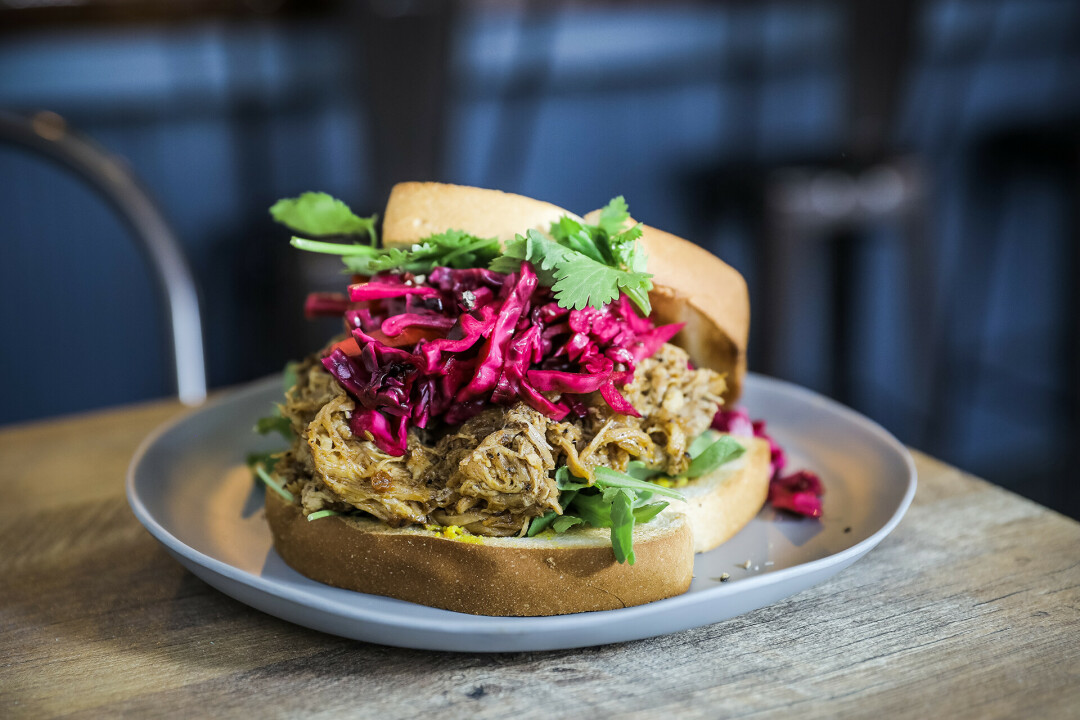 GREAT FOOD, NO MATTER HOW YOU SLICE IT. This colorful sandwich is a coffee- and Chipotle-rubbed pork with pickled cabbage slaw, arugula, cilantro, and hot mustard served on Texas toast.

Their simplistic, homey atmosphere is perfect for families, with a chalk board in the back of their shop specifically for children with a creative eye to draw. “I just want it to be a shop where people can come and enjoy some good food and good beers while meeting friends,” Knoll said, adding that they don’t have a traditional “bar” feel in order to encourage families with younger children to feel comfortable in the shop.

If you’re looking to have a cozy night at home this winter, they offer single and four packs of bottled or canned beers, including Guava Goose from Collective Arts Brewing (Ontario, Canada), Fifteen from Surly Brewing Co. (Minneapolis), Humans With Animal Lips from Oliphant Brewing (Somerset, Wisconsin), and Northwest Flanders of Cascade Brewing (Portland, Oregon). They are currently in discussions with Working Draft Beer Company based in Madison to hopefully become the first Chippewa Valley beer retailer to offer that brewery’s beer. 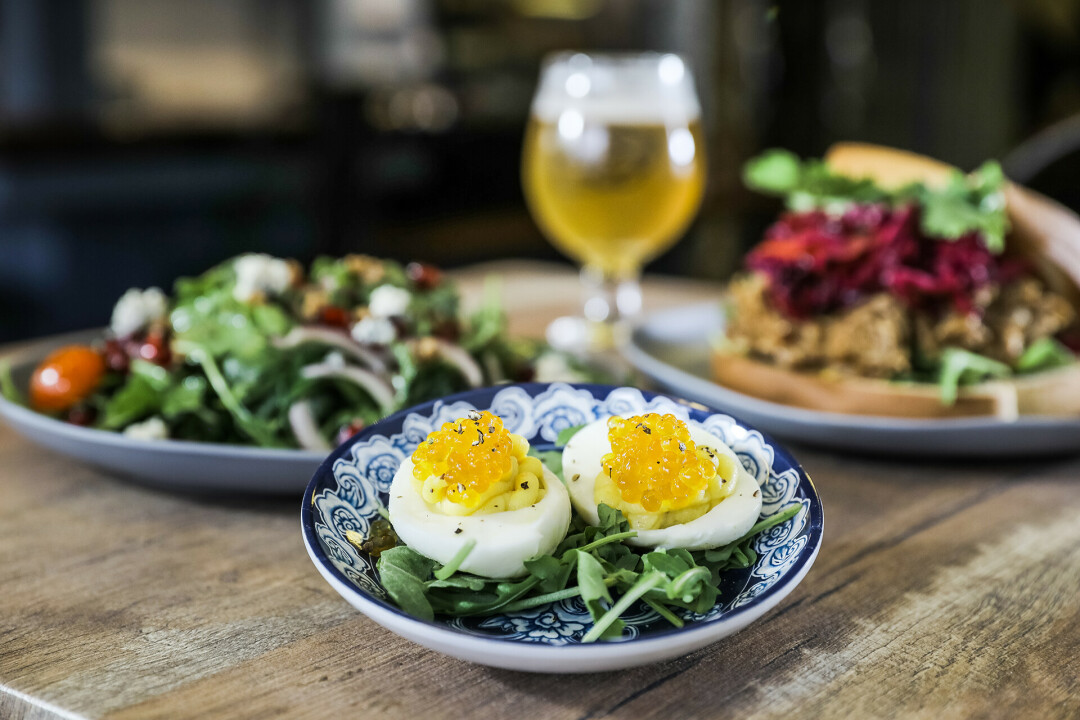 WHAT THE DEVIL? 3rd & Vine's deviled eggs are served with Roe – pictured here is their Smoked Wild Char Roe  – coupled with Half Acre Pony Pilsner from Chicago.

In addition to serving savory snacks, they also want to contribute to the thriving Chippewa Valley art scene, and invite local artists to display their artwork on shop walls for 60-day increments – offering community artists new opportunities for exposure. They also hope to host fundraisers for local organizations and nonprofits to give back to the community.

“I really hope to see this as a place where craft beer and community meet,” Knoll said.

For more information on 3rd and Vine, check out their website at 3rdandvine.com, Facebook at facebook.com/3rdandvine, and Instagram at @3rdandvineec. Their hours are Monday, Wednesday, and Thursday from 2-9pm, Friday and Saturday from 2-10pm, and Sunday 11am-9pm.