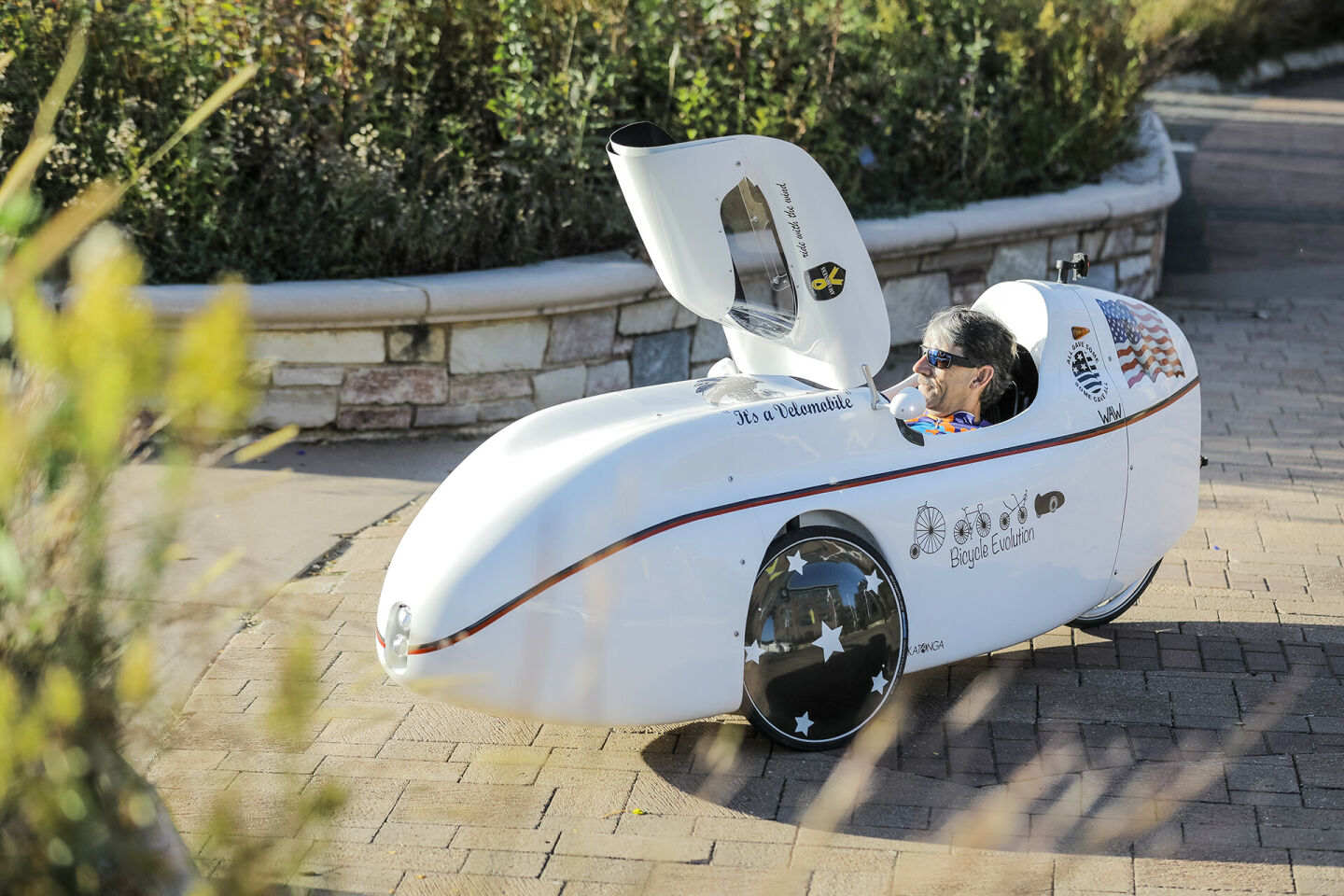 This Unique Tricycle, Dubbed the ‘Velomobile,’ Strangely Resembles a Rocket Ship. Here’s the Story Behind It.

no, this isn’t actually a rocket ship, but it is a fascinating adaptation of rocket technology to the cycling industry. 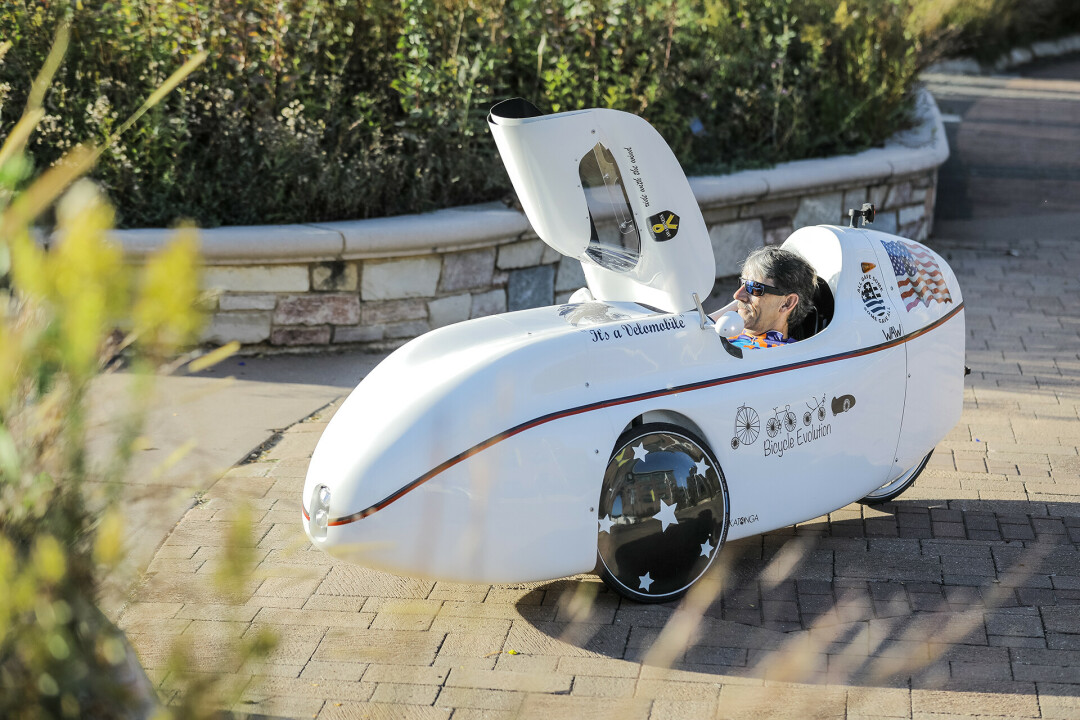 ONE GIANT LEAP FOR MANKIND. Only 600 unique tricycles similar to Eau Claire’s Paul Cary have ever been made in the U.S.

Paul Cary is used to drawing stares, receiving shouted questions, and cars pulling over to hail him as he soars through the streets of Eau Claire.

And though Cary might like to think it’s because of his mustachioed, salt-and-pepper good looks, it’s most likely because of his Velomobile, a gleaming white trike that more closely resembles a Bonneville land speed contender than a conventional bicycle.

There were so many days I wanted to go out riding, and the weather would be rainy.

I thought: those are really neat! You can be completely tucked in. I almost look forward to rain now.

owner of the local velomobile

A passionate cyclist for the past 10 years, Cary first discovered the Velomobile on the internet seven years ago. As a former Air Force plane mechanic, he found the aerodynamic shape and cutting-edge technology fascinating. Not to mention, the enclosed interior appealed to Cary when it came to a cyclist’s toughest challenge: poor weather. 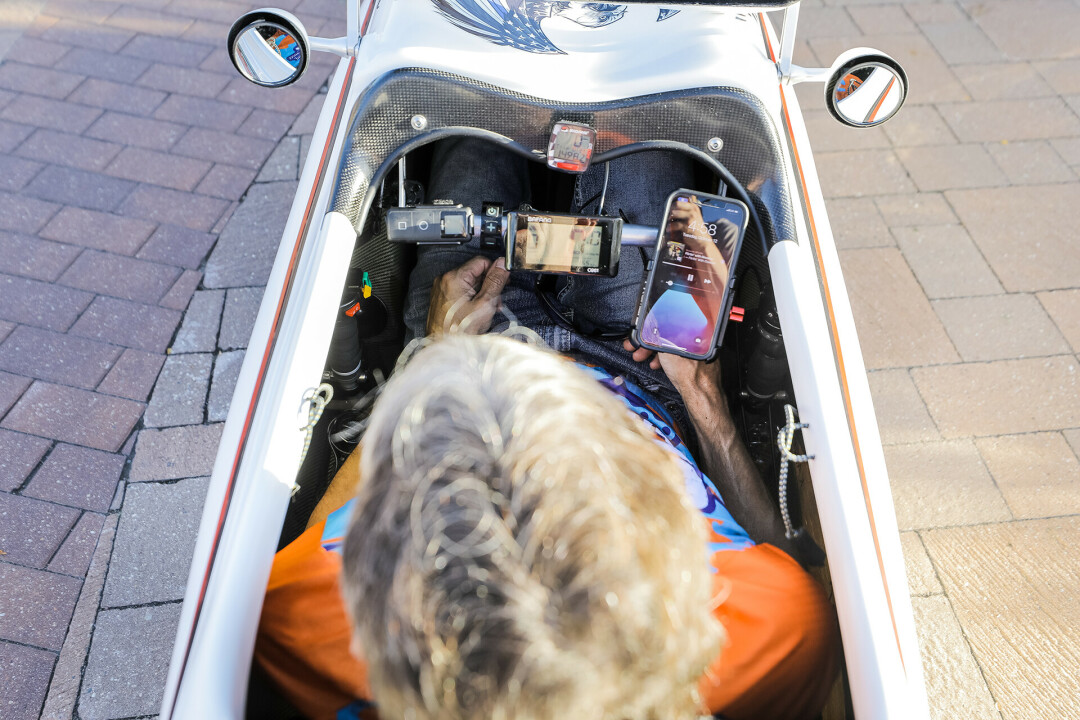 “There were so many days I wanted to go out riding and the weather would be rainy,” he said. “I thought: those are really neat! You can be completely tucked in. I almost look forward to rain now.”

With only one dealer in the U.S., and manufacture limited to just a few European fabricators (his was made in the Czech Republic), Cary purchased his Katanga Waw Velomobile over the web from Bicycle Evolution in Plano, Texas. Orders for Velomobiles take a minimum of two years to fill (probably longer now due to supply chain problems as a result of COVID-19), but Cary found a showroom model that had all the options he wanted.

Only about 600 Velomobiles like Cary’s have ever been produced, with only three on the roads in Wisconsin. But, there are likely a few thousand similar makes and models all over the world.

His Velomobile features a pedal-assist motor and batteries, air-ride suspension, and a foul-weather bubble, and is constructed primarily of hand-formed, ultra-light carbon fiber.

“One of the biggest drawbacks is price, of course,” Cary admitted. He shared that when he first told his wife about the Velomobile, her response was, “Fourteen thousand dollars for a bike?” 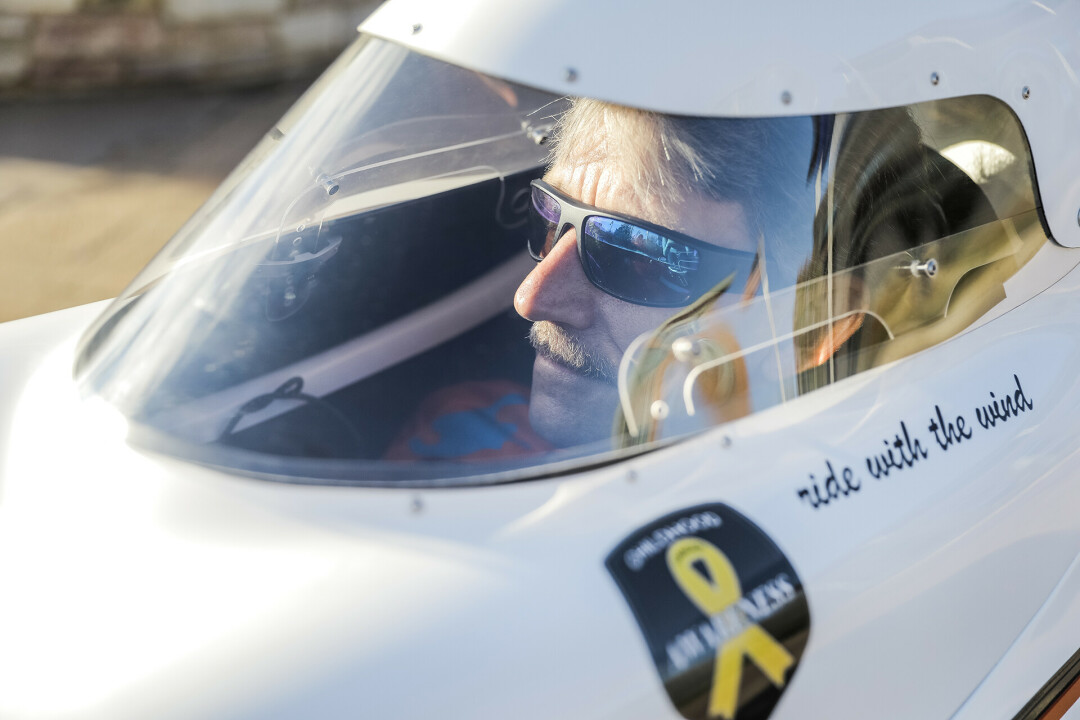 Now near the end of fall with his Velomobile, Paul has traveled over 3,000 miles – 1,000 of those earning pledges to the Childhood Cancer Awareness Fund. The range of a Velomobile using Category 1 constant pedal assist is around 50 miles; however, Cary often turns the assist motor off and can stretch his trips to 100 miles. Most of those miles are limited to the road.

“Typically, I do not like to ride on the trails,” Cary said. “Since COVID (first hit the area), the trails are often so crowded, and people aren’t paying attention. You have to slow down to walking speed.”

The trike can easily cruise around 20 miles an hour – and going downhill, Cary said he’s reached speeds of 40 or 50 miles per hour.

When it comes to safety, though Cary said his trike has almost all the creature comforts of a vehicle, he stays in the bike lanes and does not challenge car traffic. “Cars seem to give me more room,” he said, “possibly because of the visibility (the stark white Velomobile carries an array of LED lighting). They’re low to the ground. But, because of their uniqueness, they tend to pique drivers’ interest, and they have their anchors out.”

In fact, Cary said he can’t go anywhere without drawing attention, so don’t feel reluctant to give him a wave.

“I’ve had so many conversations with folks, the high fives,” he said. “It’s a privilege to go down the road with even the mailman waving. People are like, ‘What is that?’ ” 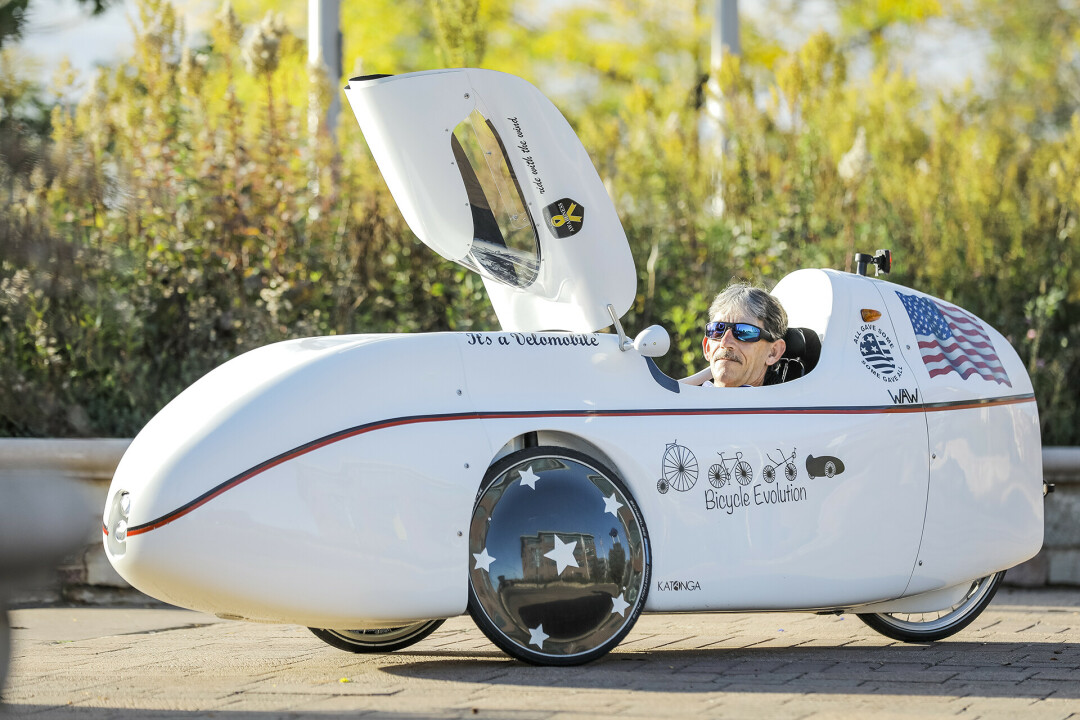