newest issue includes more young writers than ever before, will celebrate its debut on Nov. 17 at Lazy Monk Brewing in Eau Claire 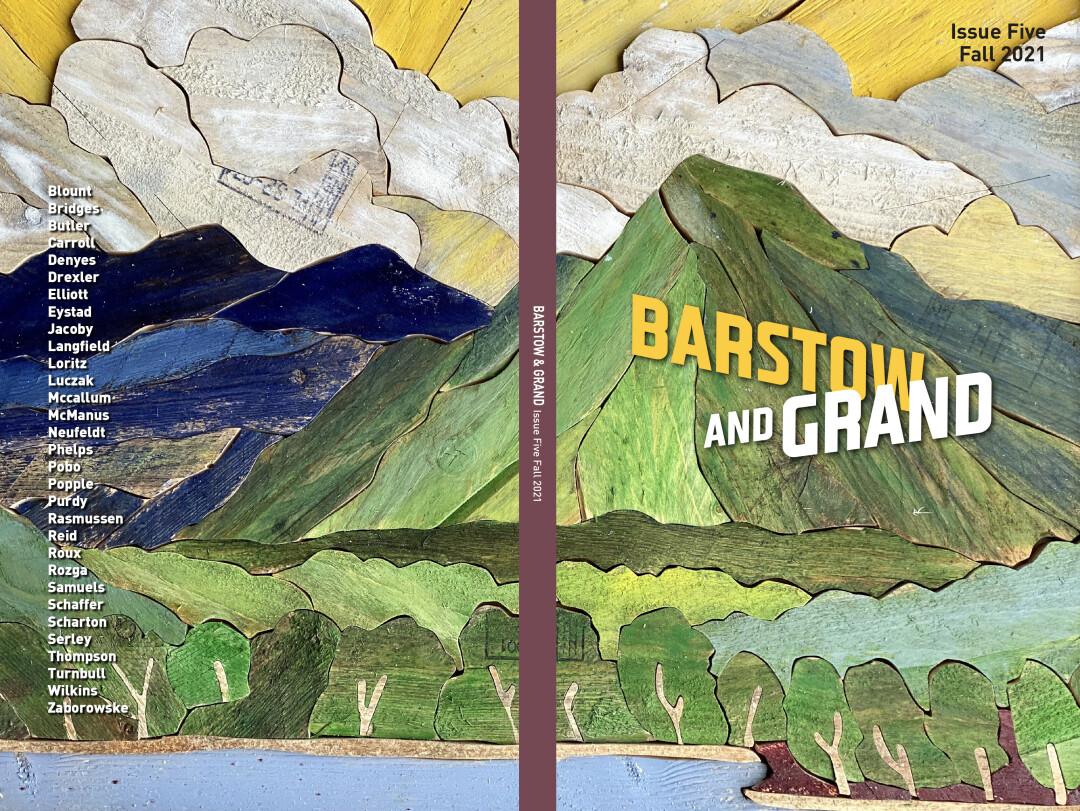 SNEAK PEEK. A preview of the fifth issue of Barstow & Grand, which is set to make its debut on Nov. 17 at Lazy Monk Brewing in Eau Claire. (Submitted photo)

Midwest writers often carry the stereotype of incorporating dull experiences and perspectives into their work, including elements of the changing seasons, vast agricultural landscapes, detailing the necessity of families and social circles to weather long winters, and exploring the charm of small towns.

But the newest issue of local literary journal Barstow & Grand aims to reinvent what it means to be a writer in northwestern Wisconsin.

“With every new issue, if we can uncover some new pocket or perspective of experience that isn’t what some people think of when they think ‘Upper Midwest,’ ” said founder and editor Eric Rasmussen, “then I think we can continue to be a worthwhile reflection of the Chippewa Valley itself: a place rooted in tradition that is working to embrace the sorts of change so many of us in the literary world are working toward.”

I think we can continue to be a worthwhile reflection of the Chippewa Valley itself:

a place rooted in tradition that is working to embrace the sorts of change so many of us in the literary world are working toward.

Barstow & Grand, an annual print journal founded and based in Eau Claire, was started in 2016 through the suggestion of the Chippewa Valley Writers Guild, which sought to expand its mission of supporting regional writers through craft talks, writing residencies, readings, and other high-impact initiatives.

In 2020, the publication expanded its scope to welcome submissions from all writers from the Upper Midwest – not exclusively those from the Chippewa Valley – to include more diverse perspectives and to reach out to more writers in the Midwest.

While the new issue – which makes its debut on Nov. 17 – walks the ambiguous line between tradition and revolution, it explores countless themes and experiences – some playful, yet some haunting, as many around the community reflect on the remnants of a year spent in turmoil as a result of the COVID-19 pandemic.

“We like to joke about how important the weather becomes in our poetry,” said Poetry Editor Kate Hinnant, “but then you see that for one poet, the ice is exquisite, and for another, an absolute horror. We hope our journal becomes a place where these varied experiences can help us see more of the Chippewa Valley than meets the eye.”

The latest issue also incorporates the Chippewa Valley Writers Guild’s latest writing endeavor, the “Hope Is the Thing” project, which asked writers and non-writers throughout Wisconsin to offer their perspectives on what gives them hope amid dark times. The style of writing is based on world renowned poet Emily Dickenson’s poem “ ‘Hope’ is the thing with feathers.’”

Writing from the project also appears in the Wisconsin Historical Society Press’s latest book, Hope is the Thing: Wisconsinites on Perseverance in a Pandemic, which includes over 100 essays and poems.

The fifth issue of Barstow & Grand notably features more work from undergraduate students than ever before, in addition to showcasing the broadest and most diverse selection of sub-genres yet, according to Chippewa Valley Writers Guild Founder and Director B.J. Hollars, including literary fiction, horror, fantasy, and a range of poetic forms.

"I think the message we're trying to send is simply: There's a place for you here.

“I think the message we’re trying to send is simply: There’s a place for you here,” Hollars said. “We’re trying hard not to pigeonhole the publication into a magazine that only publishes a particular type of voice or style.”

And expanding their voice and style is integral to their growth as a literary journal.

“I like to think Barstow & Grand is proof of the strength of our community,” Rasmussen said. “We include students next to professors next to lifelong local writers and folks whose connections to the area are a little more fleeting. We strive to serve as the metaphorical town square of our little literary settlement.”

In response to the increased racial awareness and search for equity, Barstow & Grand recommitted itself to actively seeking out diverse stories – which can be an immense challenge when every submission is read blind, or without knowing the author’s identification.

“What makes this issue extraordinary,” said Prose Editor Katy Hackworthy, “and any issue, really, is seeing emerging voices trust us with their work. Art is a practice in vulnerability, and often an extension of ourselves, so I relish in providing a brave space for writers to take chances and express the deepest parts of themselves.”

Snag a copy of the latest issue of Barstow & Grand at their release party at 7pm on Wednesday, Nov. 17 at The Lazy Monk Brewing (97 W. Madison St., Eau Claire). For more information about Barstow & Grand, visit barstowandgrand.com, check out their Facebook at facebook.com/barstowandgrand, or on Instagram at @barstow_and_grand.