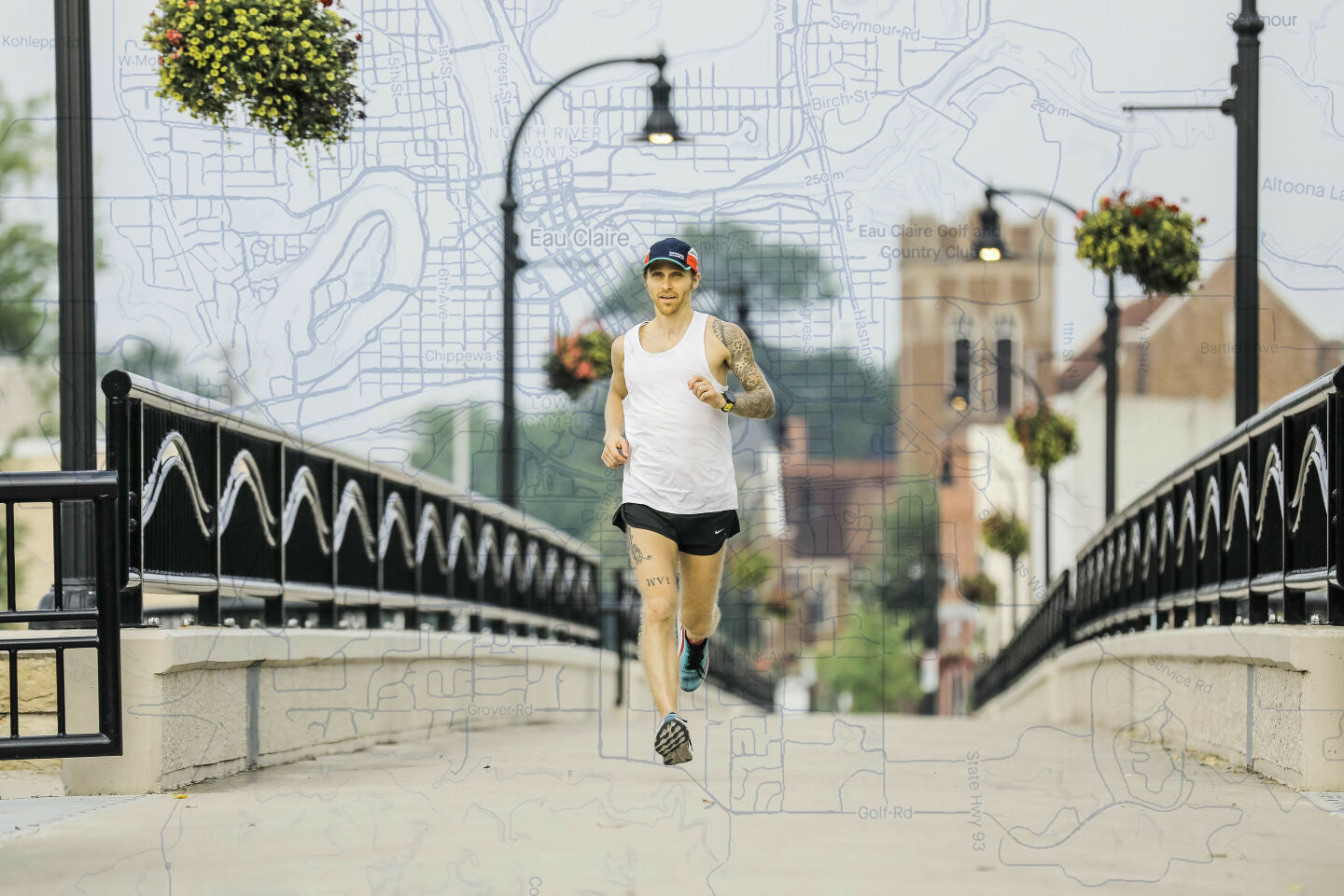 Facing chronic illness and physical injury, local runner Alex Rongstad made it his mission to run every street in Eau Claire.

“Evidence would suggest that I’m not really geared towards this,” said local runner Alex Rongstad, gesturing toward a looping map of Eau Claire, detailing the thousands of miles he has run over the past few months.

At a young age, the Eau Claire native was diagnosed with osteomyelitis, a rare bacterial bone infection. His left ankle, he admitted, is slightly smaller than his right. He has broken his collarbone numerous times – the first time when he was born, and another time, he said, on the day before the infamous mile run in fourth grade, known as the Jog-a-thon in the City Wells. (“I was actually secretly excited about it,” Rongstad confessed, “because I didn’t want to do the mile run.”)

As he grew to love running in his late teens and early twenties, one of his lungs collapsed, making running dangerous and nearly impossible. Yet, he persisted.

When running the Eau Claire Marathon in 2018, he dropped out as a result of heat stroke – a side effect of his wintertime training and the particularly warm race day in May. Only a month later, he was diagnosed with Lyme disease. “That completely stopped everything,” Rongstad said.

“I was burning the candle at both ends,” he continued, admitting he worked late nights as a bartender at The Lakely, then woke up early in the morning to train, running miles he had never run before. “I was not balanced. I was not running slow to sustain myself; I was going hard all the time. And there was this moment when … I was giving up hope on a lot of things. That was the night before I started getting sick.”

As he laid in bed – in such pain that even thinking hurt – he found peace only through being still, meditating. “That was when I realized the true power of the mind,” he said, “and how there was peace beneath all the suffering … if I could just be still enough to get there. That was this transformative moment of feeling hope again.” 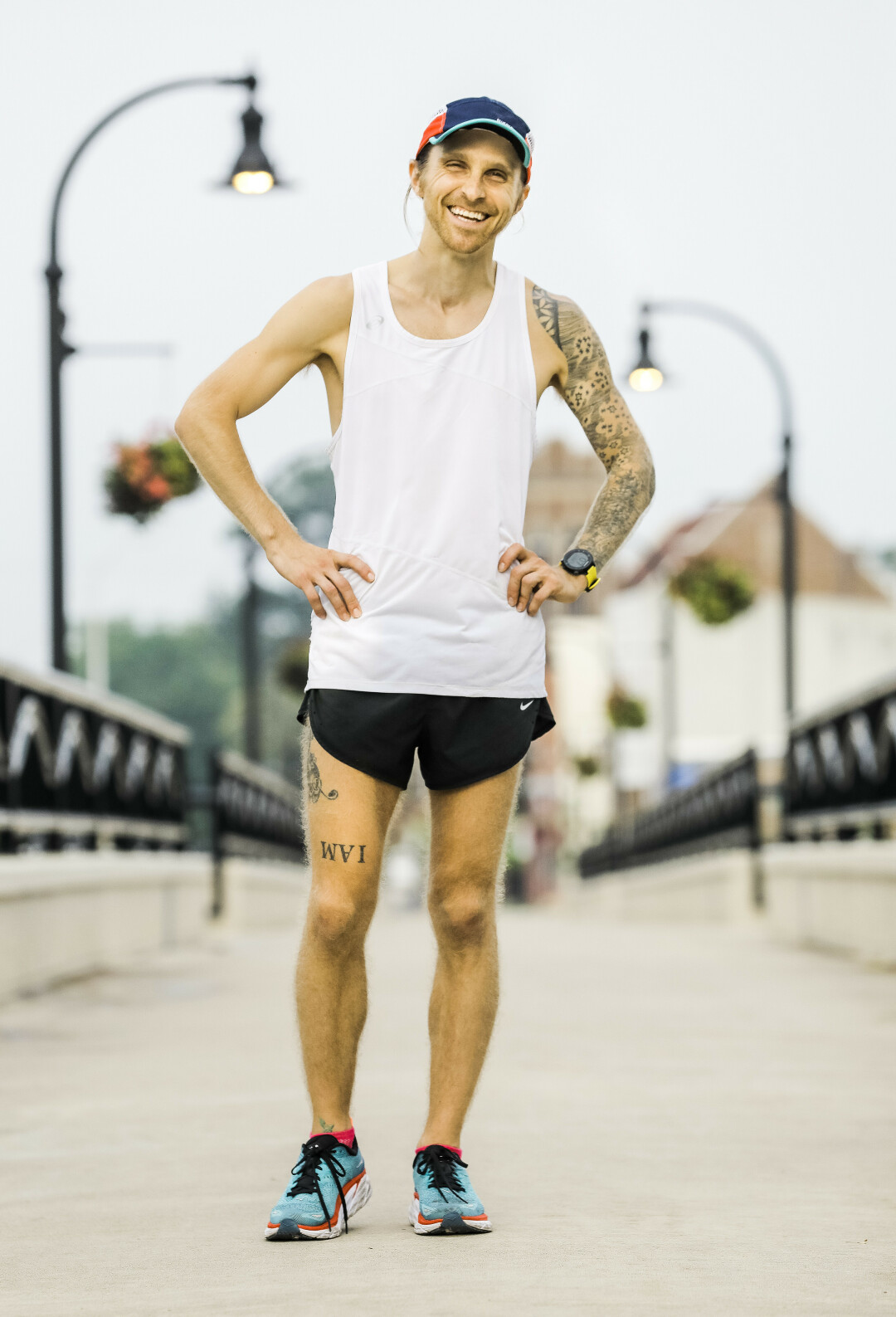 Rongstad has always been a runner. As a youngster at Northwoods Elementary School, then Northstar Middle School, then Eau Claire North High School, he found joy in running. What he didn’t find joy in, however, were the competitive and unhealthy accomplishments and the method used to reach those accomplishments that many distance runners define as success.

He came to this realization as the COVID-19 pandemic made news headlines in January 2020 – while he was visiting China.

As the pandemic spread viciously throughout the country – and the world – Rongstad said he was moved by how “everyone was aware of how their choices affected the collective - everyone was on the same page” in China.

He realized that – as someone with a compromised immune system – it was time to prioritize his health. And that’s when he developed what he now calls “The Eau Claire Project” – or a goal to run every single street in Eau Claire by the end of the year.

“We all set standards for ourselves when it comes to the things we’re passionate about, and I really hadn’t fully realized what my relationship was with running at that point,” he reflected. “And what it really is … is the joy, the true joy of doing the action.”

That joy comes from a healthy relationship between mind and body, ensuring that everyone feels joy in their process of running. He found kindred spirits through the Blue Ox Running community, learned how to run using heart rate training (or maintaining a consistent heart rate between 120-130 beats per minute). This ensures you never run too fast, which so many people end up doing, leading to burnout and overuse injury.

Running slow was the key for Rongstad finding joy in his process He developed his own calisthenics routine, dubbed “Alexthenics,” including exercises he exclusively finds joy in (it’s hard to find joy doing exercises you detest). His new routine circled back to a core idea that he learned while in China: beginning again. 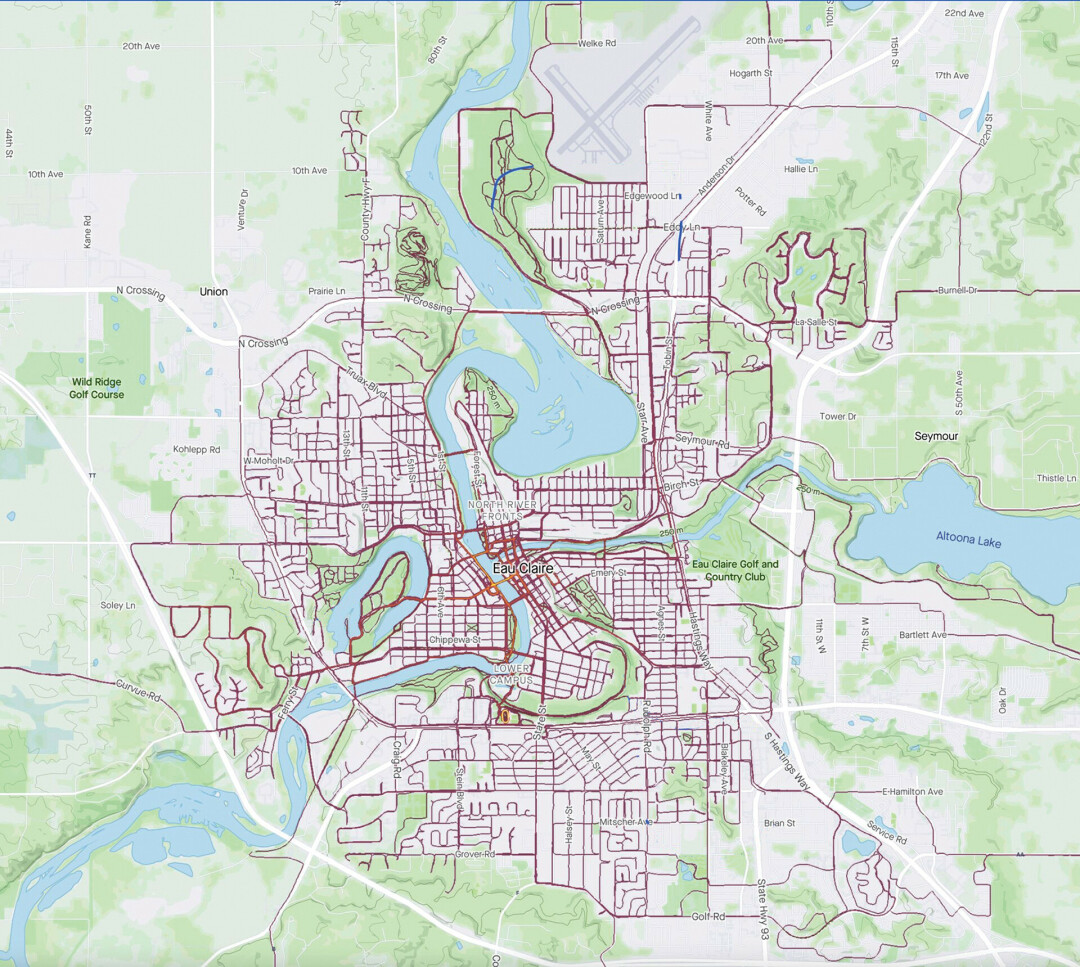 THE EAU CLAIRE PROJECT. A current heatmap (via Strava) of runner Alex Rongstad’s progress running every street in the City of Eau Claire. Each red line designates a street he has already run, as of late July 2021.

“Any time you feel out of balance, just begin again,” he said, “and by making your own ‘joy’ the foundation of your process, you’ll always have a new blank slate to create from.”

He now begins all of his runs starting from home, stretching outward, tracking hundreds of miles per month through an app called Strava. “All streets lead to you,” he said. “Eau Claire fosters that notion that we’re not that far apart. We’re really close, in fact. If we can get past the superficial differences that we have … we’re really not that different.”

Even, he said, people who don’t like running and people who do. He reflected on how so many folks feel embarrassed or anxious about training “the wrong way.” Really, staying healthy is simple.

While pursuing a more healthy training routine, his new passion project also allows him to explore parts of the community he has never seen before. He runs through his old neighborhoods, seeing playgrounds he ventured through as a youngster. And, as he explores the unfamiliar parts of town, he realizes that every single person in this city has deep memories and experiences of Eau Claire - and that connects us to one another.

I realized wanting to run every street for me, it’s kind of like a metaphor for wanting to meet everybody, like wanting to know and be connected to everybody in the city.

So the project is more than running; it’s building community through movement, he said.

“Everyone has that connection, in some form, to where they grew up, to where they are,” Rongstad said. “That matters. That’s real, and it’s a part of who you are. And so I wanted to get that story. I realized wanting to run every street for me, it’s kind of like a metaphor for wanting to meet everybody, like wanting to know and be connected to everybody in the city.”

“And,” he added with a shy grin, “that’s a much bigger project.”