stunt by Scorch From 92.9 The X will raise funds for shelters, K-9 units 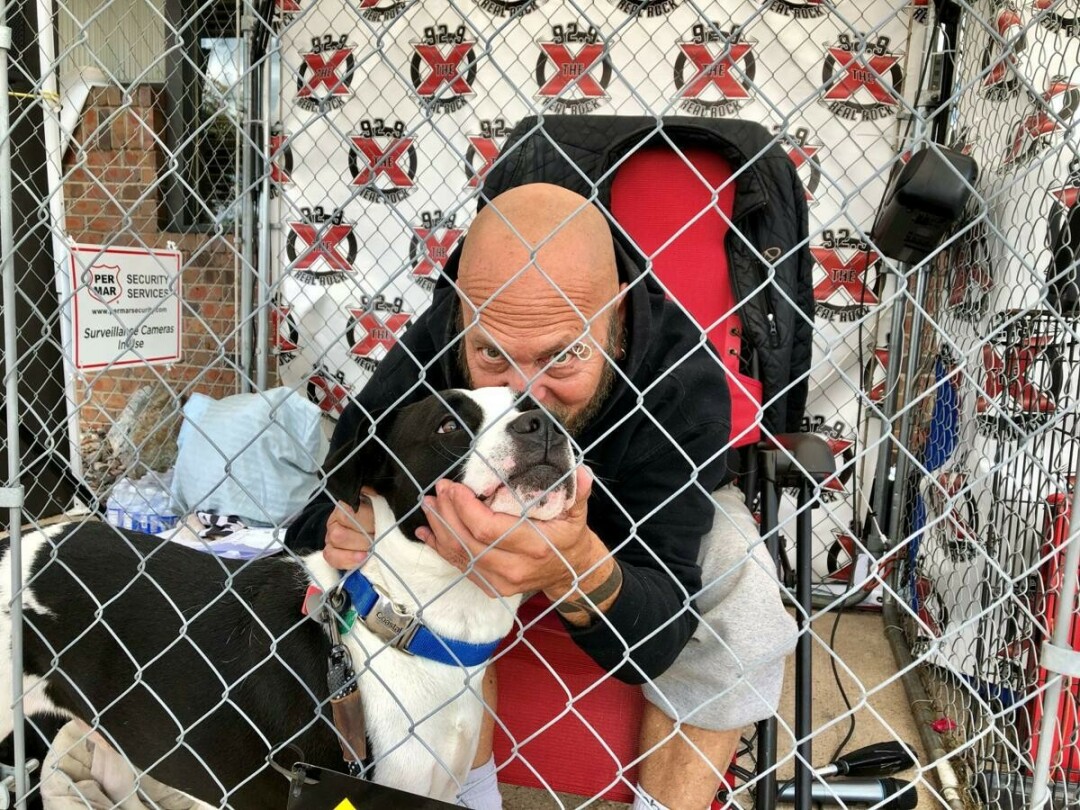 DOGGONE DETERMINED. Scorch of 92.9 The X will spend Tuesday, Aug. 10, through Friday, Aug. 13, in a dog kennel as a fundraising stunt. (Submitted photo)

If you walk through the Milwaukee Burger Company’s parking lot between 12pm on Tuesday, Aug. 10, and 7pm on Friday, Aug. 13, you might see a pretty bizarre sight: a local guy spending a total of 79 hours in a dog crate.

Why? The answer is simple: “I love animals,” Scorch said. “A police dog doesn’t sign up to be a police dog,” he added. “And if they send a dog in for whatever reason, a dog is going to get either shot or stabbed. I don’t like that. That’s not fair. Better than having a human be shot or stabbed, but still, if I can save them both, then I want to save them both.”

“I love stunts,” he said. “I love doing stuff like this.”

I love stunts. I love doing stuff like this.

This isn’t the first public stunt pulled by the radio personality: Scorch has been raising funds for humane associations and animal shelters across the country for 10 years, the last four of them in the Eau Claire.

“I love stunts,” he said. “I love doing stuff like this.” Aside from supporting animals, Scorch said he has ridden a water slide for 48 hours straight to support children with cancer, has been buried underwater and gone live on his show underwater, has been buried underground and gone live on his show underground, and has lived in a trailer for a week until he collected enough food donations for the homeless to fill an 18-wheeler.

Since launching the fundraiser in Boston, Scorch estimates he has raised over half a million dollars for humane associations and gathered funds to donate more than 1,000 bulletproof and stab-proof vests for K-9 officers. And it’s no easy feat, the radio personality said. 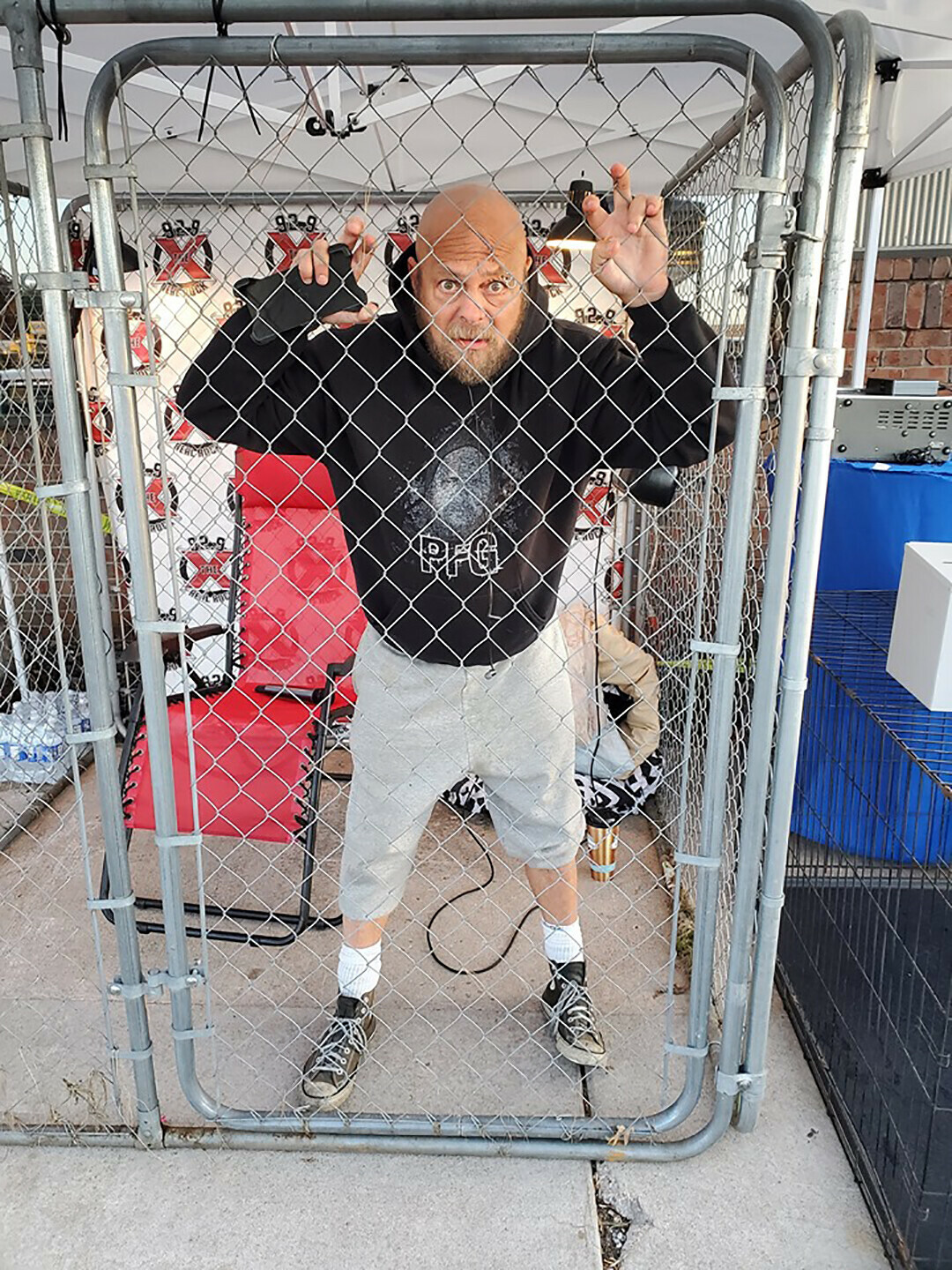 “How do I prepare? The first year, I have no idea how I prepared,” he said. “Now I know what I’m in for.” He said he doesn’t sleep for the first two days, and gets a grand total of about three hours of sleep out of that 79 hours in the kennel.

Folks bring him food to eat and water to drink, and he mostly spends his time chatting with passersby. He’ll even go on-air on the X from his crate. “Oh yeah,” he said. “If it rains, I get soaked.”

This year, he hopes to have local TV stations report live from inside the kennel as well. And, as an added bonus, this year, his fellow radio host T-Ri will also spend time in a kennel.

“Eau Claire has been a really good area for this charity,” he said. Last year, he estimates the fundraiser gathered about $14,000 in donations. The year prior, the station raised $27,000.

This year, folks can donate money to Scorch’s Paws for the Cause in person or online at 929thex.com/paws-for-the-cause. They also accept donations of dog and cat food, litter, cleaning supplies, toys, and more.

“Friday the 13th always has this negative connotation,” he said. “Hey, you know what? Let’s turn it around for the animals.

“Friday the 13th always has this negative connotation. Hey, you know what? Let’s turn it around for the animals.”

The timing is absolutely intentional, as the last day in the crate is on Friday the 13th, and Scorch wants to eliminate the superstitions around the holiday. “Friday the 13th always has this negative connotation,” he said. “Hey, you know what? Let’s turn it around for the animals. Let’s make this the best Friday the 13th ever for these animals. And I bet you, it’s going to go really, really well.”

As it turns out, superstitions can be really harmful for furry friends in shelters. For example, according to the Comprehensive Animal Risk Database (CARDS), black cats and black dogs make up the majority of admitted animals in shelters – making up nearly 30% of incoming animals. While adoption rates run similar to any other pet, the large quantity of black animals admitted into humane associations means there’s actually a higher rate of euthanasia among black pets, simply because not enough people adopt the pets quickly enough. So for many of these animals, eliminating superstitions is a life or death matter.

As part of this paw-some fundraiser, Budweiser’s Bud Light Seltzer is sponsoring 18 cans of a dog-friendly beer, brewed specifically for our canine pals using bone broth. Economy Furniture is also auctioning off a $1,000 recliner, with proceeds benefiting local animals. And, if you grab a dog biscuit from Scorch in the dog crate, you can get 10% off at the Milwaukee Burger Company, with 10% of the proceeds from that meal going to support local shelters and K-9 programs.

Learn more about Scorch’s Paws for a Cause, and donate online, at 715store.com/product/paws-for-the-cause-donation-2021.