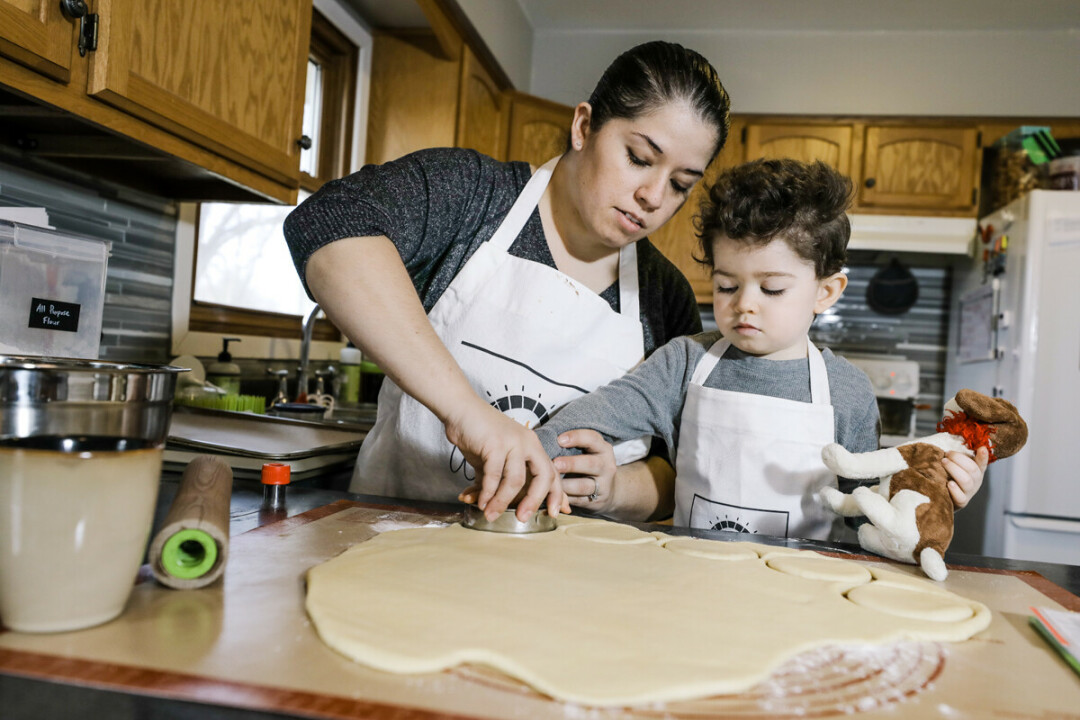 WILD FLOUR. Alyssa Gilliam of Chippewa Falls started a home-based bakery after her oldest son, Mason, was diagnosed with a gastrointestinal illness and she began making unprocessed, gluten-free goodies. Not long after, Riker (age 3) jumped in on the baking fun along with his trusty side kick, his stuffed dog Red.

Some might call Alyssa Gilliam of Chippewa Falls “supermom.” Others call her the founder and owner of a new home-based bakery, Wild Flour Bakery. But to Gilliam, the two titles are one and the same.

After pursuing a bachelor’s degree in child psychology and special education, Gilliam changed gears to start a home bakery after her oldest son, Mason, was diagnosed with a gastrointestinal disorder that prohibited him from eating processed foods, fructose, or gluten. As an individual on the autism spectrum, Mason already had a pretty limited diet, so Gilliam knew she had to take matters into her own hands (literally!) to keep her son happy and healthy.

“The only choice I had was to start baking his food,” Gilliam said, “making it from scratch. I started out making bread, and then it turned into the pizza rolls, and then I started making desserts.”

The game-changer came last year when Gilliam’s husband, Chris, ran for City Council in Chippewa Falls. As part of his campaign, he and his family began running bake sales. “And it really just blew up from there,” Gilliam said.

This past February, Gilliam officially opened her home bakery, with plans to soon partner with LunchboxEC to share their kitchen as a commercial space until Gilliam can secure a permanent brick-and-mortar location. 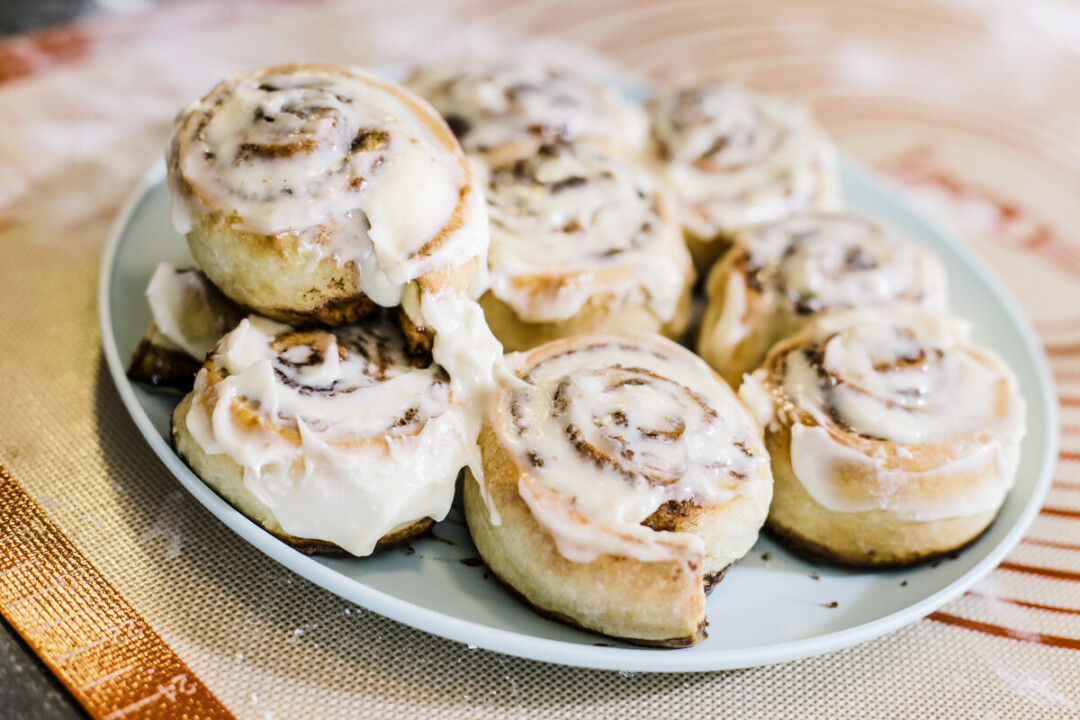 “We really just want people to be able to enjoy the breads and sweets without worrying what’s in it, like you would at the store,” she said. “You can look at our ingredients and know that it comes from the finest producers out there… and we don’t add any of the preservatives.”

The family – including Chris, Alyssa, Mason (5), and Riker (3) – bakes a little bit of everything: breads (from banana bread to jalapeño cheddar bread, as well as white and wheat breads), cookies, brownies, bars, cupcakes, donuts, and a plan to introduce personal hand pies soon. Everything is made-to-order, ensuring it’s as fresh as possible, with a one- to three-day turnaround time from processing orders right to your front door. 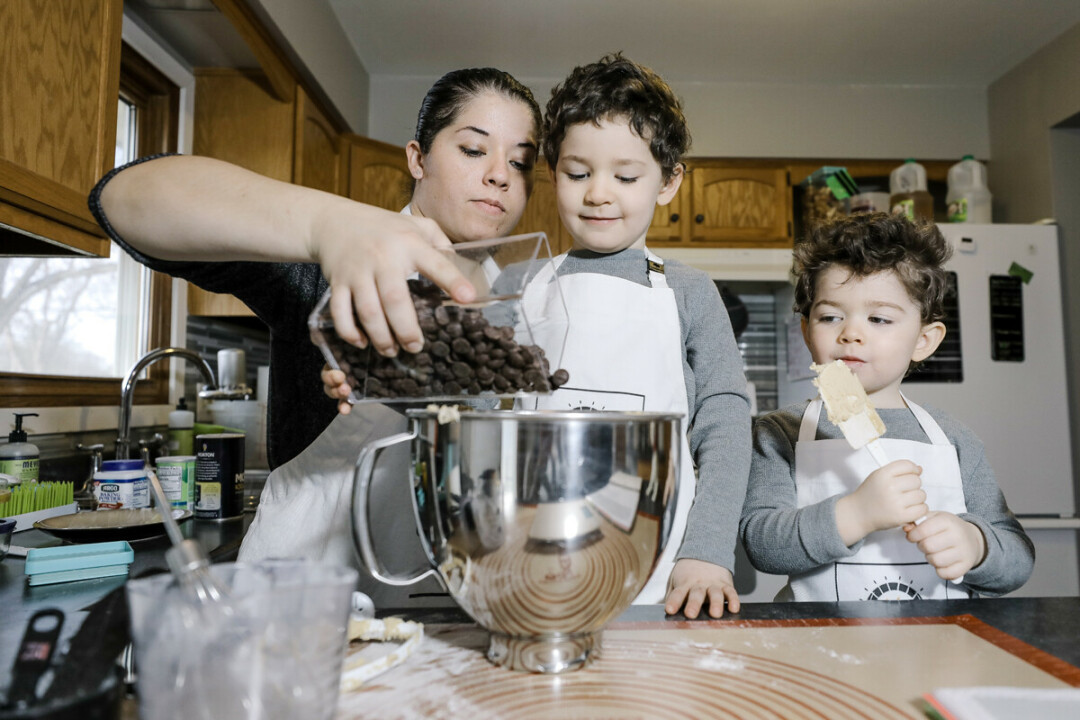 “We are truly a family business,” Gilliam said. “We’re not out there for the money. We’re doing it for our family and to bring the same thing that we wanted out of it to the community, which is 100% made-from-scratch ingredients. … It’s as healthy as you can get.”

The family wakes up at the crack of dawn – or around 3 or 4am – to prove their assorted breads and put their goodies in the oven. By 10 or 11am, they send out their orders for delivery or pick-up. The boys help with every step of the process: baking, decorating, and helping with delivery – though their favorite part is probably taste-testing, according to their mom.

“Working with my boys, them having autism, there's not a lot of things we can do together as a family that can hold their interest for very long. So baking is really the first thing we've had as a family that we can all really get into and enjoy.”

“Working with my boys, them having autism, there’s not a lot of things we can do together as a family that can hold their interest for very long,” she said. “So baking is really the first thing that we’ve had as a family that we can all really get into and enjoy. So that’s been really nice just to have something to share with them.”

Though Gilliam grew up in a family of bakers, she’s constantly learning something new. “With baking, it’s something you can always grow into,” she said. “There’s always something new to learn. … You can’t get bored.” 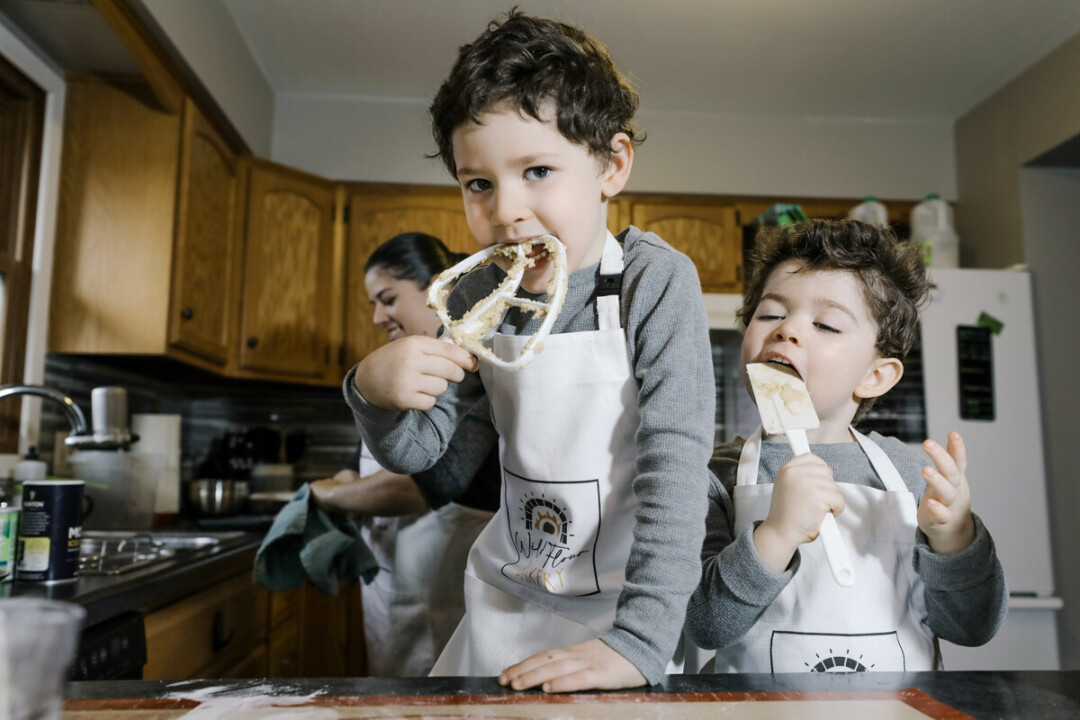 TASTE TEST, ANYONE? After the baked goods for sale are packaged and ready to go, there's nothing wrong with a little taste test, or at least according to Mason (5) and Riker (3).

In the future – once the family has secured a brick-and-mortar location – they hope for their business to be an open door for kids with special needs coming out of high school and looking for a job.

“From personal experience, we know that’s hard to do, and I know we have a lot of local families around that have kids who aren’t able to find a job,” she said. “So we’re hoping to start a program with our local school districts that can help integrate kids into the workplace.”

“That’s a little bit in the distance,” she added with a laugh. “That’s another goal of our bakery is to unify our community in that respect.”

Check out Wild Flour Bakery at their Facebook page at www.facebook.com/WildFlourBakeryWI.