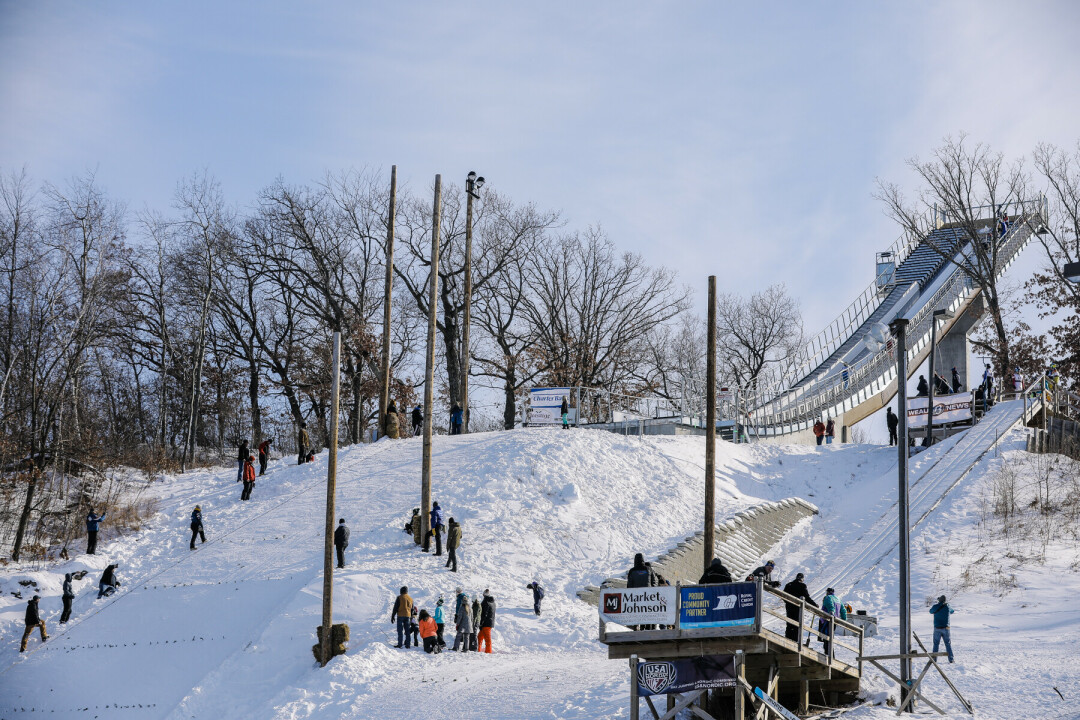 The new 55-meter ski jump on Mount Washington in Eau Claire was used during the 89th Annual Flying Eagles Invitational on Feb. 20, 2021.

If you regularly drive along the west side of Eau Claire, over the past few years you have likely noticed a tall structure growing atop Mount Washington. First, a column, then girders; now in the winter of 2020-21, the 55-meter ski jump has come to full realization. Its inaugural use was for the 89th Annual Flying Eagles Invitational on  Feb. 20-21, and years of planning and volunteer work led to the completion of the project.

According to project engineer and manager Matt Gundry, planning began more than a decade ago. Prompts were the deterioration of the old 40-meter structure, the evolution of the sport, and facilities at Mount Washington. Following a donation from the Severson family, approval eventually was made, and the construction saga began.

Volunteer help was critical in construction. According to the Flying Eagles Ski Club’s Tami Jastrow, they had “over 40 club and other divisional club volunteers, along with a lot of community support from such groups as the CVTC lineman program students and the Eau Claire Police Department.” Approximately 2,000 man hours came from associates of the ski club’s Dan Mattoon and Prestige Auto.

So much of this had to be figured out by trial and error in a hands-on manner.

Challenges were plenty, from grading the concrete landing between thunderstorms, to dealing with the dynamics of steel and plastic while laying the track assemblies. “So much of this had to be figured out by trial and error in a hands-on manner,” Gundry says.

The result is the only 55-meter jump in the United States, one that features a clothoide in-run curve. According to Gundry, the design optimizes the physics of modern ski jumping. “The improved landing profile results in landing forces that are less than half as hard as designs from a decade ago.”
Gundry notes that the new facility will help local athletes better prepare for new jumps in other locations, while featuring infrastructure for better jumping availability, and contains industrial-grade composites and galvanized steel to keep it in use for decades.

The next time you drive along Clairemont Avenue or Menomonie Street, take a glance up at the new ski jump – when you can do so safely, of course. At the top, you may see some small figures: the next generation of Eau Claire-area ski jumpers practicing for future glories. 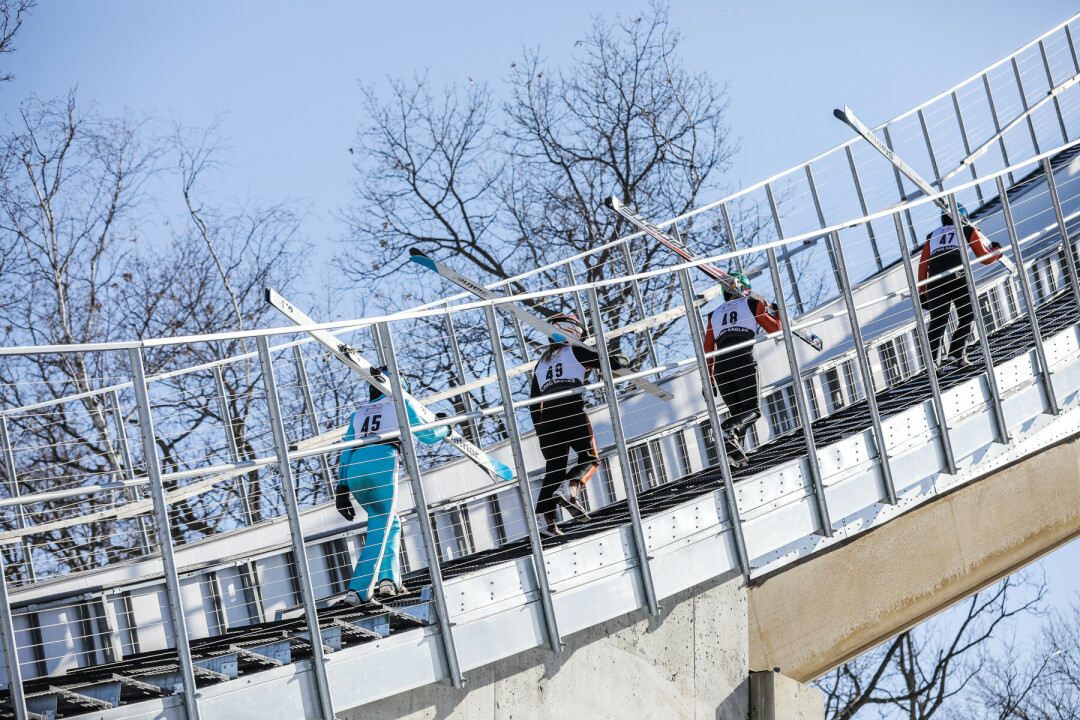 Here’s an expanded Q&A with Matt Gundry of the Flying Eagles Ski Club about the new 55-meter jump on Mount Washington.

Volume One: How was the determination made to build the new jump? Why was the old jump in need of replacement?

Matt Gundry: Replacement of the existing 40m jump had been on the club wish list for over a decade when the initial HS55 concepts were formulated. Although the old jump had served the club well and helped train numerous international level athletes, deterioration of the wood ramp structure was becoming a concern. Evolution of hill design standards and jumping techniques over the decades since the 40m had been constructed meant that the old style hill geometry no longer matched up with the modern rendition of the sport. Finally, changes to the sizes of the small training hills at Mount Washington resulted in a poor fit for the size of a 40m hill – it was not much larger than the new 30m and yet was less than half the size of Silver Mine. The club felt that a 55 or 60 meter “medium hill” would better fill the gap between the 30m “small hill” and the 85m “normal hill” at Silver Mine.

A very generous donation by the Severson Family prompted the club to develop plans to build a new jump that would “complete” the Mt. Washington training complex. Various alternatives were then explored to try to optimize the jump within the limited space available. After consideration by the club board, and with technical support of the International Ski Federation, the sanctioning body for ski jumping, an HS55 design was finalized. Upon review of the jump plans, and additional fundraising, the club board approved construction and the four-year odyssey was set in motion. 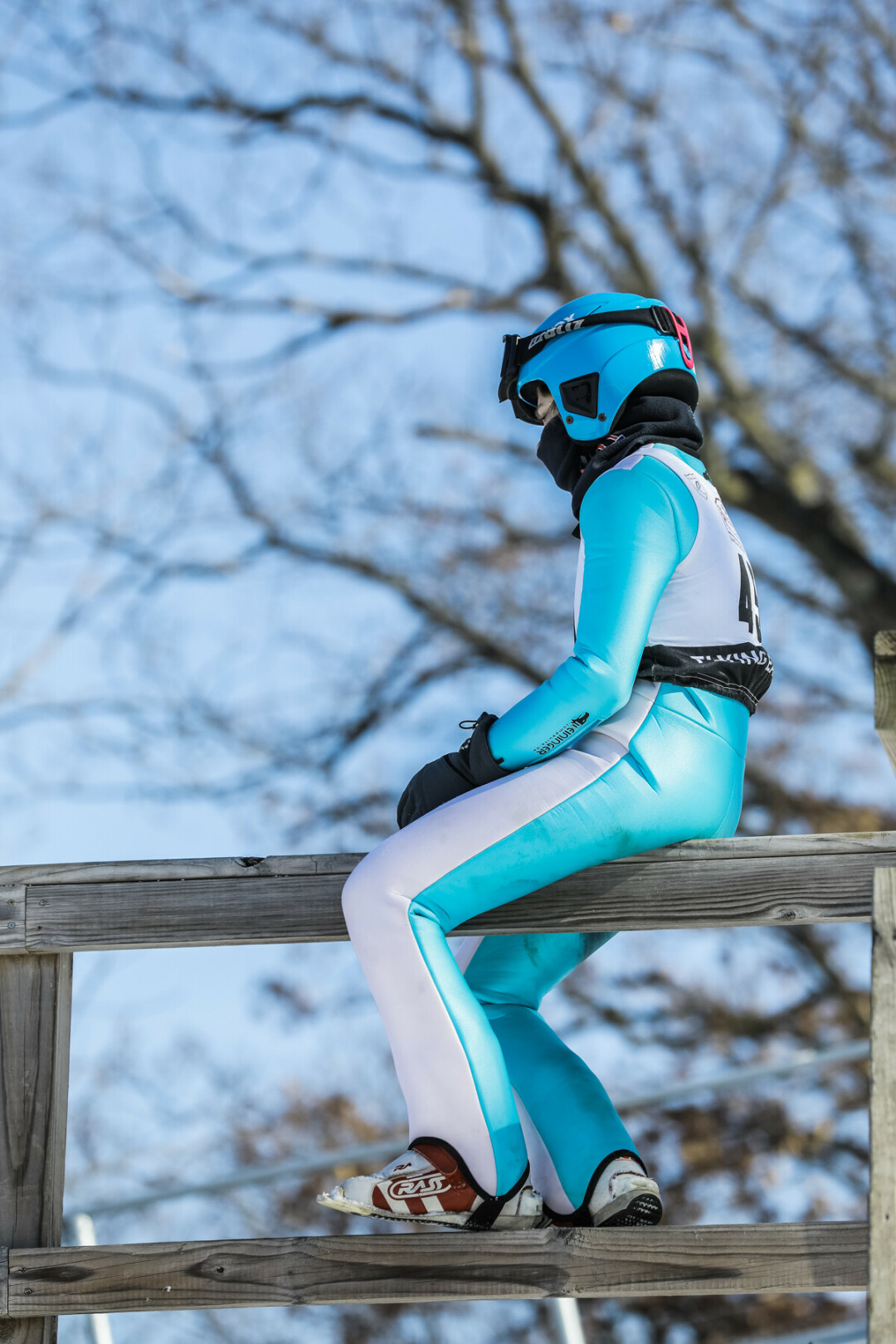 What was the most technically-challenging part of the overall construction?

In general, staging and planning the construction in a manner that allowed the maximum amount of the work to be safely completed by volunteers was challenging. Each new task came with a requisite new set of skills that needed to be learned and practiced on the fly. The materials and methods needed for this project differ considerably from what the average home handyman requires.

Forming and pouring the concrete on the landing was grueling and required some innovative techniques to shape, form, reinforce, and pour the concrete in the very short period of time before the next thunderstorm came along to wash out the sub-grade. However, from a technical standpoint mass production and installation of the track assemblies over the past several weeks was one of the biggest challenges. While maintaining the very tight tolerances necessary so that the pieces would fit together well, the volunteers also had to solve issues with finicky materials like stainless steel fasteners that would bind easily and plastics that had wildly differing thermal expansion characteristics. So much of this had to be figured out by trial and error in a hands-on manner. We learned a lot in the process, and already have ideas for improving the design as we implement the new tracks at other hills in Eau Claire. 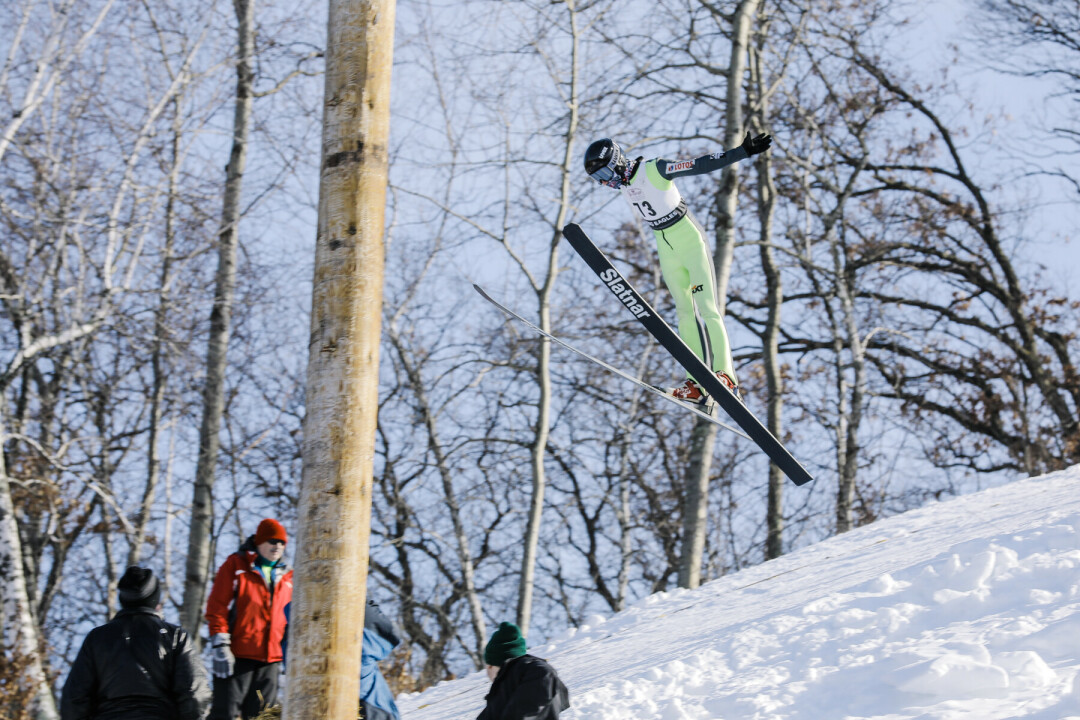 What are the most interesting features of this jump?

From the athlete perspective, the most interesting aspects of the design are the spiral, or clothoide, in-run curve and the low-force landing profile. The clothoide in-run begins with a very gradual curve which gets progressively tighter as the athlete approaches the takeoff. The advantage of this new standard (the concept is just over a decade old) over the older style circular curve is that it does not have an abrupt transition at the start of the curve to disrupt the athlete's balance. The tighter curve at the takeoff creates a slightly greater G-force which preloads the skier better for the jump motion, but does not subject the skier to prolonged high G-force like the circular curve.

Over the past 15 years or so, the International Ski Federation has taken a hard look at the physics of ski jumping to better establish more appropriate biomechanical limits for design of ski jumps. The improved landing profile results in landing forces that are less than half as hard as designs from a decade ago. This reduces the risk of injury in falls or where the athlete out-jumps the hill, reduces risk of repetitive strain injury, and helps inspire confidence in developing athletes to fly further down the hill. As ski jumping has progressed to become a more inclusive sport, this type of safety feature has become ever more important.

For both jumpers and non-jumpers, the experience of simply being on this jump is intended to inspire the feeling of flight even if your feet don't leave the ground. The outer railings are barely visible cable railings. The walking surfaces are open grating. The underlying structure is cantilevered, so much of the structure is open below. Standing on the start platforms at the top of the new HS55 tower is altogether different than standing on a jump built into the terrain or on scaffolds with solid decking and railings. The panorama extends well below the horizon, providing a view seconded only by free falling.

Finally, the jump is designed to reduce strain on club resources wherever possible. The new track system follows on the Silver Mine track design implemented by Dave Tomten about five years ago to vastly reduce the amount of snow required to be placed on the tower and shaped. The open stair gratings and cable railings prevent accumulation of falling snow, reduce drifting, and simplify removal of what little snow does accumulate on the structure. The materials selected for the construction are industrial grade composites and galvanized steel, not expected to experience warping, decay, or significant weathering for decades.

What advantage, if at all, does the jump provide the ski jumping community in the Eau Claire area?

The new HS55 is the only medium-size jumping hill in the U.S., and one of the few in the world, that has the clothoide in-run. It is also one of the few jumps that has been designed for reduced impact forces. Our athletes will be better prepared to compete on new jumps like the large hill being completed in Iron Mountain, Michigan, and will be able to take more practice jumps with less fatigue and risk of injury. The infrastructure improvements accompanying the new jump aim to increase availability of the jump by reducing the time to prepare the jump at each change of seasons. 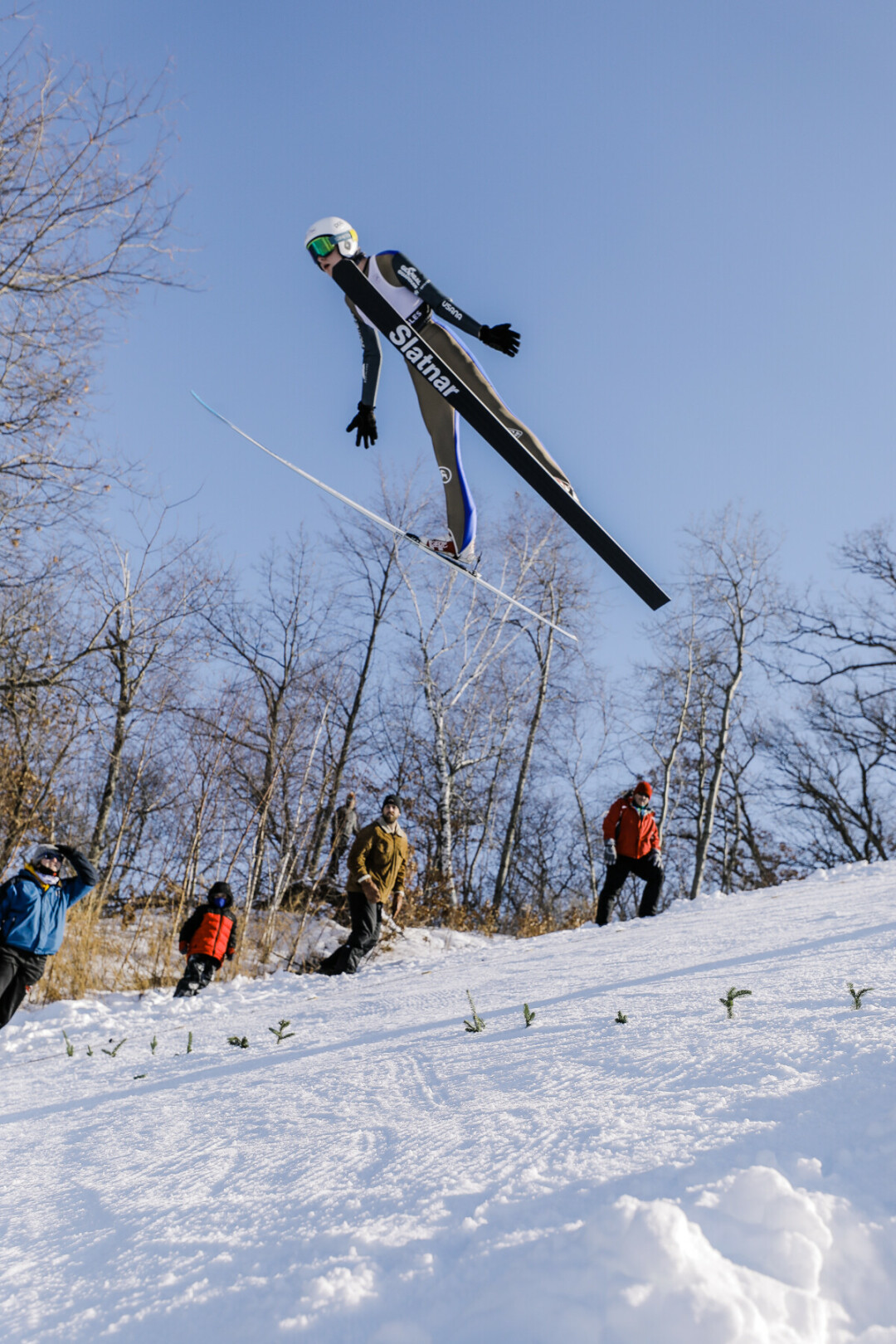