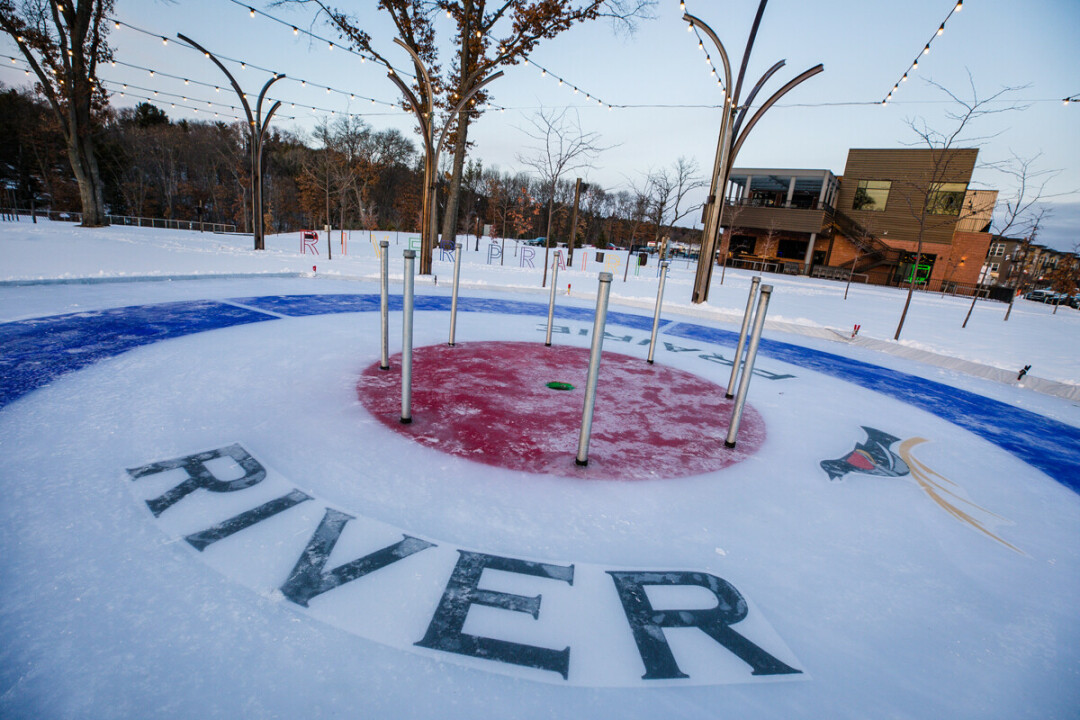 A crokicurl rink has been created in Altoona's River Prairie Park. It's the first of its kind in the United States. (Photo by Andrea Paulseth)

Eau Claire may be the North American capital of the popular yard game kubb, but Altoona is icing up to be the nation’s new epicenter of a growing Canadian sport, crokicurl, as River Prairie Park recently became home to the first crokicurl rink in the United States.

Crokicurl combines the Olympic ice sport of curling with crokinole, a Canadian board game in which players flick small chips toward the highest-ranking region on an octagonal board. Crokicurl, however, is played on a large ice rink and substitutes curling stones for small chips.

“I think of it the same way as kubb,” said Altoona City Administrator Mike Golat, who enjoys curling. “Eau Claire has become the epicenter of kubb in the United States, and I think we have an opportunity here to promote crokicurl, and hopefully it takes hold and becomes popular.”

The new rink in River Prairie is the first of its kind in the United States, and was created after Altoona Recreation Manager Debra Goldbach noticed the sport on the Facebook group Women in Parks and Recreation, where women from around the U.S. and Canada offer inspiration to one another for new recreation activities and sports.

“I thought, ‘Oh my gosh, this is what we’re looking for,’ ” Goldbach said. “Something new and something different.”

I thought, ‘Oh my gosh, this is what we’re looking for. Something new and something different.’

altoona recreation manager, on discovering the canadian sport of crokicurl 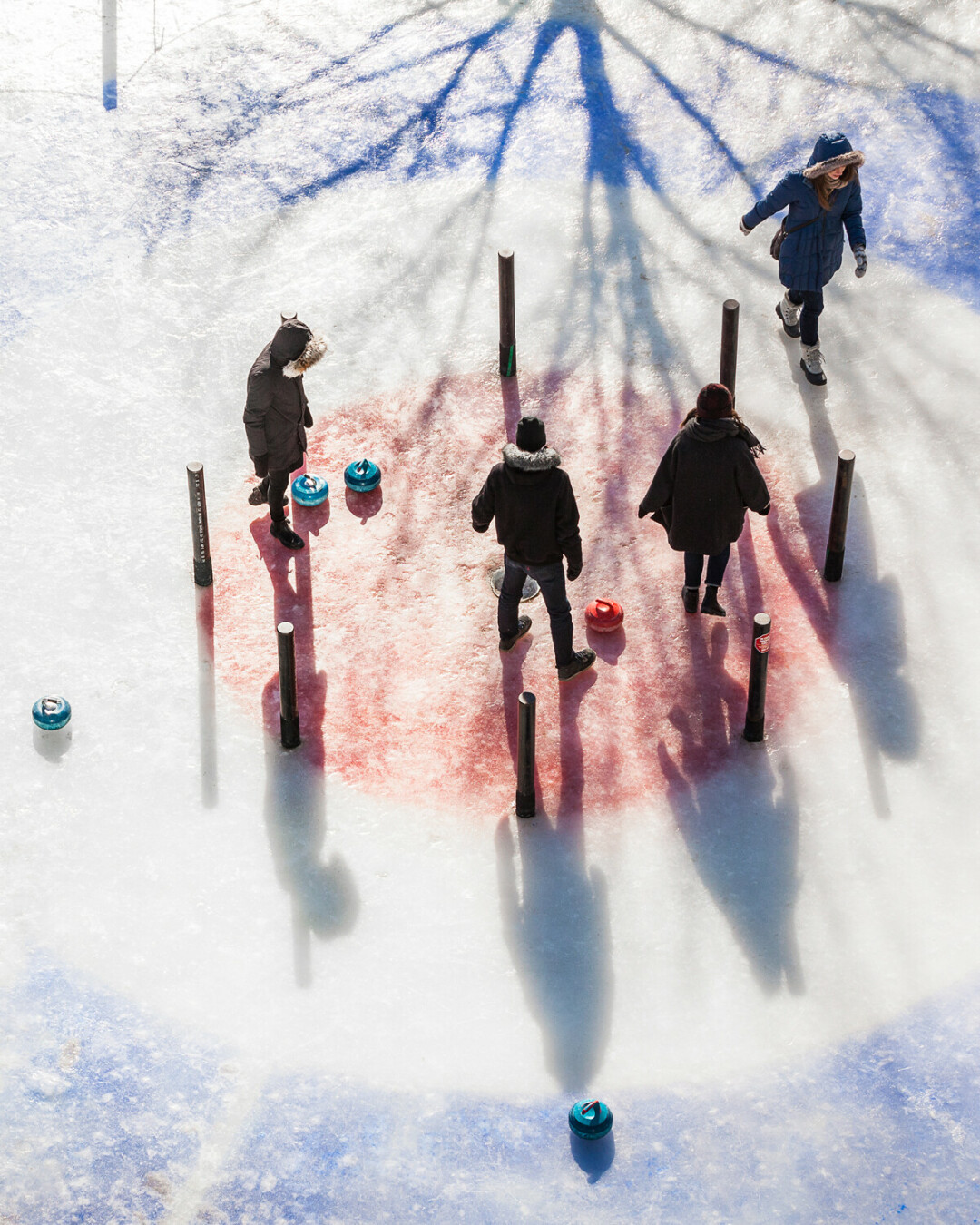 A crokicurl game in Winnipeg, Manitoba, where the sport was invented in 2017. (Submitted photo)

Crokicurl evolved from the board game crokinole. If you haven’t heard of crokinole, don’t fret. According to Liz Wreford – one of the creators of crokicurl – crokinole is a popular Canadian board game, but one that is strangely unknown across the rest of the globe.

Crokinole is played on an octagonal, wooden board with disks that you flick into a depression in the middle of the board. Crokicurl, on the other hand, was developed after Wreford and her colleagues at Public City Architecture in Winnipeg, Manitoba, wanted to see if they could adapt the board game to a life-sized sheet of ice. It doesn’t get any more “Up North” than that.

The goal of crokicurl is to get your rock to the center circle, which gets you more points than your opponent. The game can be played one-on-one or with teams (generally “blue” versus “red”). Players stand across from each other on four quadrants of ice. The first player slides the curling stone (unlike curling, there’s no sweeping by teammates) and aims to get it in the center circle. If they do so successfully, they get 20 points. If they don’t, the opposing player aims to hit the first player’s rock out of the way. If the second player doesn’t hit the first player’s rock, player two’s rock is removed, and they have to try again.

“There’s a lot of different strategies,” Wreford said. “The idea is to block other players, but it’s pretty hard.”

By the end of the game, the player with the most points wins.

“It’s also a winter sport that no one’s an expert at,” Wreford said. “So everyone’s starting from scratch. Everyone’s kind of at the same level … so it’s something fun and new to play.”

It’s also a winter sport that no one’s an expert at. So everyone’s starting from scratch. Everyone’s kind of at the same level … so it’s something fun and new to play.

one of the inventors of crokicurl 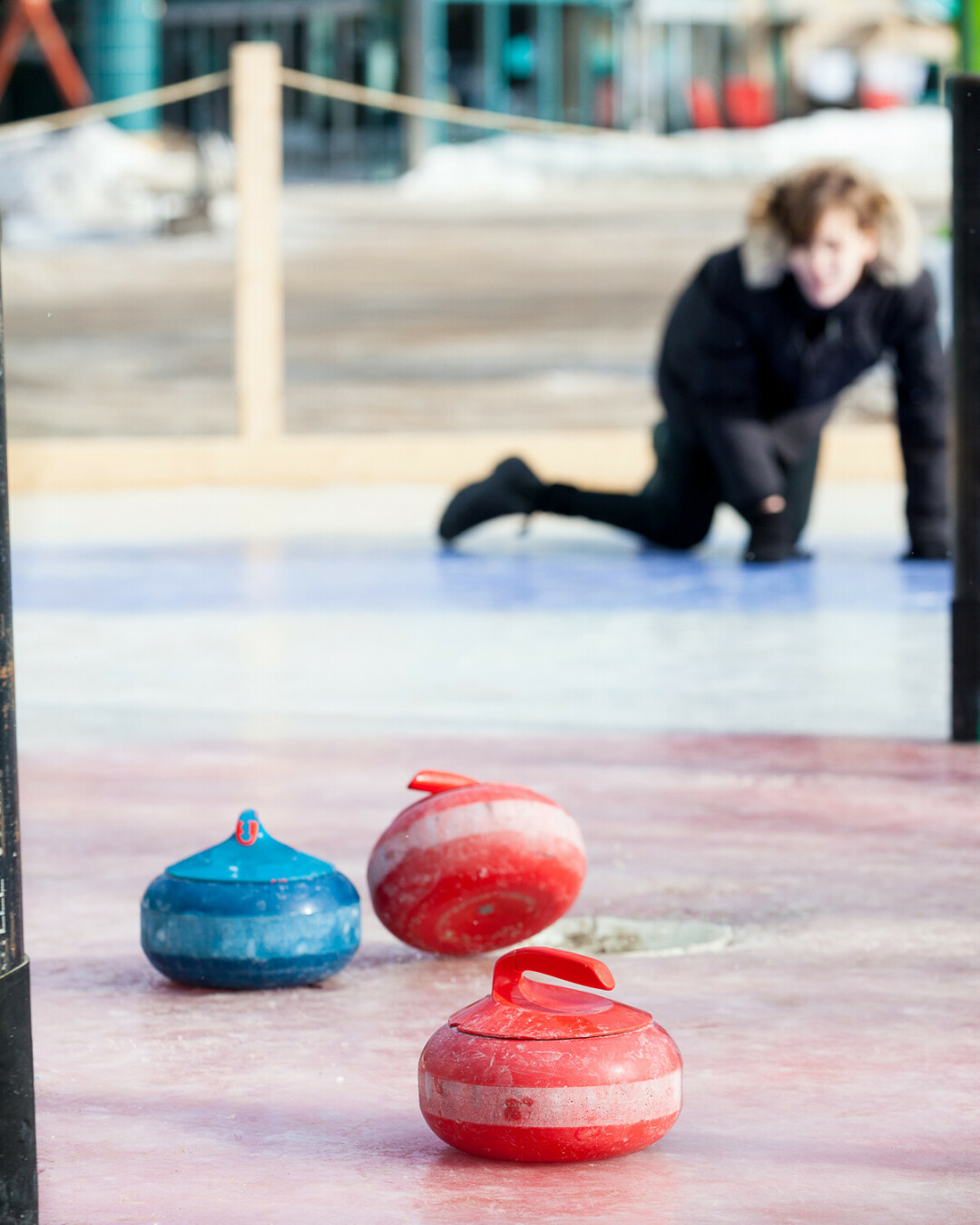 A crokicurl game in Winnipeg, Manitoba, where the sport was invented in 2017. (Submitted photo)

The sport has garnered increasing popularity throughout Canada amid the pandemic, as it’s the perfect sport for social distancing – and provides an excuse to get outside.

“You’re playing apart, but together,” Wreford said. “It’s just big enough that you’re not too close to people, and – during COVID – you can still play. But not too big that you still can’t have a conversation.”

The first rink was installed in 2017 in Winnipeg. “And then it really blew up from there,” Wreford said. The sport spread quickly to Manitoba, Calgary, Saskatchewan, New Brunswick, Nova Scotia, Toronto, and now the United States.

“It’s been amazing to have so much connection with people all over the country – and now the United States, too – who come together for similar reasons: To talk about how to get outside and do things in the winter and activate public spaces in the winter, which has been a tough thing for a long time,” she said.

City officials in Altoona reached out to experts from several Canadian cities and Wreford to learn more about the game before installing it in River Prairie.

“We didn’t have to do too much thinking about it,” said Roy Atkinson, management analyst for the City of Altoona. “We knew it would be a good fit.” 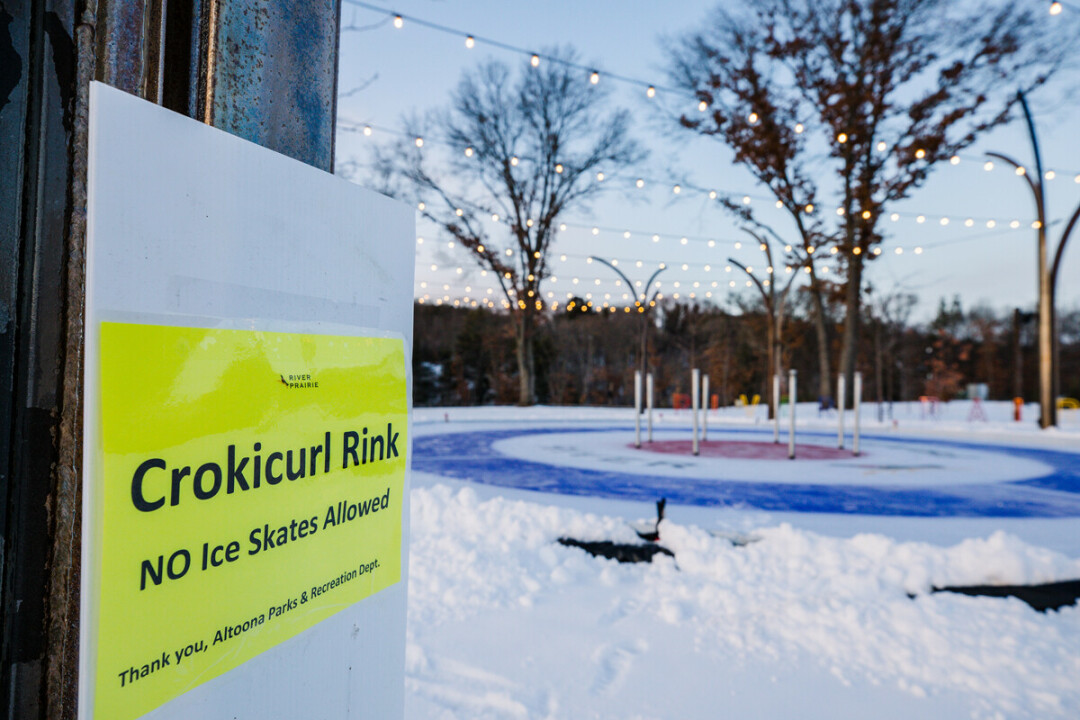 The first crokicurl tournament in the United States will be held in Altoona on Feb. 13. (Photo by Andrea Paulseth)

Get Ready, Get Set, Crokicurl!

If you’re ready to take a crack at crokicurling, you can register to be in the very first tournament in the United States on Feb. 13. And the best part is: You don’t need any experience.

“A lot of people have really good memories about outdoor curling or playing crokinole together or something, so there’s tons of stories that come out,” Wreford said. “We’ve found it to be such an instigator of creating community and social connections.”

Altoona will host its second annual Frosty Fun recreation series throughout February, which will include a Candlelight Snowshoe Hike, Lions Club Ice Fishing Classic, Rays of Sunshine Find at River Prairie Park, Frosty Toona Fat Tire Race, Jelly Bean Hill Challenge, and the inaugural crokicurl tournament, which is tentatively scheduled for Saturday, Feb. 13, with registration at 11am and crokicurling starting at noon.

“It’s just fun,” Golat said. “Anyone can play. Kids can play, adults. It can be fun, but it can be very competitive.”

Keep up to date with the rink at the River Prairie at www.facebook.com/RiverPrairie or at the City of Altoona's website at www.ci.altoona.wi.us. Hold onto your seatbelts, as they plan to release a how-to video with tips for beginning crokicurlers soon.

You can also try crokicurl for the first time on Feb. 2 in River Prairie Park from 6-8pm. This pop-up event will show off the snazzy new rink to all who are interested. It's located on Front Porch Plaza. Please remember to wear a mask!