pledge comes from a familiar name in local philanthropy 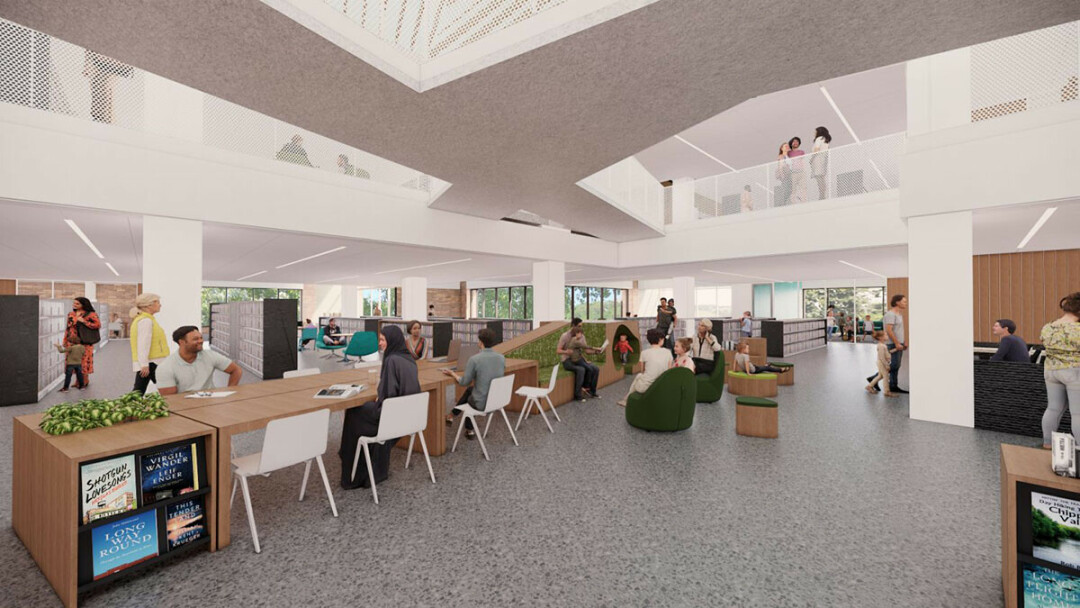 A sizable donation from the L.E. Phillips Family Foundation has pushed the library that bears his name toward the finish line of its multimillion-dollar fundraising campaign.

The pledge is the largest in the library’s history and brings the campaign to 93% of the project’s total $18.5 million price tag. Of that total, $11.5 million has been budgeted by the city to renovate the aging library’s mechanical systems, while another $7 million is being raised from private donors to remodel and expand the library’s space, including the addition of a third floor.

While L.E. Phillips – a prominent Eau Claire businessman who served as president of National Presto Industries – died in 1979, his name lives on in the community in part because of donations from his family’s foundation toward numerous projects. Notably, a $320,000 donation to the library in 1974 secured naming rights for the building when it first opened in 1976.

"As president of National Presto Industries, my grandfather, Lew Phillips, was committed to making Eau Claire a desirable place to work and live to both attract and retain employees,” Maryjo Cohen, president of the L.E. Phillips Family Foundation, said in a media release. “He also believed strongly in assisting significant projects that had widespread community support. The contribution to the library’s renovation and expansion is consistent with that philosophy.”

Library Board President and Story Builder Campaign Co-Chair Bob Eierman said the library pledged to “make the best possible use of this investment” in the construction project, which is expected to begin in May.

“This gift is a cornerstone contribution to the Story Builder campaign,” Eierman said. “We are excited and gratified that that L.E. Phillips family will continue their strong support for the library. With our other major donors and almost 600 community members, Eau Claire has demonstrated its willingness to make a major financial investment in the future of the library.”

Learn more about the project, the donation, and Phillips himself in the full media release here:

The L.E. Phillips Memorial Public Library in downtown Eau Claire and its Story Builder expansion campaign are exceedingly honored to announce their acceptance of a $1.5M gift from The L. E. Phillips Family Foundation. A critical step to achieving the campaign’s fundraising goals, the Library Board voted to accept the donation on Thursday, January 21. As the campaign’s lead gift, this is the largest pledge in the history of the library, and it brings funding to almost 93% of the total project cost ($18.5M).

The City of Eau Claire has invested $11.5M to renovate the library’s failing mechanical systems while the Story Builder campaign is raising an additional $7M in private funds to expand and enhance the library’s physical space—a long overdue effort to meet the demands of Eau Claire’s ever-growing and evolving population.

Given the campaign’s tremendous fundraising momentum over the past year, bolstered by this most recent gift, library leadership is excited to share that construction work will begin in May of this year.

The name “L. E. Phillips” is synonymous with philanthropy in the Chippewa Valley and with the library itself. The L. E. Phillips Family Foundation, which was established by the prominent local businessman Lewis E. Phillips, originally secured naming rights to the Eau Claire Public Library with a $320,000 donation in 1974. This contribution was crucial to funding the library’s new location at 400 Eau Claire Street, where it remains today. Opened in 1976 and renamed in his memory after his death in 1979, the L.E. Phillips Memorial Public Library has since become the most visited building in Eau Claire’s downtown area, typically welcoming about 400,000 visitors a year.

With its $1.5M lead gift, the L. E. Phillips Family Foundation has reaffirmed its longstanding commitment to the library, securing naming rights for the building for as long as it remains on its current site. The library will also house a permanent display honoring L. E. Phillips and his contributions to the Eau Claire community.

Maryjo Cohen, President of the L.E. Phillips Family Foundation commented, "As president of National Presto Industries, my grandfather, Lew Phillips, was committed to making Eau Claire a desirable place to work and live to both attract and retain employees. He also believed strongly in assisting significant projects that had widespread community support. The contribution to the library's renovation and expansion is consistent with that philosophy.”

She also stated, “We are particularly pleased by the planned permanent tribute at the library that will celebrate Lew Philips’ truly remarkable history and generous legacy. Born in Lithuania in 1899, Phillips and his family came to the U.S. as impoverished immigrants in 1901 and settled in Manitowoc, Wisconsin. Life was a struggle. Lewis and his brother took on a variety of odd jobs as children in order to put food on the table. As teenagers, they started Ed Phillips & Sons, a wholesale business. The business ultimately became a major success with multiple locations in the Midwest. At the behest of city officials, Phillips and his brother purchased a major stock interest in National Presto Industries, Inc. That purchase made it possible for the business to remain in Eau Claire.”

Ms. Cohen then provided background information on the L. E. Phillips Family Foundation itself, stating “My grandfather setup his foundation in 1942. That foundation has since provided key funding for many community educational, health, and recreational activities that not only include the library but also the following: the science building, recital hall, and organ at the University of Wisconsin–Eau Claire; the Libertas Center for the treatment of addiction in Chippewa Falls; the Sacred Heart CT scanner and building; the Sacred Heart Rehabilitation Unit; the portable EKG monitors/emergency room receivers that are carried in Eau Claire Fire Department rescue vehicles; the Fire Safety Center and Service and Health Career Building at the Chippewa Valley Technical College; the YMCA’s Camp Manitou Lodge Building; the Boy Scout Camp in Haugen, Wisconsin; the Senior Center; and the Career Development Center.”

Library Board President and Story Builder Campaign Co-Chair Bob Eierman says, “This gift is a cornerstone contribution to the Story Builder campaign. We are excited and gratified that that L. E. Phillips family will continue their strong support for the library. With our other major donors and almost 600 community members, Eau Claire has demonstrated its willingness to make a major financial investment in the future of the library. The L.E. Phillips Memorial Public Library pledges to make the best possible use of this investment to advance our mission to support lifelong learning in this community by providing the library it needs and deserves.”

Funded by private donations such as this, the library’s expansion plans are designed to enhance core services. For example, an all-new third-floor event room will double community engagement space, offering expanded programming for all ages. Modernized study rooms will help individuals and groups to work, study, and meet. Redesigned shelving and display space will offer unprecedented physical access. And a new drive-up window will ease materials pickup. Beyond these essential enhancements, the expansion project dovetails with the city’s upcoming plans to construct an urban plaza between the library and City Hall.

With construction beginning in May, campaign leadership is confident this week’s $1.5M pledge will provide the catalyst needed to secure full funding in these final months. Anyone interested in learning more about the expansion campaign should visit www.ecpubliclibrary.info/storybuilder.

For other library information, people may contact Information & Reference by calling 715-839-5004, emailing librarian@eauclaire.lib.wi.us, or chatting with staff via the library’s website at www.ecpubliclibrary.info.