Biden Joins List of Presidents Who Have Visited the Valley

(well, he wasn’t president at the time, but we’re still going to count it) 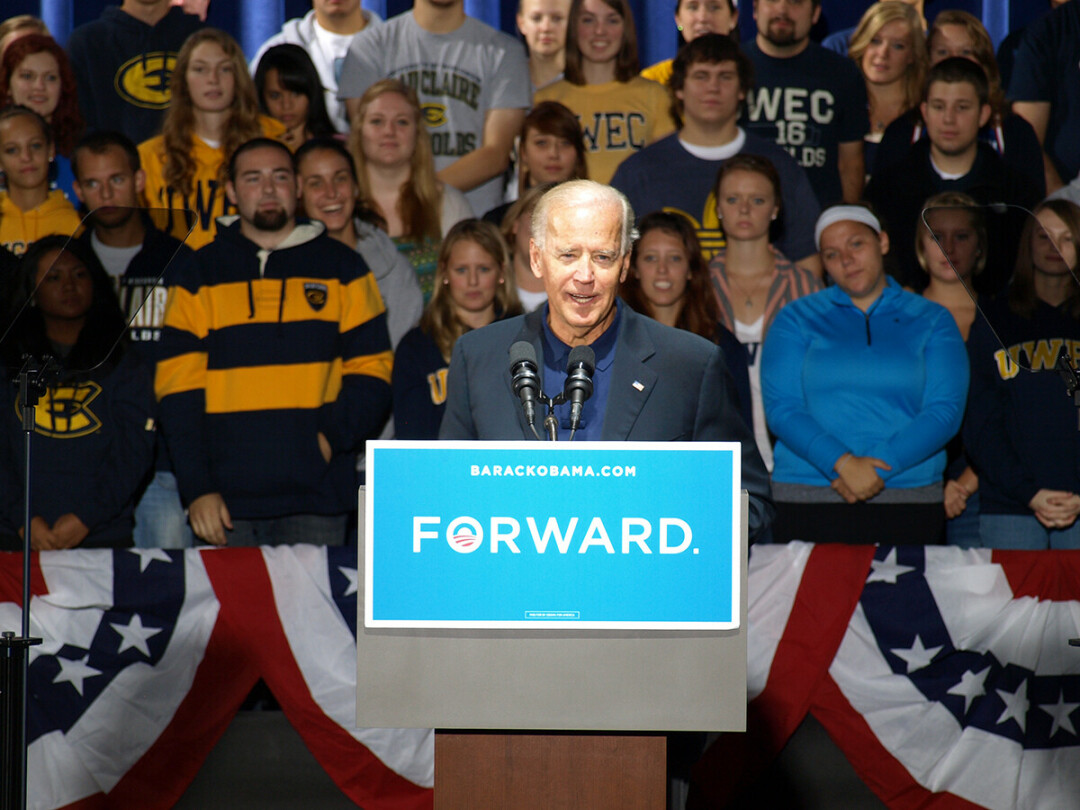 As soon as Joe Biden takes the oath of office on Tuesday, Jan. 20, Chippewa Valley trivia buffs can say that yet another United States president has visited our little corner of the country.

Sure, Biden wasn’t president (yet) when he came to town back in 2012: He was vice president, and that campaign season brought him to Eau Claire to stump for his top-of-the-ticket running mate, Barack Obama. However, if you’re keeping track of which future, current, and former leaders of the free world have visited the Chippewa Valley, Biden’s visit certainly warrants a mention.

As The Associated Press reported, “Speaking to a crowd estimated by local fire officials at 3,000 people, Biden highlighted tax credits, grant programs and other moves by the Obama administration to defray college costs and increase spending that schools could use to hire more teachers. He portrayed Republican presidential challenger Mitt Romney and running mate Rep. Paul Ryan as hostile to those programs.”

(Another bit of presidential trivia: Ryan, then a Wisconsin congressman, is the only person from the Badger State ever included on a major party presidential ticket. Biden and Obama ended up winning re-election in 2012, and a few years later Ryan became speaker of the House of Representatives.)

“This country, all of you, have been through an awful lot in the last four years,” Biden told the Eau Claire crowd that day. “But like all throughout our history, Americans haven’t lost faith. You fought back. You didn’t give up, you got up. And you know as well as I do there is no quit in America.”

Biden joins a long list of chief executives who’ve stumped in the Chippewa Valley. For instance, his predecessor, Donald Trump, came to Eau Claire twice during his successful 2016 campaign. Here are some other notable presidential visits:

The younger President Bush is the most recent sitting president to have visited the Chippewa Valley. During his 2004 re-election campaign, Bush was in the area twice. On Aug. 18, he traveled through the region by bus, giving a speech at Kell Container Corp. in Chippewa Falls, making an unannounced stop at the Cady Cheese Factory near Wilson, and chatting with Kansas City Chiefs players at their training camp in River Falls. On Oct. 20, he returned for an event with supporters at J&D Manufacturing in Altoona. Bush ended up narrowly losing Wisconsin’s electoral votes to Democrat John Kerry.

The elder Bush also stumped in the Valley while seeking a second term in 1992. During an old-fashioned whistle-stop train tour, Bush spoke to supporters in Chippewa Falls on Halloween that year. “If a couple of yuppies dressed as moderates come to your door, bags in hand, give them some candy, but watch your wallet,” he quipped about his opponents, Bill Clinton and Al Gore. Those “yuppies” had the last laugh, winning Wisconsin and the White House a few days later.

Before Bush Sr., you have to dial the clock back 60 years to find a president who visited the region while still in office. On Nov. 5, 1932, Herbert Hoover spoke briefly from the rear platform of a train to a crowd in Eau Claire. And when we say briefly, we mean briefly: The transcript is only three paragraphs long, with the apologetic president saying he was saving his voice for a big speech in St. Paul. Hoover might as well have stayed on the train: He lost to Franklin D. Roosevelt by a two-to-one margin in Wisconsin and by a similar landslide nationwide.

Biden’s old running mate visited in Eau Claire, too –also before he was elected. Way back in 2008, the then-senator from Illinois visited Eau Claire twice: First for a big rally at Zorn Arena on Feb. 16 and again on Aug. 24, when he attended Sunday service at First Lutheran Church and joined supporters for a barbecue in Rod & Gun Park. Wisconsin swung Obama’s way that fall and again in 2012.

Wisconsin’s 1960 Democratic presidential primary was a critical one, pitting Kennedy against Hubert Humphrey, who was assumed to have an advantage because he was from neighboring Minnesota. Kennedy visited the Chippewa Valley repeatedly, making speeches on the Wisconsin State College campus on Nov. 12, 1959, and at the Elks Club on Feb. 26, 1960. JFK also visited Chippewa Falls, Bloomer, Menomonie, Durand, Mondovi, and the Eleva-Strum area. He ended up winning the primary that spring, although he lost Wisconsin in the fall. (Check out B.J. Hollars’ 2020 feature article on JFK’s visit and the man who guided him around western Wisconsin.)