EC Library Sets Sights on South Side – But Only Temporarily 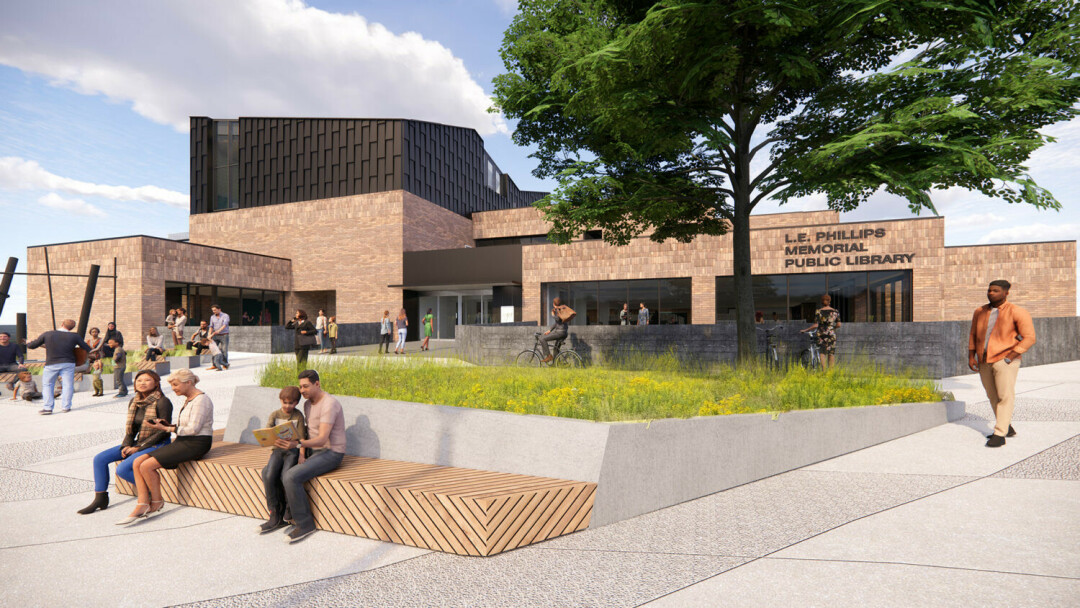 A rendering of what the L.E. Phillips Memorial Public Library will look like after a planned remodeling and expansion project. (Submitted image)

The L.E. Phillips Memorial Public Library will relocate to a different – but temporary – home next year when its long-awaited, $18.5 million reconstruction and expansion project begins in May.

The library announced Thursday that it has signed leases to move into two temporary spaces on Mall Drive when the expansion project kicks off. The larger of the two sites, 2725 Mall Drive, will be used “for all public services, including in-person collection browsing and materials pick up/drop off, as well as office space,” a library media release stated. The building, which will be leased from Greenpoint Properties, partially occupied by United Health.

Here are some details about the temporary space:

MSR Design (the Minneapolis architecture firm handling the library’s redesign and expansion plans) has been contracted to create an efficient and welcoming layout for the temporary library space. MSR is already familiar with the library’s current space, equipment, and customer service needs.

The library is currently requesting proposals from companies able to facilitate this complex transition—packing, transporting, and setting up three floors worth of materials, shelving, equipment, and more. In the coming weeks, the library will release more details concerning specific moving and reopening dates, temporary operating systems, and service adaptations.

According to the media release, the existing library will be vacated by May 1. After that, a roughly 14-month reconstruction project, including the addition of a third floor, will begin. The library is expected to reopen in the fall of 2022. The entire project will cost an estimated $18.5 million, including $11.5 million (already budgeted by the City of Eau Claire) for mechanical systems upgrades to the 44-year-old building.

The remaining $7 million will come from private sources via the library’s Story Builder fundraising campaign. Roughly $4 million has been raised already, the library said. According to the media release:

Beyond these essential enhancements, the expansion project dovetails with the City of Eau Claire’s upcoming plans to construct an urban plaza between the library and City Hall. A public input survey for the plaza can be found at www.eauclairewi.gov/government/our-divisions/engineering/engagement-surveys.

“Despite all the challenges we’ve faced in 2020, the library community (staff, volunteers, donors, and customers) has shown their tenacity, adaptability, and dedication to one another and to the concept of a library as a community hub and information center for all people,” said Library Director Pamela Westby. “Seeing the generous financial support lent to the Story Builder campaign has been amazing. We can’t wait to launch the reconstruction this spring and get going on a new era for this library that will help build a better future for the Eau Claire region.”

More information about the library’s Story Builder campaign can be found at www.ecpubliclibrary.info/storybuilder.