'Pinch' is a film about two strangers who are vying for the same piece of sports memorabilia. The pair decide to play a game of baseball to settle the competition, and their friendship ensues from there. 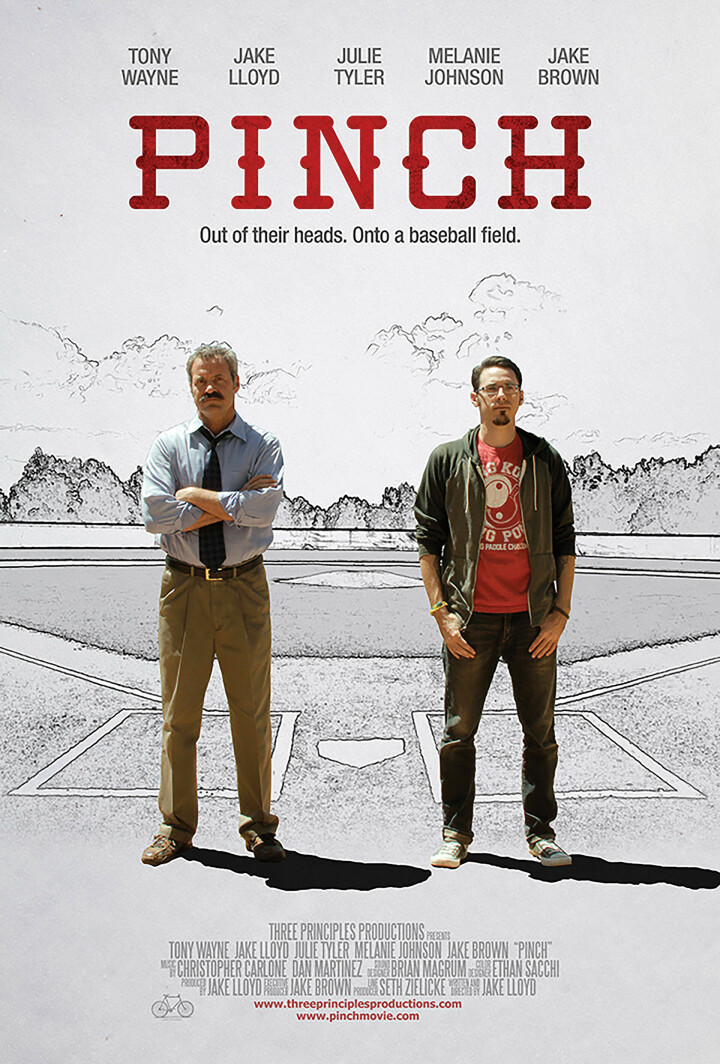 Pinch is a film about two strangers who are vying for the same piece of sports memorabilia. The pair decide to play a game of baseball to settle the competition, and their friendship ensues from there. Many viewers describe the film as the plot of The Sandlot when the kids grow up. But, the experiences on-screen are remarkably similar to the creators’ lives off-screen.

Actor Anthony Duerkop (a.k.a. “Tony Wayne”) met director Jake Lloyd in Los Angeles on the set of 24 in its final season. The pair immediately hit it off. “We’ve become as close as close can be,” Lloyd said. “We have the same sensibilities. … Tony is just sort of my guy.”

After the duo attended the Prairie Gate Literary Festival as guest speakers on screenwriting, Lloyd was inspired to write his own film. “There’s no excuse anymore,” he reflected. “It’s way too easy to make something nowadays.”

Written in a matter of five days, Pinch follows similar life experience as Lloyd and Wayne – two strangers who hit it off immediately. From there, production moved quickly, the pair said. Most of their actors volunteered to be a part of the film, so scheduling turned into a nightmare, Lloyd said. Out of 420-some days of working on the film, 60 of the days were spent actually filming – but this worked well for Lloyd, since he could edit as they went on. Since it was a fairly low-budget film, the duo filmed most things “guerilla-style,” or finding places throughout Los Angeles to film as they could.

“I could not call the shots,” Lloyd said. “I had to allow the shots to be called.”

Among the biggest inspirations for the film was Anthony Duerkop's (a.k.a. “Tony Wayne”) childhood in the Chippewa Valley. Born and raised in Eau Claire, Wayne attended UW-Eau Claire as a theater student.

Among the biggest inspirations for the film was Wayne’s childhood in the Chippewa Valley. Born and raised in Eau Claire, Wayne attended UW-Eau Claire as a theater student. Before he graduated, he received the opportunity of a lifetime: he was accepted by a small studio in New York, where he trained as an actor. “It was a huge culture shock to me,” Wayne said.

He later returned to Eau Claire for three years, in which time he helped create the Bare Bones Theater Company and taught theater classes at the university. Pinch was his first full film, he said, which posed exciting challenges for the actor.

After finishing the film, the pair toured the country for film festival screenings, where many audience members felt its emotional impact.

“I like to think that Pinch is just a sliver of life,” Lloyd said. “There’s a lot of really relatable, really human emotion.”

The weirdest experience for Lloyd was screening in Eau Claire at the Eau Claire International Film Festival. “It always gets a weird reaction because everyone knows Tony,” he laughed. But, he said, “He’s one of the most talented actors.”

The film is now available to stream on Amazon Prime. “In the world of social distancing and in the world of people feeling stuck in their homes,” Lloyd said, “I really wanted to get the movie out there.”

You can see a sneak preview of Pinch on YouTube or stream it via Amazon Prime.