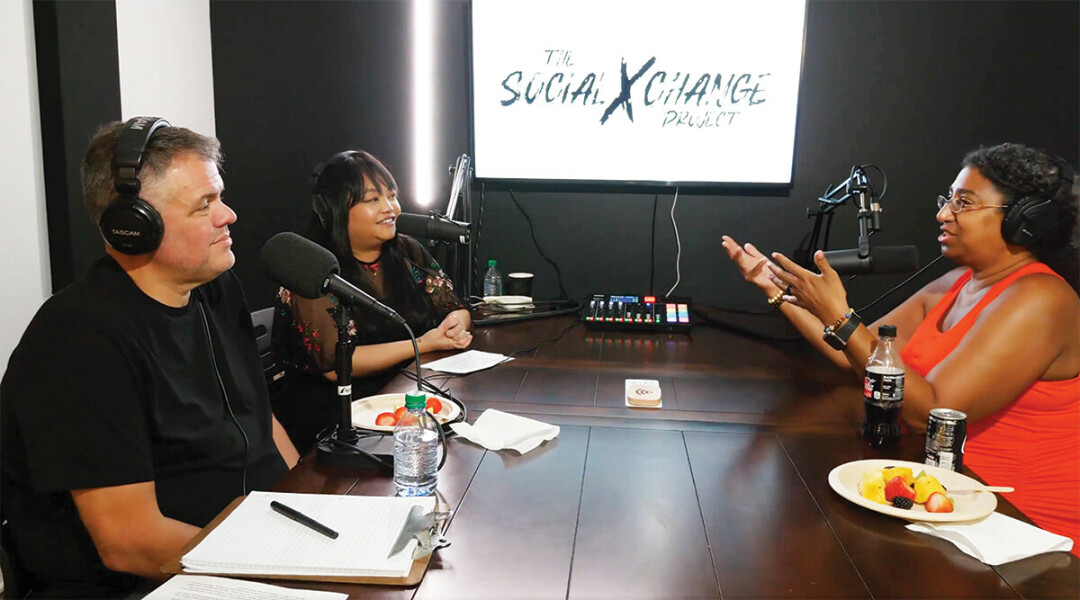 LOVE, PASSION, AND CURIOSITY. Local podcaster Sheng Lor Waldinger, center, always strives to learn something new – especially through conversation with others. Here, she talks with Ed Hudgins, left, and Selika Ducksworth-Lawton of Conversations in Color.

If you know Sheng Lor Waldinger, then you know that she’s a people person. And it’s her passion for others that inspired her to start her bimonthly podcast, Social X Change Project, which gives local folks an opportunity to share their stories.

“I want people to see that what I’m trying to achieve on my end is something good, something that I believe (in), and something based out of passion,” said Waldinger, who works for a state program helping low-income families find employment.

The podcast originally launched in December with the help of one of Waldinger’s friends. But Waldinger felt their project – which started out just for fun – was going in a direction that needed more energy and time, so her friend decided to retire from the podcast, while Waldinger relaunched a second season of the podcast as the Social X Change Project. The name was inspired by the confident and empowering Chloe x Halle duo – R&B artists – as well as the idea of “social exchange” and “social change.” “The ‘X’ started to represent our podcast brand,” she said.

“I want people to see that what
I’m trying to achieve on my end is something good,
something that I believe (in),
and something based out of passion.
– Sheng Lor Waldinger,
host of Social X Change Project

By the end of March, Waldinger had to stop booking people for her show because she was feeling overwhelmed by the enthusiasm for her podcast, she said. “For me, it activated so many nodes of like, this is what I want to do,” she said.

The podcast is produced with the help of CoLab and Ivy Media, Waldinger said, and 22 episodes have already been recorded. Topics vary, but the guests and subjects all revolve around three core characteristics: entertainment, education, and impact. Waldinger, who studied experimental psychology as an undergraduate student and loves testing theories and making sense of things, loves to connect with other people while expressing her more creative side.

“There are so many things I love about her,” said friend Beth Crowell. “She’s not very risk-averse, but she is so willing to learn.”

Crowell met Waldinger through Crowell’s work at the Small Business Development Center when Waldinger wanted advice on an entrepreneurial venture. In talking with Waldinger, Crowell discovered that Sheng didn’t really have the dream of starting a business; she wanted to create a space for people to connect and have a positive impact on their community.

“When I think about this podcast for her,” Crowell said, “it’s perfect.”

Some of the topics of Waldinger’s podcast include discussions of Hmong women in the beauty business and mental health among Hmong people – though those topics are only two of many. She most recently hosted Dr. Selika Ducksworth-Lawton and Ed Hudgins from the local Converge Radio and Pablo Center series Conversations in Color and Dennis Beale from the Power of Perception mentoring program on her show in light of their work in the community. Waldinger seeks to create diverse content – which is not an ideal business plan, she said, because most good businesses target their content to a niche audience. But that’s not her goal here.

“For me, it’s not like that,” she said. “I want everybody to watch an episode that they connect with. Not every episode because not everybody is going to like every single person or every topic that we talk about. But the ones that they do like, when they listen, there’s a thought that’s provoked.”

The podcast isn’t Waldinger’s only passion project. She’s also highly involved in the Chippewa Valley community as a part of the Equity, Diversity, and Inclusion subcommittee of the Eau Claire Area Chamber of Commerce and a committee for 1 Million Cups. She also helps produce Conversations in Color, with the goal of eventually being a host. When it comes to balancing all of these priorities? “I have zero clue,” Waldinger laughed. “I’m just kidding. I really am very organized.”

She stays organized with a Google calendar that she says is her “life.” Her brain, she says, is a “very chaotic place.”

“I don’t want to be burned out,” she said. “It’s not worth it if you’re going to be committing to something that you’re not even mentally and emotionally invested in anymore because you’re so burned out.”

Overall, Waldinger wants people tuning in to know that her podcast is made with love, passion, and curiosity.

You can check out the Social X Change Project podcast at facebook.com/thesocialxchangeproject.