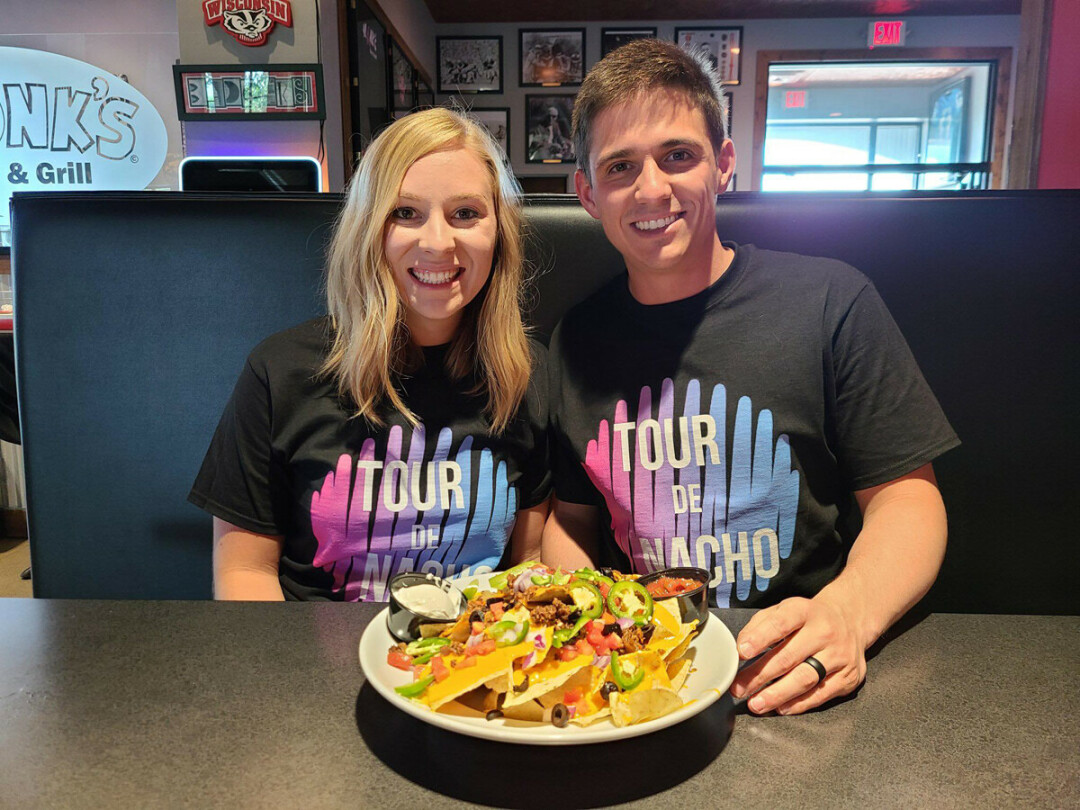 ADVENTURES IN QUESO. Rachael and Parker LeMire, shown here at Monk's Bar & Grill in Eau Claire, are on a mission to try and rank all the nachos in Eau Claire and Altoona. (Submitted photo)

When life gives you lemons, eat some nachos. Or at least that’s what Parker and Rachael LeMire – high school sweethearts-turned-Eau Claire couple – have done amid the global pandemic: eat some good nachos. And rate them. And then search for their next great nacho.

They film all of their adventures in a hilarious comedic adventure they’ve called “Tour de Nacho” with the goal to find the best nachos in Eau Claire and Altoona, all while supporting some great local restaurants in the meantime. 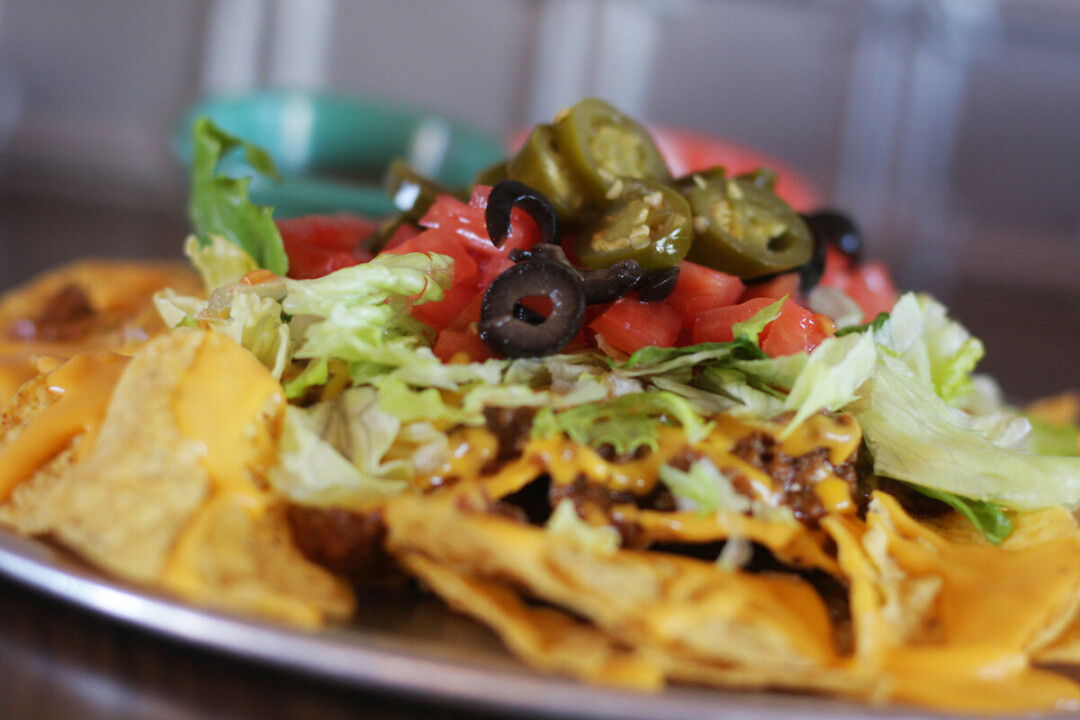 The couple has slated 22 different places between Eau Claire and Altoona, aiming to try a new place at least once or twice a week. They begin their adventure by hopping in their truck, start driving about a mile, and then ask Siri to pick a number between one and 22. They then match up the number to the restaurant with a corresponding number to figure out which nacho restaurant they’ll stop by that day. They wanted to hit all the best Chippewa Valley nacho spots, they said, but didn’t realize just how many nachos that would mean! So, they decided to stick to Eau Claire and Altoona for the time being.

They rate their nachos on a scale of zero to six (since zero to five can’t fully encapsulate an incredible nacho) in terms of 10 different categories: presentation, variety of meats, sustainability (how well does it hold together?), atmosphere (how inviting is it?), quantity of nachos (are you full after eating all the nachos?), queso (“the most important part,” according to Rachael LeMire), variety of non-meats, chip-to-content ratio (“No one likes to eat a chip with nothing on it,” she said.), and finally worth (is it worth the amount of money it costs?). They also have the requirement that when they approach the counter to order, they have to simply ask for nachos. If the restaurant employee asks what they want on their nacho, they have to say “yes” to everything.

They’ve posted their delicious videos on their social media pages as well as on their public Instagram, @tour_de_nacho.

“We were shocked by how many people liked it,” Rachael LeMire said.

So far, the pair has visited five nacho-average-locations with 16 more to go. When asked if they’re sick of nachos yet, the pair responded with a resounding “no”!

“Not even close,” Parker LeMire said. They aim to keep a positive spin on all of their nacho reviews, even if one nacho outranks another, they said. As restaurants struggle during these tough times, they said they want to offer the marketing of their videos to help out the restaurants while eating some great food.

To be sure they’re staying safe during a pandemic, the pair said they make sure to check a restaurant’s expectations about COVID (such as whether to wear a mask, whether they are open, if they offer dine-in options, if they have outdoor patio options, etc.). “We try our best to respect everyone else and to do our part,” Parker LeMire said. 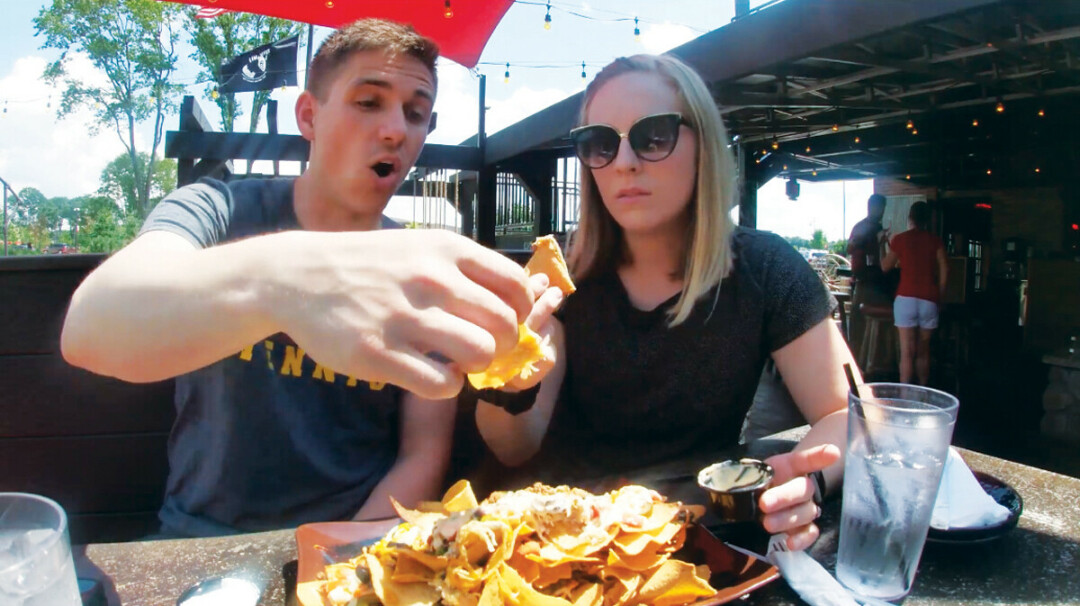 The couple chow down on nachos at Cowboy Jack's in Altoona. (Submitted photo)

They recently ordered “Tour de Nacho” T-shirts to spread joy, which are available to order through their Instagram page. They also accept guests on their adventure, inviting friends to share their joy.

When it comes to finding your own joy amid a pandemic, the pair recommend finding something – however obscure – that makes you happy.