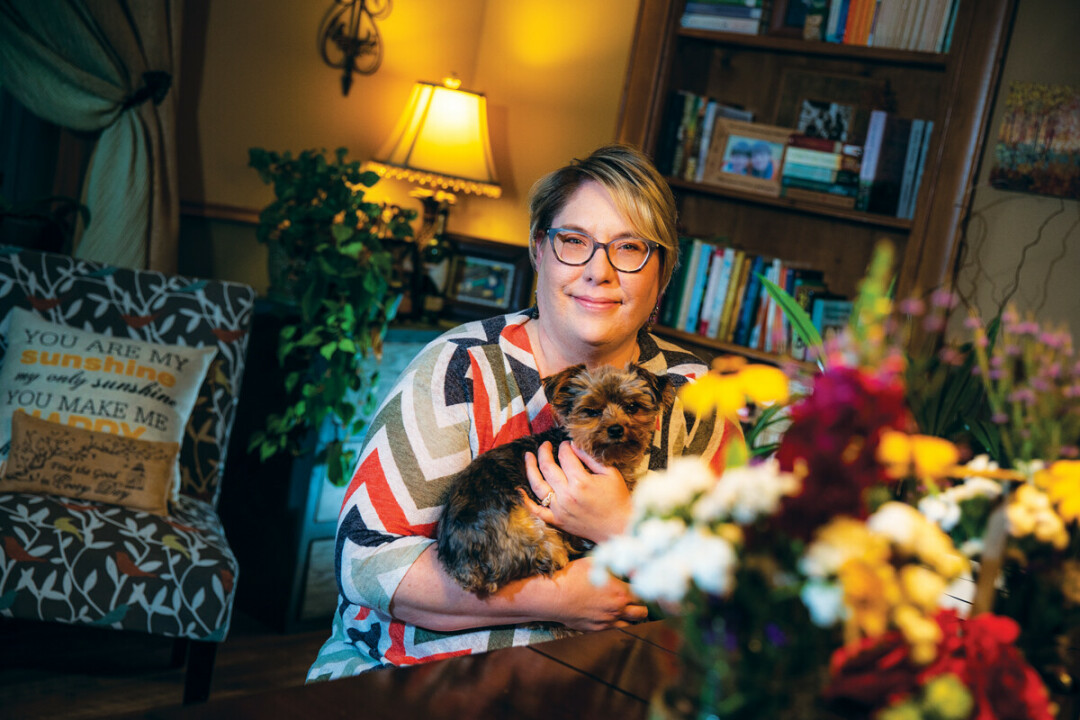 Jenny Knipfer woke up one day in 2014 to find that her toes were numb. The following day, she woke up to numb legs. Then the next day, the numbness had made its way to her midriff. That’s when she made an appointment with a neurologist. “I had really become my own best advocate,” Knipfer recalled. The doctor was initially going to pat her on the head and send her home with a handful of medicine, she said, but she knew something was seriously wrong. An MRI scan revealed brain lesions – a result of Multiple Sclerosis, a disease in which one’s immune system attacks  myelin, the soft sheath of proteins and phospholipids protecting nerve fibers, and causes communication issues from the central nervous system to the rest of the body.

In the case of Knipfer, an Elk Mound resident, this meant quitting her job at a florist’s shop in 2018 and beginning to experience horrific migraines – to the point where she couldn’t go anywhere or do much of anything – and a loss of movement. After a mixture of prayer, medicine, and natural remedies, the migraines are no longer a problem, but the loss of mobility makes it difficult – if not impossible – to write a book.

Nevertheless, she persisted. Using her iPad to type, Knipfer has published not one, not two, but three books, with a fourth, Harvest Moon, on its way around Thanksgiving.

Writing a book is like a miracle. It just poured right out of me.” –Jenny Knipfer, local author

“Writing a book is like a miracle,” Knipfer said. “It just poured right out of me.”

Carolyn Maves, Knipfer’s aunt by marriage, said the two have connected over the years through their shared love of reading. Since they live nearby, Knipfer started a book group – which Maves participated in – where a group of friends shared tea and cookies. Maves is Knipfer’s first reader and proofreader. She said she is captivated by Knipfer’s incredible ability to create meaningful characters, as well as her perseverance through personal challenges.

“I’ve always admired her as a woman,” Maves said. “She’s found different ways to be this creative person.”

Knipfer’s first novel, Ruby Moon – which considers the psychological ramifications a woman faces after accidentally killing someone – began nearly 20 years ago when Knipfer saw a red moon. Being a busy woman, and raising her children, she never had the time to write – until now.

Her second book, Blue Moon, plays upon the idiom “once in a blue moon,” and follows the story of twin sisters: what unites them and what divides them. “It’s really about forgiveness,” Knipfer said.

Her third book, Silver Moon, which was recently released, follows the story of the children from the first two books. It’s a historical fiction novel with multiple perspectives and multiple timelines, which can be a bit jarring for some readers. It takes place at the homefront and in the trenches of World War I from the perspective of Canada. Knipfer was inspired to challenge herself to write Canada’s perspective of the war because she had grown up walking the beaches of Lake Superior, collecting agates and interesting items at the lake.

“It really took a lot of research,” Knipfer said. “I’m not a historian, but I worked as a librarian … I love to learn.”

Knipfer begins her writing process with imagination, brainstorming different scenarios and how they will unfold. She hopes to ask readers to consider the hard questions, saying how she writes to inspire, encourage, and enjoy. She said she rarely struggles with writer’s block; when she does, she just gives herself time.

I know when my body is signaling to me to take a break. When I do feel nervous or upset, that’s when I just write for myself ... it’s just been really healing.” –Jenny Knipfer, local author

Time, in general, is something Knipfer often gives herself. As a writer with MS, Knipfer often has to take breaks from writing, busying herself by doing little chores or walking around the house. She tries to focus on each day as it comes, not worrying too much, and knowing when to take a rest.

“I know when my body is signaling to me to take a break,” Knipfer said. “When I do feel nervous or upset, that’s when I just write for myself ... it’s just been really healing.”

Knipfer’s books can be purchased through her blog, as well as at Bookends on Main in Menomonie and on Amazon.