Dinner at the Movies? WORK IN PROGRESS. The renovation looks scattered for now, with a port-a-john in the lobby and construction equipment on every floor, but once it’s done, the Downtown Cinema will be able to serve alcohol and food.

Right now, if you look through the glass front doors of Eau Claire’s Downtown Cinema, you’ll just see one sad, solitary port-a-john and not much else.

But beyond that, an exquisite renovation is underway as the twin-cinema mainstay tears down and expands its lobby area; completely updates both screens; adds spacier, cabaret-style seats; widens aisles; tightens some screws; and throws on a new coat of paint – to pump up the novelty of the act of going to a movie.

A rapidly-changing movie industry will make you do that.

For the last four years, the space has been one of the Micon Cinemas, owned by Mike and Connie Olson (thus, “Micon”). While showing us around the gutted theater Connie Olson said now that films hit video stores, Netflix, and video-on-demand far earlier than they used to, it’s smart for a second-run budget house to offer more reasons to see a movie in a theater, despite people maybe having more convenient access to it in their homes. 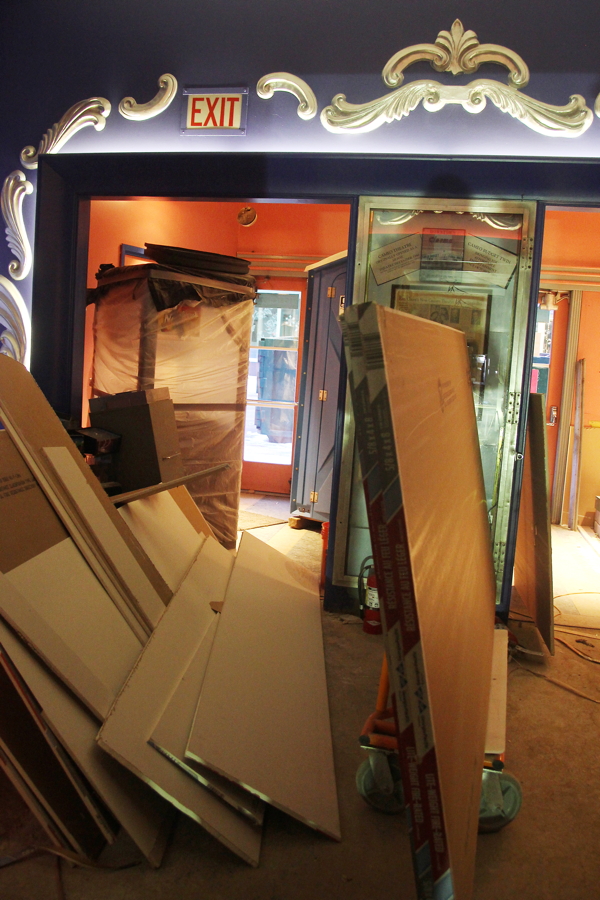 They, of course, will do that with – alongside the staggering floor-to-ceiling renovation – beer and pizza.

“You have to offer people something more,” Connie said. “We thought this concept would work.”

The renovation plans include adding a decent-sized kitchen to serve up hot ’za, flatbread, pulled pork, and other goodies to indulging movie-goers in search of a bite and a flick downtown. Of-age movie-lovers can enjoy beer and wine (to perhaps take a sip of every time Arnold Schwarzenegger looks distressed).

In the Valley, this is a new concept, since the state passed the required legislation to allow theaters the ability to obtain a class-B beer or liquor license only four years ago.

And, rest assured, the food’s gonna be good.

“People stop here at the theater and buy popcorn, because we still use real butter and coconut oil,” Olson said. “So we want to make sure we have a good pizza.”

For years, the Olsons have been trying and trying to get more independent, rare or award-winning films into the culture of the downtown spot, and Connie said with the new expansion and a slight rebrand, that’s only going to get easier.

Olson said more than anything else, the renovation and expansion allows the Cinema more opportunity and flexibility to pull off cool events, niche parties in the 50-seat upstairs screening room, Saturday morning cartoon blocks (complete with breakfast), and even – maybe someday – a film festival.

“There’s so much stuff that’s just out there,” she said. “We don’t know what it’ll end up being, but there’s more opportunity down here to do it.”

Big things are happening back there, and rest assured the port-a-john will be gone for their grand re-opening.